Little fish have it rough—there’s almost always a bigger fish ready to eat them. When it comes to surviving in the ocean, one of the best defenses is a great disguise. Here are 10 amazingly deceptive sea creatures. 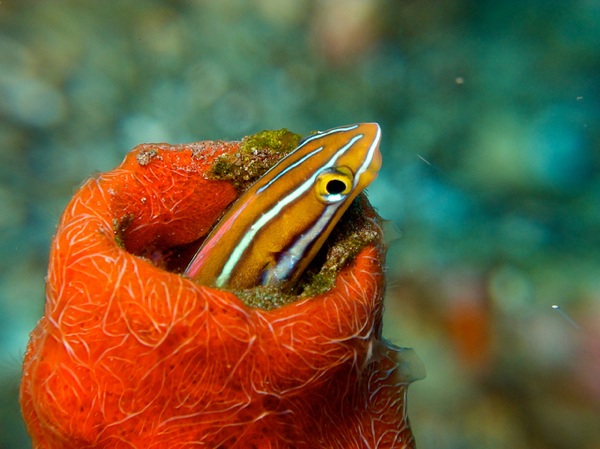 While a fangblenny sounds like it’s a toothy Irish fairytale character, it’s actually a small tropical fish that can change its color. Depending on what it’s trying to sneakily blend in as, it can change to olive, orange, black, or electric blue. The blue-striped fangblenny is a predator and could probably feed on some of the fish it blends in with, but they’re more valuable as camouflage than food. Instead, it will slip away from its less aggressive friends and take small bites out of larger fish in the reefs. 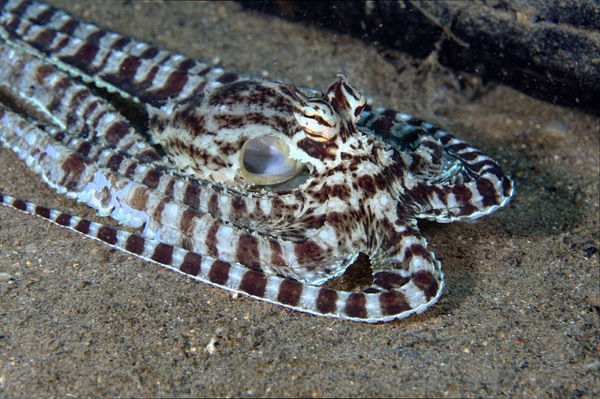 The mimic octopus puts the defenses of traditional squirt-and-run octopuses to shame. It can change its colors and even the shape of its body to mimic completely different sea species. It can mimic at least 15 species, including the poisonous banded sole, the lion fish, and sea snakes. By disguising itself as more threatening animals, the mimic octopus is able to scare away predators and move about the ocean freely. 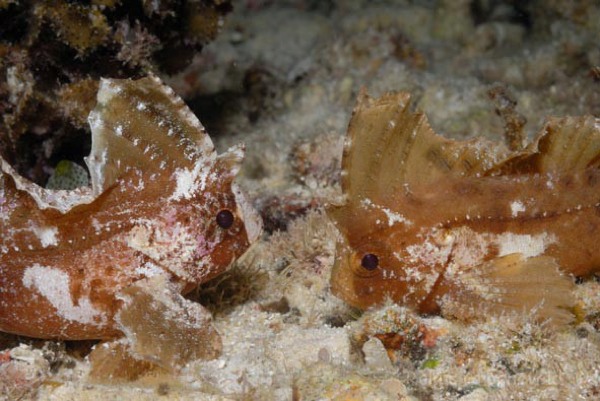 The cockatoo waspfish is one of the laziest fish in the ocean. While other fish need to find nooks and crannies to hide in, the cockatoo waspfish simply floats along with the current. Since its body resembles a dead leaf, it’s largely ignored by potential predators. 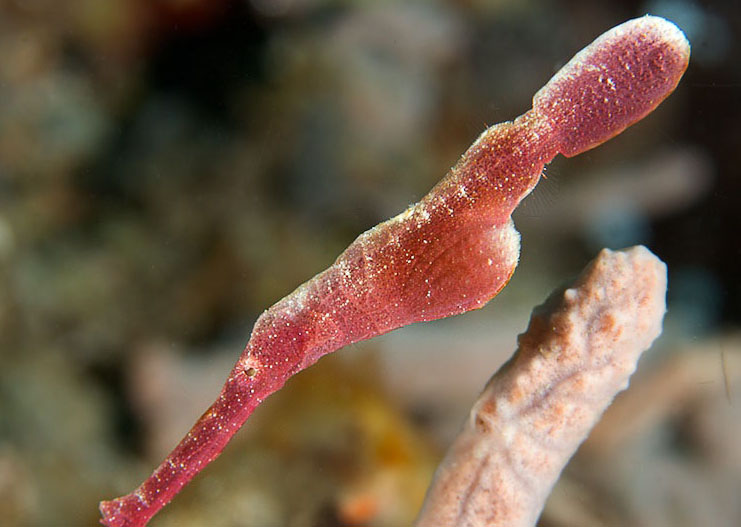 The ghost pipefish is related to the seahorse and closely resembles sea grass. Long, thin, and unsurprisingly pipe-like, this fish floats near the ocean floor. It doesn’t pursue food, preferring to suck in whatever tiny morsels happen to swim past its mouth. Generally, looking like grass is enough to keep a low profile, but as the ghost pipefish moves into a coral reef for breeding season, it slowly changes its color to match its new surroundings. 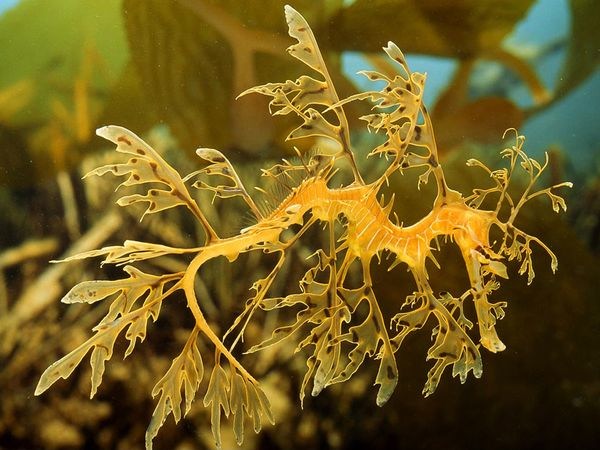 A big clue to predators that a given object would make a tasty meal is movement. To combat that, some of the leafy sea dragon’s fins are almost completely transparent, making it very difficult to tell when it’s moving. Its other fins look very similar to the seaweed it hangs out in, helping it hide from hungry predators. 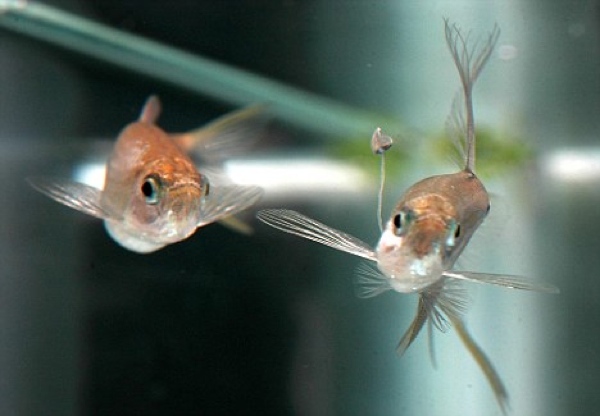 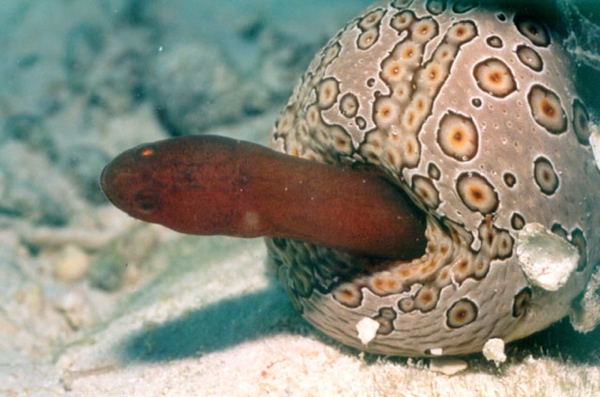 What’s better than coming up with your own disguise? Letting another animal do all the work for you, of course! Several varieties of pearlfish simply find a suitable sea cucumber, swim right up its anus, and make themselves at home. Sometimes, the fish will float around with just its head sticking out; other times, it dives all the way in to protect itself from nearby predators.

And some meals are provided on the house, as it were. Some pearlfish actually munch on their host’s internal organs, but as sea cucumbers can regrow damaged body parts, they don’t seem to mind too much. 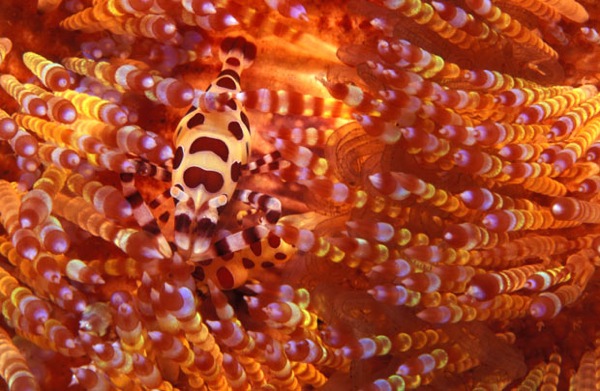 The Coleman shrimp looks very similar to the bright white and neon orange clownfish. Though clownfish tend to stick out while trying to hide in sea anemones, the anemones are dangerous to other intruders. The Coleman shrimp doesn’t hide among anemones, but it has another trick up its tail.

The fire urchin is a similar shade of neon orange and has dark blue spots that match patterns on the Coleman shrimp, allowing it to almost completely disappear from a predator’s view. And even if a predator does notice the shrimp, most sea creatures don’t mess with fire urchins.

Remember the mimic octopus we mentioned earlier? Scientists have also found a fish that mimics that octopus. While the mimic octopus is busy shape-shifting to look like a fish, the black marble jawfish sidles right up to the octopus and pretends to be one of its tentacles. The jawfish gets access to whatever meal the mimic octopus happens to be eating and gets a free eight-armed shield from predators. That’s living done right. 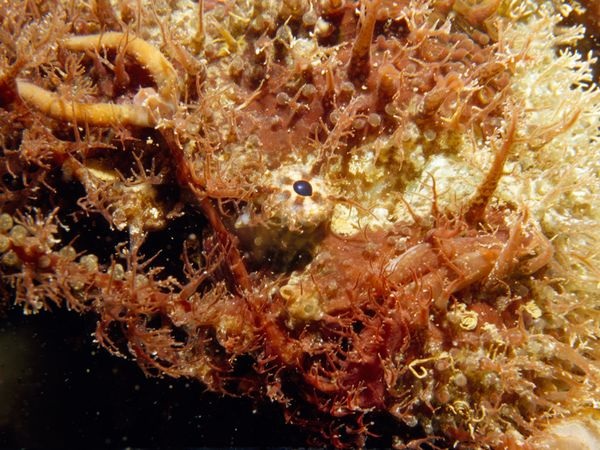 By combining incredible stealth abilities with incredible patience, the tasseled anglerfish is the reigning king of ocean camouflage. A little lure protrudes from its head and hangs right in front of its mouth, dangling like easy prey. Since it’s basically invisible already, it just floats along and waits for some poor, hungry fish to take a bite before chomping it down whole.