We are always fascinated and terrified of things we do not understand. Mysteries such as hauntings, murders, monsters, and abductions both creep us out and delight us as we attempt to find a rational explanation for what could be behind these baffling events. Here is a list of some truly strange unsolved occurrences which may never be fully understood or explained. 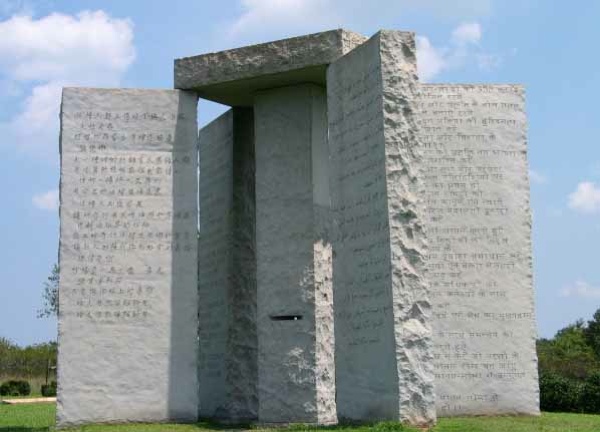 It’s amazing to think that one of the most mysterious monuments in the United States was built in 1979. After all, people must have had time to consult the man who built the Georgia Guidestones, right? Yet somehow, no one is entirely sure what exactly they mean. That’s probably due—in part—to the fact that this monument, often referred to as America’s Stonehenge, has a cryptic message engraved on it in eight different languages.

The Guidestones, which are in Elbert County, feature a message containing ten guidelines and there is an additional stone placed in the ground just a few feet away that runs down the astronomical features of the Guidestones, and claims that a time capsule is buried beneath the strange monument. However, there is no indication that such a capsule is actually there, or in fact has ever existed, and considering the man who originally commissioned the monument referred to himself simply as “Mr. Christian,” there is no indication as to what prompted the building of the Guidestones, or what their purpose truly is.

9
Purple Spheres of the Arizona Desert 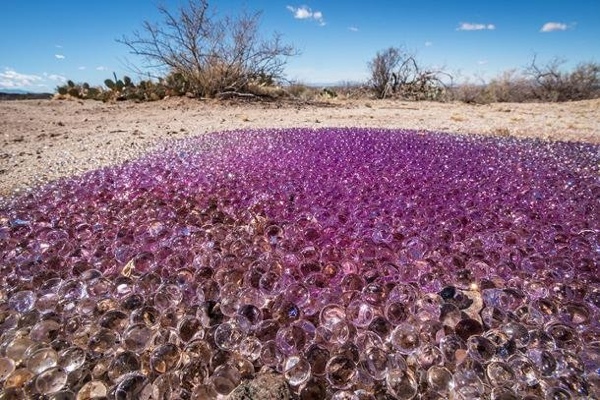 Early this year, a woman named Geraldine Vargas and her husband were walking through the desert near their home in Tucson, Arizona, when they came across a phenomenon that, so far, has completely baffled scientists. They discovered a large patch of land covered in strange, purple spheres with no perceivable explanation for what they were or how they came to be.

They appear to be a jelly-like fungus, but botanists in Arizona have so far been completely stumped as to their cause or composition. The spheres ooze a liquid substance and some people have speculated that they must be of an extraterrestrial origin considering nothing like them has ever been seen in the area, and no one has the slightest clue how they came to be there in the first place. 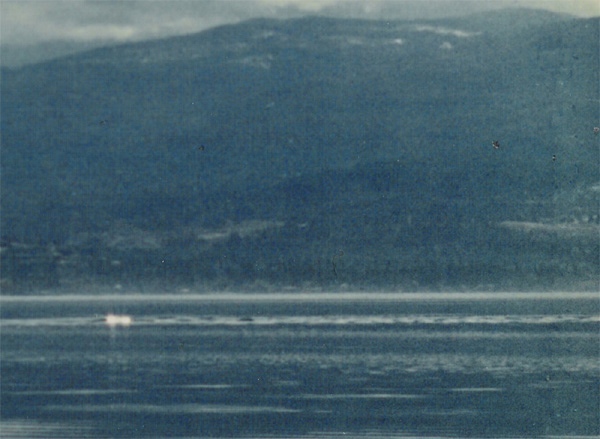 While everyone has heard of the Loch Ness Monster, not many have heard much, if anything, about Ogopogo. Ogopogo is a sea monster that can allegedly be found in Okanagan Lake in British Columbia, Canada, and every year there are reported sightings of the creature. Ogopogo is reported to be anywhere from 20–50 feet (6–15 meters) long, and the first reported sighting was all the way back in 1872.

Unlike other such creatures, Ogopogo is actually based in native folklore, which says that the local tribes would avoid certain areas of the lake, fearing the large monster dwelling there. When white settlers first arrived in the area, they were gradually convinced of the existence of the beast when, among other things, there was a report of horses being mysteriously pulled down into the abyss of the lake. 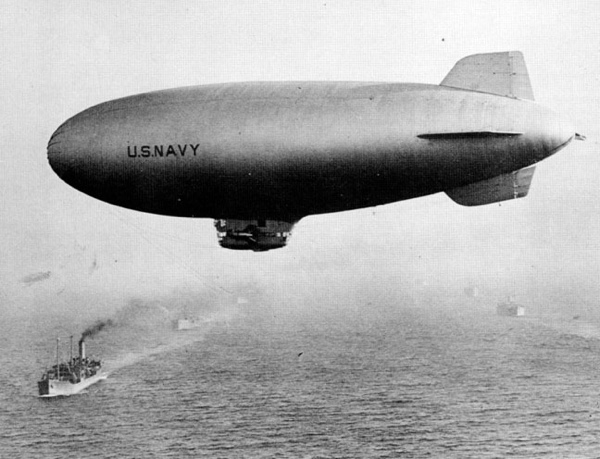 Back in the World War II era, blimps were a pretty commonly used form of air transportation. Quite often they were used for patrol missions, and while they served a very real and very important purpose chances are pretty good that when you think of blimps, all you think of is the Hindenburg, which crashed in 1937. Well, five years later there was another blimp mishap, only this one was a far more mysterious incident. After taking off with its two man crew, it returned without either pilot on board.

The airship L-8 was on a patrol off the coast of San Francisco one day in 1942 after heading out to investigate a possible oil spill. Not long after the blimp came floating down and finally crashed in Daly City, California, with pilots Ernest Cody and Charles Adams nowhere to be found. The life raft and parachutes were still on board, and while two life vests were missing, the radio was fully functioning yet there had been no radio transmissions indicating anything had gone wrong. So what happened to the pilots? To this day, no one knows, as no sign of either man has ever been found. 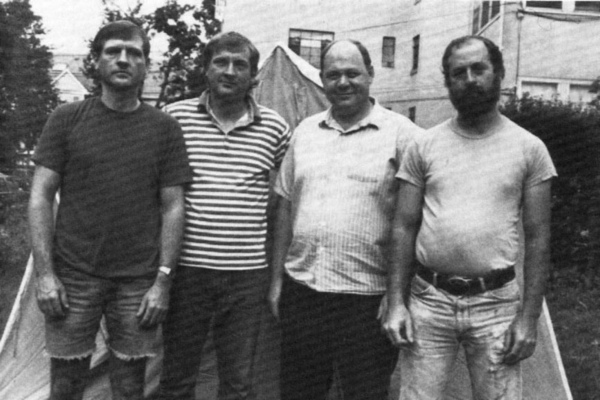 In 1976, four men went on a fishing trip in rural Maine at the Allagash Waterway. While attempting some night fishing, they claimed to see an object float toward them. What followed is one of the most famous alien abduction cases in United States history. They claim to have been missing a huge chunk of time from their memories, specifically noting that, after having lit a fire on the shore, it appeared to have burned out in a matter of moments.

The men—two brothers and their two friends—all recounted stories of abduction which, while incomplete on their own, painted a very vivid picture when pieced together. All four men took lie detector tests and passed easily, which would seem to indicate that they were either very good liars or they firmly believed they had indeed been abducted by aliens. Additionally, all four men claimed to have had dreams in the days and weeks that followed, which were all remarkably similar. Each of their nightmares depicted a rather invasive and humiliating experience.

While the Allagash abduction is a mystery that can never truly be verified or debunked, the mysterious Phoenix UFO Lights have been captured on camera. On more than one occasion over the years, mysterious lights have appeared over the city of Phoenix, Arizona, and to date there has been no explanation for the cause of the phenomenon, leading many to believe it is a true alien visitation.

As recently as 2012, traffic lights caught a strange V-shaped formation of lights on the edge of the city, leaving city officials bewildered. Representatives of both the department of transportation and the National Weather Service stated there was neither utility work taking place, nor any weather activity to explain the strange flashes. Considering the American Southwest’s reputation for UFO activity, it was only natural for alien activity to become the prime explanation for those mysterious lights. 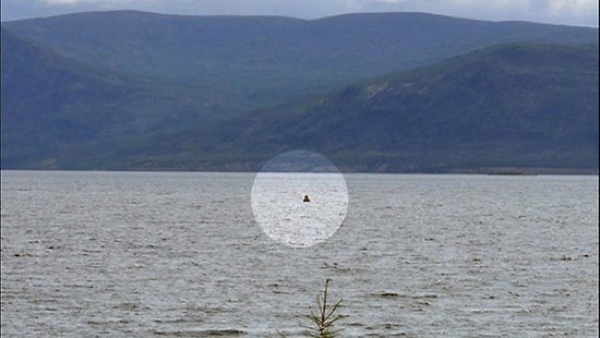 We have already talked about Ogopogo, but apart from some scattered sightings, there is not much to back up that creature’s existence. However, the same cannot be said about the Devil which is believed to reside in a lake in Siberia. However, unlike Ogopogo, this creature no longer poses a threat to the people who visit Lake Labynkyr, because scientists believe they have found the bones of the massive creature.

Members of the Russian Geographical Society recently identified bones in the bottom of the lake which they believe match the description of the so-called Devil while exploring the lake’s floor for completely unrelated reasons. Lake Labynkyr itself has always been a mystery, as despite being located in Siberia, it never freezes. That might make it a pretty enticing home for a sea creature like the Devil, which scientists still cannot identify. Was the Devil a remnant of the dinosaurs? No one is quite sure, but sightings of the Devil have been reported for years as people have claimed to have witnessed seeing an animal the size of the whale in the depths of the lake. 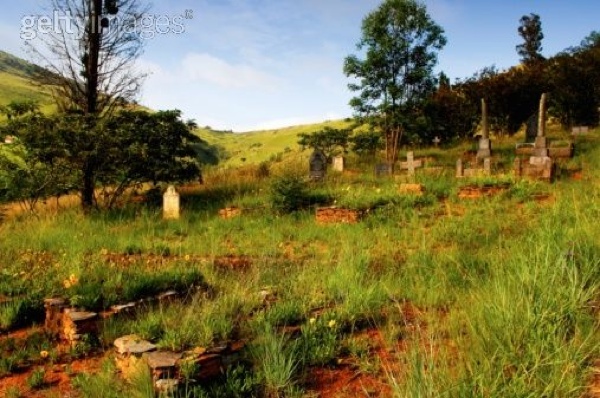 If you have ever seen the movie Poltergeist, you’re aware of the idea that building homes on top of cemeteries is probably a horrendous idea. However, that seemingly natural line of thinking apparently never occurred to the people who built a series of upscale homes in a neighborhood outside of Houston, Texas, and what unfolded sounds extremely similar to the movie, to the point where you would think it’s based entirely on this unsolved mystery.

Two families, including the Haney family, found themselves in the midst of what appeared to be a real live haunting after moving into the neighborhood, particularly when, like in Poltergeist, they began to dig a pool only to discover human corpses under the ground. The corpses belonged to former slaves, and soon enough the Haneys began to notice strange things happening on their property, including strange sounds and items mysteriously moving. Another family, the Williams family, also lived in the area and claimed that whenever they attempted to plant anything in the soil, it would almost immediately die. At one point Jean Williams attempted to dig in an effort to find a body to prove they were living over a gravesite, and after becoming ill her daughter took over. Her daughter promptly suffered a heart attack and within two days, she was dead. 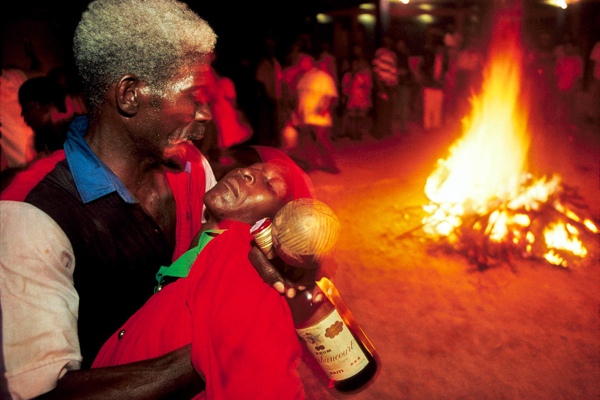 The island of St. Croix is a beautiful island getaway in the Caribbean that most people would view as paradise, but in the 1980s it was home to a sinister series of murders in which five people were killed with cyanide in what authorities believe to have been a voodoo ritual. To date, it is not known whether all five deaths were linked, and who carried out the murders. However, all three cases had similarities, including two sets of victims being married couples who had recently taken out loans to expand their businesses.

Two of those victims were Radha Maharaj and her husband Krishnadath, who were found on the same night, sixteen miles apart. Both had been the victims of cyanide poisoning. According to the family of those victims, they had been receiving mysterious phone calls leading up to their deaths, and police believe those calls were coming from a practice of Obia, which is thought to be a dark form of sorcery revolving around potions and curses.

In all three cases—two sets of couples and one solitary man—thousands of dollars had vanished when they met their deaths. Clearly, theft was the real motivation behind these deaths, but who had killed these people, and were the deaths related? The coincidences are too great for them not to have been, but after more than twenty-five years without tracking down the killer, it looks unlikely the perpetrator will ever be found. 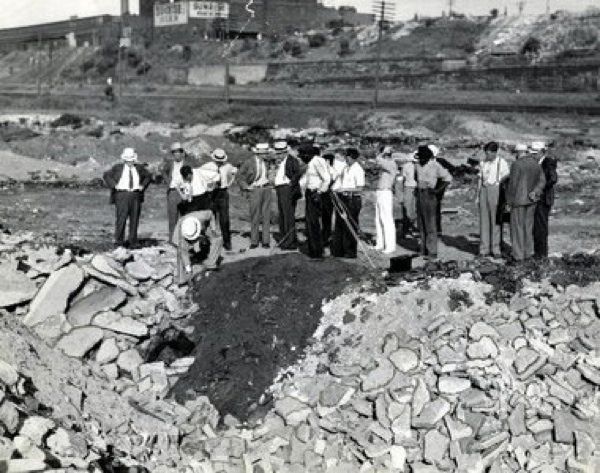 Most people think of Eliot Ness and immediately associate him with Al Capone. However, the famous American lawman was also involved in one of the most infamous and brutal serial murder cases in United States history, only this time Ness would not get his man. In fact, to this day the Cleveland Torso Murders, perpetrated by a man known as the Mad Butcher of Kingsbury Run, remain unsolved. In fact, his inability to find the murderer is said to have been the cause of his descent into alcoholism.

From 1934 to 1938, the Mad Butcher brutally murdered thirteen people, generally leaving only the torsos of the corpses behind. In all, seven men and six women were murdered, with only two victims ever having been identified. Two men were arrested in suspicion of being the Mad Butcher, but they were never convicted. The first suspect, Frank Dolezal, had originally confessed but later recanted, and died in custody. The second suspect, Dr. Francis Sweeney, failed a polygraph test but was released due to a lack of evidence. Ness’s journal hints that he knew who the killer was but could never prove it. And if the untouchable Eliot Ness was unable to prove who the killer was, that’s probably a pretty good indication that these are murders that will go forever unsolved.