When we think of animals that can end our lives in a flash—possibly with the intention of devouring us—we usually imagine lions, sharks, or tigers. But there are are some man-killers that we might never even have considered to be threats. We will now look at the giant man-eating seal, and other bizarre natural threats to human life: 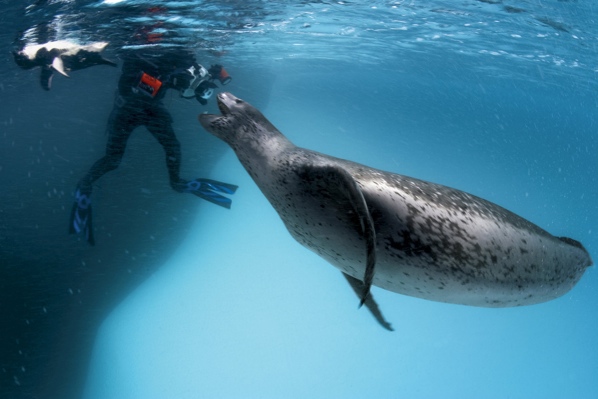 A seal is not the first animal we normally think of when asked to name a man-eater. Antarctica, however, is home to a terrifying marine mammal known as the leopard seal. Growing up to twelve feet (3.7m) in length, and weighing over 1,000 pounds (450 kg), the almost serpent-like leopard seals prowl the waters of the Antarctic ice shelf, and display a ferocious temperament, enormous canine teeth, and the ability to rush towards prey at incredible speeds.

During Ernest Shackleton’s historic expedition to Antarctica, one of the team members was attacked on land by a huge leopard seal, and narrowly escaped after the seal was shot by his companions. In 2003, researcher Kirsty Brown was seized and dragged down more than one hundred feet (30m) to her death—the first known fatality after three recorded predatory attacks. 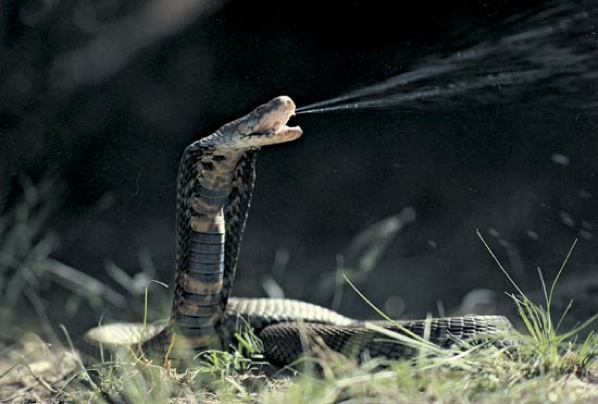 African spitting cobras grow up to nine feet (3m) in length, and possess specially-adapted mouthparts that allow them to spit venom at a distance of more than eight feet (2.5m). The snakes target the eyes of their victims, releasing venom which causes extraordinary amounts of pain and which can effectively dissolve the eyes if medical treatment is not quickly obtained.

Scientists have found that spitters react when shown false faces, and can hit the “eyes” eight out of ten times by blasting a highly accurate stream of venom with the force of a water gun. The venom can be blasted before a real human would have time to react. In spitter habitats, sunglasses are highly recommended. 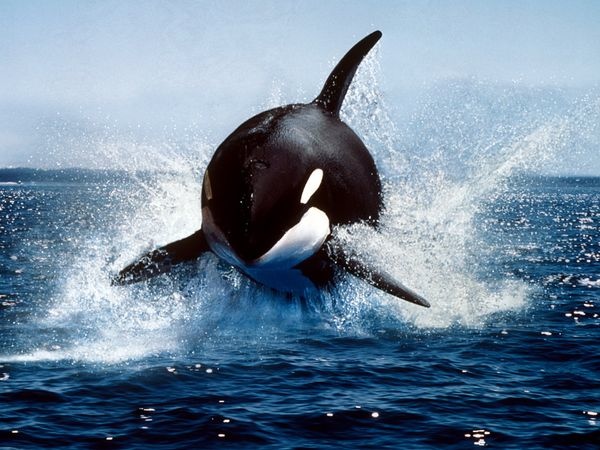 Killer whales (also known as orcas) are the most ferocious of all marine mammals, and have become famous for killing sharks, devouring giant baleen whales, and swimming into tide-pools in order to capture seals. Although scientists and marine aficionados often state that “orcas do not harm humans,” there is a danger in making sweeping assertions about one of Earth’s most potentially lethal carnivores. “Transient” orcas favor animal prey, and have targeted a variety of unlikely substitutes for seals.

In 1972, a surfer in California received one hundred stitches after being seized by an orca. Over thirty years later, an Alaskan boy was charged and rammed by a twenty-five foot transient Orca. Another scary instance involved a pack of orcas attempting to “wave wash” a group of researchers out of their boat; they had learned to capture seals sitting on ice floes in the same manner. Although few attacks have occurred, it is possible that there have simply not been enough opportunities… 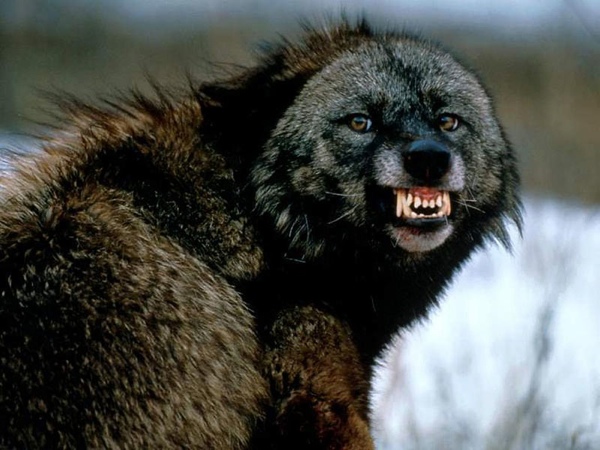 Wolverines are the stuff nightmares are made of, and their ferocity warrants the greatest respect. They weigh only fifteen kilograms, look like a kind of small bear, and they’re not much bigger than the average pet dog—yet this solitary hunter can bring down a moose, an elk—and even a human—all by itself.

The wolverine is actually a member of the weasel family, but it has special adaptations that allow it to rush forward at great speeds and cripple large prey by attaching itself to the jugular vein, hamstrings, or spinal column near the base of the skull. Disproportionately massive and bone-crushing teeth can inflict grievous and usually fatal injuries on its prey. Attacks on humans are uncommon, but this is partially due to the isolation of Northern regions where the wolverines roam. All the same, several deaths have been recorded and injuries are normally severe. 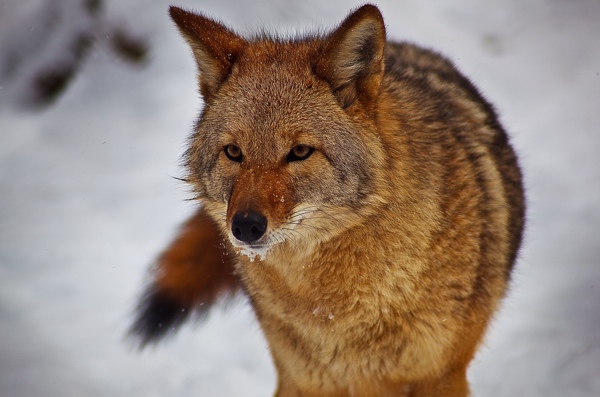 Growing up to five feet in length and weighing up to seventy pounds (30kg), nimble coyotes can run at over forty miles (64km) per hour and can jump thirteen feet (4m) in one bound. Over the past few decades, multiple Coyote attacks have been reported on humans, and especially on children.

In one recent and highly disturbing case, a child was fatally attacked by urban coyotes, and in another, Canadian pop singer Taylor Mitchell was killed and partly eaten by wild coyotes in Nova Scotia. Injuries from the more frequent non-fatal attacks on humans include spinal damage, torn ears, scalp removal, crushed bones and eye injuries. 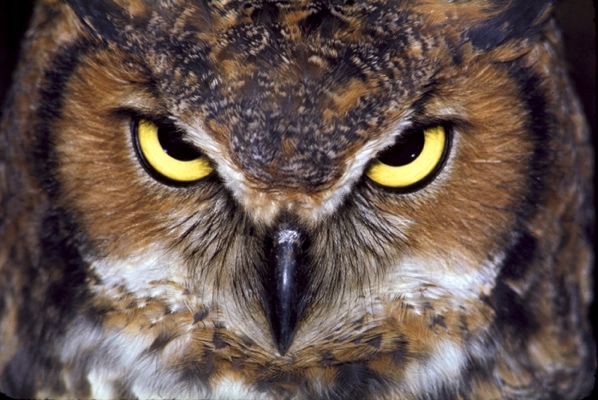 The great horned owl is a magnificent and sometimes ferocious bird of prey, native to the Americas. Weighing over four pounds (1.8kg), with a wingspan of five feet (1.5m), the Great Horned Owl is also known as the “Flying Tiger”, preying on animals up to three times its own size.

The huge talons are used to kill skunks and cats, but also helped to give this two-foot-tall raptor the distinction of being the only bird of prey known to have fatally attacked a human. The attack occurred when a researcher removed some eggs from a nest for research, prompting the outraged predator to inflict skull-crushing talon injuries. Great horned owls range from Alaska to Brazil, and often take over crow nests. Tampering with any unknown bird nest could thus have fatal consequences… 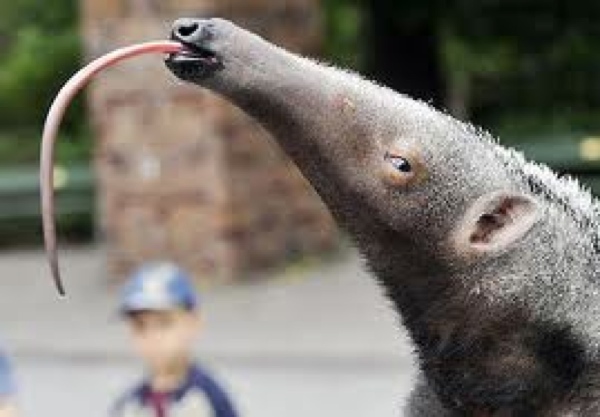 The giant anteater is a bizarre mammal native to South America’s grassland regions. It can grow to more than six feet (1.8m) in length, and weighs around one hundred and fifty pounds (70kg). Although anteaters look absolutely ridiculous, or even cute, hugging or otherwise approaching one would not be a wise move.

Anteaters are physically adapted to rip ant hills into shreds, allowing their pachyderm-like trunk to extricate hundreds of ants. When threatened by a human or another animal, the anteater is capable of quickly destroying the intruder with its powerful arms and knife-like claws. In one tragic case, a conservationist working to help these endangered animals was attacked, and later died of her injuries. 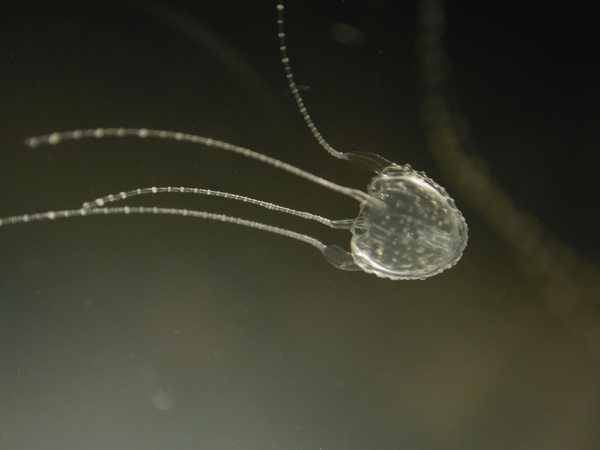 Sometimes it is not size, strength, or ferocity that makes an animal dangerous, but its obscurity—allowing it to sneak past our senses until it is too late. While well-publicized warnings have long focused on deadly box jellyfish, another grave danger is presented to swimmers by the Irukandji—the “tiny killer.” Measuring only one cubic centimeter, this clear and nearly invisible creature floats aimlessly through the waves, trailing filaments up to two feet in length which carry venom one hundred times more potent than that of a cobra.

Swimmers who brush into the invisible creatures usually require hospitalization, and two deaths were recorded in Australia in 2002. The Irukandji has been found as far north as the UK—meaning that the invisible danger may be present almost everywhere… 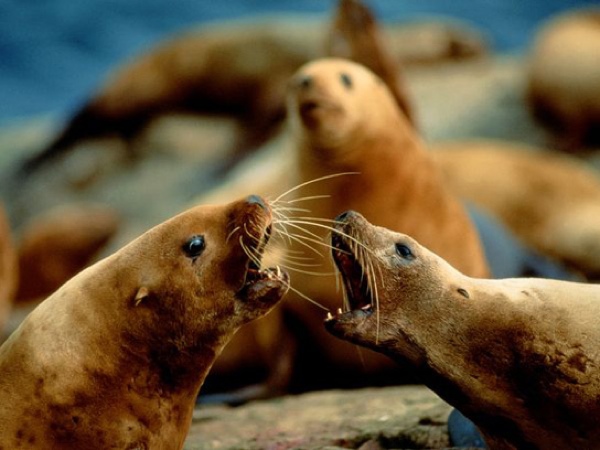 The “trained seal” seen so called “seal” circuses is actually a California sea lion, a large marine mammal which lives off the western coast of North America. The intelligent pinniped may have some amusing tricks to perform, but in the wild, the antics of this seven hundred pound (320kg), six-foot-long sea monster have nearly been deadly. Male sea lions are extremely aggressive and territorial, and have been known to randomly attack swimmers off the Pacific Coast. Attacks by sea lions are in fact more prevalent than shark attacks in this region. In 2004, an Alaskan fisherman was pulled overboard and dragged down underwater by a sea lion that leaped on deck—narrowly escaping with his life. The name “sea lion” was clearly not given for nothing… 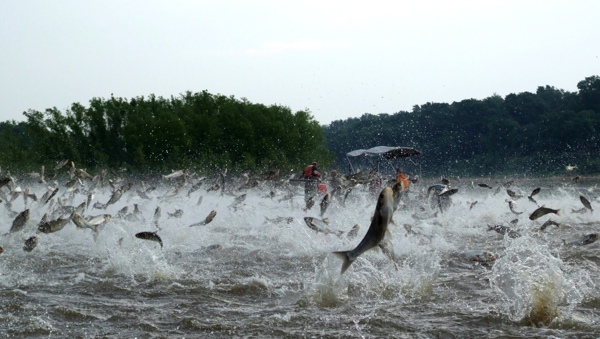 Asian carp are wild—and comparatively enormous—relatives of pet goldfish, weighing up to one hundred pounds (45kg) and reaching lengths of more than four feet (1.2m).  Native to rivers throughout Asia, their introduction to North America has proved disastrous: they have invaded waterways and lakes in massive numbers.

As the areas the fish invade are often zones for water recreation, a deadly hazard has been created by the fish’s habit of jumping clear out of the water. A number of serious injuries have been caused in this way, by the huge carp smashing into the faces or bodies of boat operators. Broken bones, back injuries, and black eyes have been reported. US and Canadian government departments have urged that these killer carp be controlled before a death occurs…

Mike Williams is a writer and world researcher with a slightly life-disrupting passion for bizarre dangers and mysteries of the unexplained.