Garden gnomes are a suburban staple, decorating kitschy neighborhoods all around the world. But sometimes a garden gnome village will appear in the most unexpected of places—popular city locations, railways, roundabouts and so on. This is a list of 10 of the (surprisingly) many garden gnome colonies that have broken through the confines of their lawns and appeared in curious, little-known places of the world.

Tucked away between Lake Hiawatha and Lake Apache in Red Feather Lakes, Colorado, there’s a hidden, enchanted trail. The only marker for it is off-road, inside dense clusters of aspen trees. There you can find a rock with the name “Gnome Road” and an arrow painted on it, directing you deeper into the woods. Its elusive fae creatures can be hard to find, but if you’re up for a treasure hunt, you can find figurines of garden gnomes, fairies, elves, pink flamingos and more lounging across boulders, peeking shyly through the eves, and perched on tree branches.[1] The origins of this gnome community are a mystery, but the quarter-mile mountain hike is a little-known thing of wonder. Adding to its serene quality, there is the Great Stupa of Dharmakaya residing further into the wilderness—a peaceful tower guarded by its hidden ceramic spirits. 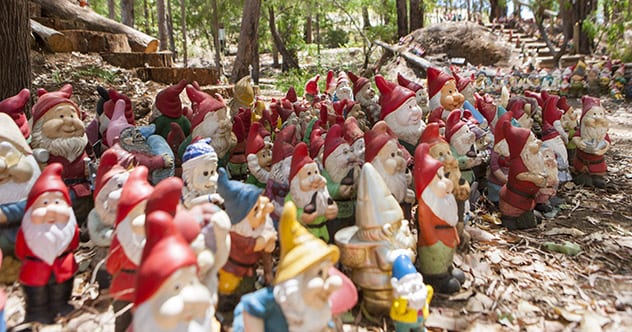 How or why little garden gnomes began sprouting up from a Western Australian roundabout remains a mystery, but nothing has been able to stop their population boom. A cap-count has found that there are at least 7,000 residents of Gnomeville, and not all of them are from Aussie locals! Visitors from all across the world have come to drop off a gnome or two, with messages and locations attached to them, making Gnomesville a real melting pot in Ferguson Valley. Some of them come with punny words of wisdom stuck to them, such as “Gnome Wasn’t Built in a Day,” or “Charity Begins at Gnome”.[2] They have built a fully fledged society over the years, separating into suburbs, seasonal “football teams,” and even constructing a fenced-in detention center for naughty gnomes. The first resident was thought to have been planted to protest the roundabout being built, but the official Gnomesville website makes no mention of this. 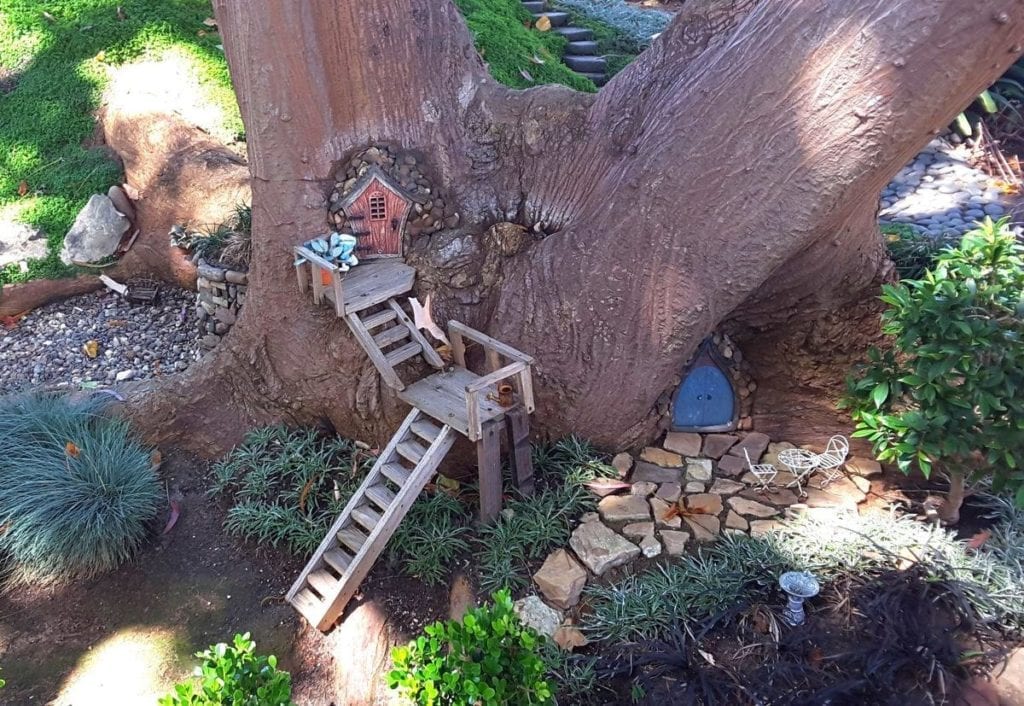 There is more to the gnome village on the California State University campus than meets the eye. The groundsman who came up with the idea, Peter Chance, was inspired by the movie Fern Gully to create an environmentally friendly gnome garden for the campus’ erosion issues.[3] Runoff from the university’s health center was clogging their drainage pipes with silt, so they made a miniature village blueprint to anchor the soil in place. Everything in the garden is handcrafted—the roads were molded from infield clay, reclaimed redwood chips became stairs to treehouses, and a concrete electrical box was transformed into a centerpiece gnome home. Moss speckled with vibrant flowers retains water between the little houses. But plans are underway for further exciting developments as Chance intends to expand the garden upwards, stringing bridges between treehouse homes. 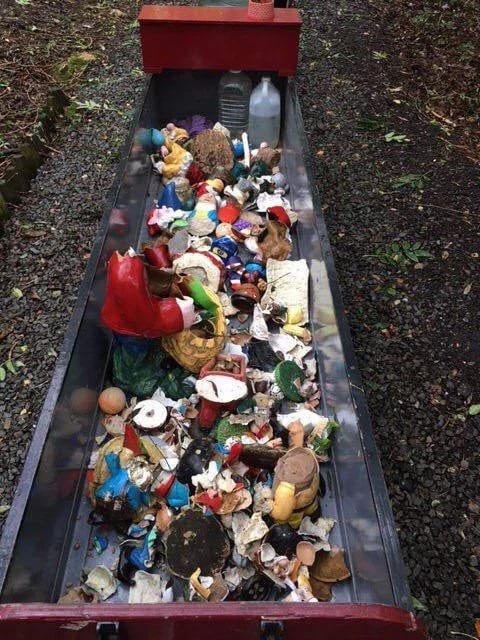 In 2016, a peaceful railroad colony of gnomes in Kingsbury Water Park, England, was massacred in the middle of the night. The internet was in a brief uproar over the pictures of 40 poor, ceramic gnome carcasses, which gave the location some notoriety before it was repopulated.[4] Still, the track at Echills Wood Railway remains a rare, unknown attraction. The details of how the gnomes arrived in Kingsbury Water Park are unknown, but they began springing up beside the tracks of a miniature steam train that runs for 2km (1.24 miles) through the park. If you keep your eyes peeled, you can catch a variety of these figurines smiling or waving at you from the brush. 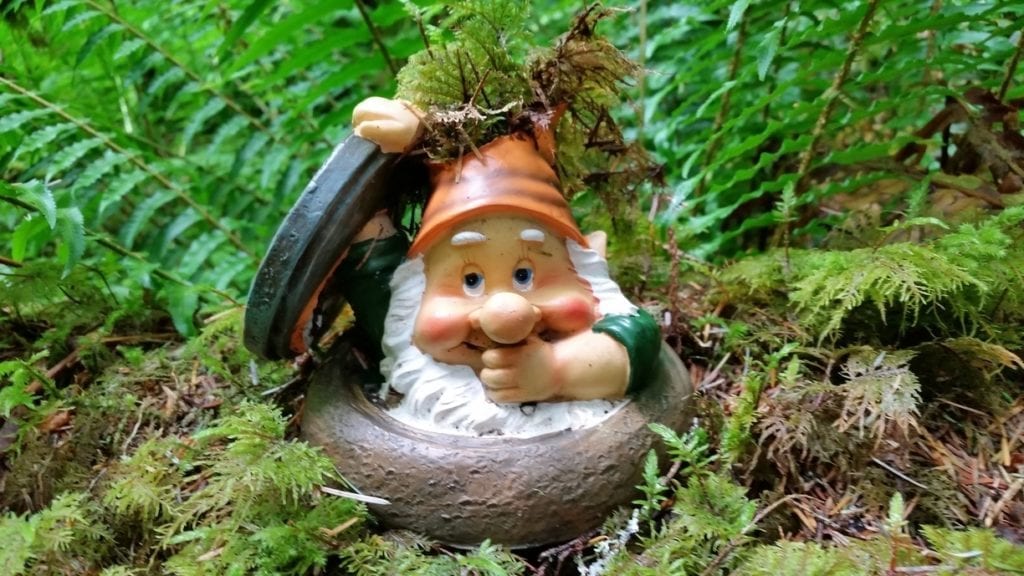 Deep into Federation Forest State Park, Washington, dedicated hikers can picnic with fairytale creatures. Whimsical faces in the evergreen trees, tiny doorways in their roots, miniature outhouses, gardens, and gnomes peeking out from secret nooks, the area is teeming with magic. Lovingly referred to as Gnome Village or “Hobbit Village,” this location is maintained by a mysterious group of hikers. The trek to visit the gnomes is approximately 3.6km (2.25 miles) of easy trails winding into one another, and the village is equipped with restrooms and picnic tables for visitors.[5]

The gnome homes around Bonney Lake, Washington, are scattered amongst several parks and trailheads, perfect for people who enjoy a treasure hunt. It began when council member Laurie Carter caught wind of a gnome door stuck to a tree in Golden Gate Park (LINK 10). Hoping to inspire the same awe and encourage kids to get outside, she emailed a fellow councilman—Tom Watson, a hobbyist wood carver—and asked if he could create a gnome door. He made 10 total, all of which are GPS-marked, and you can receive a special pin from Bonney Lake City Hall for finding them all. However, some of the doors are more challenging to spot than others, hidden inside twisty forest paths and overgrown trails.[6] 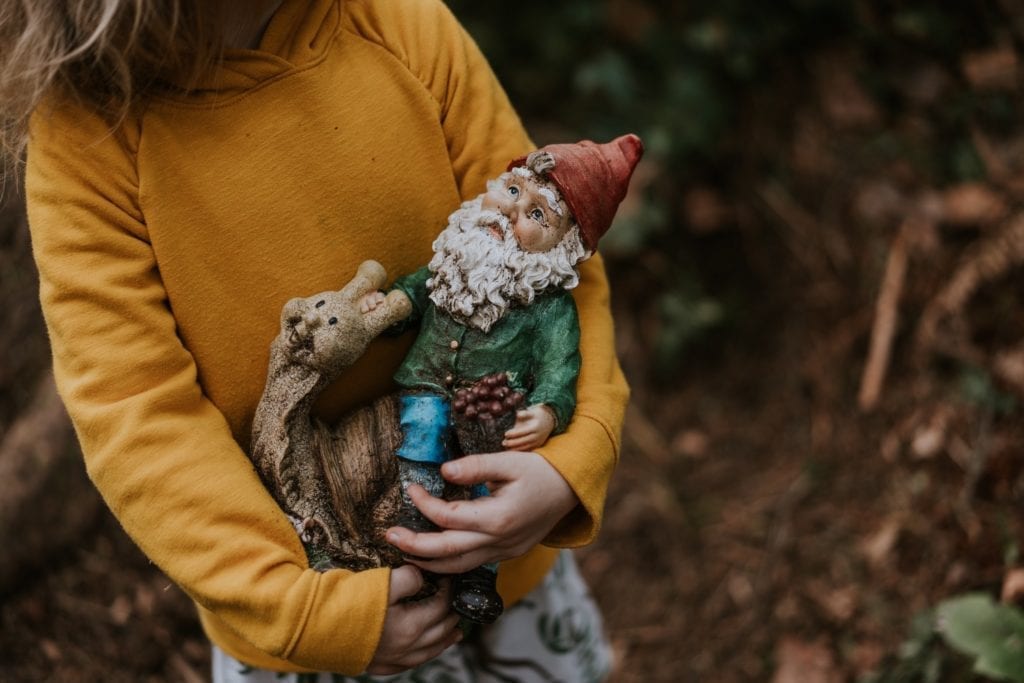 Henry Ridge trailhead in Maple Valley is dripping with willow trees, everything furred with vibrant green moss, and the pathway is shrouded with ferns. It looks so similar to a fairytale landscape, you expect a unicorn to come prancing out. Even the names of the trails are enchanting: Once Upon A Time, Lil’ Red, and The Lorax.[7] It can be a steep hike with crumbling rocks in some areas, but it’s well worth the effort to come across the trailhead’s residents. All throughout the 4.83km (3 mile) round trip, you can find gnomes hidden under logs, inside tree hollows, or resting in the ferns. How they arrived in Maple Valley is a mystery. 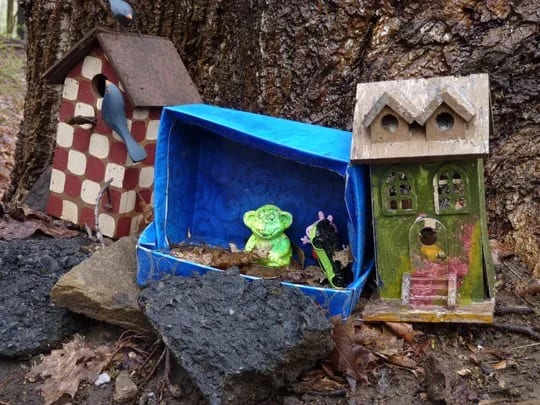 A spiritual healer attends the gnomes of Columbia Trail in Hunterdon County, New Jersey. Christina Lynn Whited is a business owner of Inside/Out who moonlights as something of a psychic, claiming to have seen the ghosts of people such as John Lennon and Florence Nightingale. In order to help children understand the “connectedness of all things” and get them outside and off their video games, she installed small gnome homes around the Columbia Trail.[8] The scavenger hunt for each hidden creature thrived far beyond Whited’s expectations. Over the years, more than 100 gnome homes have spread across townships, and most of them are handcrafted by random visitors. It has gained such a cult following that there are now official building regulations for the houses, and the first two weeks of May are always set aside for the creators to come and repair their homes or for volunteers to “adopt” and renovate. 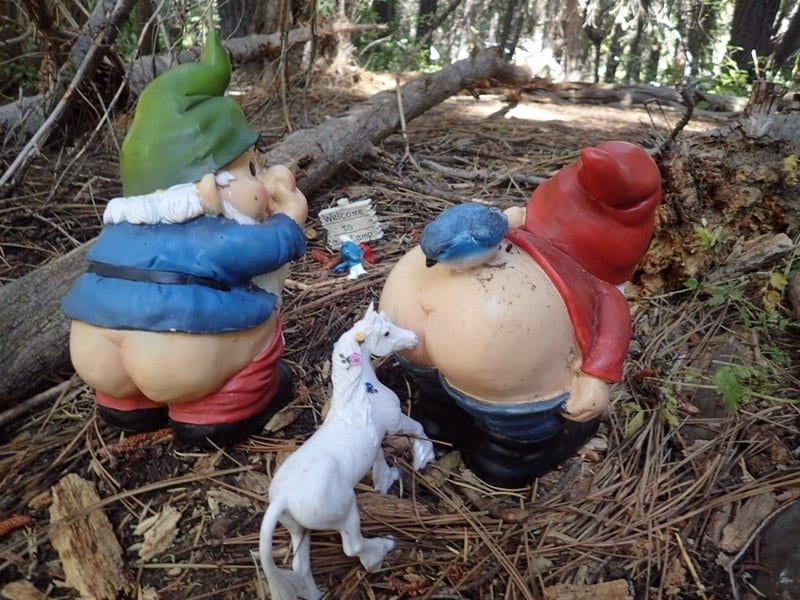 In its past life, the Grand Avenue/Barker Pass connector was a fire trail by Lake Tahoe, but in more recent times it has become a gorgeous footpath with some mystical inhabitants). The trail winds narrowly between aspen trees and spring wildflowers, relatively hidden and unknown by most. The local who tends to the gnome population there has also remained nameless, although there is clearly someone watching over the figurines; they are removed from the trail every winter and returned in the spring.[9] The gnomes can be found upstream of a creek crossing, meditating on the banks, leaning on their shovels, and mooning innocent passersby.

France has its own special rebel group known as The Liberation Front for Garden Gnomes, and they act as the voice for voiceless lawn figurines all across the country by stealing them. It might sound like a joke, but homeowners who were attached to their ornaments have been calling the police in an outrage. In 2001, a cathedral in Saint-Die was bombarded with 74 swindled garden gnomes, all standing outside the door. The next day, a gathering of 100 garden gnomes was discovered in the woods of the Vosges region. What is the Liberation Front’s goal? They want the gnomes to be free in their natural environment. One pamphlet generated by this alliance also states matter-of-factly that gnomes cannot breed in captivity, and therefore their owners are “conspiring in an act of genocide”.[10] Who knows where the next gnome rally will appear?

Read about the crazy 10 Australian Tourist Attractions that started out as a joke, and the creepy gnome, Barbegazi, on 10 Lesser-Known Versions Of Famous Mythological Beings.