Scientific research is spotting a surprising range of animals that engage in same-sex relationships. In this mind-expanding list, we will look at the “Lesbian Albatrosses” of Hawaii; male dolphins who keep boyfriends; and sam-sex seagull couples who adopt young to raise together. In the animal world, big surprises always await us: 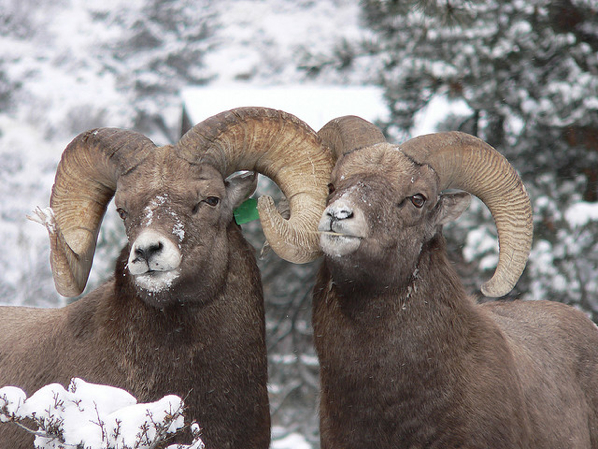 We are often told to count sheep when we want to fall asleep, but the natural tendencies of rams actually might keep scientists up at night. Domestic rams are statistically among the most extensively gay mammals in existence. Scientific studies have shown that up to an incredible eight percent of male sheep may form exclusively male-to-male pair bonds, forsaking all contact with the female ewes.

These same sex couples do not mate, but they act as a couple in every other way throughout their lives. The homosexual herds stand out as an example of diverse relationship status among animals—but of course, they’re less than popular among farmers, who seek to breed as many sheep as possible.

In 2007, scientists studying the laysan albatrosses of Oahu noticed that sixty percent of birds present were female, and that thirty-one percent of all the albatross pairs were lesbian. These pairs of female birds exhibit all the behaviors of close pair bonding, and engage in nesting, bill kissing, and a variety of other albatross breeding behaviors.

Laysan albatrosses are normally highly defensive when they sense intruders— indicating that the acceptance of another female is true pair bonding. The same-sex partnerships may last as long as traditional pairs—in one case, a whopping nineteen years. In New Zealand, a same-sex pair of even larger royal albatrosses were recently found tending a nest together, suggesting that the phenomenon may be widespread. 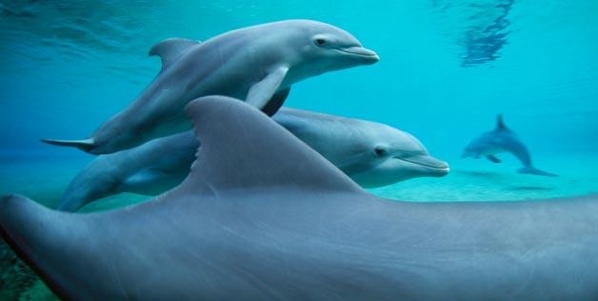 Dolphins have a position on the top tier of animal intelligence, and are comparable to both chimpanzees and humans in cognitive and social abilities. Great diversity exists in dolphin societies as well, and numerous same-sex liaisons have been identified.

In one incredible case, a pair of gay dolphins enjoyed a seventeen year relationship, while researchers identified a whole pod of dolphins—composed entirely of males—whose members were certainly not lacking in romantic experiences. It has become clear that dolphin relationships are extremely strong, regardless of the specific orientation of the marine mammals involved.  Many other dolphins have been found to be bisexual, enjoying passionate contact among their own sex as well as the opposite. 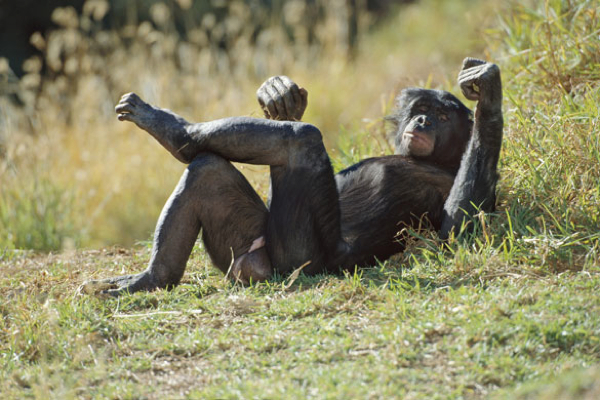 Bonobos, which resemble miniature chimpanzees, are not only among the world’s most intelligent animals but are in fact humanity’s closest relative. Living in highly social colonies, bonobos are more good-natured compared to their frequently violent chimpanzee relatives. They’re famous for using a language of love, rather than a language of aggression, to resolve problems and communicate with each other.

Since many of the conflicts occur between two males or between two females, homosexual bonding is a frequent occurrence among these amorous apes. Sexual encounters may serve to increase social standing among females—but it also occurs among males, who may take a more “play fight”-based approach.  Bonobos are critically endangered, and they require the utmost effort from conservationists to keep them in the wild.

6
Cock of the Rock 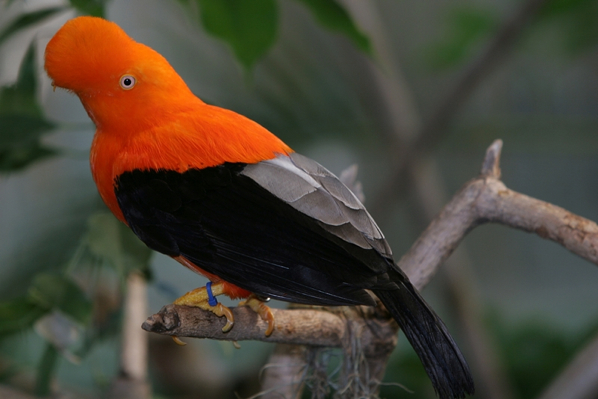 Andean “cock of the rock” are spectacular forest songbirds with an extremely dramatic appearance, combining brilliant orange with a huge crest. Natural selection has led to some rather outlandish feather adornments. Remarkably, up to forty percent of males engage in same sex activity.

Unlike the seabirds previously discussed, only the male birds of this species seek homosexual encounters. It is possible that the gay behavior stems from high population densities, and extensive competition for females. Same sex encounters also satisfy the bird’s desire for opportunities to express their promiscuous and highly developed mating drive, thereby increasing social stability among the normally edgy birds. 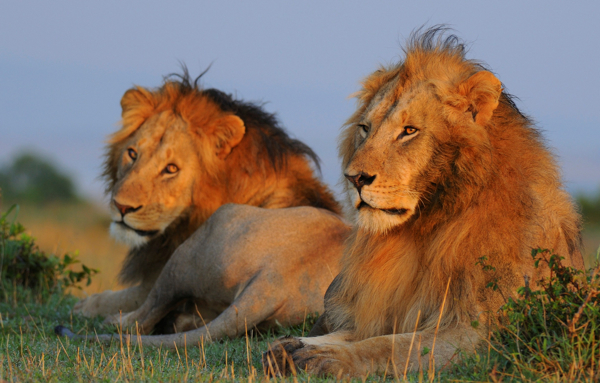 African lions are frequently invoked as symbols of traditional rulership, especially in patriarchal societies which involve female harems. A certain percentage of male African lions, however, forsake the available females in order to form their own same-sex group gatherings.

Male lions have been documented mounting other males, and engaging in a variety of behaviors normally reserved for single pairs of opposite-sex couples. Though many other animal societies are structured in a way that might occasionally favor same-gender pairing, the reason for male lion associations is unknown. Lions have some of the strongest sex drives of any cat species, meaning that the encounters are probably more . . . purposeful than same sex interactions among birds or rams. 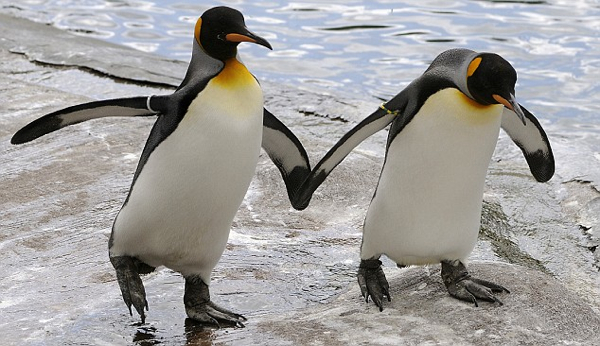 Homosexual behavior has been documented in wild Australian black swans, which sometimes form threesomes involving two males as they establish a nest site. Incredibly, such arrangements involving two males actually led to higher breeding success, due to the effectiveness of the males in defending the nest site from predators.

Additionally, two male penguins made headlines after they paired up in a zoo, and were given an egg which they successfully raised.  Prior to being given an egg of their own, the gay penguins attempted to steal eggs from straight penguin couples.

Ornithologists exploring the phenomenon have observed that, generally speaking, male bird pairs form among the more promiscuous songbird species, while female pairs form among monogamous species. While such behavior was naturally established in some bird species, scientific research has indicated that increased rates of same sex pairing among the South American ibis may be the result of mercury pollution from mining operations, which changes sex hormones. 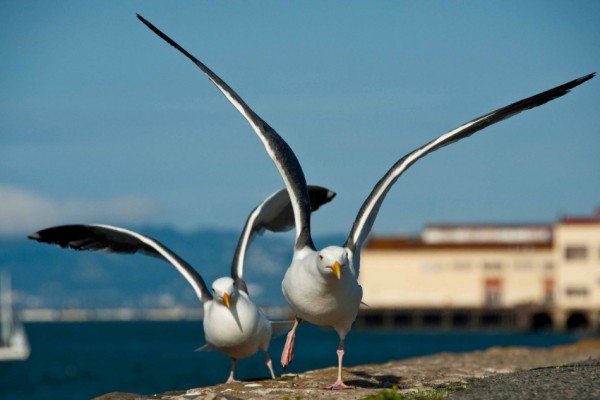 Western gulls resemble the laysan albatross, but they’re actually more closely related to puffins. Convergent evolution has given them a resemblance to the huge albatrosses, along with a similar mating system—again sometimes involving two females. The more expressive gull pairs may even engage in mounting behaviors.

Scientific expeditions to California’s Channel Islands revealed that no less than fourteen percent of gull pairs were partners in female-female couples. This diversity in the colonies was first noticed when some nests were found to contain surprisingly large numbers of eggs. Some of these eggs were even fertilized, due to “on the side” encounters with male gulls. 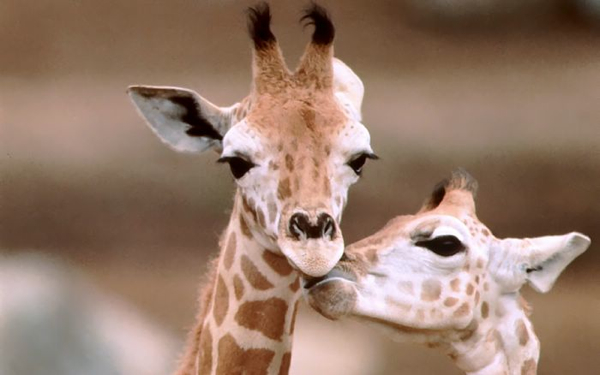 Young male giraffes, prior to mating with a female, sometimes engage in same-sex encounters and short term alliances. Activities may include tongue kissing, neck massaging and “hugs,” as well as full-body contact and nuzzling. Scientists theorize that the purpose of the same-gender interactions is to develop a familiarity with the mating techniques before using them to court the appropriate female giraffe. In the small-town community which is the giraffe herd, it seems that the idea is to get it right with the girls from the word go—by checking out some of the guys, first. 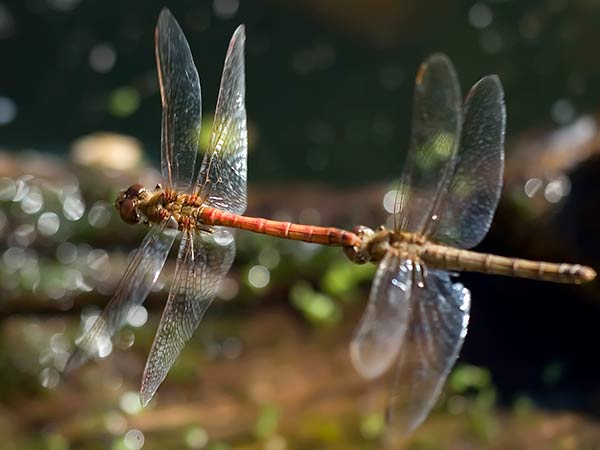 It’s a fact: bugs can be gay. Dragonflies are among the most highly evolved predators in the insect world, and they’re also among the most demonstrative—engaging in spectacular in-flight ballets as well as serious sensual encounters with other dragonflies.

But the presence of the opposite sex is not always a prerequisite to dragonfly dating; investigations have revealed a surprisingly high frequency of matings between same-sex dragonflies. Understanding the reasons for same gender pairings among such small invertebrates is challenging, and the interactions are poorly understood even today. Environmental chemistry and the unavailability of partners may be one factor influencing dragonfly mating behavior.

Andrew Blackstone is a radical researcher with a passion for the unexpected or mysterious elements of the universe. He is based in Canada’s incredible coast mountains region.