Bioluminescence (light produced by biological organisms) can be entrancing. The soft glow of fireflies at night is a common sight in places around the world, but not all cases of bioluminescence are so peaceful.

Although the firefly uses its glow for communication and finding sexual partners, bioluminescence isn’t always an invitation. Sometimes, it is used as a diversion or as camouflage.

The natural world is a fierce place, and any advantage can mean the difference between life and death. These 10 examples of biological light are used by animals as a way to defend and deceive.

10 The Glowing Squirts Of The Pocket Shark 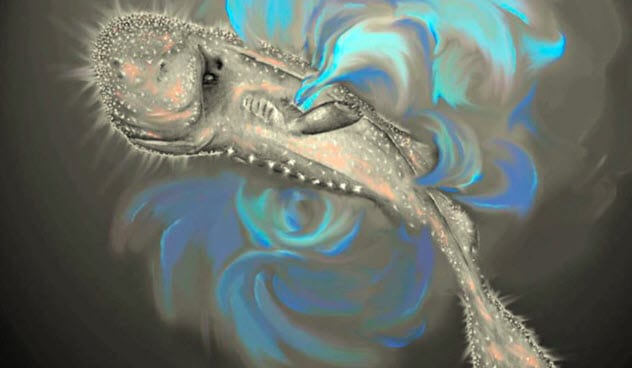 In a happy accident in 2010, researchers in the Gulf of Mexico were collecting samples for a study of sperm whale feeding and happened to capture a specimen of an entirely new species of pocket shark. These sharks are only 14 centimeters (5.5 in) long.

This one wasn’t recognized as a pocket shark until 2013 when the specimens collected were further examined. It’s an understandable mistake as the only other known type of pocket shark makes its home in the Pacific Ocean and not the Gulf of Mexico.

Out of the 500 or so species of sharks in the world, this newly discovered one has an unusual talent. Tucked next to each of its two front fins is a pouch filled with bioluminescent liquid. This glowing concoction can be released at will, creating small clouds of glowing . . . squirt.[1]

The pocket shark uses these glow-in-the-dark clouds as bait for prey attracted to the light—like moths to a flame. Easily gathered prey ripe for the picking.

The anglerfish (of which there are some 200 species) lives deep in the inhospitable oceans—so deep that sunlight cannot filter through the murk. But that’s all right because the anglerfish brings its own light.

Female anglerfish have a section of dorsal spine that sticks out from their foreheads like a fishing pole. On its tip is a glowing orb. As with other fishers, this pole has bait. The light attracts prey, and when they get in range, the anglerfish attacks with its massive crescent-shaped mouth filled with skinny, translucent teeth.

The anglerfish’s body is so pliable that it can consume prey up to twice as large as its own body. This is a feat because the largest anglerfish can grow more than 1 meter (3 ft) long.[2] 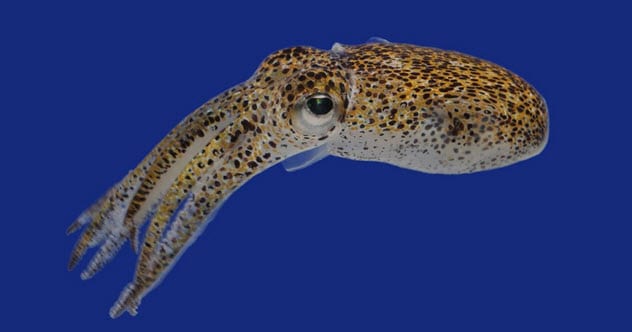 During the day, this bobtail squid hides in the sands off the coast of Hawaii. But at night, it must leave this safety to hunt while avoiding being eaten itself. It does this by means of some enlisted help.

The bacteria produce just enough light to perfectly match the illumination of the Moon in the ocean waters. This allows the Hawaiian bobtail squid to blend seamlessly into its surroundings and remain safely hidden from predators while on the hunt itself. All because of millions of small guests. Meanwhile, the bacteria benefit from the sugars and amino acids provided by the squid.[3]

7 The Red Searchlight Of The Black Dragonfish 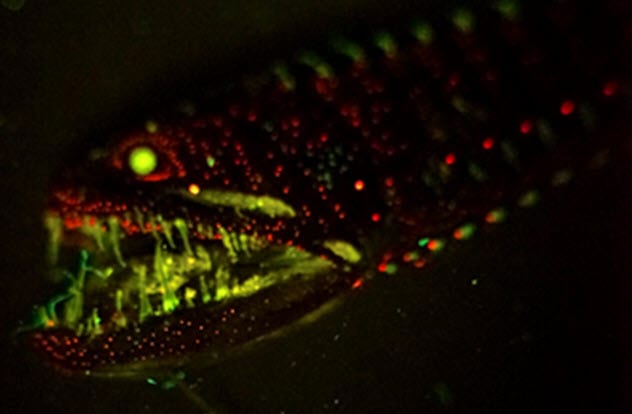 Most bioluminescence in the ocean is a blue color. Perhaps it’s no coincidence because those colors are easily visible to most ocean-dwelling creatures and shine far through the water. In contrast, red light is quickly absorbed by the ocean. Also, most animals are not equipped to perceive colors like red or yellow.

One notable exception is the black dragonfish. It produces a short wavelength color, like blue, and then filters it through a fluorescent pigment while still inside its body. This lengthens the light and turns it red before it is emitted into the ocean. But why bother when red light doesn’t travel far?[4]

This dragonfish is special because it can produce red light as well as see it. Very few marine creatures can. This gives it a huge advantage when hunting for food. Its red spotlight allows it to see prey while the prey remains blissfully blind and ignorant. The black dragonfish produces light that only it can see, giving it a huge strategic advantage in ocean combat.


6 The Deadly Shine Of The Bioluminescent Octopus 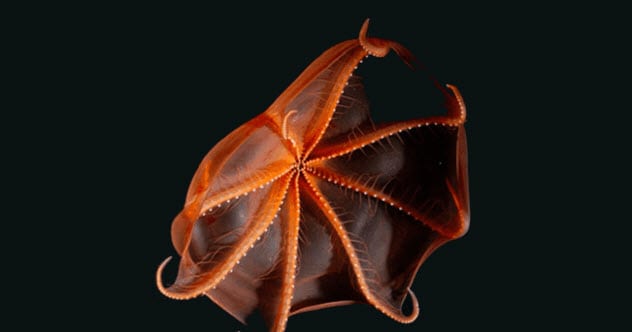 With tentacles reaching 36 centimeters (14 in) from its body, the Stauroteuthis syrtensis, or bioluminescent octopus, is a beautiful sight for two immediately apparent reasons. The first is a webbing that connects its tentacles, giving it an imposing umbrellalike shape. The second noteworthy feature is that its suction cups are modified to emit a powerful twinkling blue-green light.

The purpose of this light is hard to determine because this octopus lives at depths up to 4,000 meters (13,100 ft) below the ocean’s surface. However, its diet primary consists of small planktonic crustaceans which have well-developed and sensitive eyes that are attracted to light sources.[5]

This bioluminescent octopus likely dazzles the crustaceans with both sustained and pulsing lights. Once they’re close enough, it uses a mucous web to entrap the crustaceans and usher them to their fate.

The photophores mask the cookiecutter’s entire body—with one notable exception. Around its neck is a “collar” that has no photophores, creating a gap of counterillumination. Most of its body is concealed, except for this small portion of neck which is clearly visible.

This may seem like a design flaw because surely the most effective camouflage would be complete. But that gap in the shark’s camouflage turns its defensive ability into an offensive one.

As only a small section is left visible, it acts as a lure for would-be predators that believe they’re attacking a much smaller fish. However, these opportunists are not equipped to deal with the much larger reality.

When they attempt to eat the exposed neck, they are faced with the cookiecutter’s powerful suction and razor teeth. After the shark latches onto the would-be attacker, the cookiecutter spins its body wildly, scooping a section of flesh from its unsuspecting victim.[6]


4 The Green Bombs Of The Swima Worms 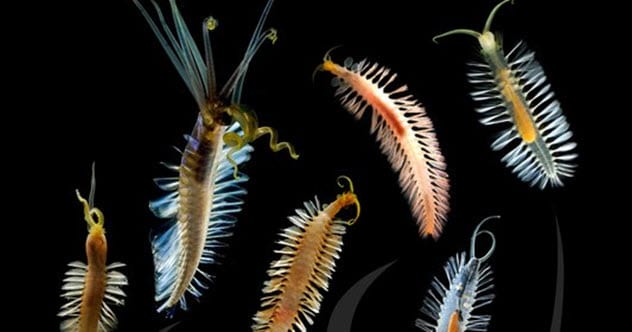 On the seabed off the West Coast of the United States lives a genus of sea worms named Swima that are designed like a long rowboat. They have rows of fan-shaped bristles that they use as paddles to maneuver in the ocean depths.

These bristles give them their distinctive design, but their truly outstanding feature is found in a small cluster near their heads. Small green-colored gills give the Swima their nickname: “The Green Bombers.”

When the worm is attacked or disturbed, it detaches one of these green “bombs” and deploys it as a distraction. Once detached, the gill begins glowing an intense green to divert attention from the worm itself. Meanwhile, the Swima uses the opportunity to swim away from danger. All told, each worm comes equipped with about eight of these bombs at any given time.[7]

3 The Squid Willing To Make Sacrifices

The Octopoteuthis deletron is a squid in the cold Pacific depths that takes the tactic favored by the green bomber to the extreme. To ward off its many predators, this squid is willing to make grave sacrifices for survival.

If put in a life-threatening situation, it latches onto its attacker with its limbs and then severs those limbs. While the squid attempts to flee, its sacrificed tentacles flail about and emit light, all in an attempt to distract the attacker long enough for the squid to get away.[8]

It’s a dangerous gamble because regrowing limbs costs energy, which will be harder to come by when swimming and feeding with missing appendages. But as cephalopod researcher Stephanie Bush said, “The cost is less than being dead.”


2 The Milky Glow Of The Hitchhiker Bacteria 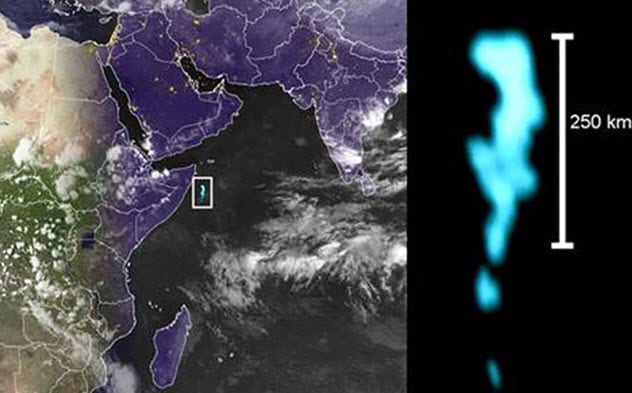 In 1995, the SS Lima, a British merchant vessel, encountered an expanse of the ocean that glowed a milky white color. For six hours, the vessel sailed through what the captain described as an expanse much like snow or clouds.

This stretch of glowing ocean may have felt like something out of a fairy tale, but it was actually the result of an enormous colony of bioluminescent bacteria. These glowing bacteria float freely in the ocean, though not usually in such large groups as the Lima encountered.

But glowing takes energy, and no life-form wants to waste its strength needlessly. As it turns out, the emission of light is an invitation. Most creatures on this list use their bioluminescence to avoid being eaten, but these ocean bacteria use it for the opposite.

The glow is an invitation to fish and squid to chow down on the bacteria. After all, a fish’s stomach is full of nutrients and the fish can carry the bacteria much farther than they could float alone.[9]

NOVA: Blinded by the Light

Acanthephyra purpurea is a species of shrimp that is not bioluminescent at all. In fact, it appears to be like an average shrimp. If you caught it on a calm day, it would have nothing to attract your attention. It has no photophores and no illumination from its body at all.

What it does have is a biological way to produce and store a chemical compound called luciferin. In the event of an attack, this shrimp spews out the luciferin in what would appear to be vomit to the layman.[10]

When the chemical compound comes into contact with the ocean water’s oxygen, it creates a chemical reaction that glows. This luminous display looks almost like a blue fire. It should give the shrimp the distraction it needs to make a hasty retreat and live to spit fire another day.