Being an astronaut may not sound like such a dream job nowadays as it has done in the past—but there was once a time when almost every child dreamed of shuttling into space.

The space race between the USSR and the USA—not to mention countless blockbuster space films—created a popular conception of astronauts as some of the most heroic, intrepid, and glamorous people in the world. This list will attempt to rank the ten most famous, inspirational, and influential astronauts of all time, who each changed the course of history by breaking down one or another of humankind’s barriers. 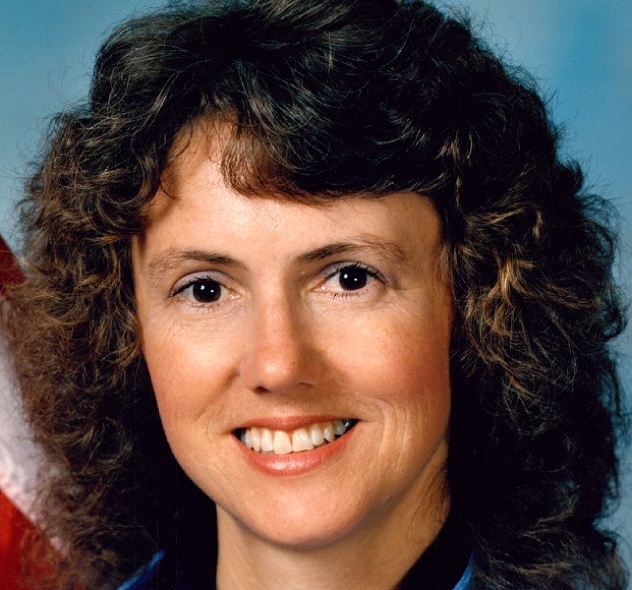 Christa is probably the most tragic figure on this list, and one who will always be in many of our older readers’ hearts.

When she was still a child she had been fascinated by the space program, but when she grew older she instead opted to become a teacher. In 1984, however, NASA announced that it was seeking a teacher to fly on the Space Shuttle Challenger. Christa applied, got the job, and took a leave of absence from teaching to train for the fulfillment of her childhood dream.

She and seven other astronauts on board were killed when the Challenger exploded only seventy-eight seconds after taking off from Cape Canaveral, in what remains to this day one of the most tragic accidents in NASA’s history. 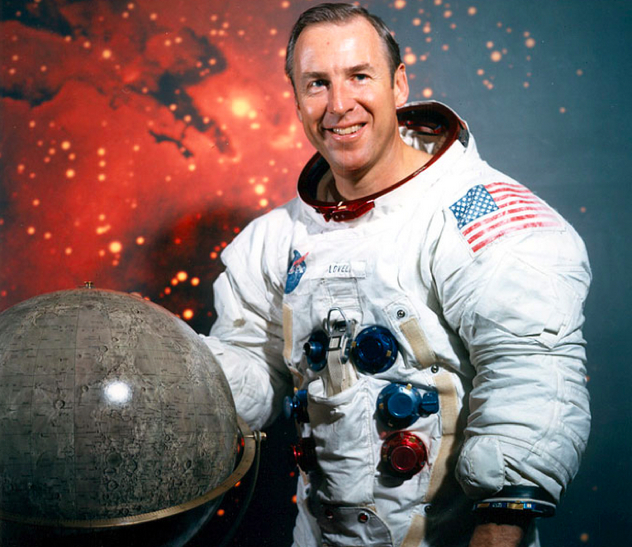 “Houston, we’ve had a problem here”

It’s very possible that most people who hear this name (and know it) probably think of Tom Hanks, and not the real Jim Lovell. It’s also quite possible that if Lovell were a sportsman, he would be considered to be an extremely unlucky player—the one who never quite made the cut for the big game. He was the commander of the Apollo 13 mission, which suffered from a crippling system failure en route to the moon but was brought back safely. The mission was left unaccomplished, however, and once again Lovell had failed to make his dream come true.

Lovell was the first of only three people to fly to the moon twice—and the only one to have flown there twice without making a landing. He will always be something of a king without a crown. 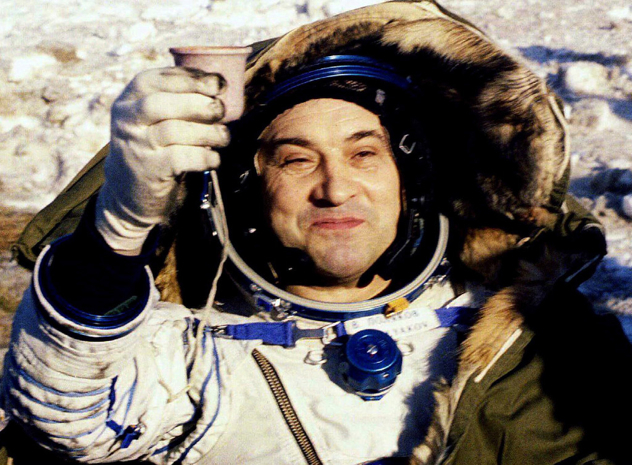 “If you like waterbeds you’re going to love zero gravity…”

If there had been an exclusive marathon for astronauts, there’s no doubt that Valeri Polyakov would have won it. He experienced his first spaceflight as a researcher onboard Soyuz TM-6. The Soyuz linked up with the Mir space station, where Polyakov spent a whopping two hundred and forty days in space, studying the effects of micro-gravity on humans.

On January 8, 1994—this time as a doctor-cosmonaut on the Soyuz TM-18 flight—Polyakov returned to Mir. He spent the next 437 days in space, a world record that still stands today. During his stay on the space station, he conducted medical and physiological research. He orbited the earth 7,075 times and traveled 186,887,000 miles before landing back safely on March 22, 1995.

Dr. Polyakov left the Russian space service shortly after his return, after accumulating a then-record total of 678 days in space. Even though many of his records have been broken since then, Polyakov is famous as the first astronaut to make space his second home. 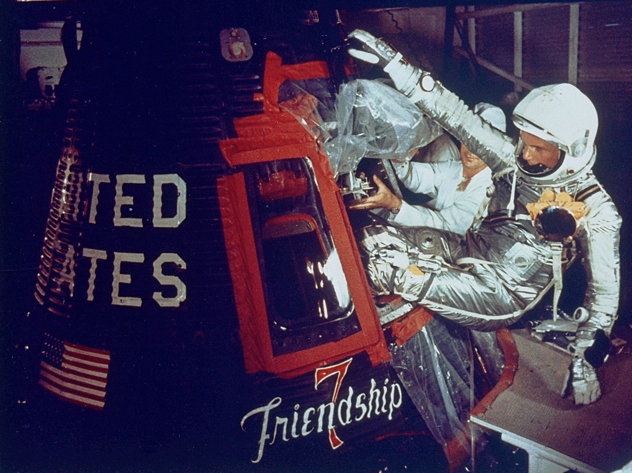 John Glenn made history in 1962, when he became the first American to orbit the Earth. But even before that, John had been a war hero who had flown fifty-nine combat missions during WWII. In 1959, Glenn took on a new challenge after he was selected for the U.S. Space Program. He and six others—including fellow legend Alan Shepard—were put through incredibly difficult training, and together they became known as the “Mercury Seven.”

Glenn orbited the Earth three times during his mission, which lasted nearly five hours. After this success, he became an American hero and a household name. He was feted with parades, and received numerous honors. President John F. Kennedy even awarded him the NASA Distinguished Service Medal, and the two eventually became personal friends. It is believed that Kennedy was the one who encouraged Glenn to consider a life in the public service. After a few failed attempts, he was elected to the US Senate in 1974. 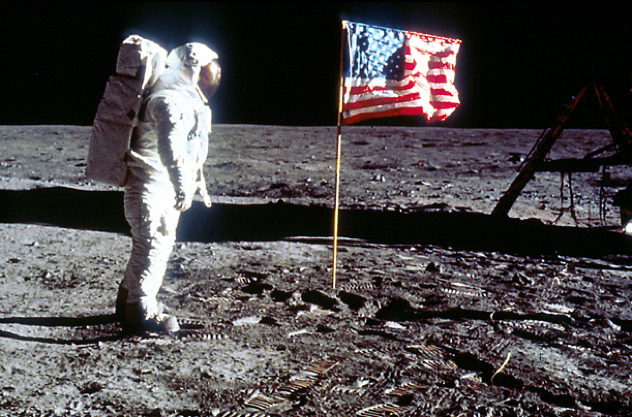 “Exploration is wired into our brains. If we can see the horizon, we want to know what’s beyond”

Buzz Aldrin is probably the second-most popular member of Apollo 11, and was one of the first people to walk on the moon. Aldrin—along with flight commander Neil Armstrong—made the historic Apollo 11 moonwalk, becoming the first two humans to set foot on the moon. They spent a total of twenty-one hours on the moon’s surface, and returned with forty-six pounds of moon rocks.

The historic walk was broadcast around the globe to an estimated six hundred million people—the largest TV audience in history. Upon his safe return to Earth, Buzz was decorated with the Presidential Medal of Freedom and his own star on the Hollywood walk of fame. 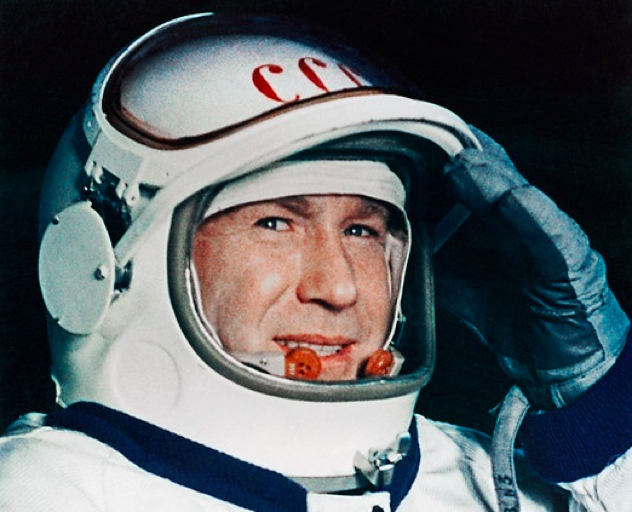 Leonov is a legendary Soviet cosmonaut, and the first man to leave the spacecraft and take a spacewalk. He left the Voskhod 2 spacecraft and spent twelve minutes floating alongside, attached by a tether. He practiced free-fall maneuvers, made observations, and even took a short motion picture. When he attempted to return to the capsule, he found that his suit had over-pressurized to the point where he couldn’t fit though the hatch. He had to release the excess air before he could get inside.

Leonov is the only surviving member of the legendary Voskhod programme, and his legacy can be spotted in Arthur C. Clarke’s novel, “2010: Odyssey Two.” 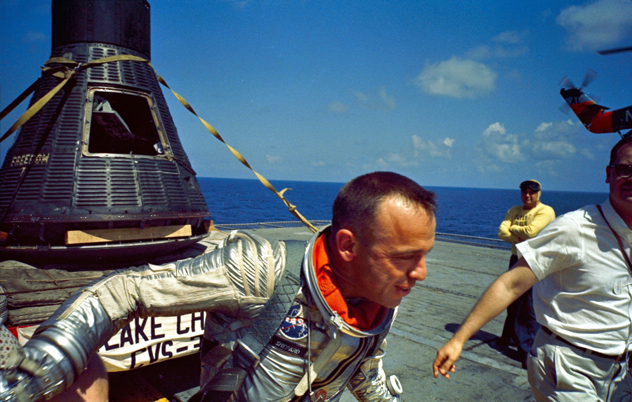 “I must admit, maybe I am a piece of history after all”

Shepard enjoys the honor of being the first—and so far the only—man in history who played golf on the moon. Unfortunately for Shepard, this is not a sports list; such an accomplishment can’t help his ranking, but it still makes him pretty awesome.

Early in 1961, NASA chose Shepard over Glenn and Grissom, the two other finalists, to be the first American in space. After his historic flight, Shepard’s thirst for adventure remained unquenched, and looked forward to future missions. On January 31, 1971, Apollo 14 blasted off from Cape Kennedy, nearly ten years after Shepard’s first space flight. He commanded the Apollo 14 mission, piloting the lander to what was the most accurate landing of all the Apollo missions. He became the fifth person to walk on the moon, and the only member of the Mercury Seven to do so. Alan Shepard will be remembered both as the first American in space; as one of a handful of moon-walking pioneers; and certainly as the first human being to play sports on another planet. 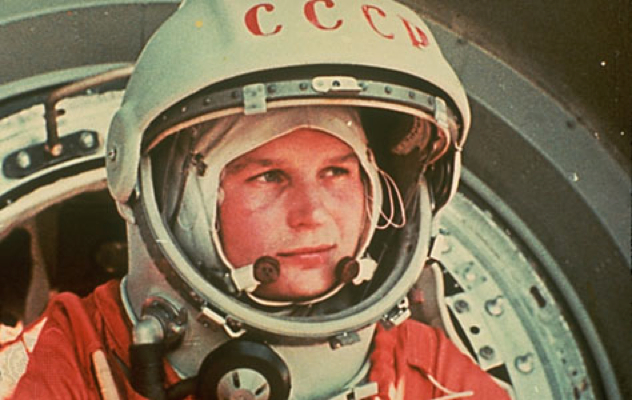 “If women can be railroad workers in Russia, why can’t they fly in space?”

Valentina Tereshkova was the first woman in space, orbiting the Earth in June, 1963, at the young age of twenty-six. Her excited and lively voice was broadcast to people all around the world: “It is I, Seagull!”

The image of a seagull soaring on high seemed to fit the young cosmonaut perfectly, and thereafter she came to be known affectionately as “Seagull” by people throughout the world. Valentina Tereshkova was an ordinary cotton mill worker, who managed to accomplish something quite extraordinary.

According to the Soviet propaganda machine, her flight showed the world that in a socialist state, women could achieve just as much as men—and that they were even encouraged to reach for the stars. The reality, however, was that Tereshkova’s three days in space were nothing more than a political stunt to upstage the Americans; no more Soviet women would enter space until 1982, nearly twenty years later. 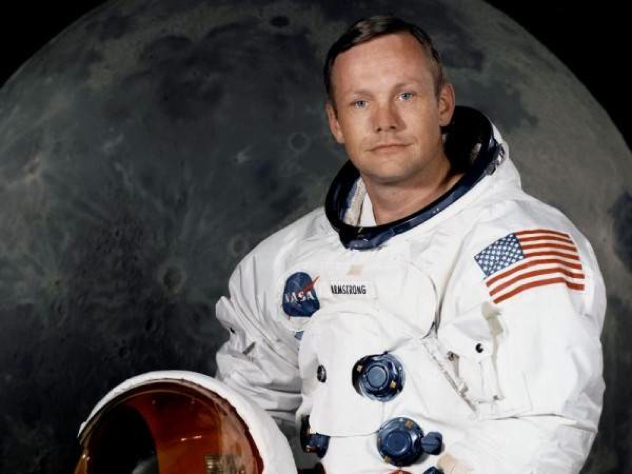 “That’s one small step for [a] man, one giant leap for mankind”

Neil Armstrong was one of the most influential figures of the twentieth century. As a young man, he took an active part in the Korean War, and received the Korean Service Medal. After his service he returned to University, eventually graduating with a bachelor’s degree in aeronautical engineering. In later life, he took a teaching position in the Department of Aerospace Engineering at the University of Cincinnati.

These are all fair accomplishments, of which any person would be proud. But they’re nothing compared to the journey that made Armstrong famous around the world. As we all know, he became the very first human to ever walk on the moon, on July 21, 1969. 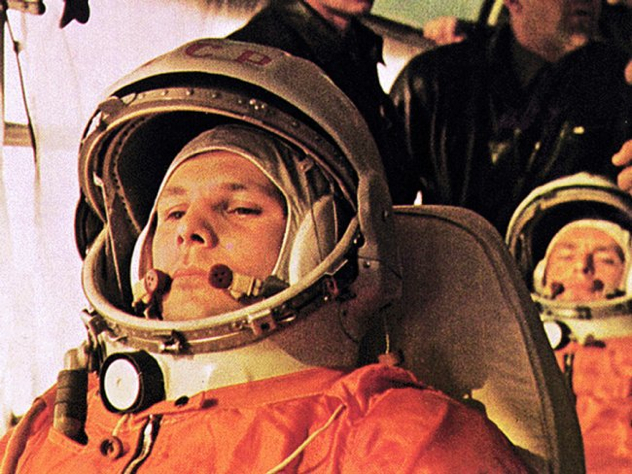 Yuri Gagarin is the prototype of all future spacemen—and except for that of Neil Armstrong, his name is probably the most recognized of all astronauts to this day. He became the first human to enter space, and the first to orbit the Earth—giving a huge boost to the Soviet space program, and intensifying the space race with the United States.

After the flight, Gagarin became a global celebrity, and one of the very few Soviets who was allowed to tour the West. He visited numerous countries, such as Germany, Italy, Canada, Brazil, Japan, and China, with the aim of promoting the Soviet Union’s accomplishment of putting the first human in space.

He was greeted everywhere as a hero, despite the petty politics of the Cold War. Three months after the Vostok 1 mission, he even visited the United Kingdom, where he was worshiped like no other Soviet in history. He remains the most decorated astronaut of all time, having received honors and medals from more than twenty-five different countries.