Every day, NASA scans the galaxy in search of new planets, stars, and systems dispersed throughout the cosmos. We have sent many probes into space, from Voyager 1 to Juno, all with the task of first exploring our solar system and later investigating beyond it.

The Kepler spacecraft has discovered the most exoplanets, which are planets orbiting stars other than our Sun. As you’ll notice, many planets are named Kepler because of this.

Although we find tons of new exoplanets every year, many are just cold lumps of rock orbiting distant, unknown stars. Occasionally, however, a planet is found that is bizarre enough to make even the most seasoned astrophysicist gape in awe. We’ve rounded up 10 of them for you. 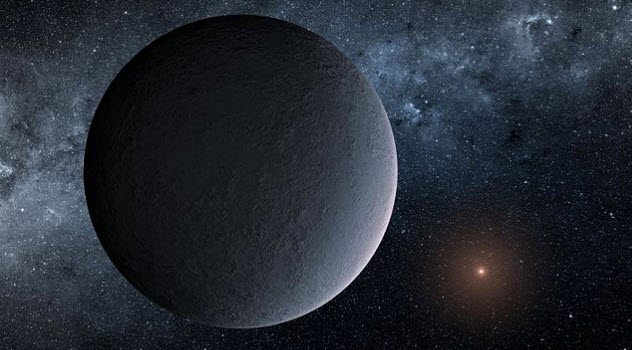 A light-year is a measure of relative distance, somewhere that’s one year away if you’re traveling at the speed of light. That speed is equal to almost 300,000 kilometers per second (186,000 mps) or over 1 billion kilometers per hour (670 million mph). So you have to travel a long way at high speed to see this huge ball of ice.

So far, the fastest speed we’ve ever reached in space occurred with New Horizons, a space probe launched in 2006 to conduct a flyby study of Pluto, its moons, and the Kuiper Belt. New Horizons sped along at over 58,000 kilometers per hour (36,000 mph), a far cry from the speed of light. So you can see that we don’t have the technology yet to visit our nearest neighboring system only a few light-years away.

That’s why we use long-range technology to discover distant exoplanets as well as to determine their mass and the makeup of their atmospheres. OGLE-2016-BLG-1195Lb was found using microlensing, a process used to discover planets when they pass in front of their stars and we see the stars dim briefly.[1]

All the ice on OGLE-2016-BLG-1195Lb is thought to be freshwater. Although this is good, it’s unlikely that we will be able to use this water in the foreseeable future. It would take 13,000 years to get to this exoplanet traveling at the speed of light. Perhaps an advanced alien race uses this faraway planet as a source of freshwater. 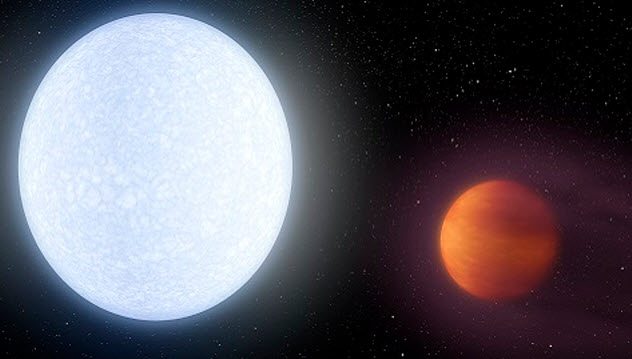 KELT-9b is the hottest exoplanet ever found, and it’s disappearing! At 650 light-years away from us, KELT-9b is tidally locked with its star, meaning that one side is constantly facing the star and one side is not.[2]

The gas giant is approximately three times the size of our Jupiter and burns at a temperature of 4,315 degrees Celsius (7,800 °F). This is hotter than most stars and almost as hot as the surface of our Sun, which burns at 5,505 degrees Celsius (9,941 °F).

A few million years from now, KELT-9b will have burned off all its gases and will disappear, leaving nothing but its lonely star. 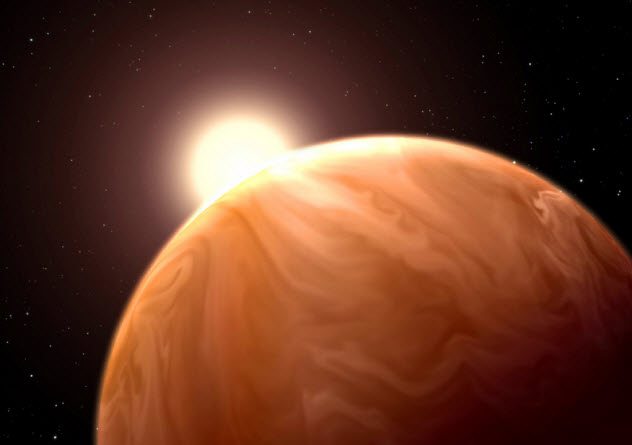 GJ 1214b is a huge “waterworld” three times the size of Earth that can be found 42 light-years away from our solar system. Earth’s water is equal to 0.05 percent of its mass, while GJ 1214b’s water contributes 10 percent of its mass![3]

We’ve only explored about 5 percent of our oceans, and we’ve found countless astounding creatures that we never expected to exist. Imagine what horrors lie within the deep waters of GJ 1214b! 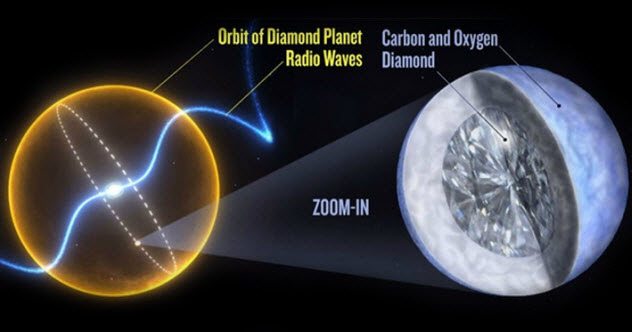 A large, carbon-based planet with a diameter roughly five times that of Earth, PSR J1719-1438 b can be found about 4,000 light-years away from our solar system. Due to immense pressure caused by the planet’s gravitational pull, the carbon has been condensed, forming a gigantic diamond.

This exoplanet orbits a millisecond pulsar named PSR J1719-1438. Astronomers believe that the pulsar was once a massive star that became a stellar corpse in a supernova. These rare millisecond pulsars are supposedly formed by eating the material from a companion star.

In this case, the companion star was probably a white dwarf, which is what our Sun will become when it dies. A white dwarf is a remnant that has no more nuclear fuel.

Here, the millisecond pulsar probably ate the material from its companion white dwarf. With only 0.1 percent of its mass left, the white dwarf then formed an exotic crystalline companion to the pulsar—the diamond planet.[4] 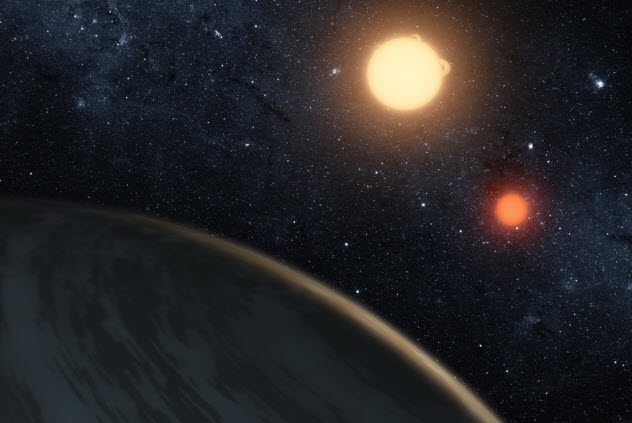 Kepler-16b is essentially the real-life equivalent of the Star Wars planet Tatooine. This is because Kepler-16b is one of the only exoplanets ever found that orbits a binary star system.[5]

Kepler-16b has the mass of about 105 Earths and is 8.5 times the radius of our world. This exoplanet has an atmosphere comprised of hydrogen, methane, and small amounts of helium. Approximately 200 light-years away from our solar system, Kepler-16b completes an orbit around its two stars in 627 of our Earth years.

Although it may look like Tatooine, Kepler-16b cannot support life. So don’t expect to find any droids there! 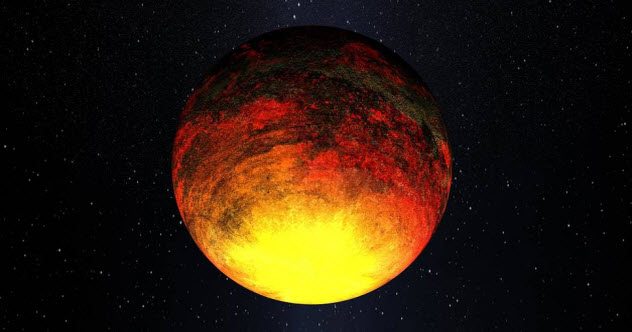 Kepler-10b is the smallest exoplanet discovered to date, and we believe that the surface is covered by oceans of lava. About 560 light-years away from Earth, Kepler-10b was the first rocky planet found outside our solar system, marking mankind’s first step toward a future of space exploration.

The surface reaches temperatures as high as 1,400 degrees Celsius (2,500 °F).[6] As a result, rocks on the surface melt, pooling in large areas and causing huge lava oceans scattered across the exoplanet’s small surface. Due to its high density, it’s believed that Kepler-10b contains a high amount of iron, which would cause the lava to appear a brighter shade of red. 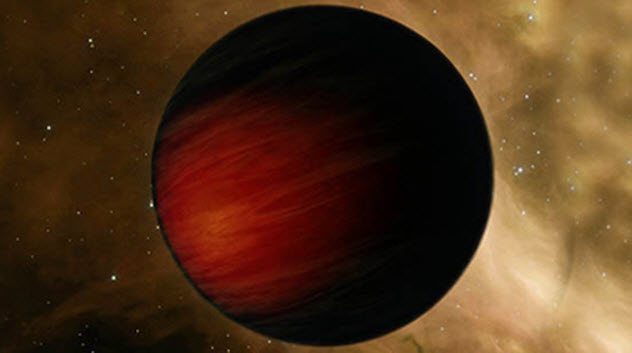 TrES-2b is the darkest exoplanet ever found, reflecting less than 1 percent of the sunlight that hits it. This makes it darker than coal or black acrylic paint. It’s actually a miracle that we found the planet because the light was so scarce.

This raises an important question: How many exoplanets have we missed due to the lack of light?

TrES-2b is about 750 light-years away from our solar system.[7] Its atmosphere contains vaporized sodium, potassium, and titanium oxide—all of which absorb light. However, it is still a mystery as to why the planet is so dark, a mystery that may never be solved.

Perhaps an alien race inhabits this strange planet and we just don’t know about it. 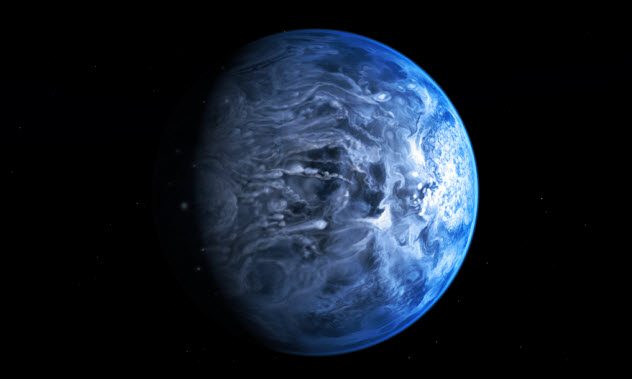 Perhaps one of the most interesting exoplanets on this list, HD 189733b, which is 63 light-years away, rains glass.[8] Sideways. Yes, you heard that right. This hellish planet’s winds can reach speeds of up to 8,700 kilometers per hour (5,400 mph), causing any strange precipitation to fall sideways.

A silica-concentrated atmosphere causes the planet’s clouds to rain molten glass, which hardens as it falls. HD 189733b’s wind pushes the glass at such speeds that the shards fly through the air horizontally, slicing up everything in their path. Imagine getting stuck in that storm! 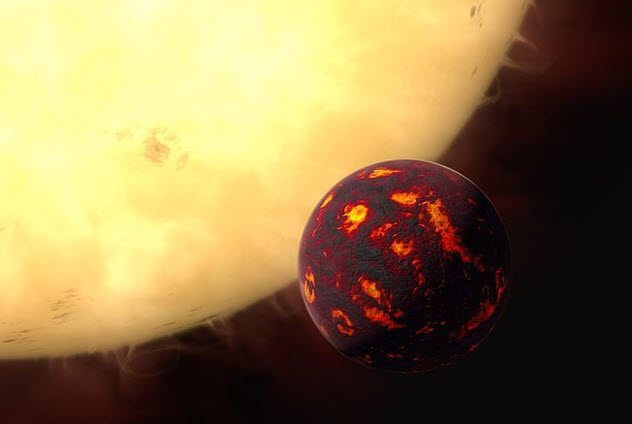 55 Cancri e is tidally locked with its sun and has water on its surface that is both a liquid and a gas. This exoplanet orbits 25 times closer to its star than Mercury does to our Sun and completes its orbit in only 18 hours.[9] That’s extremely fast.

Since 55 Cancri e is tidally locked with its star, one side constantly faces the sun and the other does not. As a result, the water facing the star is in a supercritical state, causing it to be both a liquid and a gas at the same time.

55 Cancri e has mass of around 7.8 times that of Earth, and it is roughly twice our planet’s size.

1 CoRoT-7b
The Planet That Snows Rocks 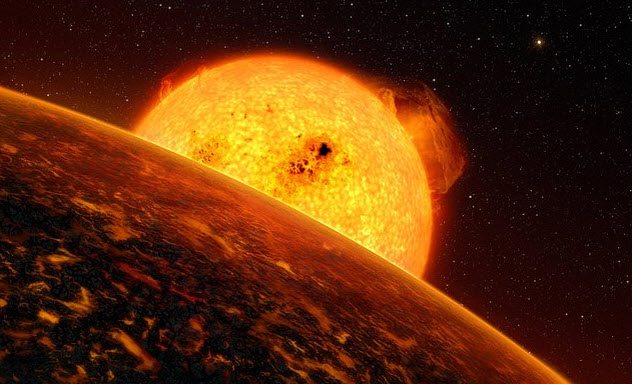 CoRoT-7b is a bizarre exoplanet because it snows rocks!

Lava on the star side is heated so much that it evaporates much like water does on our planet. This creates large stone clouds that later condense on the relatively cooler side of the planet, where it rains large rocks. If we could survive the extreme temperatures of this planet, it would be a sight to see.

On the hotter side, it rains magma. On the colder side, the magma hardens before hitting the ground (much like snow does on Earth). This creates rock snow that would kill you if you happened to be in its presence.

I am relatively new to Listverse, and I see this as a great opportunity to not only earn a bit of money but to better myself as a writer!

Read about more fascinating planets on 15 Fascinating Planets Outside Our Solar System and 10 Terrifying Planets You Don’t Want To Visit.