A series of accounts of the more dangerous creatures on the planet, including the animals with the worst claws or teeth imaginable, have gripped Listverse readers. However, persona and character can play an even greater role in assessing the danger posed by an animal. In this unsettling account, we take a new perspective on animal danger by reviewing the species with the worst personalities and greatest predilections towards absolutely ferocious behavior. We discover the most bloodthirsty carnivore, Earth’s most hostile snake species, and learn why “Taming the Shrew” is doomed to fail. 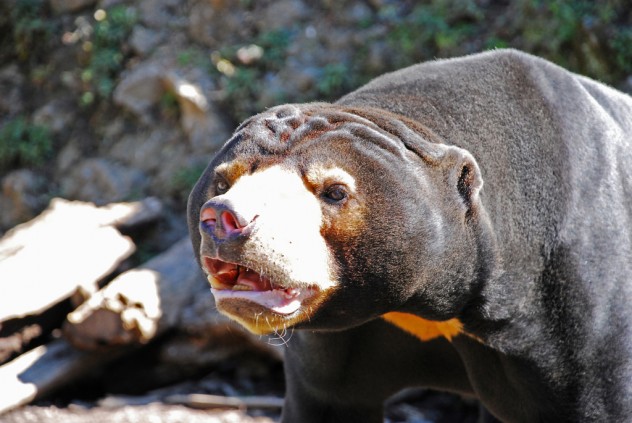 Bears possess some of the most disagreeable personalities in the animal kingdom. While the Grizzly Bear immediately comes to mind as the most ferocious and dangerous bruin, it is actually a gentle giant compared to the true black sheep of the ursine rogue’s gallery. Weighing just 65 kilograms and measuring 1.5 meters in length, the Asian Sun Bear is the world’s smallest bear species, and the most ferocious, with the largest teeth in proportion to body size. This small beast is the most fierce bear on the planet, and will attack humans without provocation. A number of fatal maulings have occurred from an animal considered by some to be the most dangerous in the jungle. Unfortunately for the rainforest, this keystone predator is endangered. 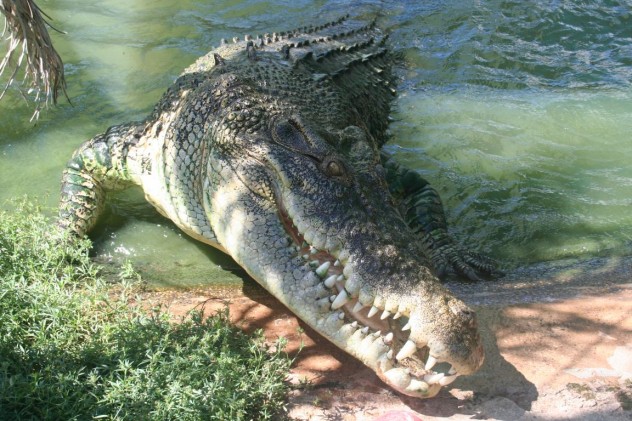 Forget the “Gentle Giant”—The world’s largest reptile also carries the most ferocious disposition. Saltwater Crocodiles reach lengths of over seven meters (23 ft) and may weigh up to 2,000 kg (4,400 lbs). Possessing immense jaws capable of the world’s most powerful bite, the full grown “Saltie” is not only the most physically capable killer among reptiles, but is considered the most aggressive, actively predatory and territorial crocodilian species. This super-reptile tends to view human prey as a simple meal, and they will rather casually consume humans on sight. Salt Water Crocodiles may also destroy boats and kill human and large animal intruders during territorial defense. 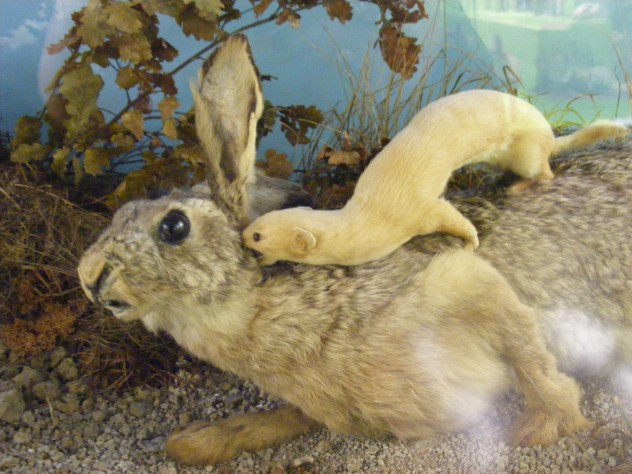 The Least Weasel is the world’s smallest carnivora. Just as the Sun Bear is the smallest, but most aggressive bear, the smallest carnivore is also the most ferocious hunter, pound for pound. Weighing only a few ounces and measuring around 20 centimeters, the unbelievably aggressive, hamster sized Least Weasel is capable of killing a European Rabbit up to five times its own size. With the immense size difference, the tiny beast appears more like a parasite than a predator as it latches onto the neck of its larger prey items and drains blood from the jugular vein. The Least Weasel will also kill any small bird, amphibian or mammal it encounters with a bone-crushing bite. The same ferocity may utilized in territorial defense. 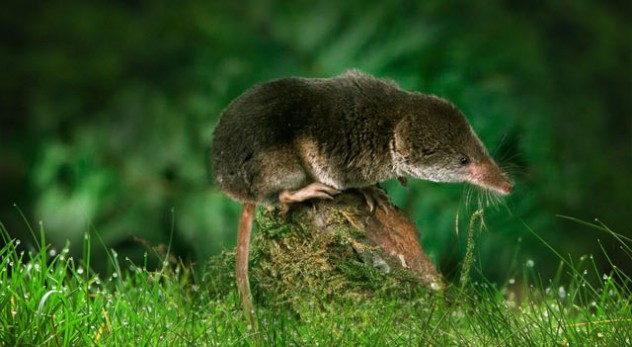 “Taming of the Shrew” makes an excellent title for a Shakespearean Comedy, it would be next to impossible to civilize these somewhat bloodthirsty insectivores. Shrews resemble mice, but are in fact related to hedgehogs as a member of the insectivore group. Shrews distinguish themselves by their incredibly high metabolism, which gives them an extraordinarily high strung and vicious disposition. Shrews must eat constantly, and in order to sustain themselves, they savagely attack prey twice their own size, including mice, fish and frogs. Shrews can inject venom when they bite, but they normally kill by crushing the base of the skull. Shrew aggression is extremely hazardous to any animal that approaches, but the tiny beasts are so high strung that they have been known to drop dead from the stress of surprise before they can savage their adversary. 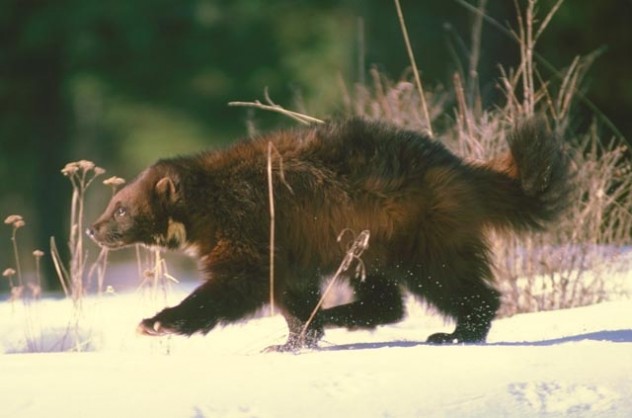 Resembling a miniature bear, the Wolverine is in fact the largest member of the weasel family. This stocky beast with iron jaws is notorious for possessing an almost demonic ferocity greatly out of proportion to the animal’s size. While some species are notable for their outright aggression, the Wolverine distinguishes itself as a public enemy through its absolute lack of fear while hunting. Weighing 15 to 30 kilograms, this overgrown weasel has been known to bring down deer, elk and mountain goats in a spectacular David and Goliath predation routine. Attacks on humans are devastating and may be fatal, but fortunately, this killer hermit rarely encounters man. Wolverines prey on wildcats, and will even challenge bears in territory disputes. 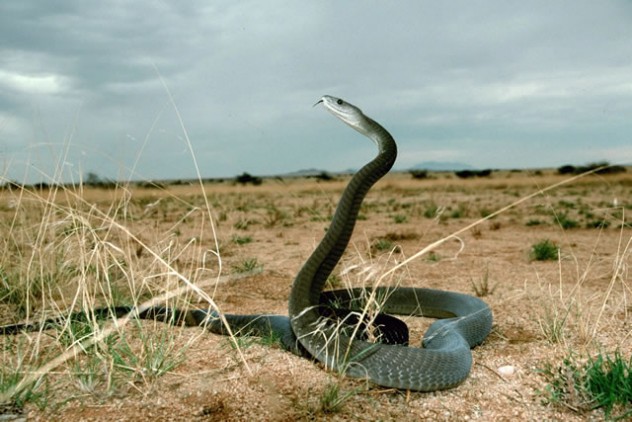 Cloaked in the color of death and measuring over 14 feet in length, the Black Mamba is regarded as one of the most vicious snakes on the planet. It is also one of the most venomous. The Black Mamba is a habitat generalist, which means it can appear in any environment within its vast African range, including swamps, grasslands, and even villages. Unlike many animals, which simply have an anger problem, Black Mambas are driven by an extreme form of fear-based aggression. Being exceedingly nervous, the slightest sense that the snake’s escape route is compromised may unleash an attack of unparalleled ferocity. As if that wasn’t enough, at 20 km (12.4 miles) per hour, the Black Mamba is also one of the world’s fastest serpents. 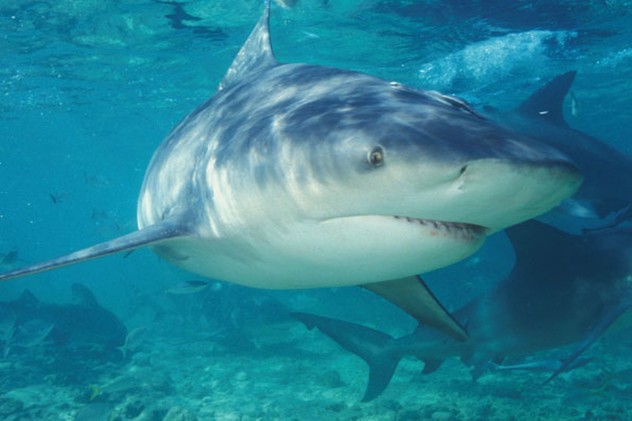 It may come as a surprise that the Bull Shark, and not the Great White Shark or Tiger Shark wins the “worst in the water” award. The Bull Shark is endowed with an extremely aggressive personality, and is in fact considered by scientists to be the most vicious fish on the planet. The shark’s predilection for attacking humans in shallow water has led to many fatalities and may be to blame for a number of mysterious disappearances. The supremely ferocious fish has the strongest bite of all sharks, with a force of up to 6000 newtons. Even more disturbingly, the shark can adapt to freshwater, and has appeared in a number of rivers and lakes in warmer regions, and even flooded streets. 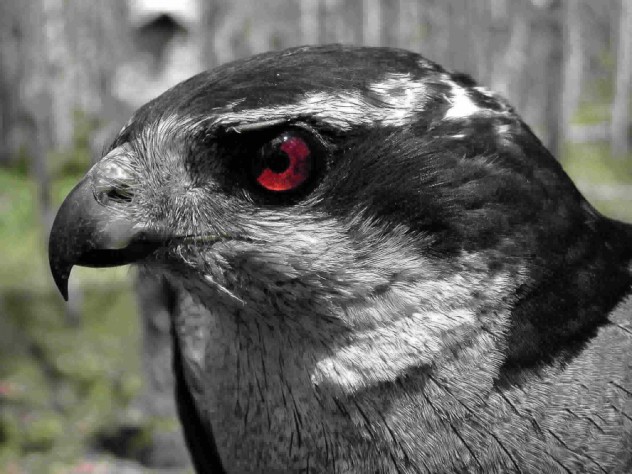 The Northern Goshawk is the largest of the bird eating forest hawks, with a wingspan of 4 feet. Fierce red eyes, dark grey feathers and massive talons to take down large prey add to its terrifying appearance. Its extremely territorial behavior presents danger and incredible displays of feathered ferocity. If a human appears to be a threat to the Goshawk’s nest, this ferocious raptor will swoop down and deliver scalp ripping blows. The Northern Goshawk is a species at risk in some jurisdictions due to persecution and habitat loss, but their tendency to turn on anything presenting the slightest threat proves they are still very skilled in self defence. Even more disturbingly, Goshawks often begin eating large prey items such as ducks while they are still alive. 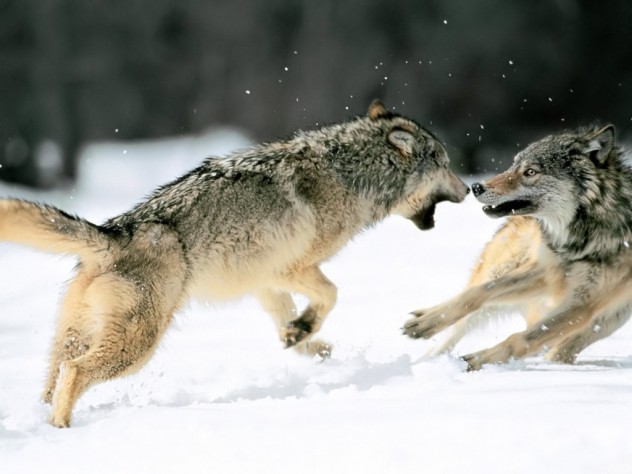 The Wolf has been featured in a range of widely exaggerated legends attesting to its alleged ferocity throughout history. A backlash of information promoting the peaceful elements of the lupine personality has overtaken the fearful drama of the past. What has been lost from sight is the true ferocity of the wolf that conspired to create the legends in the first place. To bring down large prey such as moose, wolves attack in packs, attaching themselves to the muzzle and tear pieces off, causing the prey to bleed to death. The wolves may begin feeding before the prey is dead. Humans are not entirely safe from wolves and attacks, though rare in North America, are more frequent in Russia. 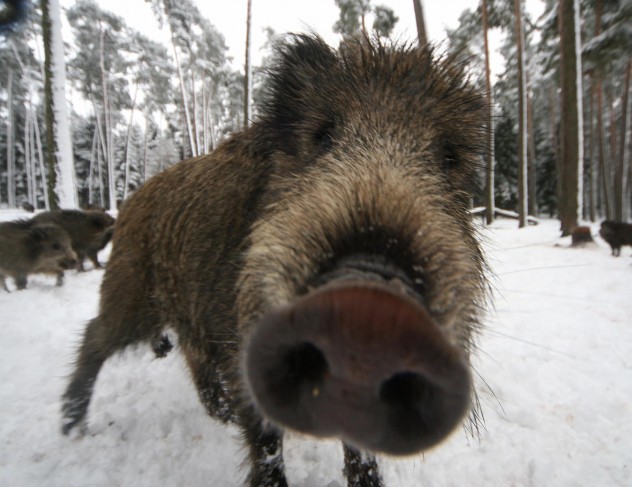 Just as the Gray Wolf remains as a fully wild version of our domestic dogs, the Wild Boars that gave us our domestic pigs present a stark and at times exceedingly dangerous contrast to the domestic animal. Wild Boars are located across Europe and Western Asia, inhabiting a range of woodland and farmland habitats. While our habit of eating pigs causes us to think of them as prey items, the Wild Boar is a hunter in its own right, and may even bring down deer. These animals frequently place humans on the run with their extremely bad temper and tendency to attack in a ferocious flurry of razor sharp tusks. Wild Boar charges may at times be fatal due to the power and mass of the enraged animals, which may respond with force to any perceived invasion of territory.

Ron Harlan investigates of the mysteries of nature and the bizarre findings that often crop up on this planet. He is a freelance writer and student of science. Contact Ron for engaging written content