There are many medical oddities throughout the world. As long as you know where to look, you’re more than welcome to go and gaze in wonderment and/or disgust at these curious little finds. 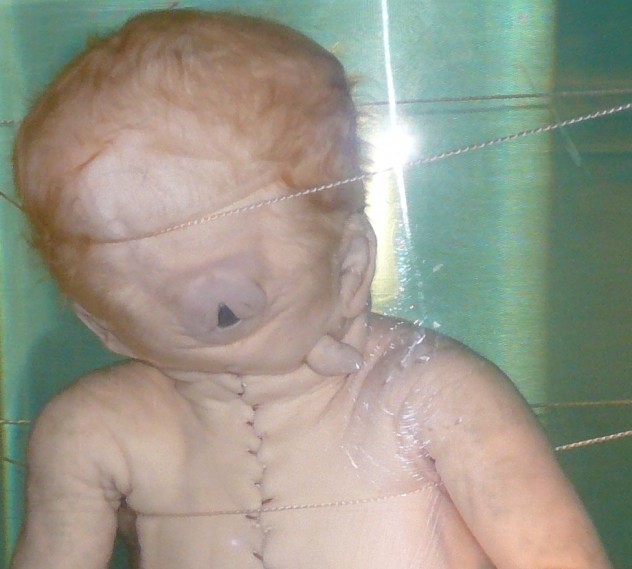 Nineteenth-century father/son anatomist duo Gerardus and Willem Vrolik had a bit of a thing for human mutants. In an 1834 medical paper, Willem explored “cyclopia.” Cyclopia is a rare birth defect in which the embryo has not properly formed two separate eye sockets, resulting in one central cavity. The chances of an embryo—human or otherwise—suffering from cyclopia is one in 16,000. However, most cyclopia embryos are aborted or delivered stillborn.

The Vroliks collected multiple cyclopes: five of humans and 19 of an assortment of pigs, lambs, and a cat. They can all be found in the collection of the Museum Vrolik in the Department of Anatomy and Embryology of the University of Amsterdam.

Discover more macabre medical curiosities like these in the one-of-a-kind Mutter Museum Book of Historical Medical Photographs at Amazon.com! 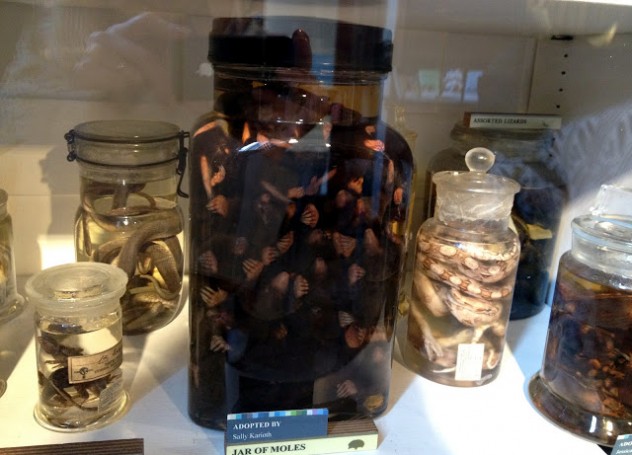 A jar of moles? Yup. That’s right. Eighteen moles packed into a glass jar. This might not be the most grisly of specimens out there but it truly is visually fascinating. It’s certainly one of London’s hidden gems. In a museum where there’s an anaconda skeleton, dodo bones, and an extensive brain collection, it’s still the moles that take top billing. Why the moles were put in the jar will probably never be known. 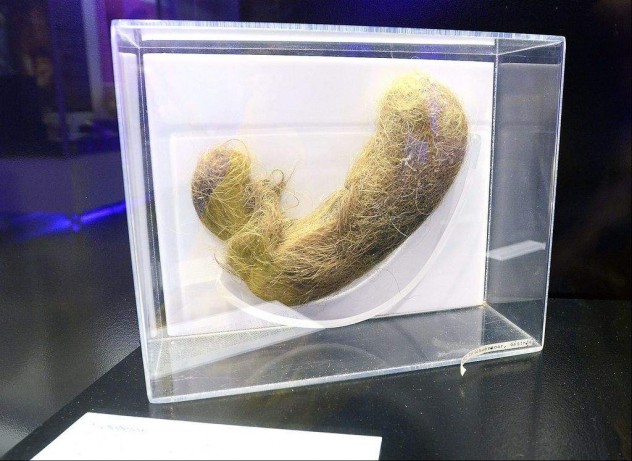 Cats can sleep all day if they want, but they also suffer from bezoars—masses of indigestible matter that cannot be consumed, more often called hairballs. Cats, however, are not the only animals to suffer from this rather revolting and uncomfortable ailment. Cows, oxen, sheep, goats, llamas, deer, and antelopes also have them. But there’s one other animal on that list: the National Museum of Health and Medicine has several alarming specimens of human hairballs. The largest trichobezoar (human hairball) ever recorded was removed from the stomach of a 12-year-old girl who had a habit of compulsively eating her own hair.

Within the walls of Thailand’s oldest hospital is the “Museum of Death,” as it is known to the locals. The museum has six different sections: pathology, forensics, history of Thai medicine, parasitology, anatomy, and prehistory.

One of the most fascinating items is a preserved severed head. But this isn’t any regular severed head (not that severed heads are all that common, of course). This head is sawed in half in order to demonstrate the path of a bullet that passed through it. The cross-section clearly shows the hole where the bullet traveled through the skull as well as the damage it left in its wake. 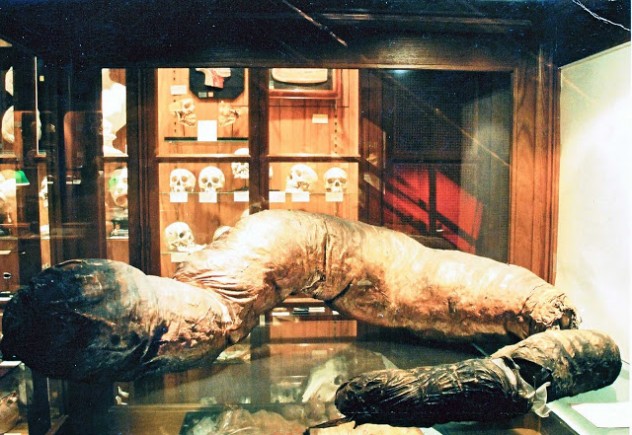 Mega colon: sounds like something out of a 1950s B-movie, doesn’t it? This pathologically enlarged colon is a horror story all by itself. Hirschprung’s disease begins when the nerve endings in the colon fail to completely develop in the womb. This leads to certain muscles never receiving signals to contract and shift waste down through the digestive system (translation: extreme constipation). The result is an over-developed colon—in this particular case, it became eight feet long and weighs 40 lbs. To drive home the point, the museum has included a wax model of a normal-sized colon beneath the Mega Colon. The difference in size is, quite frankly, crazy. 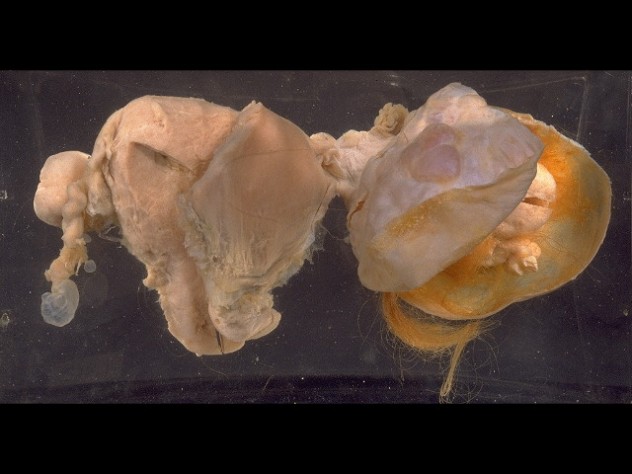 Housed in the University of New South Wales, you’ll find all manner of diseased human flesh, including damaged hearts and lungs. One of the most arresting specimens on show is a benign teratoma of the ovary. An ovarian teratoma is a germ cell cancer that confuses the cell growth of the ovary. In extreme cases, this can cause tumors that resemble partially formed fetuses with hair and teeth, exactly like the one pictured above. Although the Museum of Human Disease was founded in the 1960s for pathology and medicine students, it finally opened its doors to the general public in 2009 in the hope of shining a light on such illnesses. 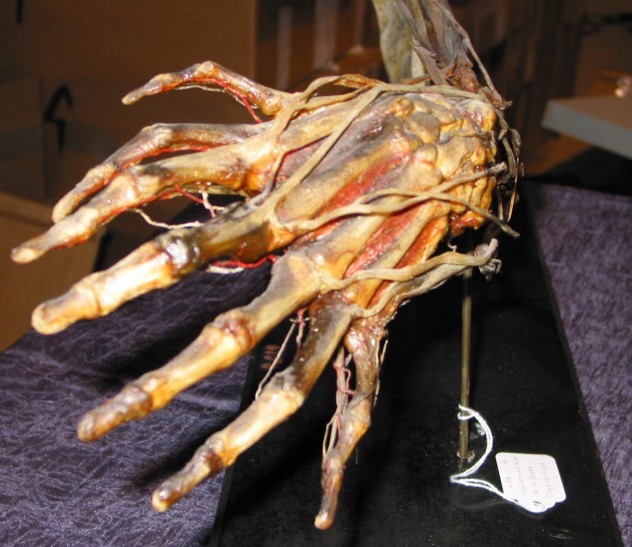 In an underground chamber beneath the Sansevero Chapel in Naples are two of Europe’s most grisly finds. Two skeletons, a man and a pregnant woman standing side by side, are encased in glass, both with their circulatory systems almost perfectly intact and exaggerated by color—blue for the veins and red for the arteries.

The “Machines” were created by 18th-century physician Giuseppe Salerno, and they’re two of the most perfectly preserved bodies in the world. But the coloring and the preserved circulatory system as a whole are a point of some debate. Some have said that although the skeletons are evidently real, the veins and arteries may not be; they may be a concoction of beeswax, iron wire, and silk. However, there are also those who believe in a rather spookier version of the story that says Salerno was a dark sorcerer who killed his victims by injecting them with a hardening agent in a process called “human metallization.” But the truth is, 250 years after the works were created, it’s impossible to say. One thing is for certain, though: whether these two bodies were embalmed for the purpose of study or locked in a show of viscera for more macabre purposes, these medical marvels were well ahead of their time.

A man who’s turning into a tree and little girl with inside-out organs – it’s all in Medical Mysteries: From the Bizarre to the Deadly at Amazon.com! 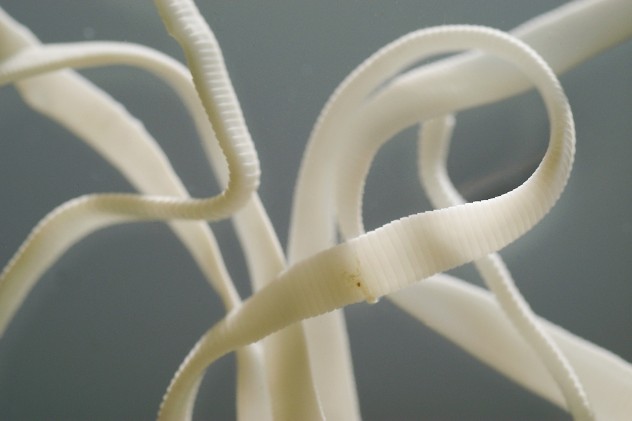 The world’s only parasite museum houses some of the creepiest stuff you’ll ever encounter. Taking top spot on the creep-out podium is the world’s longest tapeworm. The 8.8-meter (28 ft) Diphyllobothrium nihonkaiense (even the name is long) was removed from the stomach of a Japanese man who complained of stomach pains after eating trout.

Alongside the worm is a tactile aid—a piece of rope with an identical length and girth so visitors can imagine the tapeworm coiled around their gut. If you aren’t actually in the museum right now, do this quick calculation: the average giraffe is 5.5 meters (16 ft) tall and this worm is three meters (9.8 ft) longer than that. 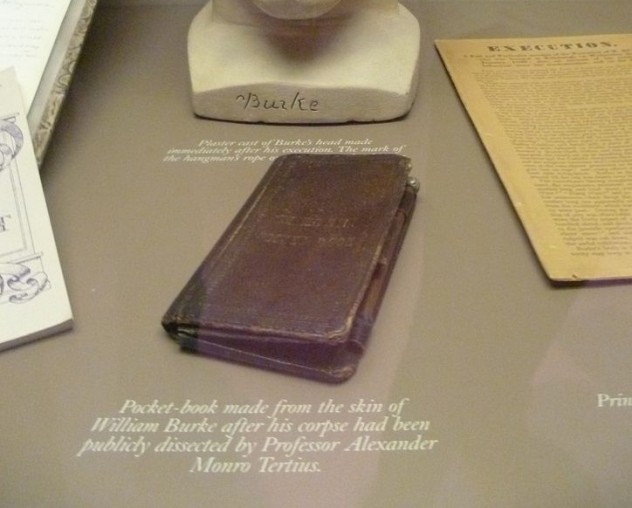 Two of Scotland’s darkest characters were William Hare and William Burke. Burke and Hare were two 19th-century murderers who sold their victims’ bodies—totaling 16—to Dr. Robert Knox, who dissected the bodies at his well-respected anatomy lectures. After the killers were caught, Hare turned on Burke, earning himself immunity, but earning the rope for Burke.

In the museum, located in the Royal College of Surgeons, you’ll find a grisly artifact of the Burke and Hare murders. Although it looks like an old, tatty book, the “leather” it’s bound in would strike you as particularly dark. Inscribed on the book are the words: “EXECUTED 28 JAN 1829.” This isn’t normal leather: the book is bound in the flesh of William Burke—or what was left of him after he was hanged and dissected.

1The Horseman Of The Apocalypse
Musée Fragonard, Paris, France 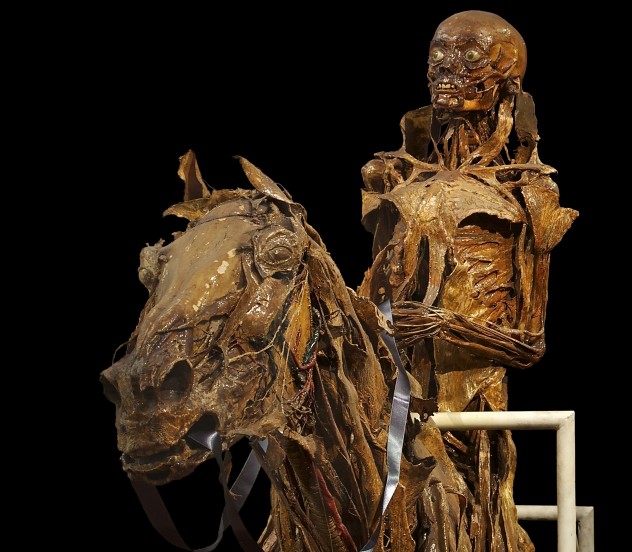 Honoré Fragonard was a bit of an odd sausage to say the least. The anatomist, who lived from 1732 to 1799, was a pioneer of his day. “Ecorchés” are flayed figures depicting the body without skin—essentially a naked body of muscles. Before Fragonard came along, ecorchés were imagined works of art: paintings and sculptures of the male or female form. Fragonard, however, had other ideas. He created his ecorchés from actual corpses.

In one of world’s oldest veterinary schools, the École Nationale Vétérinaire d’Alfort, you’ll find the remainders of Fragonard’s masterpieces. He flayed roughly 700 bodies in his time, but only 21 remain. All 21 are on display in Paris.

The most famous is of a man riding a horse—an homage to a famous series of woodcuts by 14th-century artist and theorist Albrecht Durer. Both horse and man are flayed . . . but that’s not all. “The Horseman of the Apocalypse” is surrounded by human fetuses, which are riding on the backs of horse and sheep fetuses. Told ya: odd sausage.

10 Attempts to Use Magic and the Supernatural to Win Wars