The Amazon is home to myths and legends that are as vast and mysterious as the jungle itself. Some have ancient roots, and others are urban legends that evolved after the European conquest. But one thing is true across the board: The Amazon is filled to the brim with wonder and mystery. 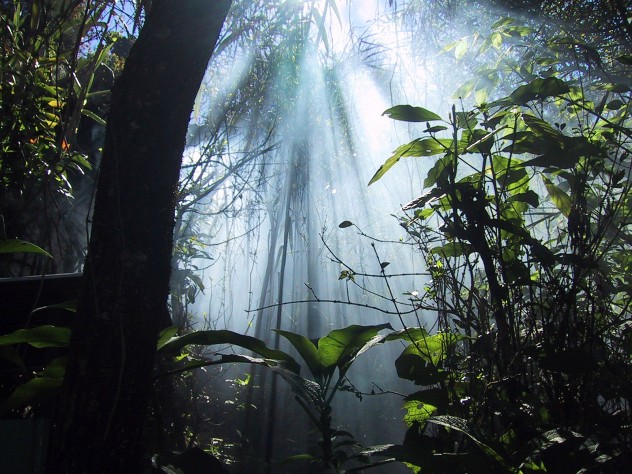 El Tunchi is an evil spirit that haunts the jungle and terrorizes people with an eerie, whistling sound. Some say he’s an amalgamation of all the souls that have perished in the rainforest, while other legends describe him as the ghost of a man who became lost and died in the jungle.

El Tunchi is angered by anyone who disrespects the natural environment. He is also drawn to people who respond to his whistle. Not doing so is easier said than done—the whistle gets increasingly louder and higher pitched, and listeners have an unbearable urge to mimic the tune. Those who answer his call are sure to meet a hideous death. 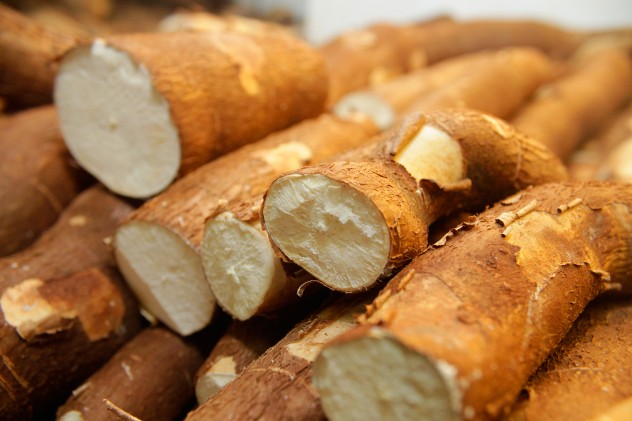 The mandioca is a staple of the South American diet. It’s a starchy, tuberous root with a surprising number of uses. Some might say this versatile and important food was a gift from the gods, and it has a mythical origin story.

The daughter of a local chief mysteriously became pregnant, which brought shame on her father and home. She swore she’d never been with a man, but she was still banished from the village and forced to live in isolation. When villagers later brought her food, they were shocked to see that she’d given birth to a baby girl (named Mani) with skin as white as the moon. When news of the miraculous child spread, the chief’s daughter and child were welcomed back to the village and showered with love.

Unexpectedly, Mani died on her first birthday, and a new type of plant sprouted on her grave. Although hesitant at first, the villagers eventually pulled up the root, split it open, and found the insides were the same color as Mani’s skin. They peeled and cooked the plant (which they found delicious) and named it mandioca in the child’s honor. 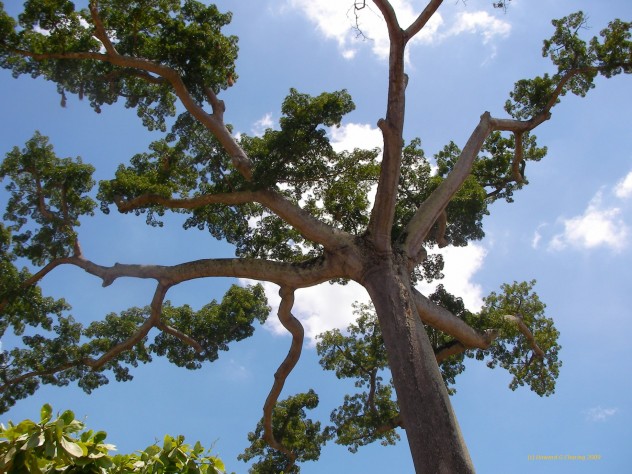 There are several types of lupuna trees in the Amazon, and the myths about them differ greatly. The trees are beautiful, massive, and said to possess magical properties. They are considered protectors of the jungle and will curse anyone who offends them.

If you venture into its territory, the “sorcerer tree” may punish you by causing your stomach to swell until you finally die from ruptured intestines. There are even tales of folks becoming ill after urinating too close to the tree’s roots. Still, some are able to harness the tree’s magic for their personal gain. For example, they can cause an enemy to suffer by leaving his clothes or belongings at the base of the tree, or they can harvest the tree’s sap to use as a poison. 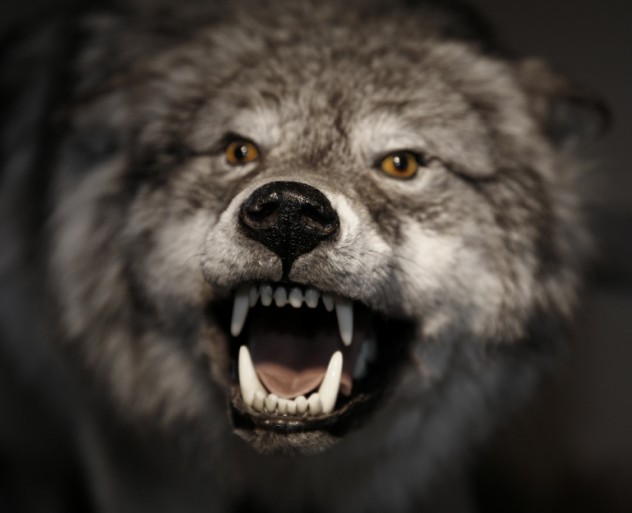 El lobizon is a werewolf-like creature with many names, including luison, luiso, and lobison. Stories of this beast are present throughout all of Central and South America. Most commonly, the lobizon is described as half-man and half-wolf, with red eyes and razor-sharp teeth. He’s not a picky eater and will feed on both the dead and the living.

Unlike European and North American werewolf myths, one does not become a lobizon by being bitten. Instead, the beastly fate is bestowed upon anyone who is the seventh consecutive son in his family. The lobizon gene usually manifests around the seventh son’s 13th birthday, when he will uncontrollably transform into the creature. 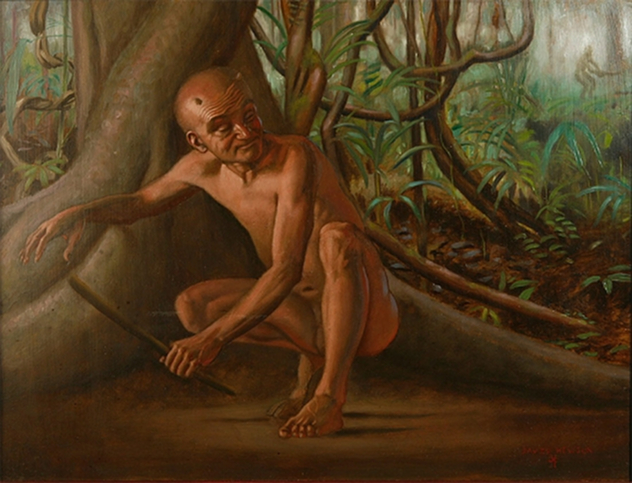 El Chullachaqui is yet another guardian of the jungle. He’s a dwarf-like farmer who spends his free time toying with humans. He often takes the form of a loved one and lures people deep into the jungle—until they are lost forever.

While he could pop up anywhere, it’s advised to avoid clearings, which is where he makes his farms. Chullachaqui has a peg leg (or goat hoof, depending on the legend), so you can easily note his tracks: a tiny left foot alongside a round hole from his wooden leg. 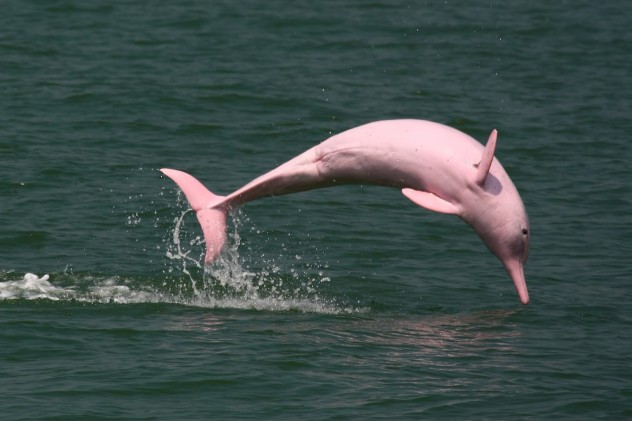 Pink river dolphins are found only in the Amazon, and considering their unusual appearance and intelligence, it’s no wonder there’s a whole slew of fables associated with them.

One such legend tells of Bufeo Colorado, a pink dolphin who shape-shifts into an attractive fisherman. He uses his charm to lure girls away and convince them to have sex with him. If he succeeds, the girl becomes pregnant and gives birth to a pink dolphin.

Apparently, Bufeo is relentless and shows up night after night—until he gets his way or is exposed. The only way to break his power is to fool him into running out the doorway of a high, stilted house, which will cause him to fall to the ground and transform back into a dolphin. At least that solution isn’t ridiculously specific. 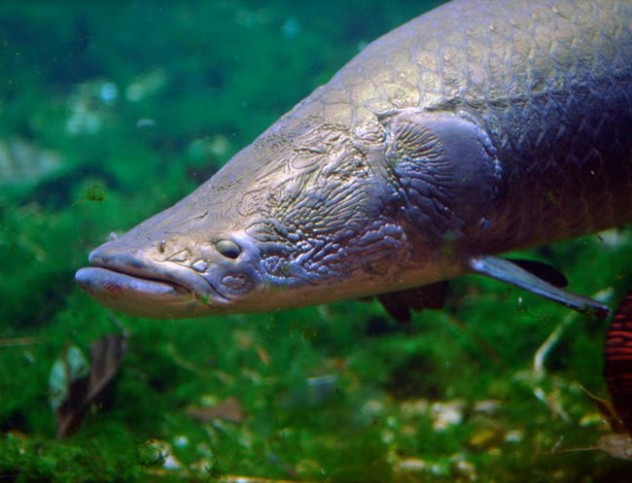 The pirarucu is an enormous freshwater fish that can grow three meters (10 ft) long and weigh over 485 pounds. It has armor-like scales, and South Americans consider its hefty, boneless fish steaks a delicacy. But there’s more to this fish than its collectable scales and prized meat. Natives believe the fish was once a human warrior from the Uaias tribe of the southwestern Amazon.

According to myth, Pirarucu was a brave—yet heartless—young warrior who was vain and overly proud of his position as the chief’s son. He would criticize the gods, and when his father was away, he would execute villagers without reason.

Tupa (the “god of gods”) became fed up with Pirarucu’s behavior and ordered the goddess of torrents to unleash a furious rainstorm on him. Pirarucu was fishing when he saw the storm coming his way but merely laughed it off. While the other villagers ran in fright, a bolt of lightning struck Pirarucu and threw him into the Tocantins River, where he was transformed into the intimidating fish. 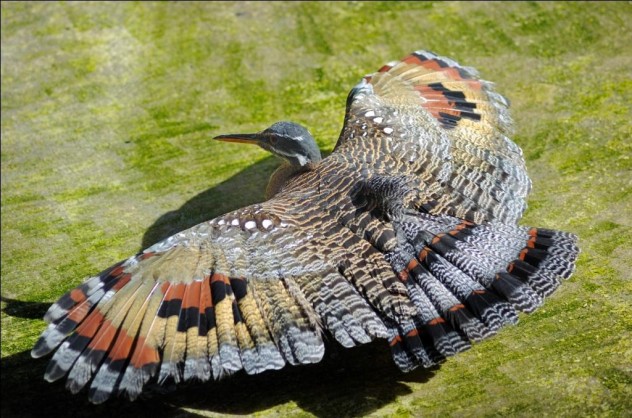 The sunbittern is a long-legged bird that lives on riverbanks in the area between Guatemala and northern Brazil. Amazonians refer to the bird as la tanrrilla and use its bones to cast love spells.

To harness the power of la tanrrilla, you’d have to kill it and bury it long enough for the flesh to rot away. Once enough time had passed, you’d dig up the bird and retrieve its hollow right leg. Then you’d use it like a spyglass and secretly look at the person you desire through the bone. After this, you’d need to go home and hide, making sure no one sees you and you don’t see anyone else for 12 hours. If all is done correctly, the spell is cast and you will win your love’s affection.

Alternatively, some say you can look through the bird’s left leg (using your right eye) to seek revenge on someone you dislike. The same process is followed, but after it’s finished, the person you peeped at will become unlucky in love. 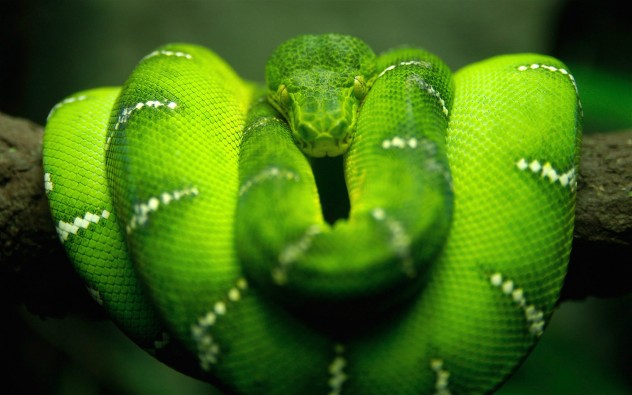 La Sachamama is the spirit mother of the jungle. She has the body of a giant boa constrictor with a massive shell. She has grown so large that she can no longer move freely about the jungle and stays in a single spot, allowing vegetation to grow over her body and serve as camouflage. If unsuspecting passersby (human or animal) get too close, the Sachamama will devour them whole. 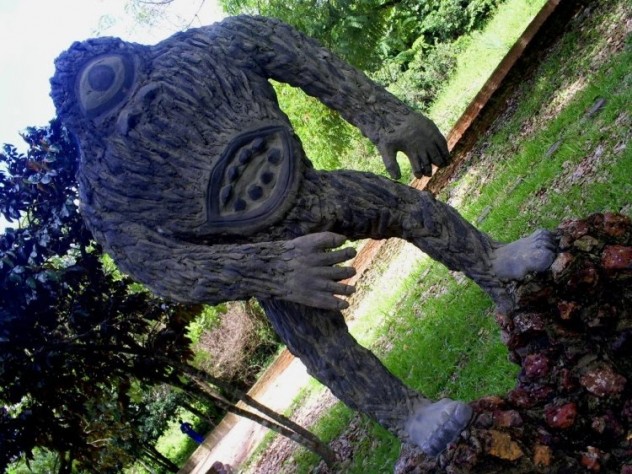 It seems anywhere there’s a forest, there are also tales of a large, bipedal animal lurking around. In North America, it’s Sasquatch, and in the Himalayas, it’s called the Yeti. But in the Amazon, it’s known as Mapinguari.

There are other differences between the Mapinguari and similar big-footed creatures. For one, it’s a heck of a lot scarier: It aggressively pursues human hunters—instead of running and hiding. Furthermore, descriptions of him are quite bizarre, including backward armadillo feet, a single eye, and a gaping mouth in his stomach. While there’s some disagreement about his appearance, all agree that he’s tall, smells like death and garlic, and has thick fur over his impenetrable skin.