Almost every culture or religion in the world describes the existence of some sort of underworld or hell. These descriptions are often unusual in the way sinners are dealt with and even how sinning is defined. While each is unique in its own way, there are elements that are strikingly common across many cultures and religions. 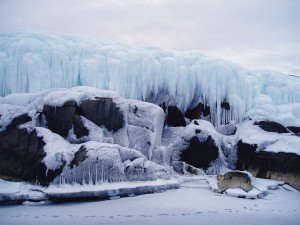 Niflheim is a rather bizarre form of hell found in Norse and Germanic cultures. Rather than being a fiery pit, it’s a freezing landscape, ruled by Hel and located next to the Shore of Corpses, where Nidhogg resides. Nidhogg is, of course, a giant snake that feeds on the dead.

Of the nine worlds in Norse mythology, Niflheim is said to be the deepest and darkest of them all, and the myths claim that the Earth was created when the icy Niflheim and fiery world of Muspelheim combined. The realm is home to the wicked and also serves as an anchor for the Yggdrasill—the World Tree that holds up the universe. Hel became the mistress of the dead after being banished from Asgard, as she was the daughter of Loki. The souls brought to Niflheim by Hel’s messenger Hermodr are kept in constant pain. 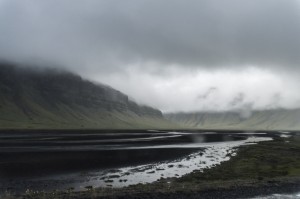 The pre-Christian Finnish believed that the souls of the dead arrived on the shores of the river Tuoni, and were brought into Tuonela by the maid of Death, Tytti. Unlike most of the other underworlds on this list, Tuonela was pretty much a gloomier continuation of life on Earth. Those that found themselves going to Tuonela had to bring items to survive with. It even allowed visitors who wished to come and see their deceased relatives, though the journey was dangerous and often deadly. Particularly dangerous was the river Tuoni itself, which was filled with poisonous snakes. No real punishments were carried out in Tuonela, unless you consider eternally living a life just as mundane as reality a punishment.

8The House of Lies (Zoroastrianism) 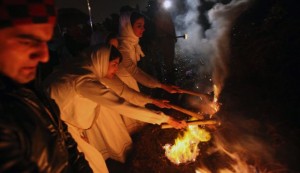 According to the Zoroastrian religion, the first thing the soul encounters after death is the Chinavat Bridge, which separates the worlds of the living and dead. The bridge is thinner than a hair, yet sharper than a blade, and is guarded by two four-eyed dogs. Souls are then judged based their deeds in life. If the bad deeds outweigh the good the bridge turns on its side, dumping the soul into the demon-filled pit below. Alternate descriptions talk of the demon Vizaresh emerging from the pit and dragging the wicked soul into the House of Lies—the Zoroastrian version of hell.

The House of Lies itself is described as a place of disgusting filth, where people are served spoiled food and continuously tortured for their deeds. The demons of the House of Lies number in the hundreds, with each representing a specific sin. For example, Apaosha is the demon of drought and thirst, while Zairika is the demon that makes poisons. Descriptions of the House of Lies vary depending on the translation of ancient Zoroastrian texts, but the elements described above are commonplace to all descriptions. 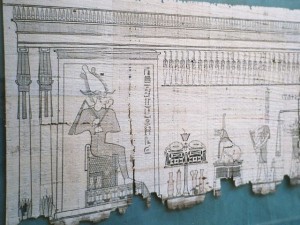 The Ancient Egyptian Coffin Texts describe a version of the afterlife known as Duat, ruled over by Osiris, the god of the dead. The Book of Two Ways contains a map depicting the journey one must take through Duat. The book describes a landscape similar to Earth, but also containing mystical elements like a lake of fire and iron walls. When approaching Duat, souls had to pass through gates guarded by half-animal, half-human creatures with evocative names like “Blood-Drinker Who Comes From The Slaughterhouse” or “One Who Eats The Excrement Of His Hindquarters.” After passing through the gates, the deceased person’s heart was weighed against a feather. If the heart was heavier than the feather, it would be eaten by the demon Ammut. The souls of the wicked were then condemned to face justice in Duat. Many were forced to walk upside down or receive punishments from serpents and devouring demons. 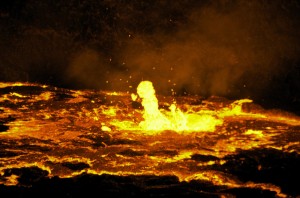 The name “Gehenna” originally referred to a valley outside of Jerusalem where followers of the god Moloch sacrificed children in great fires. It later came to refer to the Hebrew interpretation of hell, where the wicked were sent to pay for their sins. Gehenna resembles the Christian version of hell more closely than most entries on this list. It’s described as a deep and desolate place where flames continuously burn and rain from the sky. The heat given off by the flames is 60 times hotter than any flames found on Earth. Noxious sulfuric gasses hang in the air and rivers of molten metal flow freely. 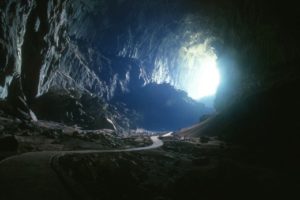 Found in Greek and Roman mythology, Tartaros is described as a deep black dungeon full of torture and suffering. While most believe Hades to be hell, it is actually just a place for all the dead, with Tartaros being even deeper than Hades and reserved only for sinners. People are sent to Tartaros after Rhadamanthus judges them and decides their punishment.

In Roman mythology, Tartaros is surrounded by three walls and the fiery river Phlegethon. It is guarded by a nine-headed monster known as the hydra, along with Tisiphone, who watches over everything while constantly whipping people from his post. At the bottom of Tartaros are the Titans, enemies of the gods who were defeated and imprisoned.

Similarly, Greek mythology described Tartaros as a place that began as a prison for those that would endanger the gods, but later began functioning as a hell for all sinners. Wicked souls are punished in ways appropriate to their sins. For example, Tantalus was banished to Tartaros after cutting up his son and serving him to the gods as food. He was punished to suffer hunger and thirst, while standing in a pool of water he could not drink, below fruits that he could not eat. 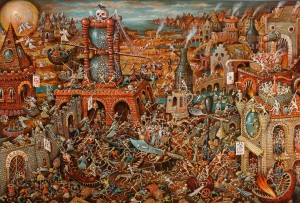 Many popular conceptions of the Christian hell can be traced back to the Renaissance poet Dante Alighieri. His Divine Comedy describes allegorical journeys through heaven, purgatory, and hell. Inferno begins with a sub-level where people are doomed to reside for doing nothing in life. They are punished in this realm by having to eternally chase after their self-interest while being followed by a swarm of insects and infected by maggots. A river known as Acheron surrounds the nine circles of hell itself. The first circle is a fairly pleasant place called Limbo, which is home to non-Christian souls who committed no sins.

The remaining levels correspond to each of the seven deadly sins. In the second circle, the lustful are punished by being blown around aimlessly by strong winds. The third circle houses gluttons and addicts, who are forced to remain in a disgusting slime. The fourth level contains two groups of sinners, those who hoarded money and those who wasted it, who must endlessly battle each other. Those who commit sins in anger remain in the fifth circle, where they fight each other in the river Styx, unable to ever feel happiness again. In the sixth level, heretics are locked in flaming tombs.

The seventh circle is divided into sections for violence against others, suicides, and violence against nature or God. The eighth circle is reserved for frauds and split into sub-levels where sinners have their heads twisted backwards and are whipped by demons, submerged in feces, burned on the soles of their feet, placed in a boiling lake, bitten by snakes, dismembered, and diseased. The last of the circles is home to those who committed treachery and are doomed to a specific icy punishment. In the center of hell, Satan himself is found chewing on Cassius, Brutus, and Judas. 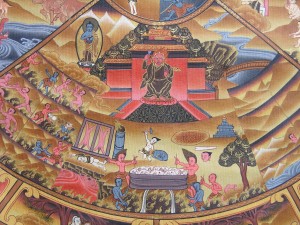 Naraka or Niraya is the concept of hell for some branches of Hinduism, Sikhism, Jainism, and Buddhism. While the exact descriptions of Naraka differ between religions, it is a place of punishment based on a soul’s karma. Naraka is only a temporary destination and once the sinners have paid the price for their karma, they are reborn.

It is thought to be divided into several levels depending on the sins committed during life. The number of levels in Naraka varies from four to over 1,000 based on different descriptions. For example, Maharaurava is a place for those who gain at the expense of others. In Maharaurava, the sinner has his or her flesh eaten by a serpent demon known as Ruru. The realm Kumbhipaka is home to sinners that cook birds and animals. They are punished by being boiled in hot oil for the same amount of time as there were hairs on the animals they killed.

In the Hindu and Jain culture, Naraka is thought to be ruled by Yama Loka, the God of Justice. Once a person passes away, their actions throughout life are audited by Loka’s assistant and they are either sent to Svarga (heaven) or Naraka. Unlike Hinduism or Jainism, Buddhists believe that all souls are sent to Naraka to be cleansed of their sins, and no ruler exists to audit people’s actions in life. Regardless of cultural variation, it is believed that souls can remain in Naraka for billions of years until their karma has been restored and their souls may be reborn. 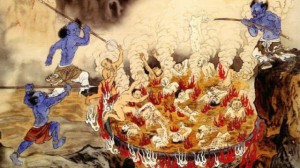 Diyu is a version of hell in traditional Chinese culture, and vaguely resembles Naraka. It consists of several levels, with the exact number differing from four to 18. Each level is watched over by a judge and punishments are carried out on sinners based on their actions during life. Chinese culture believes Yama Loki of Naraka was asked to watch over Diyu, where he eventually condensed the 96,816 hells into 10 sections that sinners would pass through before reincarnation. During the Tang Dynasty, this description changed to 134 hells, with 18 levels of pain and torture. 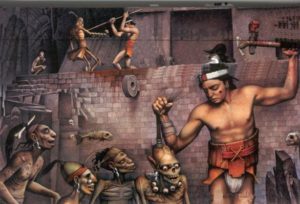 Xibalba is the Mayan version of hell and is thought to actually exist as a physical place in a cave system near Belize. It was said to be a place of pain, where the lords of the afterlife inflicted various odd forms of torture on unlucky souls. The lords were said to work together to inflict the punishments on Xibalba visitors. Ahalpuh and Ahalgana caused pus to gush from people’s bodies. Chamiabac and Chamiaholom caused the bodies of the dead to decay into skeletons. Ahalmez and Ahaltocob worked much like Mayhem does in those Allstate commercials by causing people deadly disasters in their homes. Xic and Patan brought death to people on the road, either by causing them to vomit blood, or squeezing them until blood filled their throats.

Souls were forced to complete a difficult and humiliating path just to reach Xibalba. Their journey began by crossing several rivers filled with blood, scorpions, and pus. Then the path split into four roads designed to entertain the lords by humiliating and confusing the travelers. Visitors were further tested by being sent into one of six deadly houses. The Dark House is pretty self-explanatory, as is the Jaguar House, Razor House, Hot House, and Bat House. The last house, known as the Rattling or Cold House, is filled with hail and freezing temperatures.

Shelby is an undergraduate at Arizona State University studying psychology and medicinal biochemistry. She is constantly fascinated by the mysteries of the world around her. She hopes to go on to medical school once she graduates to be able to search for and solve these mysteries.