We in the West have been at war for over a decade now, and our commitment to bombing faraway countries has resulted in a lot of our soldiers coming back with brutal memories of combat. Now, in an ideal society, those who risked their lives for their country would be handsomely rewarded—but our society is far from ideal. In fact, if we didn’t know better, we’d swear our governments were doing everything in their power to make life miserable for veterans. 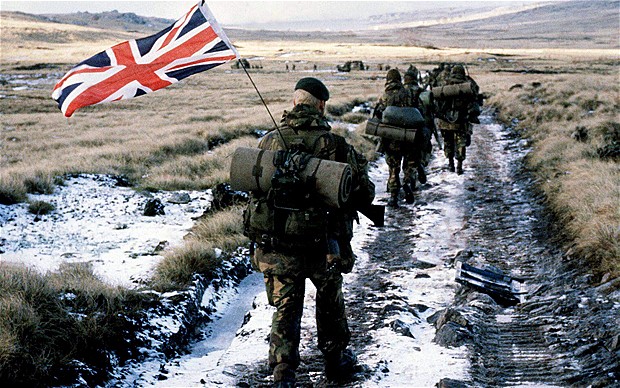 You probably haven’t heard of Lariam. Basically, it’s an anti-malaria drug that’s been linked to incidences of psychosis and is suspected to have been responsible for several murders and suicides. It’s banned in the US, but the UK military has been feeding it to their soldiers for decades.

According to The Independent newspaper, around 2,500 British soldiers are prescribed Lariam a year, despite it being implicated in the massacre of 16 Afghan civilians in 2012. Known side effects of the drug range from hallucinations to liver damage to psychotic states that recur for years after. It’s a horrifically toxic mess of a drug that’s been under suspicion for over 11 years, and the UK military flatly refuses to ban it or even offer an alternative. This means that yet more soldiers will have to suffer unnecessary mental torture until the idiots in charge bring their medical knowledge up to date. 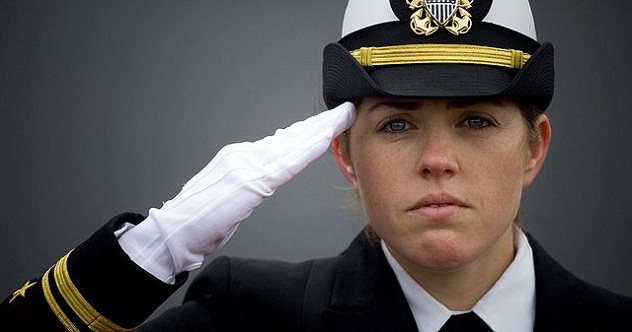 The homeless vet is practically a cliche: The guy who saw dreadful things at war and now lives on the streets, troubled by his violent past. Like most cliches, it has a firm basis in real life, although there’s one detail we almost always get wrong: the homeless veteran’s gender.

In 2012, there were over 55,000 female veterans living on the streets. Right now, they represent the fastest-growing homeless population in America. At least 93 percent of them have suffered some sort of trauma . . . and we’re doing almost nothing to help them. The problem is that so very few veterans shelters have space for women with children, or even women at all. The sheer amount of transitional housing available to male veterans dwarfs that available to women, and this imbalance has consequences. Right now, we’re watching a crisis unfold, and once again we’re doing almost nothing to stop it. The sad fact is, if you’re a female soldier, you’re simply more likely to wind up on the streets than your male counterparts. 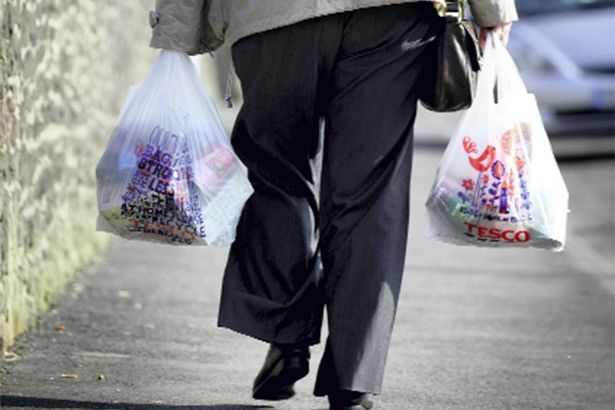 Food poverty is exactly what is sounds like—a shameful state of affairs where sufferers simply can’t afford to eat. That’s why we have things like food stamps, so people like our returning combat veterans don’t go hungry. Unfortunately, thanks to government cuts, that might all be about to change.

Right now, there are around 900,000 veterans claiming food stamps, with a combined value of $100 million. This means nearly 1 million soldiers are struggling to feed their families, a statistic that’s disgraceful in itself. When the upcoming cuts begin to bite, it’s estimated that 170,000 of those struggling soldiers will lose access to food stamps, meaning poverty, hunger, and a reduced ability to provide for their kids. In effect, we’re throwing these guys to the wolves in the name of saving money—savings we’re then passing onto more “deserving” people, like the CEOs of multi-billion-dollar oil companies. 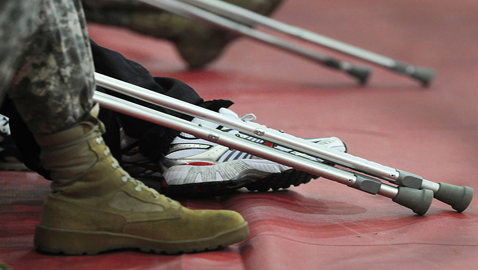 While we’re on the subject of benefits, do you believe severely disabled combat veterans deserve to be financially protected when they return from duty? Unless you’ve got a great big rotting hole where your soul used to be, you’re almost certainly shouting “Yes!” Unless, that is, you work for the UK government.

Right now, Britain is overhauling its welfare system. Without getting too complicated, the plan is to encourage disabled people into work by removing their benefits—even when they’ve previously been blown up by a Taliban bomb. Meet Mark Dryden: A few years ago, an IED blew off one of his arms, severely damaged the other, and left him with crippling PTSD. The UK government have now refused to pay him any disability benefit despite him being, you know, disabled. Same story with Sgt. Jean Reno, who has brain injuries, no short-term memory, double vision, is in constant pain, and suffers from chronic depression. These guys sacrificed their health when the government asked them to, and in return the government wants nothing more to do with them. 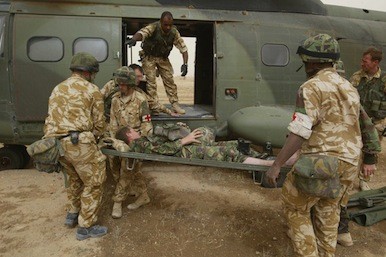 Like it or not, human beings aren’t machines. If we witness something deeply traumatic, say, all of our closest friends being murdered, it tends to leave a sort of psychic scar. In combat veterans, this frequently manifests itself as PTSD, a condition that has been on the books since 1980. Yet despite being completely aware of its existence, the army not only routinely ignores signs of it, they also punish the sufferers.

The trouble is, PTSD often leads to violence, erratic behavior, and disobedience. As a result, traumatized veterans are often imprisoned, dishonorably discharged, and denied access to benefits. Take the case of Kash Alvaro. After suffering a brain injury in a roadside blast, he was returned to Fort Carson, where his trauma prevented him from attending formation and triggered arguments with superiors. Rather than treat him, his battalion discharged him and stripped him of his veteran’s benefits, in effect ruining his life. And Alvaro’s case isn’t just a one-off. As various wars wind down, more and more veterans are being dishonorably discharged, with as many as 500,000 suspected to be suffering from PTSD. In short, we’re sitting on a mental health time bomb, and it’s only a matter of time before it blows up in our stupid faces. 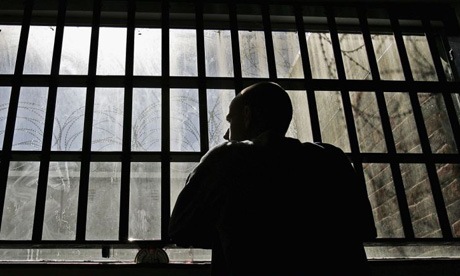 We mentioned earlier how PTSD drives some vets into a discharge and poverty, but mental illness doesn’t vanish when you get kicked out of the force. If anything, it gets worse. And the effect of that is to land plenty of traumatized ex-soldiers in prison.

According to Business Insider, there are currently around 1 million vets in jail or awaiting trial in the US. Taken as a group, they make up around 10 percent of the prison population, both in the US and in the UK. Most of them are suffering from some form of trauma, which often goes as untreated in prison as it did outside. Essentially, we’re sending our soldiers off to witness things that would affect any sane human being, then kicking them out of the military and straight into prison when they show signs of that effect. Already this is being recognized as a problem, with the first special veterans court finally being opened last year. But this is just attempting to mask the symptoms: Until the root problem of PTSD in the armed services is tackled, the number of imprisoned vets will keep on rising. 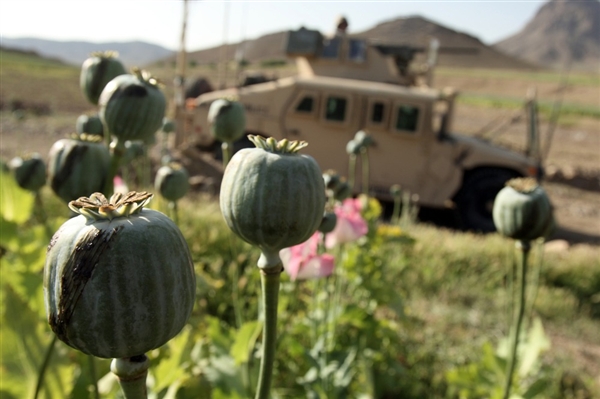 If you want some shocking statistics, you don’t need to look much further than the government’s own report into substance abuse among returning veterans. In 2011, it was found that prescription drug abuse rates doubled between 2002 and 2005, before tripling between 2005 and 2008. While this is bad enough, it has nothing on the statistics for alcohol abuse, specifically, the rate of referral.

See, vets are routinely checked three or four months after returning from active duty. This often includes screening for substance abuse problems. In one study published a couple of years ago, it was found that around 27 percent of those screened were showing signs of alcohol dependency. With that in mind, want to guess how often soldiers are referred for alcohol treatment? The answer is hardly ever. There’s a huge chasm between what we claim to do for our veterans and what we’re actually willing to do, and substance abuse is one of those things that simply gets swept under the rug, even as it continues to destroy the lives of nearly one-third of our troops. 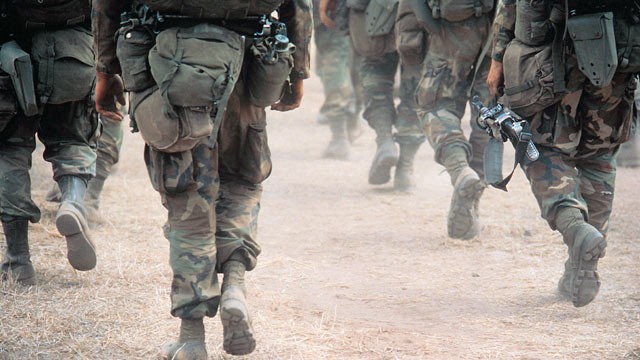 Suicide is a shockingly large problem in the military. Last year, 349 American services personnel took their own lives, 54 more than died in combat. But this just includes those on active duty. If you widen the net to include veterans, then the number who killed themselves in 2012 is a staggering 6,500. According to The Guardian, that equals one suicide every 80 minutes—and rather than treating the problem, the military is seemingly doing everything in its power to make things worse.

In 2010, Pvt. Lazzaric Caldwell was convicted of “self-injury,” a charge meant to cover soldiers who willingly injure themselves to escape battle. Caldwell’s crime? After suffering PTSD and learning he was in trouble for marijuana possession, he took to his barracks and slit his wrists. For attempting suicide, he was given 180 days. Ultimately, the Army Court of Appeal overturned his sentence, but the law remains on the books, meaning a commanding officer can still punish any of his men that attempts suicide.

This is just about the dumbest thing anyone can do. The stigma around mental health is already so bad that only 16 percent of veterans who ultimately committed suicide had set foot in a clinic prior to taking their lives. That’s a disturbingly low statistic, and if the military continues to criminalize suicide, it’s only gonna get worse.

In 2012, a Pentagon survey revealed that 26,000 service members had been sexually assaulted the previous year. According to CNN, that’s 7,000 more than in 2011. Of these victims, 47 percent were female, the rest male. In short, it’s a problem that cuts across all levels of the services—and the reaction to this problem has been nothing short of horrific.

Earlier this year, a Navy woman took her three attackers to court, only to be interrogated, humiliated, and subjected to character attacks by the defense team. Thanks to a slimy piece of military law known as Article 32, assault victims can be smeared as sluts before a judge and otherwise bullied into not taking action. And this is having an effect: Of those 26,000 sexual assaults last year, only 302 resulted in successful prosecutions. All too often, military officials label female victims as “crazy” and force them out on trumped-up mental disorder charges.

Not that male victims fare any better. Right now there is
only one dedicated male veteran’s sexual assault center in the whole of the US—still a step up from 10 years ago, when there were none. Even worse, many fear to seek out help because the army routinely strips them of their security clearance following an allegation; a move that’s so unhelpful you’d be forgiven for thinking they were taking the rapists’ side. To sum up, this is a major, major problem. And until we do something about it, and everything else on this list, we’re going to continue betraying those same people who risked their lives flying away to some foreign country purely to protect us. Some deal they got.