Every day, our atmosphere is bombarded with alien rocks. They travel billions of miles across the soulless chasm of space on a collision course with Earth, and in a brief, glorious instant, they’re gone, burned to oblivion in the upper reaches of the atmosphere. But every now and then, a meteorite arrives with just the right mixture of size and determination to make landfall. And if it wasn’t a rock, it would understand that this means exciting times for the people below. 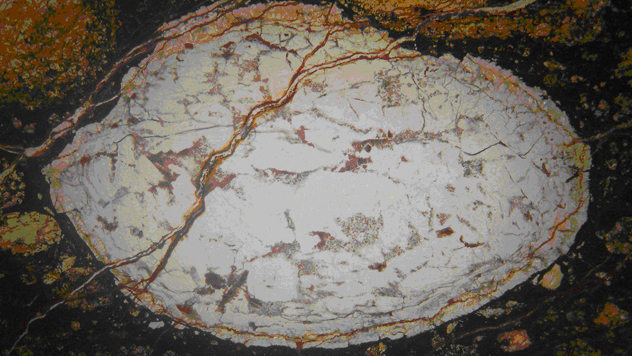 The Krotite meteorite was discovered in Morocco in 1934, lending it the official name of “NWA 1934.” The small rock had few distinguishing features, but there was one problem: Nobody could figure out what it was made of. It wasn’t until 2010 that researchers came to the conclusion that the meteorite contained a completely new mineral that had never been seen before.

The mineral was named “krotite” after Alexander Krot, the cosmochemist who worked on figuring out the chemical composition of the rock. Interestingly enough, krotite is extremely similar to a few different forms of man-made concrete, just further proof that anything we can make, nature’s probably already figured out. And in this case, nature figured it out about 4.6 billion years ago—krotite is believed to be one of the oldest minerals, having formed back when the Solar System was still just thinking about coming together.

9A Nuke-Like Blast From An Alien Planet 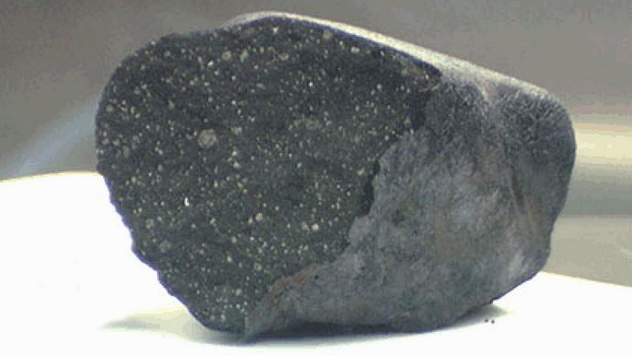 Most meteorites break off a larger, parent meteoroid well before entering our atmosphere. The Tagish Lake Meteoroid, however, plunged headlong into the stratosphere before shattering with more energy than the bomb that took out Hiroshima. The meteoroid itself was estimated to be 4 meters (13 ft) in diameter with a weight of 56 metric tons, large enough to wreak havoc in a large area if it had landed intact.

As it was, about 93 percent of the meteoroid was ablated, or vaporized, before it erupted into a fireball. It exploded about 40 kilometers (25 mi) above the Earth’s surface and sent thousands of meteorites clattering across the frozen surface of Tagish Lake in Canada. When NASA arrived to study the pieces, they had to cut blocks of ice out of the lake because the fragments were too deeply embedded to remove. The entire lake had been perforated. After studying the meteorites, it was discovered that they had come from 773 Irmintraud, a minor planet (or large asteroid) that floats between Jupiter and Mars. 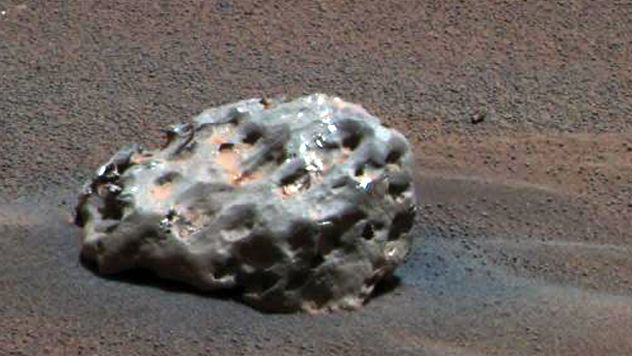 Until 2005, all the meteorites ever studied had been found on Earth (not counting two on the Moon). We hadn’t really been anywhere else. But a year after the Opportunity rover landed on Mars in 2004, it discovered the first meteorite to be found on another planet. The discovery was an accident; the rover was looking for the heat shield that had been ejected during its landing. Sitting next to the shield was large, pocked ball of iron—the Heat Shield Rock.

Since the rover wasn’t equipped to drill into something made of almost pure iron, we haven’t been able to study it much. But one thing is certain—due to the way it survived its fall intact, it must have been traveling fairly slowly. To do that, Mars must have had a much thicker atmosphere when it fell, an atmosphere that contained water. This brings us we closer to figuring out the timeline of the changes in Mars’s atmosphere, something we’ve never really been able to do. And all it took was a chunk of rock. 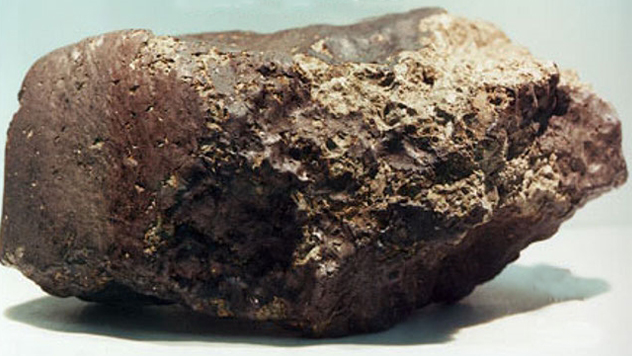 Most meteorites are very old. Solid chunks of matter were typically formed a few billion years ago, and the ones that didn’t coalesce into a planet became nomads, drifting aimlessly through space. For example, the Allan Hills 84001 meteorite (or ALH84001) is believed to be over 4 billion years old —a relic from the formation of our Solar System.

But it’s not famous for being one of the oldest things in our neighborhood. Discovered in Antarctica in 1984, ALH84001 was studied extensively for eight years before researchers made a shocking announcement: It was covered with carbonate globules, a sign that it could be a collection of bacteria fossils. That’s particularly strange, considering it came from Mars. It’s believed that about 15 million years ago, the impact from another meteorite knocked this chunk into space, along with a colony of Martian bacteria. It floated around in space for a while before connecting with our planet roughly 13,000 years ago.

The claim that the rock was covered in alien bacteria was later bashed to bits by the scientific community. But in 2011, it was confirmed that even if bacteria never lived on the rock, it was definitely formed in an environment with liquid water. 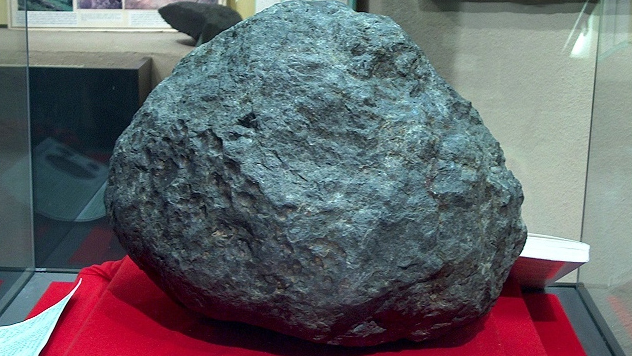 The Ensisheim meteorite is the oldest preserved meteorite in the world. It landed in 1492 in Ensisheim, a small village in eastern France. The rock itself isn’t really anything spectacular. It’s what’s known as an ordinary chondrite which, as you might guess from the name, isn’t the rarest thing that’s ever fallen from the sky. Ordinary chondrites make up nearly 90 percent of all meteorite finds. 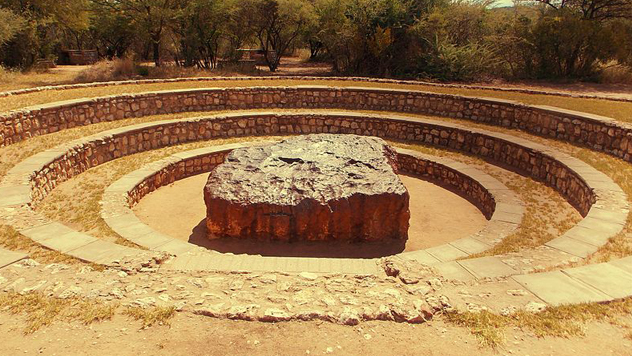 With a weight of more than 60 tons, the Hoba meteorite is the largest known meteorite in the world. As a matter of fact, it’s also the largest single piece of iron that we know about. Because it’s so massive, it’s never been moved—it’s still sitting in a little farm near Grootfontein, Namibia.

The Hoba meteorite was discovered by pure luck. A Namibian farmer, Jacobus Brits, was whipping his ox through a field on his property when the plow came to a screeching halt. Upon investigating, he found a large, square rock embedded in the dirt. It wasn’t until later that he realized it was a meteorite. Because of its shape (flat on all sides), it’s believed that the meteorite skipped across the surface of the atmosphere a few times, like a pebble skipping across a pond, before plunging through. It probably made landfall around 80,000 years ago, crashing through the atmospheric layers at speeds of 300 meters per second (about 1,000 ft/s). It’s now a national monument. 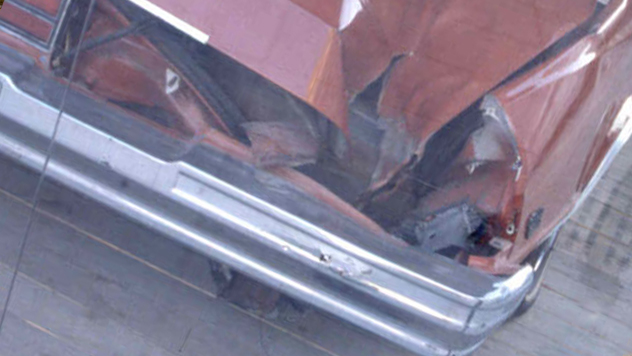 In 1992, thousands of Pennsylvania residents watched a flaming green object hurtle through the sky and come to a thundering halt in the trunk of a Chevy Malibu. Aside from the meteorite which fizzled through Russia’s skies in 2013, the Peekskill meteorite, as it was later named, is the most recorded meteorite in history. As it crossed over a high school football game, dozens of parents forgot their children and turned their video cameras to the heavens to get it on film. Sixteen videos later surfaced showing the meteorite’s descent.

The meteorite, which weighed 12 kilograms (26 lbs), was a rare type known as an H6 monomict breccia—it was formed when two massive asteroids collided in space, creating an enormous amount of pressure and heat. Before it hit the atmosphere, it was rocketing through space at 14,000 meters (8.8 mi) per second—by the time it landed 40 seconds later, it had slowed down to only 200 kilometers (126 mi) per hour.

But what about the car? Well, the owner was able to purchase a new one after selling the meteorite for the tidy sum of $69,000.

3Diamonds And The Seeds Of Life 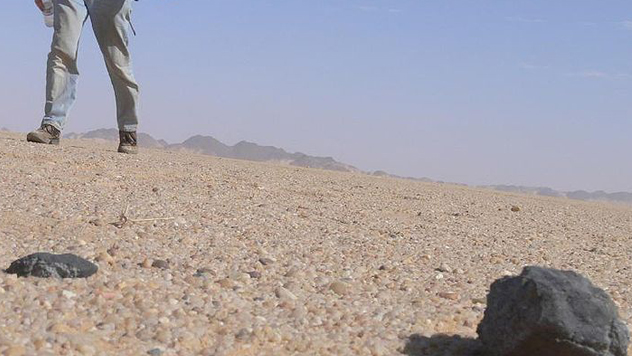 Right now, 28 high-powered telescopes orbit the Earth. Dozens of land-based observatories are scattered across the globe, and untold millions of amateur telescopes point towards the stars. The goal of all of these is simple: to see things in space. But until 2008, we had never caught a meteorite until it was already burning a trail through the atmosphere, completely visible with the naked eye. 2008 TC3 was the first meteorite that was tracked to Earth from outer space, and despite all our technology, the feat boiled down to nothing more than a hobbyist who happened to be looking in the right place at the right time.

Richard A. Kowalski spotted the asteroid a full 19 hours before it reached the planet. NASA quickly jumped in and, with an army of amateur astronomers at their backs, calculated the exact landing position of the rock. Sure enough, the asteroid broke up in the atmosphere and showered hundreds of meteorites across the Nubian Desert in Sudan.

But the real surprise came later—far from being a normal rock, 2008 TC3 was filled with nanodiamonds, diamonds with an extremely small crystalline structure which are the hardest material in the known universe. And spread across the surface of the nanodiamonds was another, stickier surprise: amino acids, the building blocks of life. This proves that life can technically form in space, and by all probability, life on Earth started after a similar meteorite impact. 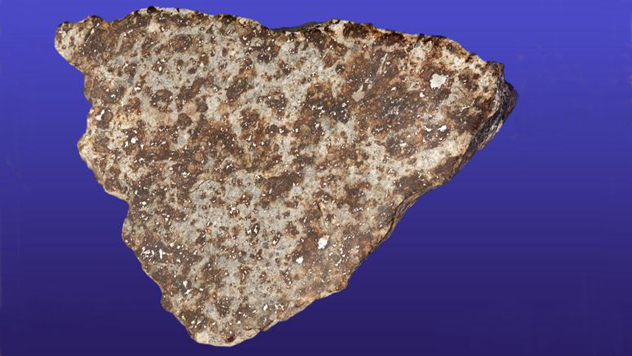 In October 1972, the first meteorite fatality in known history was recorded in the small village of Trujillo, Venezuela. The victim: a dairy cow. Nobody saw the meteorite fall, but the sound was unmistakable—a massive sonic boom that’s caused when a meteor explodes into fragments in the upper atmosphere.

The next morning, the owner of the farm, Argimiro Gonzalez, was woken up by one of his farm hands. The man was babbling about killer rocks, and when Gonzalez investigated he indeed found a bloody rock in one of his fields. Beside the rock was a very dead cow, its shoulders and neck crushed to a pulp like the trunk of a Chevy Malibu. The cow was promptly eaten, and Gonzalez used the murderous mineral as a doorstop for the next several years, until an astronomer came to examine it and declared it to be a fragment of the Valera meteorite that had broken up over Venezuela around that time.

You can actually buy the meteorite now and own the only alien object to claim the life of an Earth creature on our home turf.

1 The (Supposed) Cure For AIDS 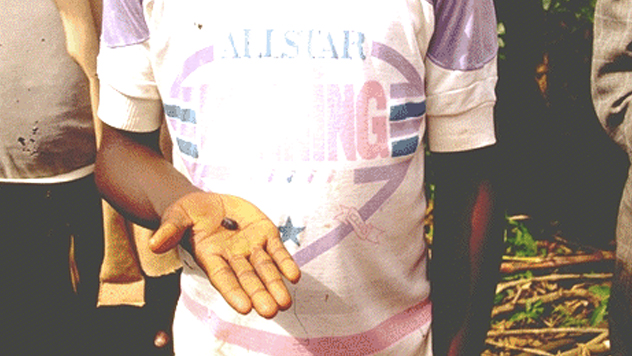 On August 14, 1992, a meteorite shower hit the village of Mbale, Uganda. The meteorite was nothing special, just run-of-the-mill ordinary chondrite, a big, ugly rock that only weighed 1,000 kilograms (2,200 lbs) before routinely shattering into fragments. Boring.

But by the time researchers arrived at the site, there wasn’t much left to study—the local population had already crushed most of the pieces into powder and eaten it. See, Mbale at that time was going through an AIDS epidemic that was sweeping through the populace. Desperate, they took the meteorite as a sign from God, and believed that within its cosmic structure was a cure for the disease with which they were stricken. They were swallowing the powder by the fistful and mixing it with water to form a paste, which they smeared over their skin.

Unfortunately, there was nothing in the meteorite except for some chunks of iron, and AIDS still affects that region of Uganda to this day.