The duck-billed platypus has long enjoyed a role as nature’s jester. We all know this animal is funny-looking, but the bizarre facts of this strange creature’s life go far beyond its appearance. The platypus has some of the strangest attributes, habits, and anatomy of any animal. Clearly, the platypus was a practical joke played on us by God—and He’s still laughing. 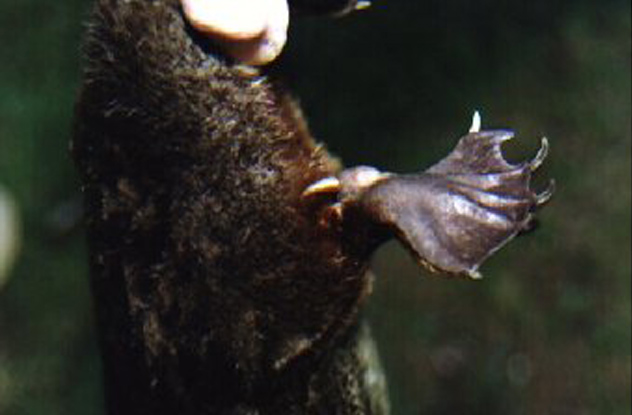 On top of all the other strange things that make up this patchwork creation is a poison spur that the platypus can use for self-defense or aggression. This spur can easily kill small animals, including rival platypuses for mating, but it can also cause incredibly intense pain to fully grown human beings.

Scientific understanding of platypus venom isn’t concrete. We have no evidence that It can kill you, but it can definitely cause intense pain. An Australian man who once found himself on the receiving end of a platypus spur said a bullet would have been more enjoyable. After receiving the sting, he lost all use of his arm. 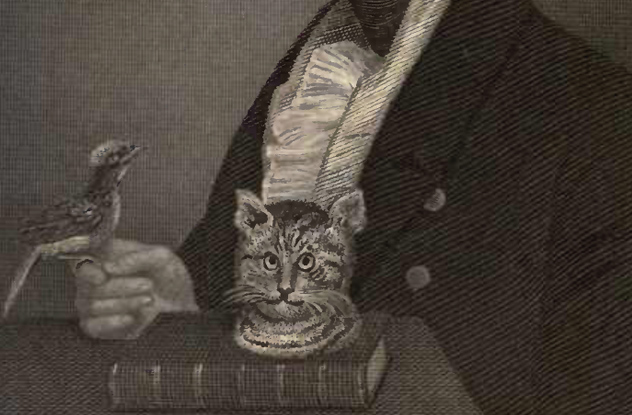 Human beings have been trolling since long before the Internet was a thing and would probably find our pranks lazy at best. You see, back in the day, naturalists liked to play a game where they stitched up different animal parts and tried to see if they could convince people it was a new species.

The duck-billed platypus was discovered at a time when this kind of global trolling was very popular. This caused most people at the time to believe the platypus to be an elaborate hoax. Many people were skeptical even after viewing a live specimen, refusing to believing their eyes. 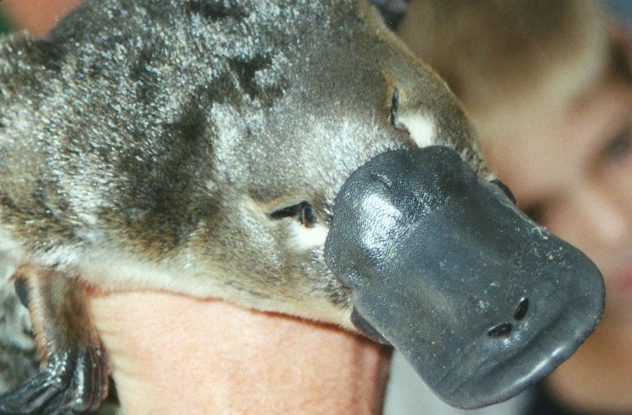 Like many mammals, the platypus hunts for food, but it does things in its own uniquely freaky way. To begin with, these crepuscular little fellas do most of their hunting underwater despite being mammals. However, more strangely, platypus has no use for those common, everyday hunting senses like vision, hearing, and smell.

To seal itself off from water, the platypus shuts off all of those normal senses and finds prey based solely on electrical signals and mechanical waves that it picks up using its bill. This allows the platypus to create a perfect representation of its surroundings to find prey, all from its own watertight cocoon. 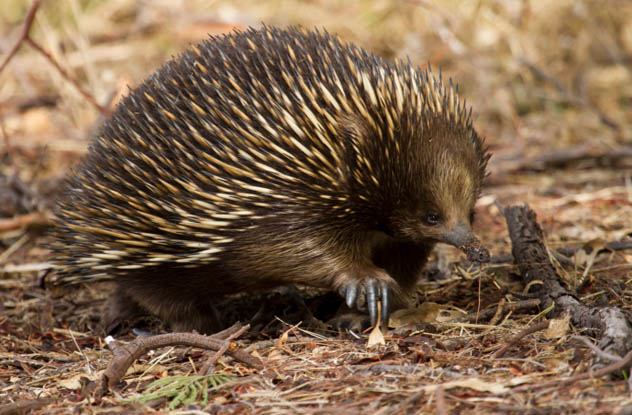 The experts who first spotted the platypus considered it a mystery. Apart from looking like a Frankenstein’s monster patched together from discarded animal parts, it is also one of the few mammals that lay eggs. Humans, cows, and most other mammals give live birth, but this furry little abomination had to buck the trend and pop out its young in oval shells like some kind of rebel.

Other mammals laid eggs long ago, but the only one now left besides the platypus is the echidna. Scientists assigned them the exclusive “monotreme” category just so they’d have some way to classify the latest nightmare to come out of Australia.

Platypus on the Prowl

You’d think that the platypus, being a mammal with legs, would be meant for land. Actually, the animal’s very awkward outside of the water. The platypus has webbed feet, which are great for swimming and certainly increase its diving abilities. However, unfortunately for the platypus. this makes walking on land about half as energy efficient as swimming. The poor thing has to basically walk on its knuckles.

The platypus does have some nails it can extend, and it uses them to dig for food or shelter. In fact, despite hunting underwater, the platypus usually spends the majority of any day holed up nearby in a dry burrow.

The platypus looks a fair bit like a furry beaver with webbed feet, but also has the bill of a duck. It looks like a carnival freak show; it was clearly dealt a difficult hand. But the platypus is always up for improving and making the best of the things. Despite the adults having no teeth whatsoever and often hunting food that requires a fair bit of breaking up, the platypus is doing just fine.

When the platypus stirs up the muck at the bottom of the river to scoop up prey, it will often grab up gravel with it. It then uses this gravel to help break the prey up into smaller chunks. Say what you will about how they look, but the platypus seems to be the first animal to invent dentures. 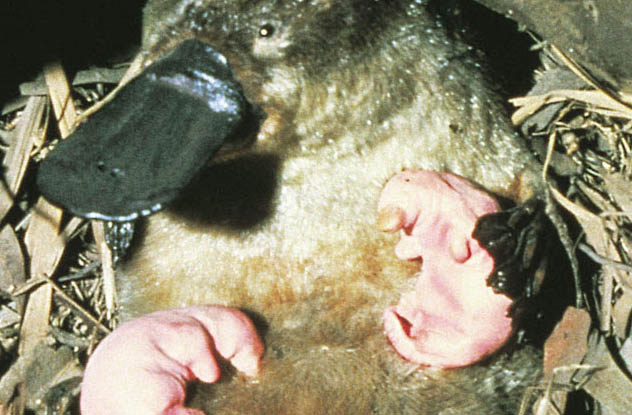 As you know, our favorite little rebel likes to do everything differently from its mammal brethren, and as this extends to feeding its young as well. Like all mammals, the platypus feeds milk to its young. However, the platypus doesn’t actually have teats at all and they aren’t a necessary part of the process for this little freak.

Females produce milk, but their mammary glands don’t protrude as nipples. Instead, the areolae act as “milk patches,” which secrete milk much like skin secretes sweat. The little monsters can then lap up the milk straight from their mother’s skin in some kind of odd, furry ritual offering to their heathen gods. 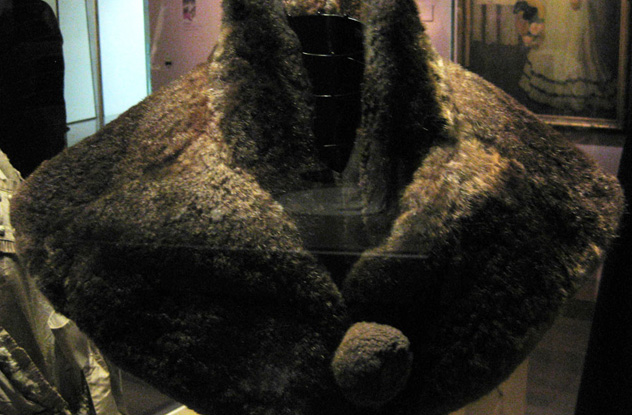 In the early 1900s, when we didn’t even know much about the platypus, people used to hunt them for their fur. The Platypus has a very thick, waterproof coat that proved quite popular in the fur trade. Hunters would stun the poor little beaver-duck hybrids by firing into the water and would then have their dog do the dirty work.

Unfortunately, the poor mutts would sometimes get poisoned by the wily platypuses, but the hunters still found the trade too profitable to abandon. Platypus fur was especially popular in rugs because its thickness actually made it hard to work into clothes.

The Australian government decided to clamp down on the practice, banning platypus hunting to protect it from destruction. As of right now, the species numbers arelooking just fine. 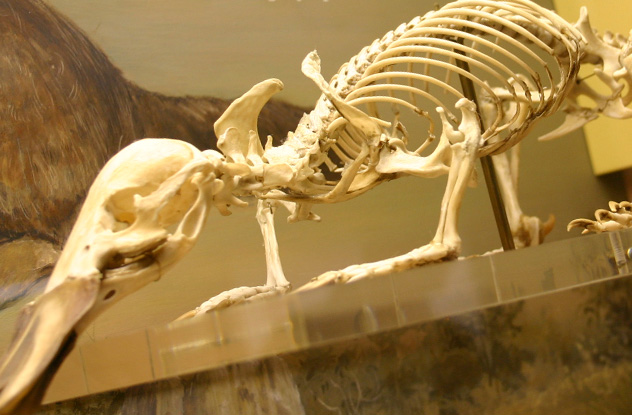 The platypus has been dealing with the short end of the stick from evolution for a very long time and has no stomach for any guff from anyone. And we mean that quite literally, as the platypus has actually evolved out of the need for a stomach.

The stomach breaks down certain foods to aid in digestion, but the platypus just sort of has an intestine and esophagus that connect together. As far as scientists can tell, the platypus is definitely descended from species that had stomachs, but it somehow ended up without one. The best theory is that the diet it has become used to over the years didn’t include foods that required the usual complex digestion so the species simply stopped producing stomachs. 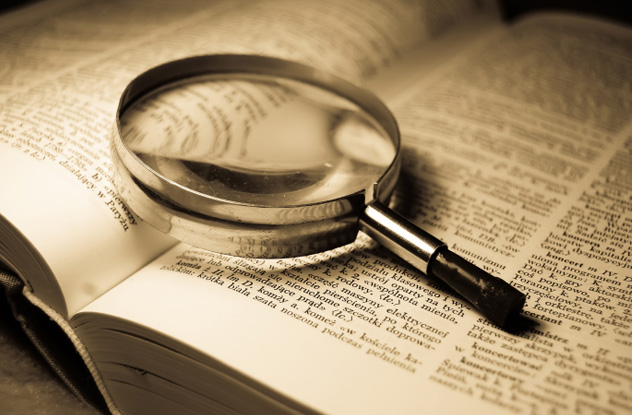 The biggest debate regarding the platypus has nothing at all to do with the creature and everything to do with its name.

Many people disagree on what the plural of “platypus” should be, and it can be very confusing. Some people insist that it is “platypi,” but this is incorrect. According to some sources the name is actually of Greek origin, which would mean that the correct plural would be “platypodes.” However, platypodes is a plural most people are likely unfamiliar with and would only make things more confusing.

“Platypus” or “platypuses” has become the primary correct way to pluralize this abomination in most dictionaries and is usually the best way to be understood. Just remember, if someone smugly corrects you saying it must be “platypi,” you can just as smugly tell them that they are mistaken.