Penguins are black and white. So are pandas. Elephants are grey, and tigers are orange with black stripes. Everyone knows all this—in fact, for some people, it may be the only thing they know about those animals.

And yet exceptions exist to every rule about the color of animals. Every so often, a specimen gets a mutation that changes its whole appearance. The creature may stand as a weird anomaly or may even go on to form a whole new subspecies.

5 Facts You Didn’t Know about the BROWN Panda

The great panda has just one subspecies, and that’s the brown panda bear. It’s also known as the Qinling bear after its home in China’s Qinling mountains. Qinlings have dark brown fur where most pandas have black fur, and lighter tan fur where most pandas are white. Scientists say that these differently colored bears probably came about when regular pandas indulged in inbreeding.

We’ve caught sight of brown pandas since 1985, but scientists only declared them a unique subspecies in 2005. Estimates vary on how many Qinling bears exist. There could be hundreds out there hiding in the mountains, but scientists have so far ever only seen five actual specimens.

Al least 17 species of penguin waddle over this planet, so the birds can vary considerably in appearance. Your standard penguin has a black back and a white belly, but individual penguins may have colored feather crests, orange bills, white flippers, or bright yellow eyes.

And then there’s the black penguin, which is fully black, front and back. When a National Geographic photographer caught sight of one in 2010, an ornithologist called it a “one-in-a-zillion kind of mutation.” This penguin has melanism—the over-production of melanin, the pigment that colors skin. Far more birds suffer from a shortage of melanin than a surplus of it, and melanism in penguins is close to unheard of.

One half of Venus the tortoiseshell cat’s face is black. The other is orange, and patterned like a tabby. The black half has a green eye; the orange half’s eye is blue.

No one’s exactly sure how Venus got the way she did, but many believe that’s she’s a chimera. Chimeras are the result of two embryos fusing together in the womb and are actually quite common in cats. In fact, most male tortoiseshell cats are chimeras, though far fewer females are.

Venus has attracted plenty of attention from those puzzling over the mystery. She has her own Facebook page with more than 150,000 likes and a YouTube video that has been viewed more than two million times. 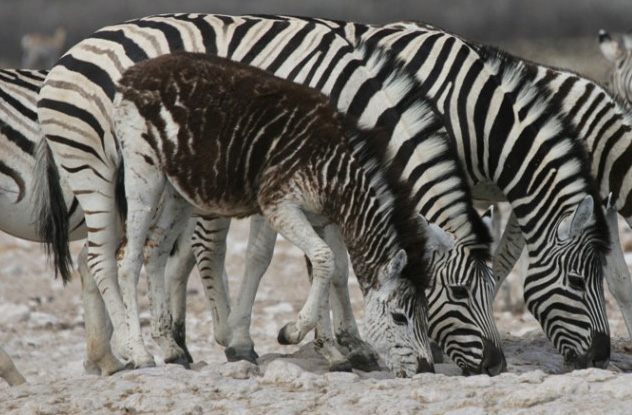 Penguins aren’t the only black-and-white animals to be born with melanism. Some zebras have melanism, and they’re more common than black penguins but are still very rare. It’s possible that melanistic zebras don’t last long in the wild.

Unlike their penguin counterparts, a melanistic zebra isn’t fully black. Instead, it has unusually wide and pronounced black stripes. These stripes make the animal look blacker than usual, but then again, every zebra is unusual in its own way. No two zebras have the same stripes—stripes are as unique as fingerprints.

Why Is This Zebra Unusually Pale? | Nat Geo Wild

While too much melanin gives a zebra a huge black stripe, too little melanin leaves it with stripes that are golden instead of black.

You may have seen photos of Zoe the Hawaiian Zebra circulating on the Web, showing her with stripes that are bright orange. These photos have been manipulated, but her real appearance is still striking. Zoe has gold stripes and blue eyes due to amelanism, a genetic disorder. She suffers from the loss of tyrosinase, an enzyme responsible for oxidation of phenols in plants and animals. 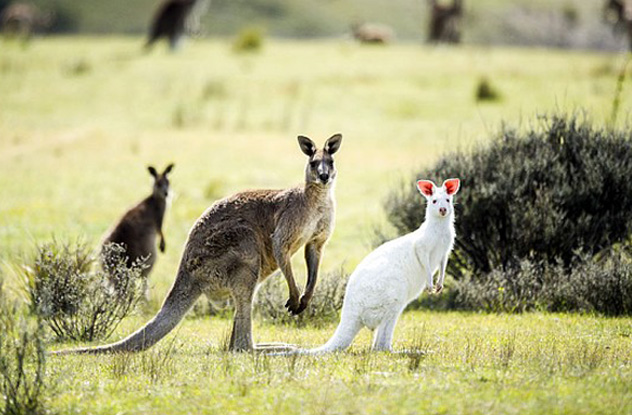 Eastern grey kangaroos, Macropus giganteus, are one of the biggest species of kangaroo. They can measure up to 210 centimeters (7 ft) in height and weigh as much as 54 kilograms (119 lb). They are also capable of leaping 8 meters (26 ft) in a single bound, jumping over 1.8 meters (6 ft) straight up, and reaching speeds of about 56 kilometers (35 mi) per hour.

Albino kangaroos are rare to come across in the wild, but one was spotted at the Namadgi National Park, southwest of Canberra, Australia. Rangers believe it to be female and have named her “Renee.” Unlike most members of her grey-coated species, Renee has snow-white fur and pink eyes.

Wildlife experts say albino kangaroos have a low possibility of survival in the wild as they are easy prey for wild dogs and foxes. They are also more susceptible to skin cancer and sunburn and are likely to have difficulties seeing and hearing. 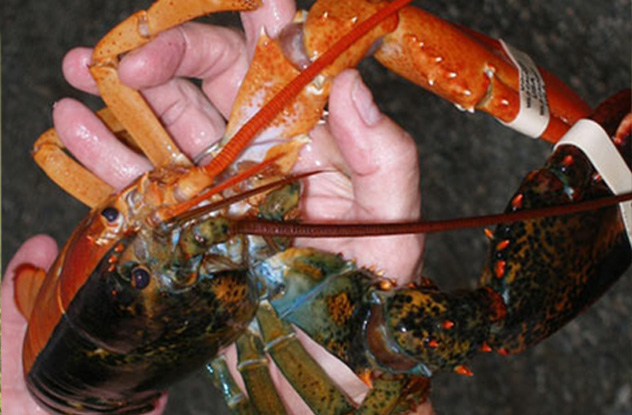 American lobsters (also called Maine lobsters) are brown but turn orange when boiled. In July 2006, an American lobster caught in Maine turned out looking half-boiled and half-cooked, as its right side was mottled brown and the left side was orange.

The shell of American lobsters has a combination of yellow, red, and blue pigments, and one half of this catch appeared orange because it lacked the blue component. The other half was unaffected because each half of an American lobster grows independently. Half-toned lobsters are a rarity indeed—the odds of getting one is about 1 in 50 million. 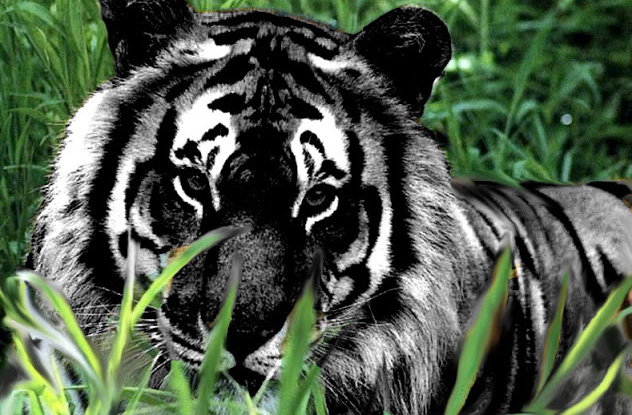 Here’s one last melanistc oddity for you. This one’s a tiger, the world’s biggest species of cat, which can weigh as much as 300 kilograms (660 lb).

Just like melanistic zebras, a melanistic tiger is not completely black. But its extra-wide black stripes are far more noteworthy than any zebra’s because tigers, of course, are normally yellow or golden.

Photographers caught sight of one melanistic tiger at the Simipal National Park in India during a tiger census in 2012. It was from the aggressive Bengal species and was of the same size as non-melanistic tigers in its age bracket.

Until its closure in 2000, the Seneca army depot in Seneca county, New York served as a storage site for World War II and Gulf War era weapons. Several white-coated deer got trapped within the depot’s walls in 1941 during its initial fencing. Thanks to favorable policies and controlled hunting, they account for 25 percent of the approximately 800 deer living in the former depot today, making them the world’s largest population of mutant animals living in a single habitat.

The Seneca white deer don’t form their own distinct species. They’re a variant of the brown-coated white tailed deer, Odocoileus virginianus. The white deer are leucistic, which means their hair has no pigment but their eyes are as brown as any other deer. This is a less extreme mutation than albinism, which would leave the deer’s eyes pink.

White elephants do suffer from albinism, but despite their name, they aren’t white. They’re pink or reddish-brown, and their rare mutation is more common in Asian elephants than in African elephants.

In Asian countries like Burma (also called Myanmar) and Thailand, white elephants were traditionally considered sacred and are not used for any form of labor. Sighting one is believed to be a sign that the leader of that country or region reigns with justice and power and that the kingdom is blessed.

The albino elephant is also the origin of the English “white elephant” idiom, which refers to things with little real worth despite their supposed value. The story goes that the kings of Siam (now Thailand) used to give literal white elephants as “gifts” to any subject they wanted to punish. Since the albino elephants were sacred, subjects couldn’t use the elephant for any sort of labor and certainly couldn’t kill it. So recipients would just keep taking care of the valuable gift until they went bankrupt.

10 Fascinating New Things We Learned About Dinosaurs In 2017