Everyone who has read any sort of science fiction has, at one time or another, thought about how cool it would be to live in those bizarre environments, such as underwater. For the last half-century people have been trying to live that fantasy—and amazingly, a lot of them have succeeded. If you’re willing to cough up enough money and don’t mind being neighbors with a tiger shark or two, there are several ways you can actually live under the sea. 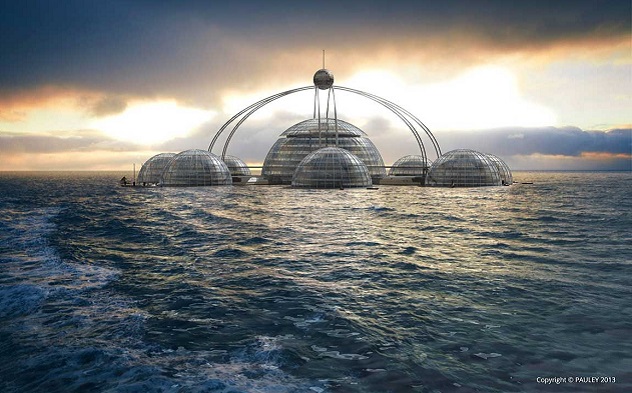 One of the most ambitious attempts to create an underwater dwelling is the brainchild of a man named Phil Pauley. The Sub-Biosphere is pretty much exactly what you would guess based on the name, and is the closest thing to an underwater city currently in the works. While it’s not yet a functioning residence, the concept art and blueprints are enough to make any of us want to venture down to the briny depths and spend an extended period submerged.

The Sub-Biosphere is comprised of multiple stories contained within pods, each of which would house up to 100 residents. Pauley’s vision is an underwater city that is completely self-sustained, incorporating areas for growing crops and supplying its own electricity. Whether the Sub-Biosphere ever comes to fruition remains to be seen, but Pauley continues to work tirelessly on the logistics and funding to get the operation off of the ground—as well as, a bit too coincidentally, a work of fiction based on the structure.

How could anyone ever even talk about the idea of living underwater without bringing up the one and only Jacques Cousteau? The most famous aquatic expert in history successfully created underwater living and research facilities. Unlike something like the Sub-Biosphere, the Conshelf project wasn’t designed for long-term living, though it featured most of the comforts of home in a giant metal drum. The Conshelf project existed for three iterations, with the Conshelf III becoming home to six researchers who lived submerged for nearly a month.

The idea began in 1962, when the Conshelf I sat 10 meters (33 ft) under the surface of the Mediterranean off the coast of Marseilles. The small, cramped confine technically called the Diogenes was home to a pair of scientists for a week. It came equipped with a library, television, and radio, and was used as a research station to study marine life. Shortly after the success of the Conshelf I experiment, Conshelf II was launched. It came with even more fantastical amenities, such as a garage, an aquarium, and another research facility burrowed deeper into the sea, this time housing five people for a month. Finally, the most ambitious project was the Conshelf III, nested an incredible 100 meters (328 ft) beneath the water’s surface. 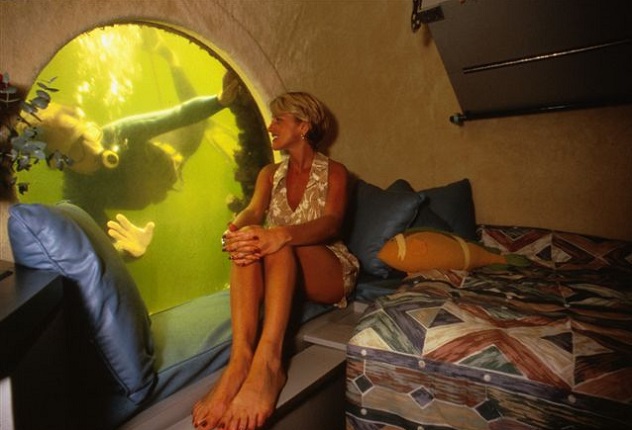 What began as La Chalupa Research Lab, a facility that was actually not run by Taco Bell, became Jules Undersea Lodge after it outgrew its usefulness as a station in which marine life was studied off the coast of Puerto Rico. It’s been a particular favorite of celebrities since it was converted into an undersea hotel of sorts.

The entirety of the structure is submerged at the bottom of a lagoon and monitored by a land-based control center. Visitors arrive in the lodge via an underwater port that brings them up into the center of the facility. There are two bedrooms and a common living area in the lodge, which even features air conditioning, because it’s apparently not as cold at the bottom of the sea as movies would have you believe. The common room includes a TV and DVD player as well as a telephone. There are also giant glass portholes in each of the bedrooms, letting nosy divers stare at you while you’re sleeping, so it’s definitely not for the shy. 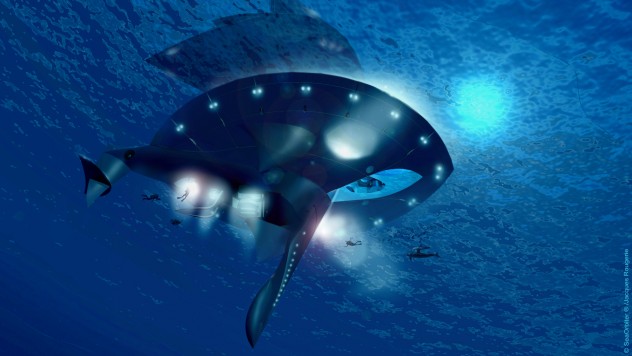 The SeaOrbiter is a concept for a fully mobile, mostly underwater research and exploration facility. It’s a sort of underwater space ship, drifting around the world to facilitate the study of the ocean and the animals living in its depths. The Galathee Underwater Lab, launched by Jacques Rougerie in 1977, served as an inspiration for the project. This was an underwater habitat designed for minimal disturbance of the marine world which could be placed anywhere from 9–60 meters (about 30–200 ft) under the ocean’s surface.

Much like the space stations on which it’s based, the SeaOrbiter would allow long-term voyages around the world that could accommodate around 20 people at a time. The leaders of the project plan to launch undersea vehicles that would allow them to explore up to 6,000 meters down. It could also potentially be used to help train astronauts, since the pressurization and isolation is similar to the conditions of outer space. The SeaOrbiter is actively seeking funding, having current met 45 percent of its goal. 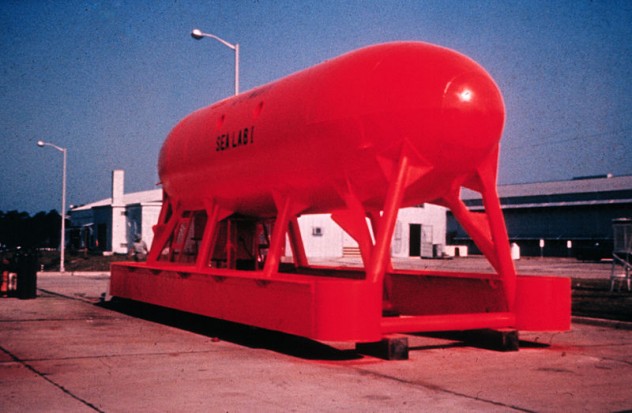 One of the early attempts to allow people to live below the ocean’s surface was the SEALAB project, which is not the cartoon you watch late at night while eating the research labs you ordered from Taco Bell. Like the Conshelf, the SEALAB project also came in a set of three, the first of which was launched off the coast of Bermuda in 1964 but cut short by an approaching storm system.

SEALAB II launched in 1965 and featured comforts that the first incarnation couldn’t offer, such as hot running water and refrigerators. It was over 17 meters (57 ft) long and submerged 62 meters (203 ft) underwater, occupied by rotating teams of divers living underwater for periods of roughly two weeks each. Among those who lived in SEALAB was Scott Carpenter, who gained fame as one of the Mercury 7 astronauts. Carpenter placed an underwater call to fellow Mercury 7 astronaut Gordon Cooper, who was orbiting the Earth in the Gemini space capsule at the time, because astronauts are show-offs.

SEALAB III launched in 1969 off the coast of California, but the project ended in tragedy when the facility began to leak and unsuccessful repairs led to the death of “aquanaut” Berry Cannon. 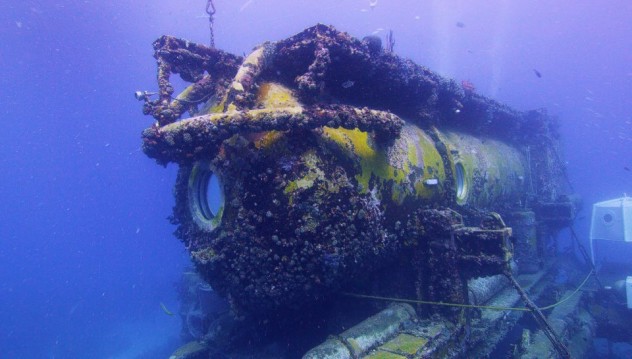 If you happen to be a student at Florida International University, you may actually be granted access to one of the last remaining operational underwater research facilities in the world, the aptly named Aquarius. For up to 10 days at a time, researchers glide away in the Aquarius to study marine life off the coast of the Florida Keys. The metal cocoon can resist the water pressure up to 37 meters (120 ft) beneath the surface of the ocean and house up to six people at a time.

Inside the Aquarius is a fully stocked apartment which includes refrigerators, air conditioning, showers, toilets, microwaves, and even Internet access. As recently as this past November, a group of marine science majors at FIU spent a week living and conducting research in Aquarius. University tuition is probably a lot more affordable than a stay in a commercial underwater hotel, making the Aquarius the premier destination of ocean lovers on a budget. 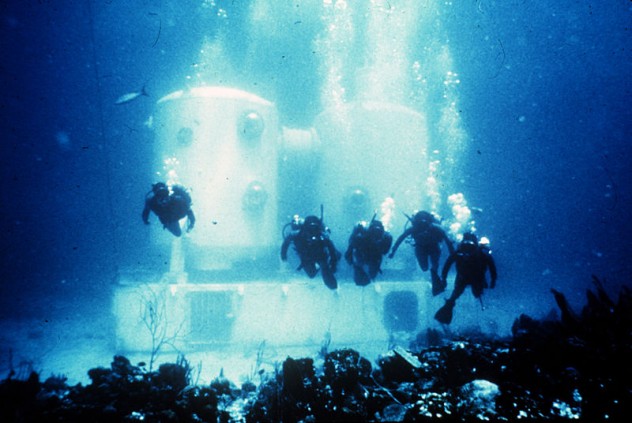 In 1969, the United States government funded a project called Tektite named after meteors that would crash into the ocean and come to rest on the sea floor. Project Tektite was comprised of four aquanauts who lived in the submerged station from February–April 1969 and was supposed to train astronauts for long trips in space.

The second incarnation of Project Tektite was launched in 1970 and facilitated 11 different missions, allowing 53 aquanauts to spend 2–3 weeks submerged in the underwater habitat which looked more or less like a couple of gigantic metal tanks. It had crew quarters and an equipment room connected by a bridge, plus a base research area. The quarters allowed the comforts of home, with radios and televisions along with bunks and a nearly full kitchen included. While it’s no longer operational as a research laboratory, you can still view the habitat at the Tektite Museum. 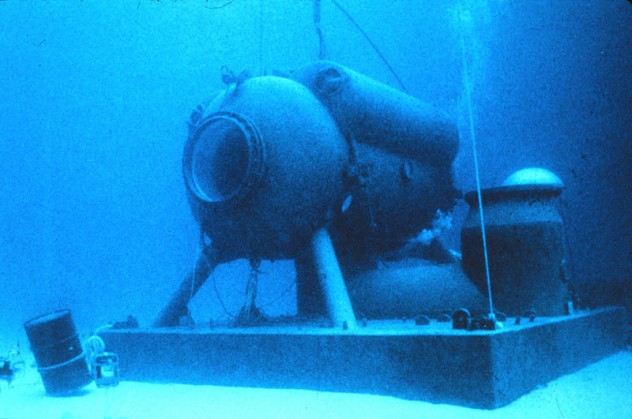 Over the years, hundreds of researchers used the National Oceanographic and Atmospheric Administration’s Hydrolab as a base for scientific study in the Atlantic Ocean. Located off the shores of the US Virgin Islands, Hydrolab enabled scientists to work for weeks at a time at the bottom of the ocean, with up to four scientists calling the place home at a single time.

The facility itself was fairly small and cramped, at just 5 meters (16 ft) long and 2.5 meters (8 ft) high, and submerged up to 40 meters (131 ft). While a less than ideal environment for the claustrophobic, it did have running water, electricity, and bunks, along with large viewing ports to observe the underwater world around you. After operating for more than a decade, Hydrolab was retired from service in 1986, but it can still be viewed at the Museum of Natural History.

Dennis Chamberland is a bit of a dreamer, but he’s the rare variety of dreamer who actually gets things done. It probably helps that he’s a NASA engineer whose goals are things like trying to make it possible for human beings to live both underwater and in space. Chief among his plans is the Atlantica expedition, which is his very real, very serious attempt to create an actual underwater city.

Chamberland has already constructed a two-person habitat, but his ultimate goal is to create a vast society that will allow people to remain almost indefinitely on the floor of the ocean. According to his plans, Atlantica would have the feel of a neighborhood apartment complex in addition to being a research facility. When he’s asked about life in his proposed community, he casually throws out incredible descriptions of Jetsons-esque scenarios like people hopping into their submarines to go see a movie. 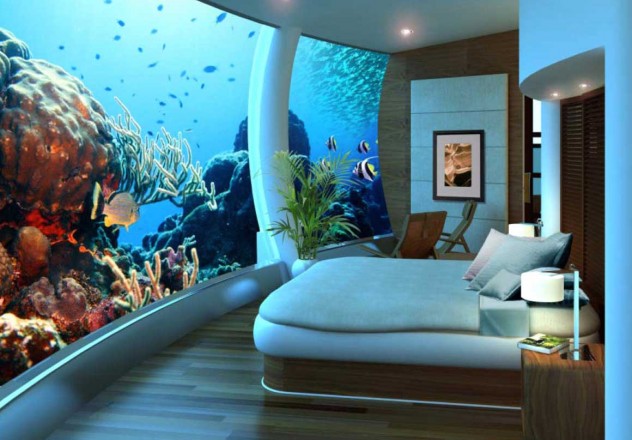 While most underwater habitats are off limits to anyone who isn’t a marine scientist or willing to wait until the next decade for funding to be secured, there is one other option. For the low price of just US $10 million, you can own your very own luxury underwater home—or rather, H2OME. The same people who have planned one of the most famous underwater hotels in the world, the Poseidon, are now offering custom-built underwater homes.

The company, US Submarine Structures, is apparently trying to corner the market on undersea properties—its website lists underwater casinos and restaurants, in addition to full houses, among the array of aquatic possibilities. They boast that the homes maintain the same pressurization as the surface, meaning you don’t ever have to get wet on your way to the stairs and or up the elevator. The homes are comprised of two floors, with a pair of bedrooms, lounge areas, and everything else you could ever want in a dwelling that is perfect for aspiring Bond villains of the world.

Follow Jeff on Twitter, and if you are Aquaman, drop him a line and he’ll see about finding you a cozy underwater home in Fiji for a reasonable price.