The Ford Model T was the first affordable automobile. Henry Ford famously said that his vehicle was targeted at the common man. Only the rich could afford a car before the Model T came along, and it actually became less expensive throughout production. It cost $850 at the time it was unveiled in 1908 and continuously got cheaper, reaching under $300 in 1925.[1]

This was possible thanks to the moving assembly line invented by Henry Ford. However, that is not the only notable fact about the vehicle. There are a few more, from how it got its famous nickname (the “Tin Lizzie”) to claims that it was the cause of Prohibition.

10 The Model T Did Not Cause Prohibition 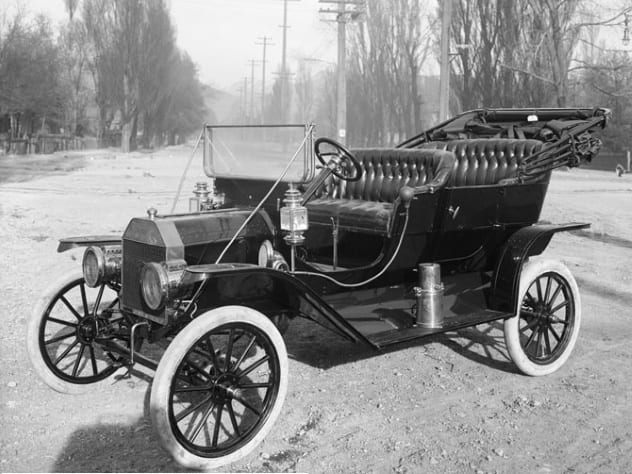 There are claims that Henry Ford designed the Model T to run on ethanol instead of gasoline. Supporters of this claim say Ford only switched to gasoline when the sale of alcohol was banned during Prohibition.

Some conspiracy theorists say oil magnate John D. Rockefeller convinced the US government to introduce Prohibition just so the Model T would only run on gasoline. These claims are false, along with similar claims that the Model T could run on different fuels, including diesel, benzene, and kerosene. Some even add that the vehicle had a device that allowed the driver to switch between different sources of fuel.

In truth, Henry Ford did experiment with using fermented plants as fuel for the Model T. He even made statements indicating a possible switch from gasoline to ethanol. However, he made those statements in 1916 and 1925, when the Model T had been in production for some time.[2] Ford never made the switch because gasoline was dirt cheap at the time.

9 It Was Quite Versatile

The Model T was a very versatile vehicle. This meant that people used it for more than just getting around. The Model T was used as a tractor, snowmobile, grain mill, sawmill, and more.

Repurposing of the Model T was so common that businesses sprang up to provide aftermarket kits to turn the Model T into something other than a car. Magazines of the day also dedicated columns to teach people how to modify their Model T to serve some other purpose.

Individual owners also modified their vehicles to taste. One minister turned his Model T into a mobile church. Rail companies replaced the wheels of the Model T with metal tracks, turning them into railcars. They used the railcars to inspect the tracks and switch engines between trains in rail yards.

Other owners turned their Model T into mills by replacing one of the rear tires with a leather belt drive connected to a pulley. The engines of damaged Model Ts were not spared from work, either. They were removed and used to power boats and pumps.[3]

8 It Was Unbelievably Difficult To Drive The Ford Model T was unbelievably difficult to drive. It’s probably easier to drive an excavator today than to drive a Model T. People of the day didn’t care, though, because there was no agreed-upon standard on how vehicles worked. They considered the Model T normal, even though people who have attempted driving it today think otherwise.

The Model T did not have any gauges, so drivers manually checked the water, oil, and gasoline levels. Starting it was no walk in the park, either. The driver manually cranked the engine to start the vehicle. The engine sometimes backfired, which could break the driver’s arm. Ford included an electric starter in models made from 1919 onward.

The Model T’s throttle was operated by hand. The firing of the spark plugs was also controlled by hand. The driver had to operate both while driving.

The vehicle had three pedals. One was the brake, while the other two involved shifting gears. The brake pedal was installed at the far right, where we have the gas pedal today. One of the two gear pedals allowed the driver to switch between first, second, and neutral, depending on how far in they pressed it. The other was for reverse.[4] The first Model T cars were available in red, blue, green, and gray. Later Model Ts were only available in black. Henry Ford switched to an all-black vehicle because the different paint jobs slowed down the assembly line.

However, car dealerships were unimpressed because they wanted to offer more choices to their customers. Some of the customers were complaining, too. The dealerships later requested that Ford make more color options available. They also appealed to Ford to make different versions of the Model T—the sort of thing carmakers do today.

Henry Ford is said to have stated: “Any customer can have a car painted any color that he wants so long as it is black.” He also added that he would continue to build only the Model T without any modifications whatsoever.

In his 1922 autobiography, My Life and Work, Ford mentioned that he’d actually made the statement in 1909, a year after he built the first Model T. However, Ford didn’t start releasing only black Model Ts until 1914. He wrote that not one person thought he had made a good decision. Ford acknowledged the need to listen to customer complaints but noted that “when the suggestion is only as to style, one has to make sure whether it is not merely a personal whim that is being voiced.”[5]

6 It Was Replaced With The Model A 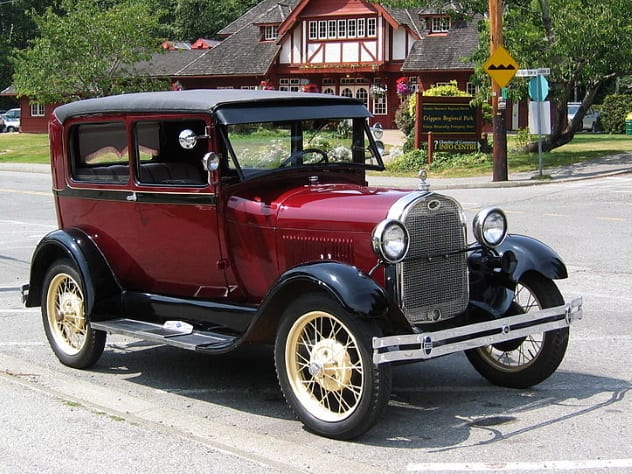 Henry Ford called his first car the Model A. The next was the Model B and so on until he reached the Model T. In 1927, Henry Ford unveiled a new vehicle he called the Model A, rather than the Model U. This Model A often has something like “(1927–1931)” written after it to differentiate it from the earlier Model A.

Ford named his vehicles from Models A to T because every new model was a modification of the previous one until he hit gold with the Model T. The Model T was so successful that Ford wanted to continue building it forever. That changed when competition from other carmakers sent sales of the Model T into a decline in the mid-1920s.

Henry Ford ceased manufacturing the Model T in May 1927 and replaced it with the new Model A that November. The Model A was partly designed by his son, Edsel, who had tried to convince Henry to cease production of the Model T few years earlier. Henry refused, but Edsel continued working on his new car anyway. That car was the basis for the Model A.

Ford switched from the old naming system to indicate that the new Model A was designed from scratch and not a modification of the Model T. The Model A had unique features, including a speedometer, water pump, and gas gauge. The Model A was successful like its predecessor. Ford churned out 9,200 cars a day at its height.[6] The Ford Model T went by a few nicknames, including the “flivver” and the “Leaping Lena.” However, its most common nickname was the “Tin Lizzie.” The Model T got that name from a race.

At the time, car dealerships regularly hosted automobile races to publicize the cars in their collection. One such race was held at Pikes Peak in Colorado in 1922. One of the contenders was Noel Bullock and his Model T, which he called “Old Liz.”

Old Liz was truly old. Its body paint had faded, and its hood was missing. Spectators started calling it the Tin Lizzie over concerns that it looked more like a tin can than a vehicle. Nevertheless, the battered Old Liz went on to defeat the cleaner and more expensive cars in the race. Newspapers reported the surprising win but called the car the Tin Lizzie instead of Old Liz. The name stuck.[7] The Oldsmobile Curved Dash was the Model T of the very early 1900s. However, Olds couldn’t manufacture enough vehicles to meet demand, so he invented the assembly line to speed up production. The assembly line allowed Olds to scale from building 425 cars in 1901 to 2,500 a year later. By 1904, he was building and selling 5,000 cars a year.[8]

Henry Ford built on Olds’s idea but added conveyor belts that moved the cars around the factory. This was the first moving assembly line. This allowed Ford to build a Model T in less than three hours, down from the 12 hours and 30 minutes it previously took. Ford had gotten the idea of the moving assembly line from the conveyor belts used in flour mills, meat plants, and other factories. 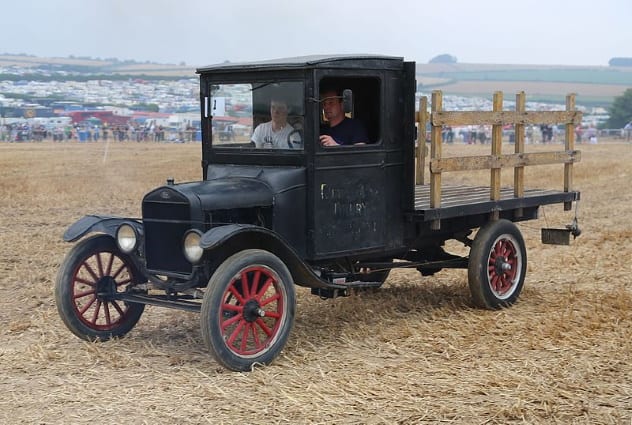 Most people do not know that Henry Ford made a truck version of the Model T. The Model TT was a Model T with a bed in place of rear seats and a heavier frame.

As we mentioned earlier, Ford never wanted to make any other version of the Model T. However, he made an exception after observing many Model T owners replace their rear seats with a wooden bed. The first Model TT truck went on sale on July 27, 1917. Ford sold 209 vehicles before the year was over.

Chevrolet jumped on board the pickup bandwagon a year later in 1918. Dodge followed suit in 1924. The Model TT went out of production in 1927 and was succeeded by the Model AA truck the same year. The Model AA was rebadged as the successful F-series in 1948. The F-series has been a top seller in the US vehicle market since 1977.[9]

2 Ford Did Not Advertise The Model T 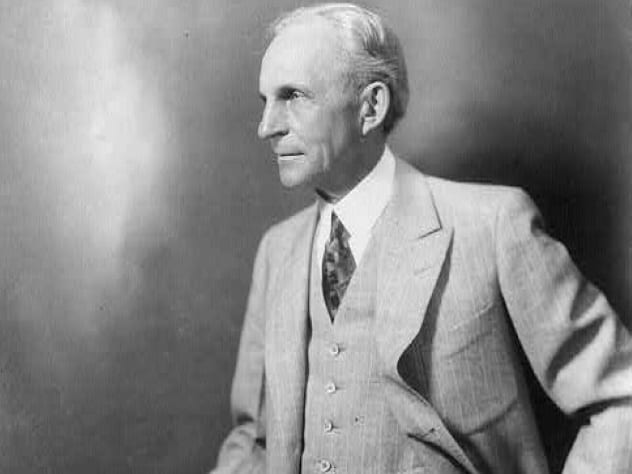 Ford’s Model T was the Tesla of its day. The Model T was so successful that Ford did not run advertisements and depended on word of mouth to drive sales. That is the sort of thing Tesla does today.

Ford initially did some advertising from the time he invented his car until 1917, when he stopped all advertisements. He did not run a single ad between 1917 and 1923. This made sense, considering that the Model T was the dominant vehicle at the time, and every prospective car owner looked his way.

Interestingly, most Ford car dealerships still ran adverts to entice would-be car buyers to acquire their Model Ts from them. Meanwhile, General Motors and Chevrolet—Ford’s primary rivals at the time—ran massive ad campaigns to promote their vehicles. This culminated in Chevrolet overtaking Ford in sales in 1931. Ford only became the top seller again in 1957.[10]

1 Poland Modified It Into A War Vehicle 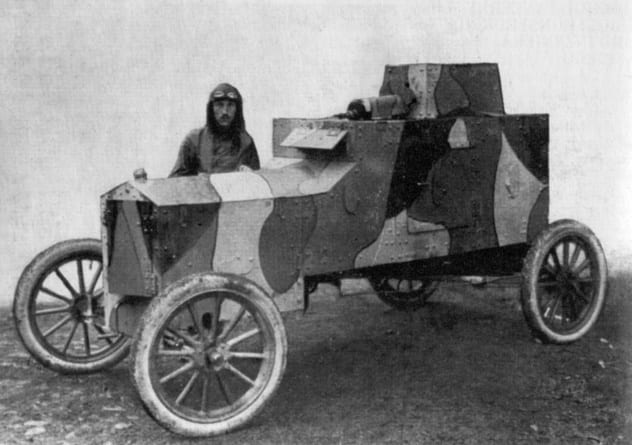 Poland created an armored version of the Model T in June 1920. It was called the Ford FT-B, alternatively known as the Model 1920 or the Ford Tf-c. The vehicle was the brainchild of one Tadeusz Tanski (pictured above with his invention), who worked with the Polish Ministry of Military Affairs at the time.

Poland decided its 120 Renault FT tanks were too slow to outmaneuver the Soviet cavalry. It needed something faster. Tanski came up with a proposal to weld steel armor captured from the German Army during World War I to the chassis of a Ford Model T. The result was the Ford FT-B.

The Ford FT-B was small and fast, just as the Polish army hoped. It only required a driver and a machine gunner to operate. However, it was notoriously uncomfortable. The machine gunner could not even stand upright when firing. A later proposal to build 90 improved versions was rejected after the war ended in 1921.[11]

Read about more unique and notable automobiles on 10 Wonderful Cars And Their Strange Qualities and 10 Crazy Features Of Old Cars.