Although he never fired a bullet in combat or rescued a damsel in distress, John Wayne is remembered as a hero, the kind of guy your grandfather looked up to. Wayne had a vast filmography, appearing in nearly 250 movies. Some of his best roles were taken on when he was in his late sixties. Below are 10 facts about an American icon, from his brush with the KGB to rumors about his colon. 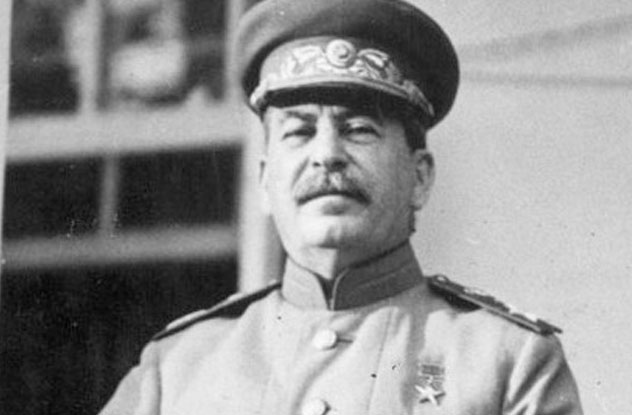 Joseph Stalin was quite the film buff and found himself outraged at the anti-communist sentiments Wayne expressed in the late 1940s. Reportedly, he ordered a hit on the movie star, dispatching two KGB assassins in 1951. But the FBI were wise to the plot and intercepted the two hit men. The agency also allegedly foiled other plots to kill Wayne, including a sniper attack when he visited Vietnam in 1966.

As evidence that Stalin was responsible, we have, first, the word of an unnamed Soviet source. But we also have the word of Stalin’s successor, Premier Nikita Khrushchev. When Khrushchev met John Wayne in 1958, he apologized for the incident, telling him, “That was the decision of Stalin in his last mad years. I rescinded the order.” 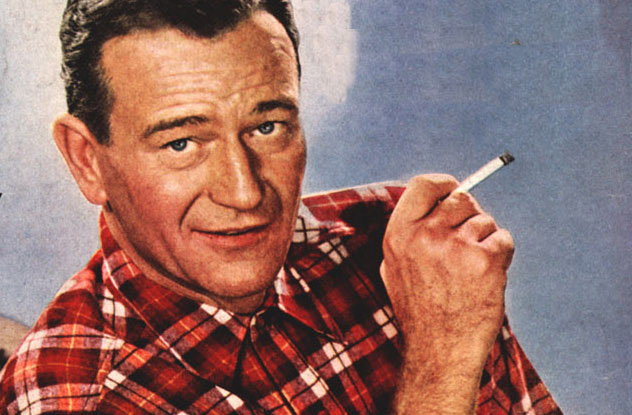 Photo via Stanford School of Medicine

Wayne’s greatest film successes came as a Wild West lawman. His most inappropriately cast role, on the other hand, was surely the Mongol warlord Genghis Khan in the 1956 film The Conqueror. The movie was excruciatingly unwatchable on its own, and its ugly legacy makes it even worse.

Much of the film was shot on location in Utah, downwind of Nevada’s nuclear test sites. In the years that followed, nearly half of the people on set were diagnosed with cancer, including two of Wayne’s own sons. John himself battled cancer in his later years (he coined the term “The Big C”). In 1964, pulmonary cancer cost him four ribs and his entire left lung. He died of stomach cancer on June 11, 1979, aged 72.

Wayne dismissed the “Curse of The Conqueror.” He believed his cancer was a consequence of smoking. This makes perfect sense; he had a six-packs-a day-habit.

In 1985, Wayne’s estate allowed the use of his name for the John Wayne Cancer Foundation, which advocates various programs to fight the disease.

8Marion And The Duke 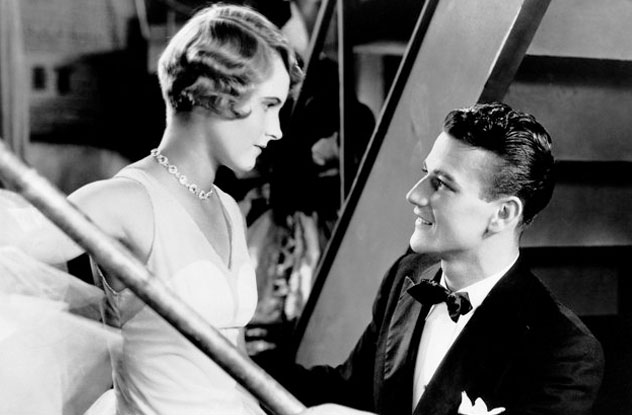 John was born Marion Robert Morrison on May 26, 1907. His parents had a strange affinity for the name “Robert,” and they decided to squirrel it away for the next child, so Marion’s middle name was changed to Michael.

When Marion roamed the neighborhood, he never went anywhere without his Airedale terrier Duke at his side. The two were such constant companions that local firefighters began calling the boy “Little Duke.” The nickname stuck for life. He certainly preferred it to the feminine “Marion.” (Another famous Marion who hides behind a nickname is Death Row Records founder Marion “Suge” Knight).

When the man began working in film, studio bigwigs were no more impressed with his name than he was. He appeared as “Duke Morrison” in 1929’s Words and Music, and in 1930, director Raoul Walsh and Fox Studios executive Winfield Sheehan started billing him as “John Wayne.” The young actor had no say in the matter, and he was largely ambivalent about the name. He preferred to go by “Duke” with those in his inner circle. 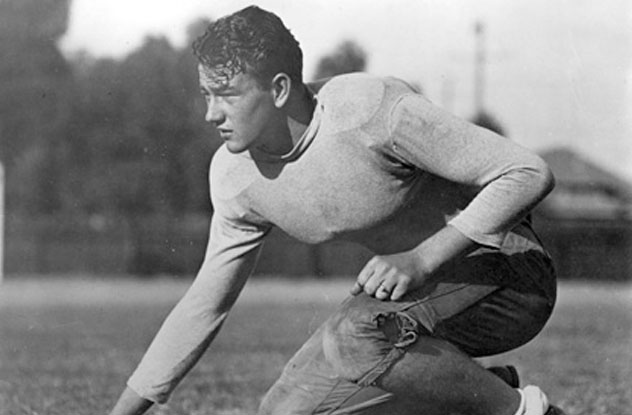 John Wayne stood at 193 centimeters (6’4″). That’s tall today, and for a man born over 100 years ago, it was massive. Young Marion easily scored a football scholarship to the University of Southern California, playing as an offensive tackle. Then, as now, college athletes weren’t paid, and Coach Howard Jones found him a job working for Fox Studios as a laborer and prop man.

While out body surfing with a friend on Balboa Beach just before the start of his junior year, Marion got caught up in a huge wave and smashed against the sand, badly injuring his shoulder. He tried to continue football, but he was too hurt to play well. Coach Jones moved him down on the roster and denied him his meals. Hungry and strapped for cash, the young man quit football and devoted all his time to Fox Studios. 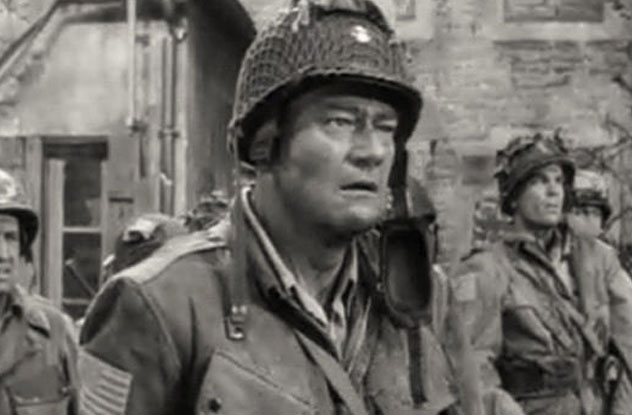 Many of John Wayne’s major roles showed him as a war hero, but he never actually served in the military. Born in 1907, he was too young to participate in World War I. By the time the US entered World War II, he was 34 years old and just beginning to become famous.

He also had health issues, including a bad back (from performing his own stunts), chronic ear infections, and the torn shoulder muscle that derailed his football career. Had he actually undergone a physical, he might have been classified as 4-F, or unacceptable for military service. Instead, his studio successfully applied for him to receive a 3-A deferment (“hardship to dependents”) because he had a family.

Given his fame, Wayne would likely have been granted a ceremonial role if he had enlisted. Yet he likely he did more for the war effort by appearing in films that glamorized the military. He also applied to work for the OSS during the war, and he spent months doing USO appearances for the troops. 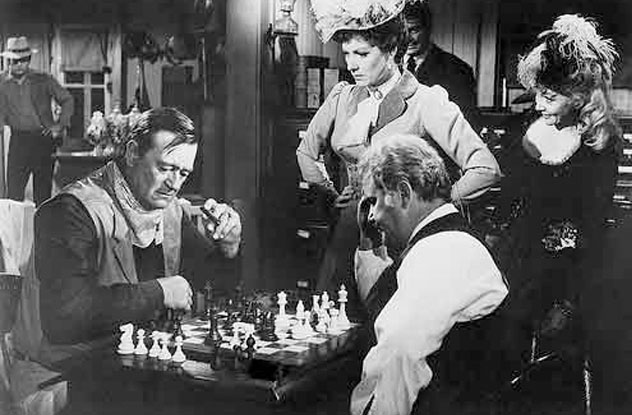 One of Wayne’s favorite pastimes was playing chess. He was a skilled player but was not beyond using duplicitous means if he could get away with it.

At first, Christopher didn’t know what to do, and he complained to veteran actor Ed Faulkner, who’d worked with Wayne on several projects. Ed advised Christopher to call John out on it.

The next game, John was up to his old tricks, and Christopher told him, “Excuse me, Duke, but you’re cheating.” Wayne was unperturbed, responding, “Well, I was wondering when you were going to say something. Set ’em up. We’ll play again.” 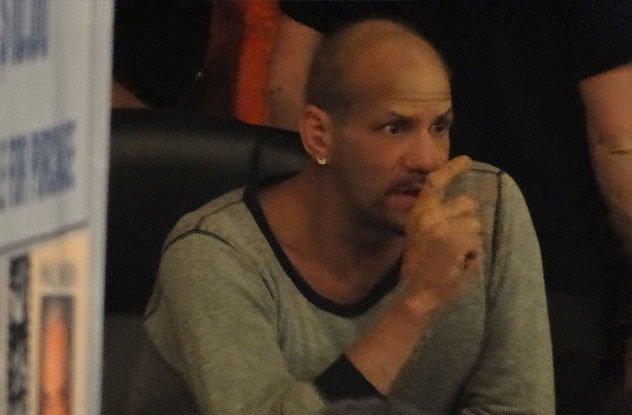 American boxer Tommy Morrison briefly held the WBO and ICB heavyweight championship titles. He portrayed mulleted Tommy “The Machine” Gunn, the main antagonist, in Sylvester Stallone’s Rocky V. He also happened to be John Wayne’s grandnephew, and he went by the nickname “The Duke.”

While Morrison had some success in the ring, he seemed almost doomed from the start. His father was an abusive alcoholic, and his mother had gone on trial for murder. His older brother Tim did 15 years in prison on a rape conviction. In 1996, Morrison announced that he’d contracted HIV due to a “permissive, fast, and reckless lifestyle.”

In the years that followed, he dropped out of boxing and had frequent brushes with the law. He also went through a survivalist phase in which he slept in a cave, convinced the world would soon end. In 2006, he emerged to say that the original HIV tests had actually been false positives, and he was free of the disease. He tested negative in 2007, likely due to tampering with blood samples. In 2011, Quebec required him to take a supervised blood test if he wanted to box in the province, and he refused.

Morrison in fact still had HIV, and he did very little to fight his infection. HIV-positive Magic Johnson reached out to him, but he didn’t respond. He only spent a month taking the AZT antiviral drug. Morrison withered away and died of AIDS-related complications in 2013 at age 44 after spending over a year bedridden. 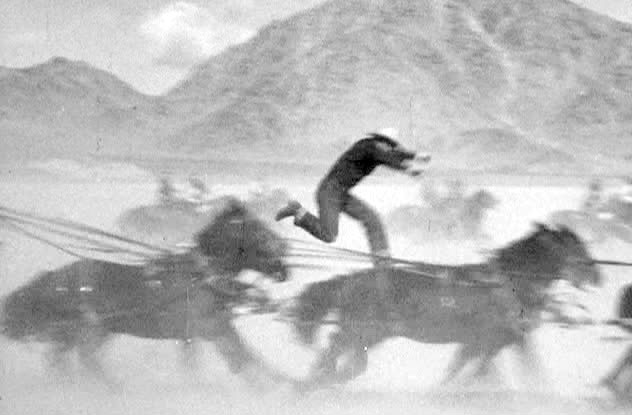 Many stuntmen in Western films were former rodeo workers. The most legendary of them all was no doubt Yakima Canutt, a rodeo world champion. Canutt worked closely with John Wayne over the years, and perhaps their greatest innovations were in creating methods to produce exciting, realistic fight scenes. Fights in early films had been noticeably lame, generally no more than stiff, one-punch knockouts.

But John Wayne owes an even deeper debt of gratitude to Canutt. Many of his signature mannerisms—the squinting, the towering saunter, the drawling, deliberate speech pattern—were copied directly from Yakima.

Canutt suffered innumerable injuries, including broken ribs and legs. A horse fell on top of him, severing his intestines, and a bull’s horn ripped his face open. Yet despite all that, he died of natural causes, aged 89.

JOHN WAYNE AND HIS LACK OF HAIR COMMENTS.wmv

John Wayne would seem the last person to adopt the typical Hollywood affectation over appearance. You would have never seen him at the plastic surgeon trying to preserve his youth with Botox. But after his hair began thinning in the 1940s, he did begin wearing a wig for movies and certain public appearances, probably at the request of the studio. Yet he made no secret that he was bald; when hanging out with family and friends, he would always go au naturel, and he was not shy about being filmed or photographed without his hairpiece.

In 1974, he appeared at Harvard University, where he unflinchingly stood up to a fusillade of questioning from the student body. Though pushing 70, he had a ball with the kids. One student asked, “Where did you get that phony toupee?” He replied, “It’s not phony. It’s real hair. Of course, it’s not mine, but it’s real.” 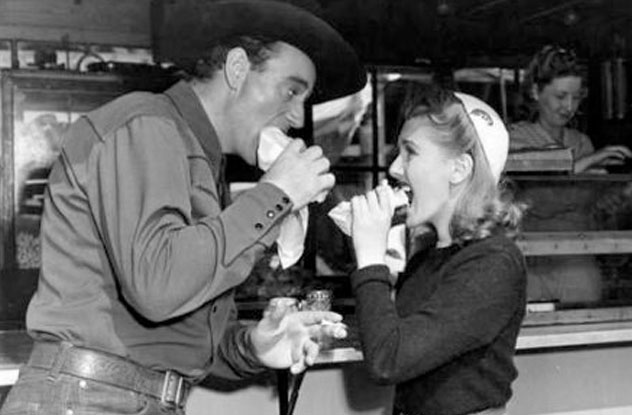 Perhaps the most laughably disturbing rumor about John Wayne was that, upon his death, an autopsy found several pounds (40, say some sources) of undigested red meat lodged in his digestive tract.

The story checks all the boxes of a tantalizing urban legend—a famous personality, death, dietary excess, bowel movements (or lack thereof). However, it can be immediately dismissed without even considering the biological impossibilities. John Wayne was 72 years old when he died and had been ravaged by cancer for a long time. There was little doubt that he’d succumbed to natural causes, so he didn’t receive an autopsy.

Unfortunately, this story could be applied to Elvis Presley, who died at the young age of 42. Elvis had a congenital twist in his colon and a history of drug and laxative abuse. When he died, he had a great deal of chalky feces lodged in his colon.