As we’ve mentioned before, conspiracy theories abound just about anywhere on this planet, from America to Asia and everywhere in between. This time, we’ll focus on the craziest conspiracy theories to have come out of the Middle East. In a region beset by political and religious turbulence as well as a general suspicion of outsiders owing to decades of Western dominance, conspiracy theories have found an audience readily willing to accept them as the explanation for seemingly inexplicable problems. 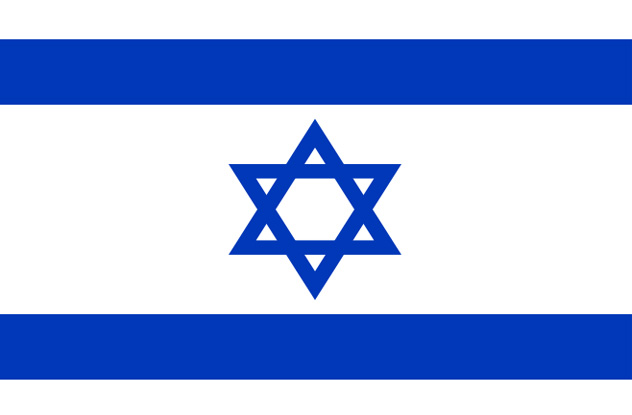 Similar to the world-famous conspiracy theory that the Jews are planning world domination is their alleged plan for the creation of a “greater Israel.” According to this conspiracy theory, this super-state would contain virtually all of the Middle East, with Israel as the capital.

Although Israel’s neighboring Arab countries peddled this theory for decades, Palestinian leader Yasser Arafat in particular spread this theory in the 1990s when he pointed to three supposed pieces of evidence of Israel’s expansionist goals. First, he claimed that the country’s 10-agora coin contained an image of greater Israel. Second, he showed a scholarly paper made by a Dr. Gwyn Rowley of England which supported his allegation that the map indeed represented greater Israel. Lastly, Arafat pointed to Israel’s flag and stated that the two blue lines represented the Niles and Euphrates, which would serve as the super-state’s new borders.

Although Arafat later died, the conspiracy theory that he popularized lives on.

9 The US Allowed Saddam To Invade Kuwait 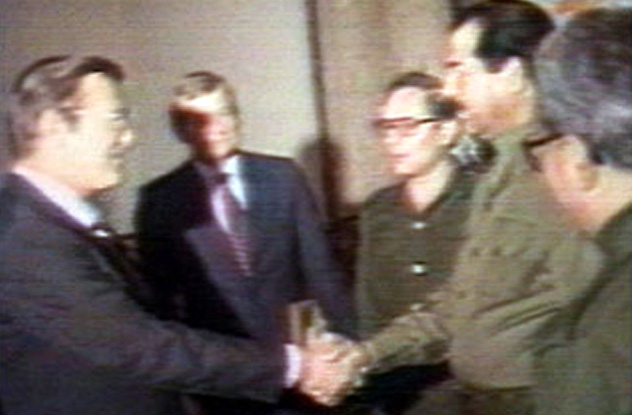 Just like its 2003 counterpart, the 1990 Gulf War was mired deep in controversy and conspiracy theories. According to the craziest one, the US deliberately gave Saddam Hussein the go-signal to invade Kuwait. Unfortunately for the Iraqi dictator, the US intended to use him as a tool to raise oil prices and as an excuse to permanently station their military in the Middle East.

Believers of this theory point to then-President George Bush Sr. and his Defense Secretary Dick Cheney’s links to bigwigs in the oil industry. However, for them the most damning piece of evidence would be US envoy April Glaspie’s statement to Hussein prior to his invasion of Kuwait, when she proclaimed that her country “would have no opinion on the Arab-Arab conflicts, like your border disagreement with Kuwait.” According to them, this was tacit American approval for Hussein to go ahead and invade.

8 The House Of Saud Is Secretly Jewish 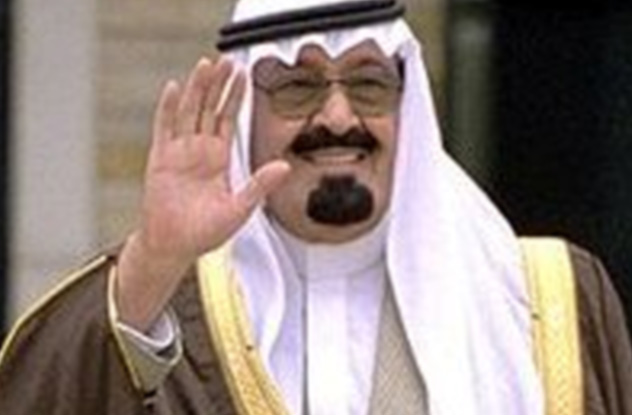 Just like the conspiracy theory that Iran’s clerics are secretly British agents, this one puts another ruling class on the spot: Saudi Arabia’s House of Saud.

According to this conspiracy theory, the Saud family—which has ruled the country undisputed for centuries—originated with a Jewish merchant from Iraq named Mordechai bin Mushi, who ingratiated himself to a group of Arab merchants visiting his country by bestowing them with gifts. He then went back with them to Najd in the center of the Arabian Peninsula where he steadily consolidated his power until his family became one of the most influential in the region. Later on, the family met the founder of Wahhabism—a Jew from Turkey, according to the theory—and formed the Jewish state of Saudi Arabia.

Since then, the Saud family has supposedly engaged in bribery, blackmail, and outright murder to conceal the fact that they descended from a Jew and are really protecting Israel’s interests. To be fair to the Saud family, they are not the only ones accused of being Jewish . . . 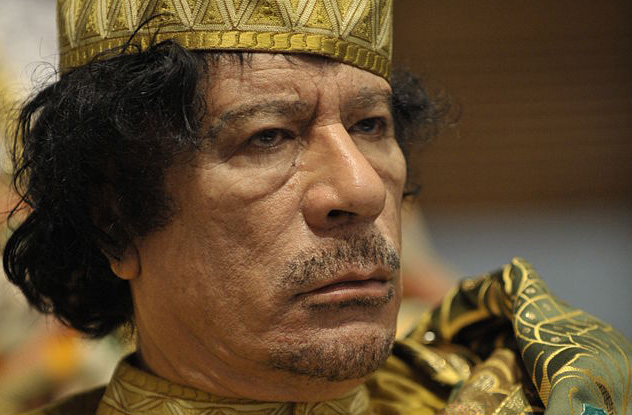 Was the late Libyan dictator Muammar Gaddafi, known all over the world for his off-the-wall antics, Jewish? According to this theory, Gaddafi’s grandmother—or mother in another variation—was a Jew who left Israel and married a Muslim.

Gita Boaron, a Libyan Jew who settled in Israel and one of the notable claimants of Gaddafi’s Jewish heritage, asserts that Gaddafi’s grandmother was her own grandmother’s sister, making Boaron Gaddafi’s cousin. She claims that under the law of Israel, this made Gaddafi eligible to settle in the country should he have ever chosen to do so.

Her beliefs have been backed up by the Libyan Jews living in Netanya in Israel’s Northern Central District, one stating that Gaddafi would have felt at home among them. Unfortunately, it seemed that Gaddafi did not care much for his Jewish origins; according to one his former aides, the dictator had everyone—including his Italian ambassador—killed off because they discovered the truth about his heritage.

No Muhammad, No Mecca What is This? |illuminati insulting Islam_Hindi&Urdu

We’ve previously talked about some of the most insane Jewish conspiracy theories, but this one’s even wackier than most. According to conspiracy theorists in some Arab countries, Jews use Western soft drinks to subvert their countrymen. Evidence can allegedly be found in hidden anti-Islamic messages on Coke and Pepsi labels.

For starters, they assert that the word “Coca-Cola,” when arranged in a certain way, translates to “No Mohammad and No Mecca.” On the Pepsi side of things, they argue that the word is really an acronym for “Pay Each Penny Save Israel.”

Believers hold that the soft drinks contain pork extracts such as blood as supposedly confirmed by studies. Not only that, Coca-Cola also allegedly contains alcohol, a belief that was highlighted in 2011 when an Israeli Muslim filed that charge against the soda company in court.

5 The US Is Funding The Muslim Brotherhood

As we can see, being the world’s police force has subjected the US to many conspiracy theories, ranging from the plausible all the way to the outright insane, such as the country being allied with North Korea. In that same vein, America is also supposedly allied with Egypt’s Muslim Brotherhood.

The US government supposedly cut a deal with the Brotherhood to either occupy or destroy Egypt and so rigged the 2012 elections to put Mohamed Morsi in power. Believers of this conspiracy point to $1.5 billion in annual military aid given by the US to Egypt as proof of the shadowy alliance. There even exists a crazier version which states that the Muslim Brotherhood has already infiltrated the US government, with President Obama also alleged to be a member of the movement.

Was the death of controversial Palestinian leader Yasser Arafat a case of successful assassination? The real cause of Arafat’s death in November 2004, say some, was not a blood disorder or a stroke as claimed by his French physicians but by polonium-210, the substance used to kill former Russian agent Alexander Litvinenko in 2006.

Supporting this theory were findings made by Swiss scientists who confirmed the presence of the substance when they exhumed Arafat’s body in 2012. A subsequent Russian study refuted the Swiss results but was itself criticized for its flawed methods.

Fingers pointed to Israel as the main culprit behind Arafat’s assassination. Although the country has officially denied any role in the Palestinian leader’s death, loaded statements made by former prime ministers Ariel Sharon and Ehud Olmert have helped to fuel the speculation that the country indeed killed him.

3 The Missing Yemenite Children Of Israel

This completely unsettling conspiracy theory holds that the Israeli government kidnapped hundreds or thousands of babies from immigrants who came to the country during its early years. Authorities supposedly usually abducted the children as they were confined in the hospital and then explained to clueless families afterward that they had suddenly died and were given a quick burial. However, they would really put up the abducted children for adoption to wealthy Ashkenazi Jews.

A series of commissions beginning in the 1960s found that while indeed some died and others were given up for adoption, those decisions were made by authorities who had to cope with the general chaos accompanying the mass migrations of that period, rather than by the Israeli government as a matter of policy. Still, those findings have not stopped the affected families from continuing their own search for the truth.

2The Simpsons Revealed A Hidden US Hand Behind The Arab Spring

Did a decade-old Simpsons episode really divulge a US plan to start the upheaval that swept through the Arab world in 2010? For Egyptian TV anchor Rania Badawy, yes it did. According to her analysis, the episode—which aired in 2001 and featured Bart Simpson and his friends as part of a boy band being secretly used by the US Navy for recruitment—contained hidden and not-so-hidden hints of a shadowy US conspiracy.

In particular she cites a scene wherein US warplanes driven by Bart and his friends bombed some militants and their jeep painted with a Syrian opposition flag. According to Badawy, this newly designed rebel flag—which in reality happened to be the country’s old flag, created in 1932—proved the US planned the Arab Spring and the ongoing Syrian Civil War beforehand. Her accusation was met with amusement by Simpsons executive producer Al Jean who sarcastically answered that they “had the amazing foresight to predict conflict in the Middle East.”

1 Israel Has Nukes Pointed At The Arab World (And At Everyone Else, Too)

Just like the former Soviet Union’s infamous Dead Hand operating system, Israel allegedly has its own method of world-ending madness called the Samson Option. Fittingly named after the famous Biblical character, this doctrine would have all of Israel’s nukes shot into every Arab country in the Middle East should it face inevitable annihilation. More insane, the Israelis also allegedly have nukes pointed and ready to fire at several major cities all over the globe.

One Jewish professor justifies the plan, saying that unlike the past 3,000-plus years when the Jews were persecuted while the rest of the world just watched, this time they have the capability to take everyone with them to oblivion. Israeli poet and Holocaust survivor Itamar Yaoz-Kest also hinted at the existence of the Samson Option with the following line of poetry:

“If you force us yet again to descend from the face of the Earth or the depths of the Earth—let the Earth roll toward the Nothingness.”