In 2014, several amazing finds were uncovered in the field of paleontology. Many provide new evidence for long-existing debates, and some are even turning widely accepted ideas on their heads.

10An Ancestor To Lions, Tigers, And Bears 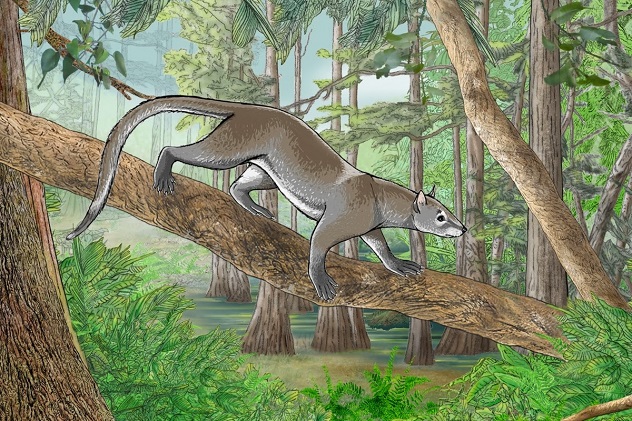 In January 2014, a research team led by Floreal Sole announced the identification of Dormaalocyon latouri, a mammal from the Paleocene-Eocene boundary period 55 million years ago. Scientists had theorized for a long time that the planet’s large carnivores—such as lions, tigers, and bears—shared a relatively recent common ancestor. The Dormaalocyon latouri has brought them one step closer to learning more about that ancestor.

Working from over 250 fossilized teeth, jawbones, and anklebones found in Belgium, they describe the small animal as a “cross between a squirrel and a cougar.” It weighed 450–900 grams (1–2 lb) and probably lived in trees. After evaluating its teeth and jaws, the researchers concluded that it lived off insects and other small animals. While the Dormaalocyon is the most primitive known member of the prehistoric carnivoraforms group (now represented by the family Carnivora), it is not the oldest known. That honor goes to the Uintacyon, which is one million years older. 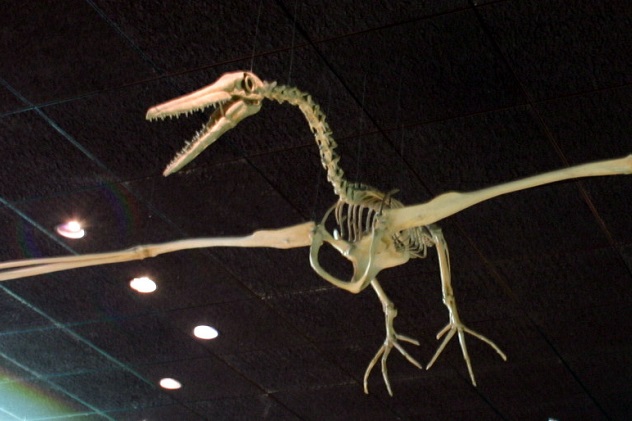 The bones and skull of the Pelagornis sandersi were unearthed by construction workers 31 years ago at Charleston International Airport in South Carolina. The bones were so big that they had to be removed with backhoes. Once the specimen was pieced together, it was evident that the bird would not have been able to fit in an average-size living room due to its enormous wingspan. The specimen was finally identified in July 2014 by scientists who believe it to be the largest flying bird identified so far.

Pelagornis sandersi is believed to have lived 25–28 million years ago. It possesses a wingspan of 6–7 meters (20–24 ft), which is double that of the the largest living flying bird, the royal albatross. The structure of its wings indicates that, also like an albatross, it probably glided long distances without flapping.

These birds belonged to a now-extinct group named Pelagornithidae, who were identifiable by their large size, highly modified wing bones, and toothy, beak-like projections. It was named after Albert Sanders, the retired curator who first collected the fossil. Its remains now rest in the collection at the Charleston Museum, where Sanders used to work.

8A Most Bizarre Pterosaur 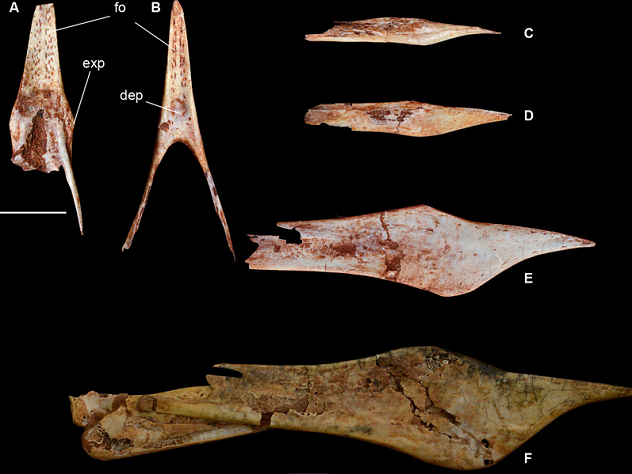 In August 2014, researchers in Brazil announced that they had found a previously unknown species of pterosaur, Caiuajara dobruskii. They unearthed a whopping 47 specimens of a variety of ages from an interdunal lake deposit in a Cretaceous desert. This was an exceptionally unusual achievement, as many pterosaur species have only been identifiable from scattered fragments of fossils and other limited information.

Based on the observations recorded so far, the Caiuajara dobruskii lived in colonies, had a wingspan about 2.4 meters (8 ft) long, and was most likely precocial, meaning that it could fly at a very young age. Its most striking feature, however, is the bone crest on its head. Instead of the famous fluted crest that most pterosaurs are known for, Caiuajara dobruskii sports an extremely large, triangular crest that makes it look like some kind of demonic toucan from hell. Rounded depressions in the outer surface of the jaw complete the unique look that makes Caiuajara dobruskii stand out from its peers.

7One Of The World’s First Known Predators 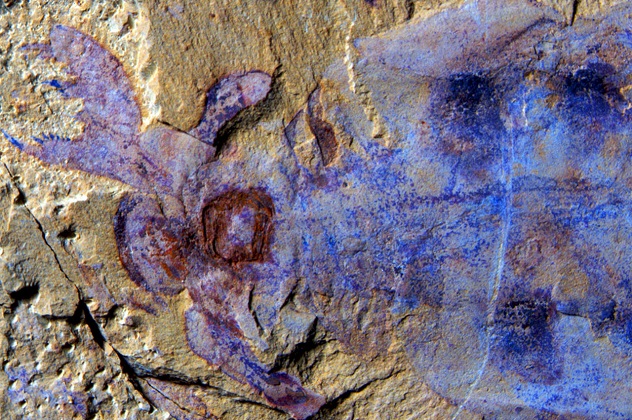 The further back in time you go, the more animals begin to resemble Lovecraftian horrors. This is certainly true of Lyrarapax unguispinus, Latin for “spiny-clawed, lyre-shaped predator.” It lived around modern-day southwest China in the Cambrian period, 521 million years ago.

Its fossil was unearthed in 2013 (papers published in 2014) near Kunming in the Chinese province of Yunnan. Like many predators of the period, it looks like a cross between a lobster and a worm, with strong appendages for swimming and large claws for grasping and tearing prey. It belongs to the family Anomalocarididae, a group of similar creatures that roamed the Cambrian seas, and grew to be about 10–13 centimeters (4–5 in).

What makes Lyrarapax unguispinus special is that, unlike other Anomalocarididae fossils, it’s remarkably complete and revealing. Its fossil shows traces of muscle structure, the digestive tract, and even the brain. This helps scientists immensely, who have been debating the place of Anomalocarididaes on the tree of life since they were first identified in the 1980s. Based on brain structure and other factors, scientists now believe that they are related to the ancestors of onychophorans, or velvet worms.

6A New Herbivore That May Indicate That All Dinosaurs Were Feathered 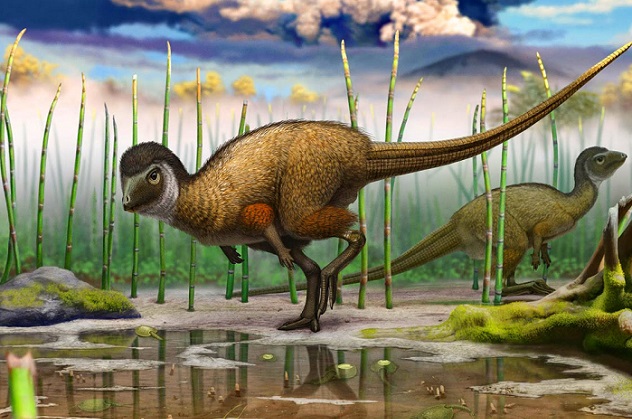 Until July 2014, scientists believed that only carnivorous dinosaurs had feathers, but a study describing a newly identified plant-eating dinosaur named Kulindadromeus zabaikalicus changed everything. The herbivore lived in the Jurassic era between 169–144 million years ago in what is now Siberia, where six skulls and hundreds of incomplete skeleton fossils were unearthed. It stood at about 90–110 centimeters (3–3.5 ft) on its hind legs, had small forelimbs, and possessed a small beak-shaped snout with teeth adapted for eating plants.

What makes this little creature such an important find is that it is the first herbivorous dinosaur species to be proven to have feathers. Other plant-eating dinosaurs, especially ornithischian (“bird-hipped”) species, have been known to have simple bristles. Kulindadromeus zabaikalicus possessed bristles on its head and back and complex feathers on its limbs in addition to scales on its shins and tail. The authors of the study concluded that feathers were likely common among all dinosaurs, even in early species, and probably appeared during the Triassic period around 220 million years ago. 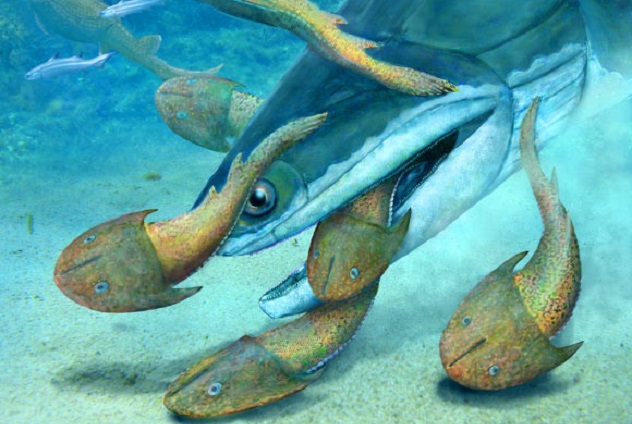 The Silurian period (which came after the Ordovician period in the Paleozoic era, beginning about 443 million years ago and lasting about 26 million years) was the time during which plants began making their way to land. Sea scorpions were the dominant predator, and fish were just coming on the scene, developing bones and jaws by the end of the era. Fish of the period were thought to be small, not claiming a significant place in the ecological hierarchy until the following eras.

New research is challenging that notion, mostly concerning the Megamastax amblyodus, now the largest known vertebrate fish in the Silurian fossil record. It grew to around 1 meter (3 ft) long with jaws measuring 10–13 centimeters (6–7 in) and used its mighty teeth to crunch through the shells of its prey. It’s this gaping maw from which it derives its name, which means “big mouth, blunt teeth.”

The fossil remains were unearthed at the Silurian Kuanti Formation of Yunnan, China by a team of researchers led by Dr. Brian Choo. The breakthrough is important in at least two ways: It leads scientists to believe that large fish evolved earlier than previously thought, and since larger fish need more oxygen, some scientists are beginning to question previous findings that indicated low levels of oxygen in the atmosphere during the period. 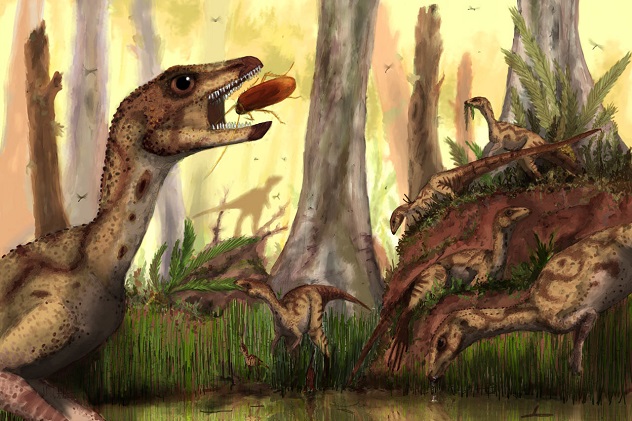 One of the problems with studying dinosaur evolution is the preponderance of saurischians (“hip-jointed” dinosaurs, including herbivores like Diplodocus and carnivores such as Tyrannosaurus) in the fossil record and the relatively small number of ornithischians (“bird-hipped” dinosaurs). This makes it difficult to assess their significance among dinosaurs as a whole.

A breakthrough by paleontologists from Switzerland and the UK promises to shine a little more light on the subject. At least four individual fossils of the species Laquintasaura venezuelae were unearthed along the La Quinta Formation of the Venezuelan Andes, making it the first dinosaur ever to be found in the northern regions of South America. The small ornithischian dinosaur lived during the early Jurassic period about 200 million years ago, walked on its hind legs with its tail in the air, and measured about 90–110 centimeters long. It ate plants and possibly insects and other small animals, which it gripped in its small forelimbs.

Laquintasaura venezuelae also traveled in small herds, a behavior thought to be very unusual for dinosaurs of that time until now. This information gives researchers new insight into the evolution of social behavior in dinosaurs, and its northern South America origins expands their known geographical distribution. 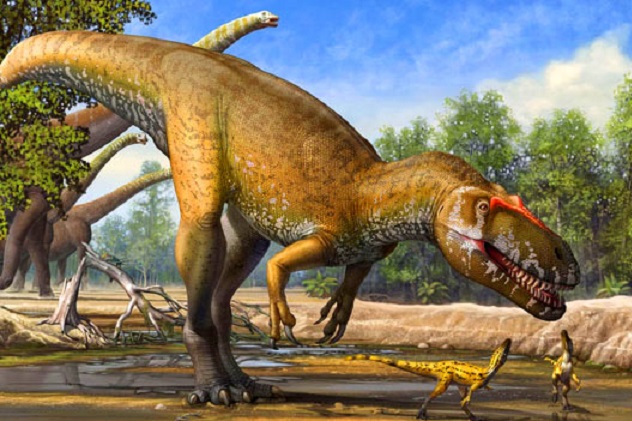 A PhD student at the New University of Lisbon in Portugal named Christophe Hendrickx was working on what he believed to be the fossil remains of Torvosaurus tanneri, a dinosaur that looks similar to the Tyrannosaurus, when he realized that deviations in the bones indicated that he had a new species of megalosaur on his hands. Torvosaurus gurneyi, named after paleo-illustrator James Gurney of Dinotopia fame, measured 10 meters (33 ft) and possessed teeth 10 centimeters (4 in) long. It is also thought to possess a light covering of fuzz or bristles, precursors to feathers.

While several dino-predators were larger, Torvosaurus gurneyi was the largest known predatory dinosaur to roam Europe, having lived in what is now the Iberian Peninsula around 150 million years ago. Because of its relation to the North American Torvosaurus tanneri, its existence provides additional support to theories that temporary connections between that continent and Europe during the late Jurassic facilitated the flow of flora and fauna both ways.

In 2012, Hendrickx and some colleagues had located a dinosaur clutch containing several crushed eggs and actual embryos belonging to a Torvosaurus. He now believes that these embryos are also that of Torvosaurus gurneyi. 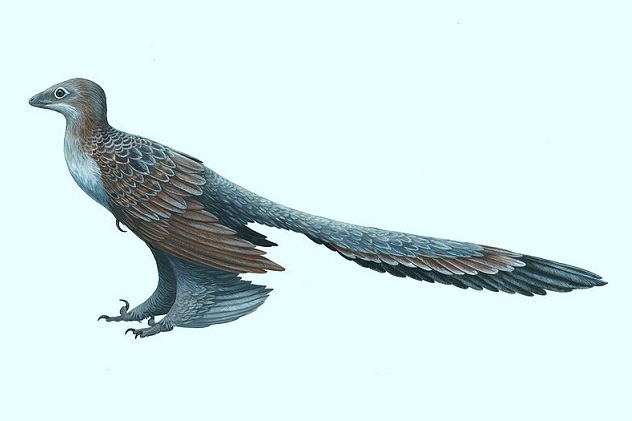 In July 2014, a team of American, Chinese, and South African paleontologists announced the identification of a new Microraptoria, which is a group of predatory, four-winged raptors. Changyuraptor yangi, whose fossil was discovered in the Liaoning Province of northeastern China, lived about 125 million years ago in the Cretaceous period.

Changyuraptor yangi is exceptional in almost every way for a dinosaur of its kind, which makes it extremely valuable to scientists looking to study how flight evolved. At 122–137 centimeters (4–4.5 ft), it was the biggest four-winged dinosaur ever identified. Its entire body was covered in feathers, and its tail feathers grew up to a full 30 centimeters (12 in) long, making them the longest tail feathers of any feathered dinosaurs. These features have led some scientists to believe that at least some microraptorines could fly. The additional feathers on the hind limbs would have made control easier for larger flyers. 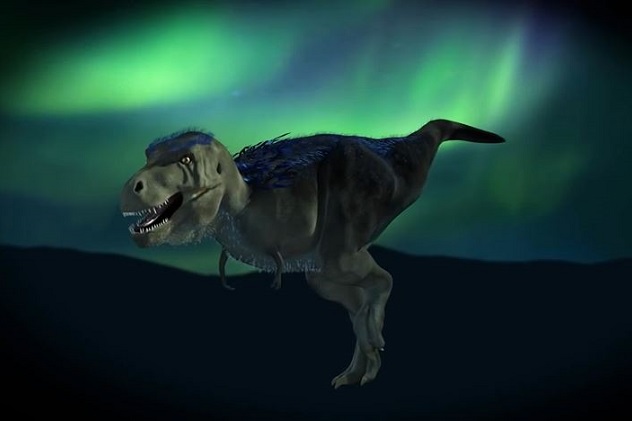 With an adult skull length of 63 centimeters (25 in) and standing at slightly more than half the height of Tyrannosaurus, a newly identified cousin of the iconic species called Nanuqsaurus hoglundi was quickly dubbed the “Pygmy Tyrannosaurus” by the press. It was discovered in the Prince Creek Formations on the North Slope of Alaska by paleontologists in 2006, but until 2014, scientists thought that the fragments of fossil remains belonged to one of the known species of tyrannosaurid dinosaurs from North America or Asia.

Nanuqsaurus hoglundi lived about 70 million years ago in the northern region of a then-island continent called Laramidia. Today, the area is one of the most remote in the world—many of the rocks that the researchers investigated had to be transported by helicopter. Since they were working on another new breakthrough, a horned dinosaur called Pachyrhinosaurus perotorum, they didn’t immediately realize that they had a new species of tyrannosaur. The dinosaurs lived in an environment similar to modern-day Alaska, consisting of extremes of day and night. This may explain the evolutionary pressures that resulted in its smaller size.

Lance LeClaire is a freelance artist and writer. He writes on subjects ranging from science and skepticism to religious history and issues to unexplained mysteries and historical oddities, among others. You can look him up on Facebook or keep an eye for his articles on Listverse.