Feminism is the belief that women and men should have the same rights and opportunities. But beyond that simple definition is a complex movement whose nature and goals have changed significantly over time. Famous feminists have done everything from fight for women’s suffrage to try banning books that they deem sexist. This list is devoted to self-described feminists whose baffling pet projects range from controversial to murderous. 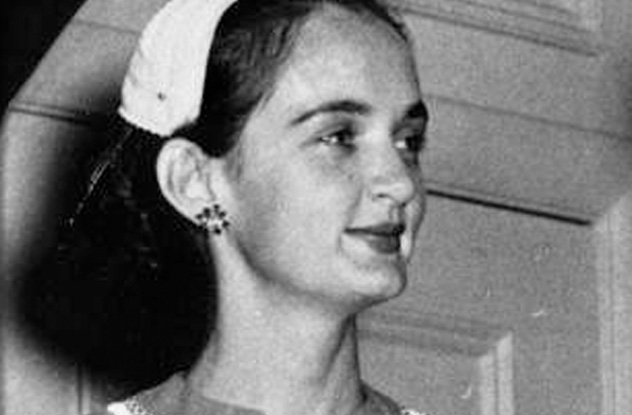 Feminist Roxcy Bolton doesn’t like hurricanes. Her opposition results not so much from the destruction they cause but from the word itself.

Instead, she wanted to rename hurricanes to “him-icanes.” The National Weather Service rejected her proposal. Maybe she’ll go after herpes next.

Roxcy was, however, successful in getting the National Weather Service to alternate the names of hurricanes between male and female names starting in 1979. Before Roxcy took her stand, all hurricanes received female names. 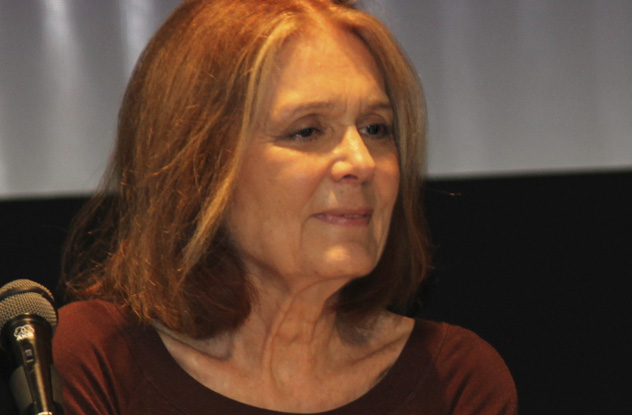 Gloria Steinem advocated feminism for decades, received the Presidential Medal of Freedom, and even had ties to the CIA. As a self-proclaimed “radical feminist,” she’s also led a handful of questionable campaigns.

Steinem once claimed that strength tests for firefighters were sexist. When asked about what would occur if her new band of weak firefighters ever needed to carry someone out of a burning building, she said it would be better for firefighters to just drag people out of a fire on the ground because “there’s less smoke down there.”

Her campaign against depictions of violence also extends to the written word. One book Gloria took particular ire with was Bret Easton Ellis’s American Psycho. She disapproved of the violence against women committed by the book’s narrator and supported a boycott against the publisher. According to her, the book’s author was responsible for subsequent actual murders of women due to his book’s influence. (The book portrayed its narrator as unsympathetic and even unreliable in his narration, he murdered both women and men, and he was labeled as a “psycho” by the book’s very title.)

American Psycho aroused quite a reaction among feminists. To protest the book, one activist named Tara Baxter even barged into bookstores in Santa Cruz, California and poured blood onto every copy of American Psycho she could find. Baxter said she wanted to see the book’s author “skinned alive, a rat put up his rectum, and his genitals cut off and fried in a frying pan.” 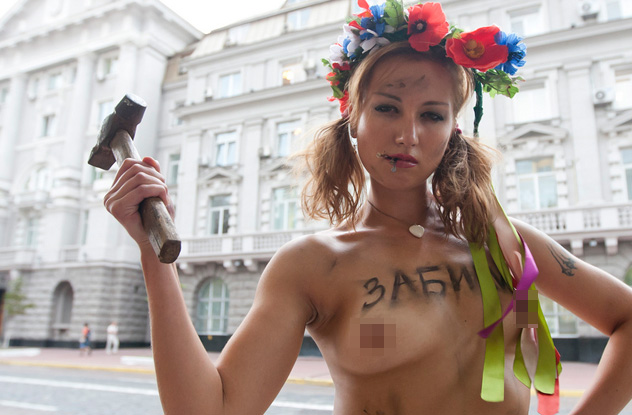 Activists in the feminist group FEMEN strip off their tops and march through the streets in protest. These protests rarely have anything to do with toplessness, such as protesting laws against nudity or breastfeeding, but rather voice the women’s displeasure against everything from Islamism to Vladimir Putin. As they protest, FEMEN protesters bear slogans on their exposed breasts and stomachs, such as “ Your Morals” and “Topless Jihad.” Whether the demonstrations actually accomplish anything is a matter of debate, but they certainly arouse quite a reaction from riot police around Europe, who have arrested the topless protesters on many occasions.

In May 2013, FEMEN stormed into a Barbie “Dreamhouse Experience” exhibition with “LIFE IN PLASTIC IS NOT FANTASTIC” scrawled across their exposed breasts, burning a cross bearing a Barbie doll. They also claimed that Barbie manufacturer Mattel has a “Nazi ideology.”

FEMEN’s other public protests have included publicly urinating on pictures of Ukraine’s president outside of a Ukrainian embassy (while, again, topless). They employed similar shock tactics in bleeding and defecting on the Islamic State flag. On another occasion, they gathered in Vatican Square to shove crucifixes into their anuses in public view and on video to protest the papacy and religion in general.

In addition to being arrested for their demonstrations, FEMEN protesters received a $1,500 fine for exposing themselves in a German church during a Christmas Day Mass with “I AM GOD” written across their bare breasts and torsos. The Church officials claimed that the altar boys in the church were “traumatized.”

FEMEN was founded by a man named Victor Svyatski. Svytaski chose the women he’d most like to see topless, and in the name of feminism, they strip down and bare all. 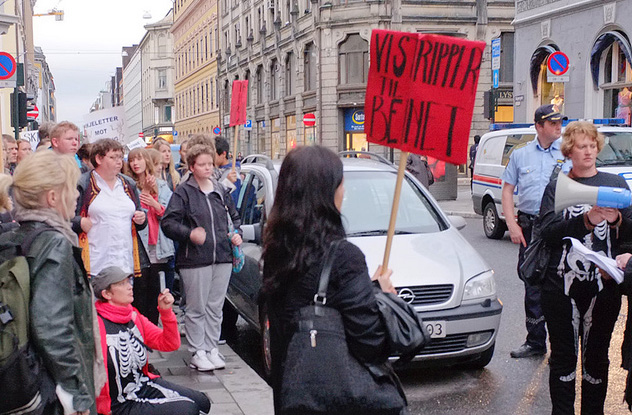 Feminists in Iceland felt that strip clubs were degrading to women, if not exploitative. So in 2010, they successfully pushed for a law banning all strip clubs in the country. You might think that any form of birth control, particularly one that places responsibility on men rather than just women, would be hailed by feminists everywhere. But when the reliable and clean rubber condom arrived in the late 19th century, it saw widespread resistance, even from feminists.

Thirty US states passed laws banning the manufacture and sale of condoms. While some of those opposed to condoms were the usual puritanical moralists who disliked sex outside procreation, many of those opposed were feminists. They didn’t want a method of birth control to exist that relied upon men.

Other suffrage leaders opposed the condom because they thought it would make it easier for men to cheat on their wives or go to brothels. 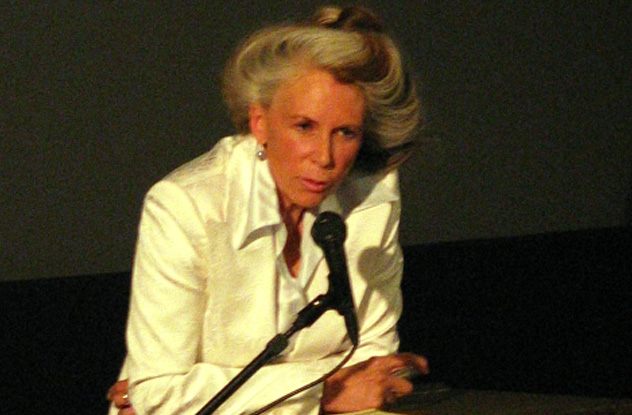 Her anti-porn law was passed twice by the Minneapolis city council. Both times, it was vetoed by Minneapolis’s mayor. A similar ordinance became law in Indianapolis but was later be ruled unconstitutional by the courts. 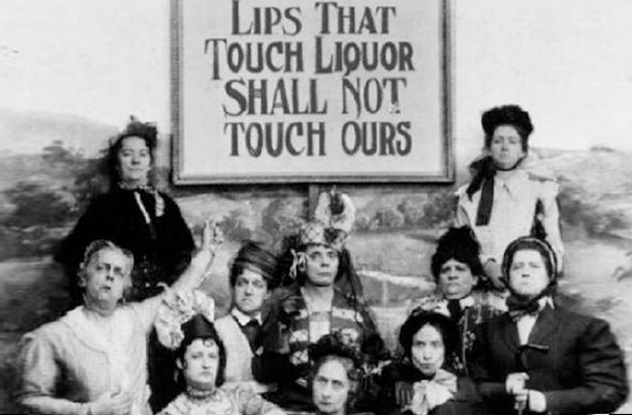 Many first-wave feminists fighting for women’s right to vote were also aligned with the Temperance movement, which pushed alcohol prohibition. Feminists at the time believed banning alcohol would improve the lives of women by keeping men sober, consequently making their careers more stable and tampering down domestic violence.

One of the most influential suffragists, Susan B. Anthony, divided her time between the suffrage movement and the temperance movement. Anthony—along with other prominent suffragists, including Elizabeth Cady Stanton—organized the Women’s State Temperance Society. The related Women’s Christian Temperance Society blamed alcohol for nearly every ill society faced and even believed that drinking alcohol would disfigure your future grandchildren and cause you to spontaneously combust.

The Prohibition party became the first major political party at the time to endorse women’s suffrage. The Ku Klux Klan even endorsed women’s suffrage in the belief that granting women the right to vote would further their larger goal of prohibition.

The Liquor Dealer’s League organized against suffrage, fearing that granting women the right to vote would result in the prohibition of alcohol. The League implored liquor manufacturers and saloons around the country to oppose women’s suffrage ballot initiatives, claiming: “It is in your interest and ours to vote against this amendment.”

The Women’s Christian Temperance Union still exists to this day, but it devotes much of its time to advocating a different prohibition: the prohibition of marijuana. In the pantheon of feminist extremists, Andrea Dworkin stood in a league of her own. Best known for her failed crusade alongside Catharine Mackinnon to ban pornography in America, Dworkin would seemingly ban all sex if she had her way.

Although Dworkin has disputed the quote often attributed to her that “all heterosexual sex is rape,” Dworkin has expressed her contempt for sex elsewhere. In her 1987 screed Intercourse, Dworkin claimed that “Intercourse is the pure, sterile, formal expression of men’s contempt for women.”

Oddly enough, while Dworkin has expressed disapproval for most heterosexual sex between two partners, she has endorsed incest. Dworkin wrote, “The destruction of the incest taboo is essential to the development of cooperative human community based on the free flow of natural androgynous eroticism.”

But if you think Dworkin’s fondness for incest means she’s the family type, think again. She’s expressed an antipathy for male offspring, claiming, “Under patriarchy, every woman’s son is her betrayer and also the inevitable rapist or exploiter of another woman.”

2Opposition To The Speed Of Light French feminist Luce Irigaray calls a “sexed equation.” She claims that it is sexist because “privileges the speed of light over other speeds that are vitally necessary to us.” Irigaray thinks its sexist for the formula to “privilege that which goes faster.”

Irigaray believes that all of physics is sexist. She sees a massive male conspiracy in physics that has made fluid mechanics, which she associates with the feminine, less developed than solid mechanics. She thinks male physicists are deliberately not studying fluid mechanics because men’s bodies don’t have a particular fluid in them: menstrual fluid.

Since 1964, she has been employed as a researcher at the French National Centre for Scientific Research and is currently France’s director of research in philosophy.

1The Society For Cutting Up Men (SCUM) To fix society’s problems, she proposed the extermination of all men on Earth and the creation of an entirely female society. The SCUM Manifesto’s principal aim was to get women around the world to “overthrow the government, eliminate the money system, institute complete automation, and destroy the male sex.”

Feminist Roxanne Dunbar read the work and formed the militant feminist organization Cell 16, which grew in ranks after she placed an ad in an underground newspaper recruiting for a “Female Liberation Front.” Cell 16 gave its members vigorous self-defense training and advocated unflinching chastity. Members thought that sex was inherently unnatural and sought to eliminate sex altogether in their new all-female society.

Solanas, on the other hand, gave up recruiting for her own vision of an all-female society. Instead, she took her male extermination plan into her own hands and bought a .32 automatic pistol, with its sights set on Andy Warhol.

On June 3, 1968, Solanas showed up to Warhol’s art studio, opening fire on the artist and his friend Mario Amaya. Warhol suffered extensive injuries from the shooting, narrowly avoiding death. Doctors had to perform open-heart surgery on Warhol, who remained debilitated by the attack for the rest of his life.

Following her arrest, Solanas represented herself at her trial and told the presiding judge, “I have nothing to regret!” After the remarks in court, the judge had her admitted to Bellevue Hospital for psychiatric observation. Following this evaluation, Solanas was diagnosed with paranoid schizophrenia.

Sentenced to three years for the near-murder, Solanas devoted herself to her feminist cause in prison. She also maintained her unflinching hatred of Andy Warhol. Asked about almost killing the man, Solanas replied, “I consider that a moral act. And I consider it immoral that I missed. I should have done target practice.”

Post-release, Solanas was arrested for stalking Warhol in 1971. She spent the rest of her life drifting in and out of mental institutions around New York City until she died of pneumonia in 1988 at the age of 52.