Many species have lived and died out since life began on Earth. More and more new, extinct animals of all kinds are being described, helping to shape our understanding of Earth’s past. Sometimes, a new find even contradicts current theories, calling many scientific papers (with many prominent names attached to them) into question. Here are 10 recent paleontological finds. 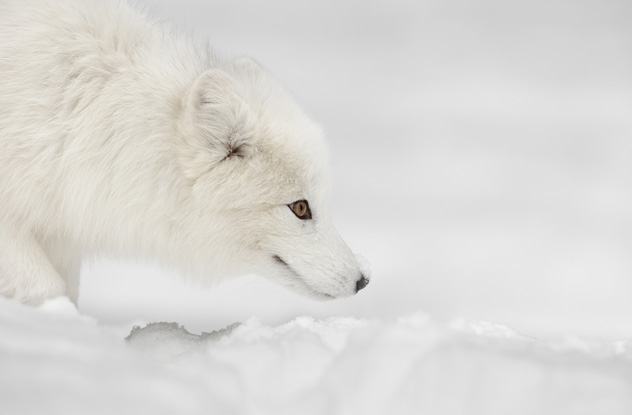 Some of the most interesting (or headache-causing) scientific findings are those that challenge an established paradigm, such as the description of a new, extinct species that casts doubt on established evolutionary models. Such is the case for Vulpes qiuzhudingi, an extinct species of fox, which was first described in 2014. A very dedicated team of paleontologists found the fossils in the Zanda and Kunlun Pass Basins in southern Tibet at roughly 4,700 meters (15,000 ft) above sea level. It’s difficult to breathe at this elevation, and water freezes in camp overnight.

The V. qiuzhudingi remains that were found, namely teeth and several jawbones, resembled those of the modern Arctic fox (Vulpes lagopus). The fossils, 3.6–5.1 million years old, were optimized for an extremely carnivorous diet, which is typical in cold environments. Polar bears, wolves, and Arctic foxes eat mostly meat, whereas most other modern foxes are more omnivorous.

Modern Arctic foxes are generally believed to have evolved in Europe during an ice age roughly 2.6 million years ago. The V. qiuzhudingi bones, however, lend support to the “Out of Tibet” hypothesis, which states that various cold-adapted megafauna, such as woolly mammoths, trace their evolutionary origins back to Tibet’s harsh, cold climates. Others speculate that V. qiuzhudingi’s features may simply be coincidental adaptations and do not indicate it as the ancestor of modern Arctic foxes.

Newly described extinct species are generally dug up from the ground via processes that constitute the common image of paleontology. Sometimes, however, a new species hangs on a wall for decades.

The Doncaster Museum and Art Gallery in Doncaster, England, featured among its collection a plaster model of a fossilized ichthyosaur. This supposed model was found in 2008 to be an actual animal preserved in rock. On top of that, it was a species that had never been described before. No one knows how the 1.5-meter (5 ft) reptile was mistaken for a plaster model; it’s believed to have been dug up sometime in the early 1980s.

The fossils of this new species, Ichthyosaurus anninage, are 189–192 million years old and comprise the most complete early Jurassic ichthyosaur ever found. The fossils are so well preserved that it was possible for scientists to determine the animal’s last meal, which was squid, from fossilized tentacle hooks embedded in the rock.

Llallawavis scagliai, also known as Scaglia’s Magnificent Bird (SMB), is a new species of phorusrhacid, more commonly known as a terror bird. Terror birds were large, flightless birds that once lived in South America and killed prey with their massive beaks. Unlike other birds, the bones in a terror bird’s skill are generally fused, which aids in striking prey to death.

Unearthed in 2010, the new species of terror bird stood about 1.2 meters (4 ft) tall and weighed around 18 kilograms (40 lb). (Some terror bird species stood up to 3 meters [10 ft] tall.) The SMB’s fossilized skeleton was around 3.5 million years old and is the most complete terror bird ever found, with over 90 percent of the bones present.

The preservation of certain bones, such as the auditory and eye-focusing bones, has granted scientists a never-before-seen look at the sensory capabilities of terror birds. SMBs possessed a surprisingly narrow range of hearing, geared toward lower-frequency sounds from 380–4,230 Hz. However, larger animals tend to produce and hear lower sounds more, so it may not be too surprising. Low-frequency sounds tend to travel far, so this hearing range may hold implications for how terror birds tracked their prey.

7The Porpoise With A Huge Chin

In 1990, paleontologists found a rather unique-looking fossilized porpoise skull in rocks ranging from 1.6–5 million years old. The new species, known as a skimmer porpoise (Semirostrum ceruttii), possessed a skull featuring a lower jaw that was much longer than the upper jaw. Specifically, its mandibular symphysis, which is comparable to a human’s chin, was 85 centimeters (33 in) long. The mandibular symphyses of modern porpoises are usually around 1.5 centimeters (0.6 in) long.

The function of such a pronounced chin became apparent more recently, when CT scans of the lower jaw revealed new details. The nearly toothless mandible was highly innervated and contained sensory structures similar to black skimmers (a seabird) and half-beaks (a small fish). Both black skimmers and half-beaks use their lower jaws to feel for and detect food in low-light conditions. Skimmer porpoises are the first mammalian species ever documented to have similar sensory abilities. Additionally, the animal’s optic canals were smaller than modern porpoises, suggesting poor eyesight. The skimmer porpoise likely relied on its big, sensory chin and echolocation to hunt prey. 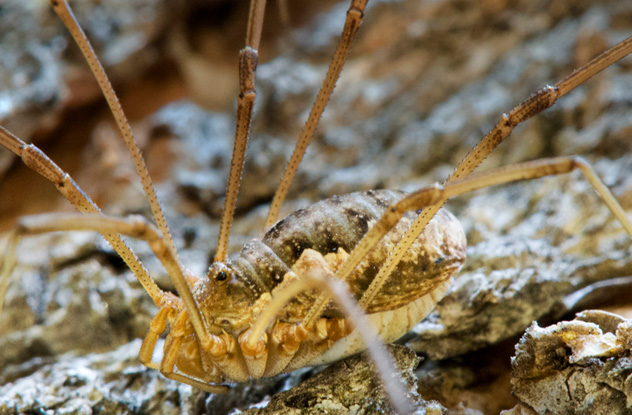 Harvestmen, sometimes referred to as “daddy longlegs,” are a highly successful group of arachnids that have been found on every continent except Antarctica. You might expect these long-legged “spiders” to have many eyes, but harvestmen are not spiders. They are more closely related to scorpions and have only two eyes.

Harvestmen exoskeletons don’t tend to fossilize well, so the uncovering of a 305-million-year-old specimen in France was cause enough for celebration. The surprisingly well-preserved fossil was X-rayed, revealing something unexpected: four eyes. In addition to a pair of medial eyes at the front of the body like modern harvestmen, this species, Hastocularis argus, possessed a pair of lateral eyes, one on each side of the body.

A large bed of bones, containing the fossilized remains of several hundred animals, has been unearthed in southern Portugal. The area was once a 220-million-year-old lake, which may have dried up. The primary inhabitants of the lake were a new species of gigantic salamander, Metoposaurus algarvensis. These amphibians were top predators and occupied an ecological niche similar to crocodiles. They grew to 2 meters (6.6 ft) long and weighed 100 kilograms (220 lb). The largest modern salamanders grow to about 1 meter (3.3 ft), and most are much smaller.

M. algarvensis has been described as looking like “something out of a bad monster movie.” Their toilet seat–shaped heads contained hundreds of teeth of varying size; some were more comparable to tusks than teeth. If their lake did dry up, it may have killed the salamanders, as they could likely barely support their weight on land.

While giant, predatory salamanders have been found in modern-day North America, Africa, India, and other parts of Europe, algarvensis is the first species found in Portugal. (Note that when these salamanders lived, all of Earth’s continents were merged as the supercontinent Pangea.) Unique features of algarvensis’s skull and jaws confirm it to be a distinct species. So far, only 4 square meters (43 ft2) of the lake bed have been excavated; much more remains to be uncovered. 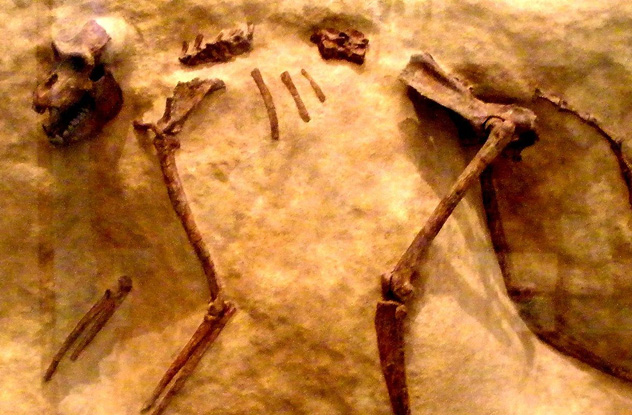 Over a series of several expeditions into the Amazon jungle in Peru during the early 2010s, a few fossilized molars were found. The nature of the Peruvian Amazon makes fossil-hunting difficult, as it’s only feasible during dry seasons. Water levels are too high during the rest of the year, hence the multiple expeditions.

This similarity is significant, as it provides evidence for New World monkeys having Old World–monkey ancestry. While most scientists believe in such a lineage, how Old World monkeys made it to South America, which has been geographically isolated from Africa for 65 million years, remains a mystery. The description of P. ucayalensis doesn’t solve that mystery, but it does show that the monkeys made it to the New World at least 10 million years earlier than scientists thought.

Today, emperor penguins are the largest penguins, standing around 1.1 meters (3.6 ft) tall and weighing 46 kilograms (101 lb). Larger penguins have been known to exist in the past, and recently, fossils of the largest penguin ever documented were unearthed on Seymour Island, which is off of the Antarctic Peninsula. The species was named Palaeeudyptes klekowskii, also referred to as a colossus penguin.

This bird measured over 2 meters (6.6 ft) long from beak to tail and weighed 115 kilograms (254 lb). The roughly man-sized penguin may have stood 1.6 meters (5.2 ft) tall, although it’s difficult to say for sure, as extinct giant penguins were proportioned differently than modern penguins. Larger penguins are capable of diving deeper underwater and staying down longer than smaller ones, and P. klekowskii is estimated to have been able to dive and hunt for roughly 40 minutes.

P. klekowskii lived 37–40 million years ago. At that time, Seymour Island was warmer than it is today, with a climate more comparable to Tierra del Fuego, a group of islands at the southern end of South America. It was a good era for penguins; thousands of penguin bones from 10–14 species have been unearthed on the island.

Sea life looked different hundreds of millions of years ago. One group that particularly highlights that statement is a group of arthropods called anomalocaridids. (They practically have the word “anomaly” in their names.) These predatory arthropods had grasping appendages attached to their heads, which grabbed prey and moved it into a circular mouth filled with plate-like teeth. Their bodies were long and segmented, with flaps on each segment for swimming.

An extremely well-preserved anomalocaridid found in Morocco is shedding new light on the 520-million-year-old arthropod group. Aegirocassis benmoulae grew to at least 2.1 meters (7 ft) long, making it one of the largest arthropods to have ever lived and one of the largest animals alive at its time. At 480 million years old, A. benmoulae was likely one of the last anomalocaridids, and it was quite unique. Its head appendages were covered in spines, which were used for filter-feeding, as opposed to active hunting. This marks the earliest-known instance of free-swimming filter feeder gigantism; A. benmoulae was the baleen whale of the anomalocaridid group. Also, the new species possessed pairs of swimming flaps on its body segments, something never before documented.

That last feature is of special interest due to its implications for arthropod evolution. The pair of flaps represents an evolutionary precursor to the double-branched limb, a feature common on modern arthropods. Reexamination of other anomalocaridid species has since revealed that they, too, had a pair of flaps on the side of each segment. This has cleared up questions about where the group belongs in the arthropod evolutionary tree.

https://www.youtube.com/watch?v=iL110VK69fQ
A surprising find has been made in Chatham County, North Carolina. Parts of the skull, parts of the spine, and the upper forelimb from a new species of crocodylomorph were found in the roughly 230-million-year-old sediments of the Pekin Formation. (As you might guess, a crocodylomorph resembles a crocodile.) This croc was dubbed Carnufex carolinensis, also known as the Carolina butcher.

Based on projections made from the bones of similar species, the Carolina butcher was 2.7 meters (9 ft) long, making it one of the largest and earliest crocodylomorphs in paleontological history. The butcher looked like a cross between a crocodile and a therapod dinosaur. The primarily land-dwelling biped preyed on other armored reptiles and early mammal ancestors. (Scientists have made no statements regarding whether it would have been able to open doors or fight Batman.)

Documentation of the Carolina butcher indicates that crocodile-like creatures were filling top-predator niches in North America during the late Triassic, something not previously known. Large crocodylomorphs, along with other large predators, went extinct as the Triassic Period ended. Only small therapods and crocodylomorphs, the latter of which are the ancestors of modern crocodiles, survived. As therapods began to rise to dominance, the small crocodylomorphs initially filled ecological roles similar to foxes or jackals today.

Anthony is an editor at Listverse.