Self-driving cars, selfie sticks, drones, touchscreen devices, e-cigarettes, jetpacks, and many other things seem like fairly modern inventions. Indeed, most of their “inventors” list them as newly invented and even go as far as seeking patents. But the fact is, many of these “inventions” have already been in existence for quite some time. They may have earlier lookalikes that ended up not going into production or that went into limited production due to one reason or another. Some also made it into full production but were recalled due to poor sales. 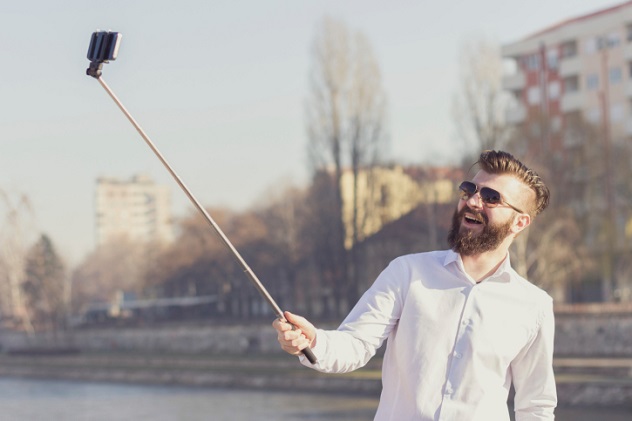 The first selfie stick was invented long before the first handheld mobile device was made. This 1925 photograph, for instance, may show a couple taking a photograph with a camera attached to a stick. However, a selfie stick was definitely invented by the Japanese man Hiroshi Ueda in the 1980s. A photographer and worker at the Minolta camera company, Hiroshi made the selfie stick because he and his wife were unable to take pictures of themselves during a trip to Europe. (When he asked a boy to take pictures of them, the boy ran off with the camera.)

Frustrated, he invented something that would allow him take a picture of himself: He called it the “extender stick.” Since the iPhone really hadn’t been invented yet, a small camera was to be attached to one end of the stick. It also had a small mirror in its front so that users could see how they would look in the photograph. He patented the “extender stick” in 1983. The product was mass produced for sale but it was a commercial failure. The quality of the pictures was low. Besides, previous research showed that the women back then were embarrassed by the idea of taking pictures of themselves. The selfie stick was then reinvented by Wayne Fromm in the year 2000, three years before Hiroshi’s patent expired. Fromm called his the “quik pod.” He believes he is the inventor of today’s selfie sticks and has even sued several other selfie stick producers. When asked about Hiroshi’s selfie sticks, he said they were “prior art.” 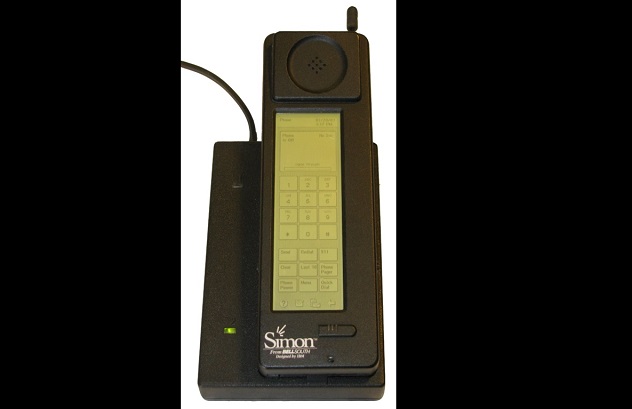 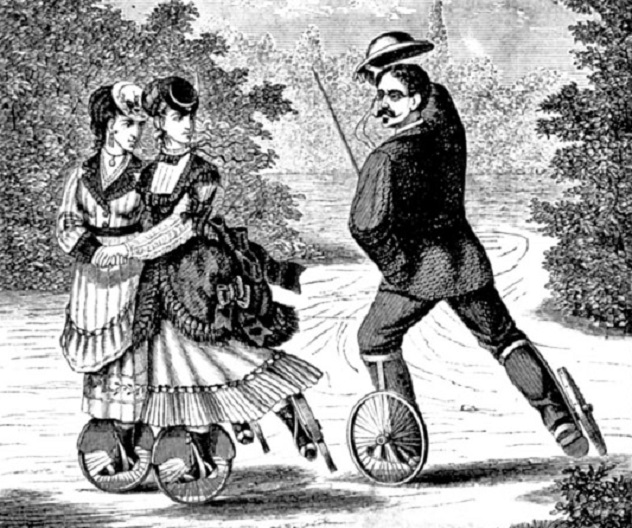 Wheel skates look somewhat like regular inline skates, except that the wheels are much larger, up to the size of bicycle tires. They are seen as a cross between an inline skate, a ski, and a bike. Recently, a company called Chariot Skates said they had come up with something unique—the Chariot wheel skates. According to the company, wheel skates are “revolutionary new skating product[s].” Revolutionary? They do at least revolve. New? No. The first wheel skate was made more than 142 years ago.

It even featured in the March 19, 1870, issue of Scientific American magazine. Made by Thomas Luders from Olney, Illinois, and called a “pedespeed,” the wheels then were much smaller, measuring around 36 centimeters (15 in) in diameter. Luders also said the skates could be used by anybody, irrespective of their physique. He himself was a large, heavy man, and he claimed he could use them for two straight hours without getting tired. Another version of wheel skates, appearing in 1923, had its tires on the inside of the foot rather than outside. (Other than the size of the wheels, the main improvement made by Chariot Skates is the small tire at the back of the bigger tire for increased stability.) 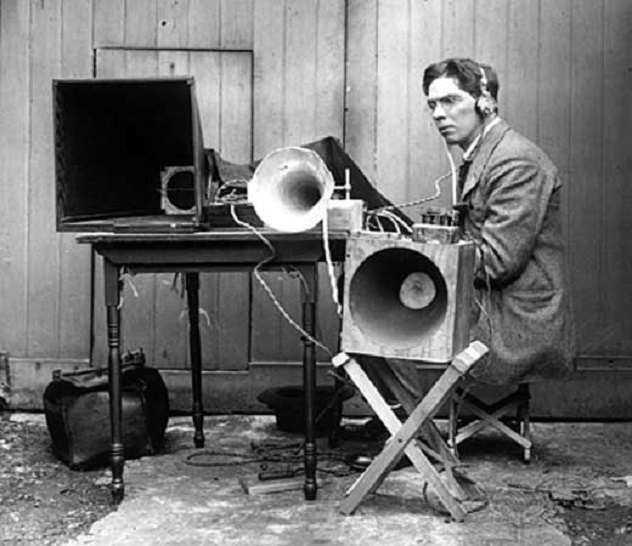 The first drone can be traced back to 1916 when British inventor Archibald Low (shown above) designed and flew the first unmanned radio-controlled vehicle. The drone was made to counterattack German Zeppelin airships, and it also carried out ground attacks during World War I. It was made with wood and tin, its wings taken from the lower wing of another biplane. Overall, the drone was somewhat unsuccessful because the noise from its engine interfered with its radio. The Sopwith Aircraft Company also tried making a drone in 1916. They placed the radio equipment at the tail so that the engine would not interfere with its signal, but their drone never flew as it was damaged in an accident on the ground. Low would try flying his drone again in 1917 when he flew it in front of some senior military officers. It was launched from the back of a lorry and flew for some time before crashing due to engine failure, almost killing the military officers present.

In 2012, Google introduced Google Glass (at right in the photo above), a computer you can wear on your face. Someone wearing the glasses can be walking down the street or doing any everyday task while simultaneously seeing an overlay of calendar appointments, messages, and subway alerts. They can make video calls and even upload live videos to the Internet while on the move, without ever needing to use their hands. Google Glass might be cool, it might be new, it might be revolutionary, but it’s definitely not the first pair of wearable computer glasses.

The first wearable computer glasses were made by Edward Thorp and Claude Shannon in 1961. In 1968, Ivan Sutherland made the “Sword of Damocles.” It was the first head-mounted computer display and an early variant of all wearable computer glasses we have today. In 1980, Steve Mann, known today as the father of wearable computing, made the “WearComp” (at left in the photo above), a pair of tech-enhanced glasses that was capable of communicating wirelessly with other computers and could share videos. He continued to work on the glasses over the years, and by 1999, he had come up with a pair of glasses that looked like Google Glass, or rather, that Google Glass looks like. He called it the “EyeTap.” 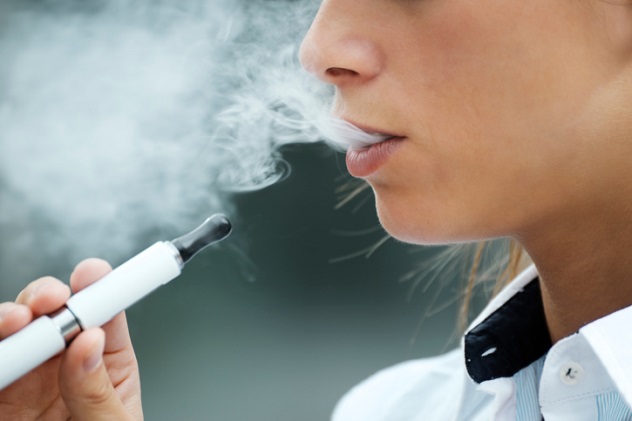 E-cigarettes first started becoming popular in 2012. They work by heating a nicotine fluid to mimic a real cigarette. Their invention is usually credited to Chinese pharmacist Hon Lik, who reportedly created it after he dreamed that he was drowning in a cloud of vapor. His father had died of lung cancer caused by cigarettes. He himself was an unrepentant smoker who had unsuccessfully tried quitting by using a nicotine patch.

The fact is, Hon Lik is not the first person to invent the e-cigarette. Way back in 1963, Herbert Gilbert made the world’s first device that could be used to inhale tobacco-flavored air. In Gilbert’s original version, there was no form of combustion and it was free of nicotine. He later designed a prototype that used a battery to create heat. He also used different flavors of water to create steam. He presented his prototypes to different chemical, pharmaceutical, and tobacco companies, but they simply turned down his prototypes.

Also called self-driving cars, autonomous cars have been making the news recently. Chief among them are Google’s self-driving cars. Google’s driverless cars have traveled over 480,000 kilometers (300,000 mi) with only two accidents, both of which were caused by humans. But self-driving cars aren’t new. In fact, their concepts have arguably been around since the days of Leonardo da Vinci, who invented a spring-powered cart with a programmable steering device.

More recently, however, General Motors made a self-driving car in 1958 that adjusted its steering wheel based on the alternating currents given off by a wire placed inside the road. While the vehicle did actually drive itself, it does not qualify as the first autonomous vehicle because it depended on wires placed inside the ground. The world’s first autonomous vehicle was made by S. Tsugawa and several of his colleagues at Japan’s Tsukuba Mechanical Engineering Laboratory. However, German engineer Ernst Dickinson is regarded as the pioneer of the autonomous car. In 1987, he developed the VaMoRs which was capable of traveling more than 90 kilometers per hour (55 mph) for about 20 kilometers (12 mi). Seven years later, he made the VaMP, which could recognize road signs, know its own position in a lane, detect other vehicles, and even decide when to change lanes. And a year after that, he and his team made another autonomous vehicle which traveled from Germany to Denmark. The vehicle had a maximum speed of 180 kilometers per hour (111 mph) and was controlled by a human for about 5 percent of the journey.

A few years back, a flying bicycle called the “Paravelo” was invented. And it isn’t called a flying bicycle for fun. It is a bicycle (with a large parachute on top) that actually flies. It travels around 25 kilometers per hour (15 mph) on land and 40 kilometers per hour (25 mph) in the air. It can also fly up to a height of 1,200 meters (4,000 ft). The best part? You don’t need a pilot’s license. The Paravelo has been called the world’s first flying bicycle, a title we must point out it does not really own.

The world’s first flying bicycle flew on November 9, 1961, when Derek Pigott of the University of Southampton flew in a bicycle with an airplane-like body. It was called the Southampton University Man Powered Aircraft (sumpac). Derek furiously pedaled the air-bike to get it off the ground. It then flew 1.8 meters (about 6 ft) above the ground over a distance of 64 meters (210 ft). While the flight was short and slow, it still does not change the fact that it was the first bicycle to fly and at the same time, the first human-powered flight.

In 2010, the Martin Aircraft Company introduced a jetpack it called “the world’s first piratical jetpack.” The jetpack even won a spot in Time‘s Top 50 Inventions of 2010. While its development has been on since 1981, the world’s first jetpack is known to have flown in 1958. It was designed by Wendell Moore, a researcher at Bells Aerosystems. Early prototypes of Wendell’s jetpack could reach a height of 5 meters (16 ft) and remain airborne for three minutes. This attracted the attention of the US Army, which funded the project with $150,000. Several test flights were later done for the US Army and even for JFK himself. The army later stopped paying for more research into the project because the flight time and distance were not convincing enough. NASA also wanted to use the jetpack for their Apollo 11 mission to serve as backups in case their lunar module malfunctioned. They later changed their minds, going for the lunar rover instead. After this setback, Bell discontinued further research on the jetpack.

Simply put, bladeless fans are fans without blades. They work by sucking in air at their base and then blowing them out through several holes in their ring. The fan is reported to have been invented by James Dyson, who calls it the “Air Multiplier.” Just like the flying jetpack, it earned a spot in Time‘s list of notable inventions of 2009. And just like the jetpack, it was not the first of its kind. The first bladeless fan was actually patented in 1981 by a Japanese company called Tokyo Shiba Electric. Although Tokyo Shiba’s bladeless fan was never manufactured, James Dyson’s initial design of a bladeless fan design looked so similar to that of Tokyo Shiba Electric that the patent office refused to grant him a patent. The patent granted to Tokyo Shiba had already expired, but the patent office still required something substantially different before it could grant a new patent to James Dyson. Dyson’s patent manager, Gill Smith, did not deny the similarities between both bladeless fans but said the difference between them was the “technology.”