The sirenians are a group of mammals comprised of dugongs and manatees, including the extinct Steller’s sea cow. Generally, they are slow-moving, aquatic herbivores that don’t seem to do much besides eat. But that’s misleading. They are fascinating creatures that are severely endangered because of irresponsible human actions and need our protection.

10Their Name Comes From Mermaids 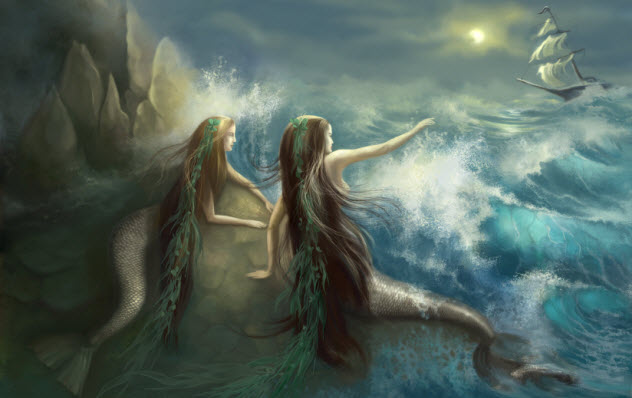 The name “Sirenia” comes from the Greek word for “mermaids.” Scientists named these animals after mermaids because sailors mistook them for mermaids, not because sirenians resemble the half-fish, half-woman creatures from our legends. You might be tempted to think that such a mistake is a tall tale or that sailors only mockingly called them “sirens,” but there have been historical instances when the confusion was real.

For example, Christopher Columbus noted in his log on January 9, 1493, that he saw mermaids and that they were “not half as beautiful as they are painted.” Perhaps the long sea voyages coupled with the chronic absence of women made Columbus and other sailors believe that they were looking at the fabled mermaids and not at a 700-kilogram (1,500 lb) chubby sea herbivore.

9Round Breasts And Other Oddities

In nature, round breasts are rare. Only three groups of mammals have them: elephants, sirenians, and humans. This trait was probably one of the reasons that those confused, poor-sighted sailors mistook sirenians for mermaids. It’s also where the term “manatee” comes from—the Caribbean word manati, which means “breast.”

Strangely, manatees are the only known member of the animal kingdom to have a vascularized cornea, a trait normally associated with injury or infection. However, it seems to be normal in manatees and dugongs, although zoologists are still trying to find an explanation for it. 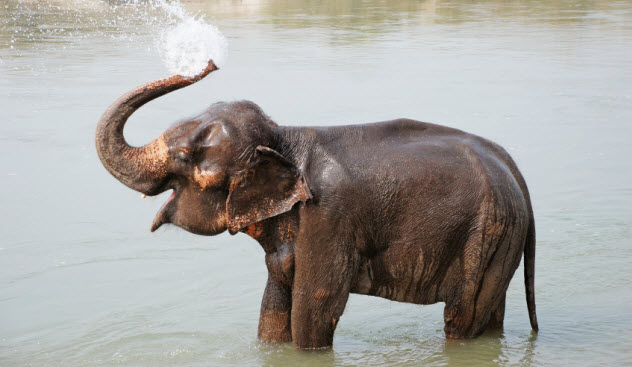 The closest relatives to sirenians are actually elephants and hyraxes, but their evolutionary split occurred roughly 60 million years ago when the crater of the meteor impact that killed the dinosaurs was still warm. We know that dugongs and manatees are related to elephants and hyraxes because they share several traits, such as spherical hearts, three or four toenails, similar skin and hair, and teeth that can be shed. Some sirenian species also have tusks.

Furthermore, they share a strict herbivore diet and use their upper lips for grasping food. Elephants have trunks, and sirenians have sucker-like snouts. However, manatees did not evolve from elephants and vice versa. In fact, the evolution of sirenians is much more fascinating. 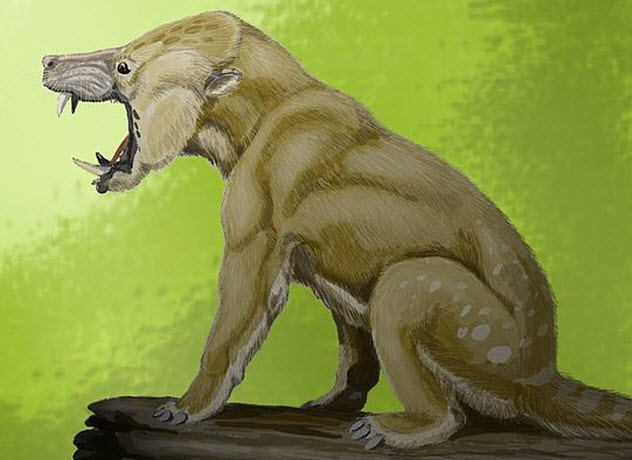 Currently, only four species of sirenians exist: one species of dugong and three species of manatee. Sometimes, we’re told that five species exist because the Steller’s sea cow became extinct so recently (1768) that it is often grouped alongside the extant species.

Since sirenians first appeared, about 60 species have lived on Earth. Their evolution has been neatly mapped, with a story as fascinating as that of cetaceans. Sirenians, elephants, and hyraxes split from a group of primitive, hoofed animals called condylarths.

Approximately 56 million years ago, sirenians spread throughout the world’s waters. Back then, their ancestors looked more like hippos. They could walk on land and were about the size of a pig.

By about 33 million years ago, sirenians were already fully equipped for living underwater. Their evolutionary record is full of transitional fossils as they changed from dwelling mainly on land to dwelling full time in water. During the millions of years of their evolution, sirenians did not limit themselves to one geographical area. Instead, they set out to conquer the world.

6How Sirenians Conquered The World 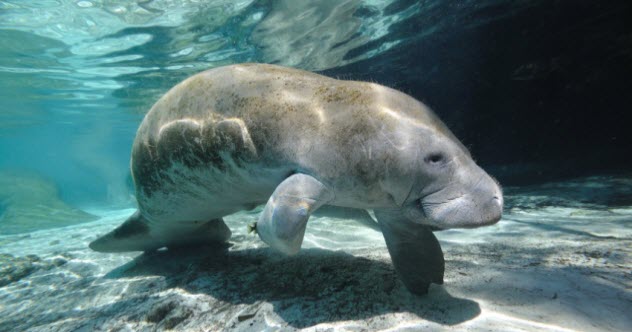 For over 100 years, paleontologists have discussed the question of where the sirenians first appeared: Was it in the Old World or the New World? Given that primitive fossils were found in both Jamaica and Africa, the scientific community needed an earlier fossil to determine the cradle of this group of mammals.

In the 1990s, the discovery of the Chambi sea cow fossil in North Africa began to solve the puzzle. From the oldest known sirenian fossil, we learned that the Chambi sea cow was a four-legged, semiaquatic, pig-sized animal. After putting all the pieces of the puzzle together—fossils, geographical areas, and the arrangement of landmasses about 50 million years ago—experts have discovered that the sirenians conquered almost all shore areas of both the Old World and the New World.

Starting in Africa, they spread to Europe, all through the Mediterranean, and as far north as present-day Germany. They also crossed the Atlantic Ocean via its north end where a land bridge existed. Those primitive ancestors of manatees had legs, so they couldn’t swim across the ocean. Instead, they underwent a lengthy migration over the course of several million years, which is impressive given their short legs and dependency on water sources.

In their heyday, when the climate of the globe was considerably warmer and even Greenland had a quasi-tropical climate, sirenians conquered all the shorelines up to the Arctic Circle. As time passed and the climate cooled, they died out in most cold waters. In fact, only one species could exist in the Arctic Circle. 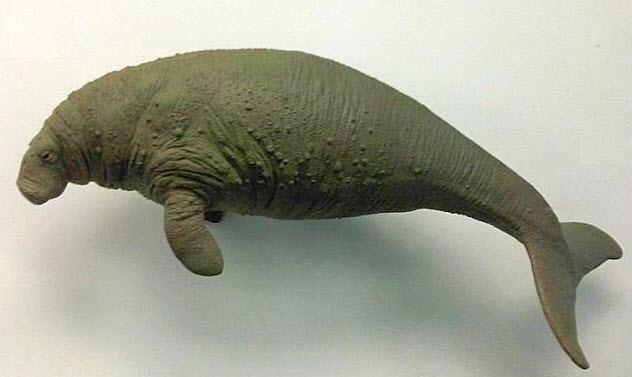 Hydrodamalis gigas, or Steller’s sea cow, is probably the strangest and most fascinating sirenian. Discovered in 1741 and extinct by 1768 due to overhunting, little is known about this animal. Based on accounts and sketches, it differed from other sirenian species.

First, it was huge. Roughly the size of a small whale at up to 10 meters (33 ft) and 11,000 kilograms (24,000 lb), Steller’s sea cow dwarfed an entire school of manatees put together. With a small head and two small fins, it looked like a giant overcooked sausage.

According to Wilhelm Steller, the explorer who discovered the sea cow, only about 2,000 existed in the Bering Sea in the vicinity of several islands. Its habitat was unusually cold for a sirenian, another strange trait of this species. In addition, Steller reported that their food—kelp—became so scarce during the winter that the animals became emaciated by the time spring came.

Soon, large crews of seamen went to the Bering Sea to hunt sea otters. They mercilessly hunted sea cows, too. Meanwhile, the diminishing sea otter population allowed sea urchins to multiply out of control and eat most of the kelp. All these factors contributed to the sea cows’ demise. Nowadays, some wonder whether there is any remaining population in the icy northern waters. So far, the scientific community remains skeptical.

4It Is Illegal To Hug One

All species of manatees and dugongs are endangered. That’s why governments have launched serious protection efforts for these animals. Even so, their exceptionally gentle natures leave them at risk. In the US, the biggest threats for manatees are the propellers of motorboats, which leave deep gashes in the flesh of these slow-moving mammals.

However, stress is also a serious danger for these animals. In Florida, it is illegal to touch a manatee or take one out of the water. In 2010, a man was charged for hugging a baby manatee because cold stress syndrome could have caused the animal to die. Two years later, a woman in Florida was charged after riding a manatee, which is punishable by a $500 fine or 60 days in prison.

Outlawing the hugging and riding of manatees are only two measures for protecting these species. Laws against hunting them have also been enacted around the world so that the remaining species won’t suffer the fate of the sea cow. In some areas, extra caution is needed when driving motorboats.

Fortunately, these measures have had a positive effect. Recent studies have shown that the manatee population in Florida has increased while the dugong population in Australia has remained constant during the last few decades. Nevertheless, the two species remain endangered.

3They Are Tasty But Off-Limits 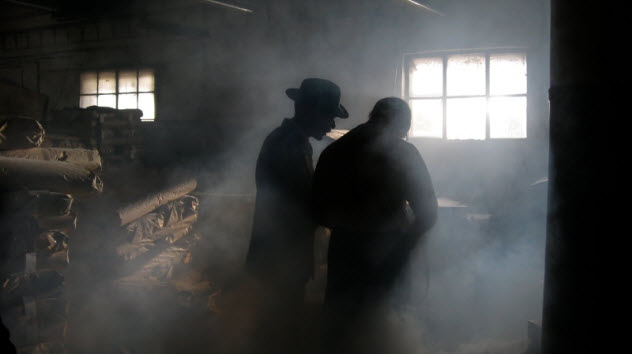 Exotic dish enthusiasts in certain parts of the world are dying to get their hands (and their taste buds) on a manatee or dugong steak because they have an interesting taste and aroma, or so the few who have eaten such meat say. However, most jurisdictions consider hunting sirenians illegal and prohibit the consumption of their parts.

Even though Australia regulates the number of killed animals to sustain wild populations, some Aboriginal peoples are entitled to eat dugongs for reasons that pertain to traditions and cultural heritage. Also, illegal black markets that sell dugong meat in Australia and Asia are here to stay.

In the US, the laws protecting manatees are harsh, but this doesn’t deter people from dreaming about having a manatee steak one day, especially when their grandfathers had the opportunity to legally hunt these animals until the 1960s and tell stories about how good they taste. Unsurprisingly, there are quite a few individuals who are considering farming manatees in the future, which may be a good idea.

After all, if manatees could be farmed, their numbers would rise as some animals are released into the wild. On the other hand, manatees live quite long and breed quite rarely, which means that manatee farms would grow slowly.

2Their Senses And Brains Are Quite Surprising

At first glance, sirenians with their apparently dull senses seem to be lazy creatures that are not the sharpest knives in the drawer. They don’t call them sea cows for nothing. However, first impressions can be deceiving.

In fact, these animals are equipped with an array of senses that make them quite aware of their surroundings, and there’s more going on inside their brains than we might expect. For instance, their faces and bodies are covered with several thousand whisker-like hairs called vibrissae which send signals to their brains and help them explore their surroundings with the sense of touch. Some experts believe that sirenians can hear low-frequency sounds with these hairs.

Their eyesight is also good. They can see in color (at least blue and green), and they can hear with their cheeks. But we still have more to learn about their senses.

As for brain power, sirenians have smooth brains, but they also have the smallest brains among mammals when compared to their body size. But that doesn’t mean they’re dumb. In a 2006 study, neuroscientist Roger L. Reep found that manatees are “as adept at experimental tasks as dolphins, though they are slower moving and, having no taste for fish, more difficult to motivate.”

1The Relationship Between Sirenians And Humans 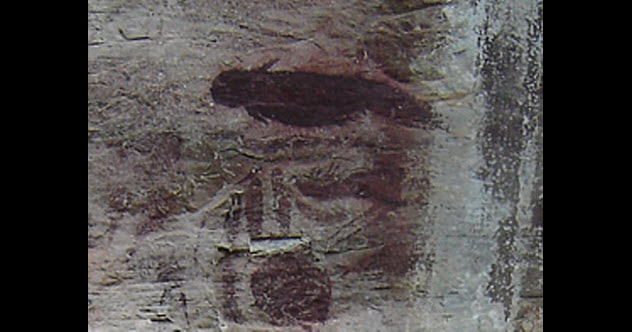 Sirenians and humans have shared a long history. The oldest-known depiction of a sirenian appeared in a cave painting from 5,000 years ago in Tambun Cave, Malaysia, which means that this animal was quite important to those people.

During the Renaissance, dugongs were considered a wonder animal and presented as genuine mermaids in the sideshows of the time. Their meat and other body parts were considered precious in many Asian cultures. In Arabia, the tusks of dugongs were used for making sword handles. But in southern China, fishermen avoided hunting the dugong because it would bring bad luck, a belief also held by Philippine natives.

However, the most surprising mention of a sirenian is in the Old Testament. According to certain interpretations of Judaic terms, dugong skins were used to cover the inner tent of the Tabernacle, the portable worship tent where the ancient Hebrews kept the Ark of the Covenant. But there are scholars that debate this. The word tahash in Hebrew has the same origins as tucash, the Arabic word for dugong. Also, the outdated scientific term for dugongs is Halicore tabernaculi. If any of this is correct, it suggests that dugongs were a prized animal in biblical times.

Kyle loves science and believes that people should work less and enjoy nature more. You can check out his website here.