According to research led by the American Museum of Natural History in 2017, there are approximately 18,000 bird species on Earth—nearly double the amount previously thought. One of the study’s authors said that this number has concerning implications for conservation practices.

Many bird species have already gone extinct due to predation or human activity. Despite significant conservation efforts during recent years, a lot of species are on the verge of extinction today—including some of the birds on this list. So let us appreciate these bizarre avians while we still can. 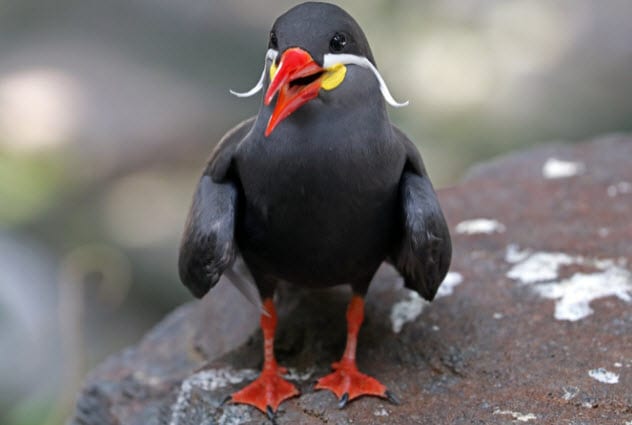 Named after its habitat, which used to be ruled by the ancient Inca Empire, this bird can only be found near the Humboldt Current. Inca terns have adapted to hunting for anchovies and other small fish by plunge-diving into the cold current waters. They sometimes also scavenge for remains left by dolphins and sea lions.

From a distance, this avian may seem like any other ordinary bird species. But up close, it is impossible to miss the Inca tern’s most unusual feature—a dashing white mustache. Both male and female birds grow the mustaches. This highly social species nests in colonies of several thousand birds, typically laying eggs in cliff hollows or fissures.[1]

Although the Inca tern is not considered to be under threat of extinction, the reduction of anchovy stocks due to overfishing could have a serious impact on their population size. Cats and rats on some of the islands can also prevent nesting. In 2009, the Peruvian government created the Guano Islands and Capes National Reserve, which protects Inca tern and sea lion colonies on 28 guano islands and cliffs. 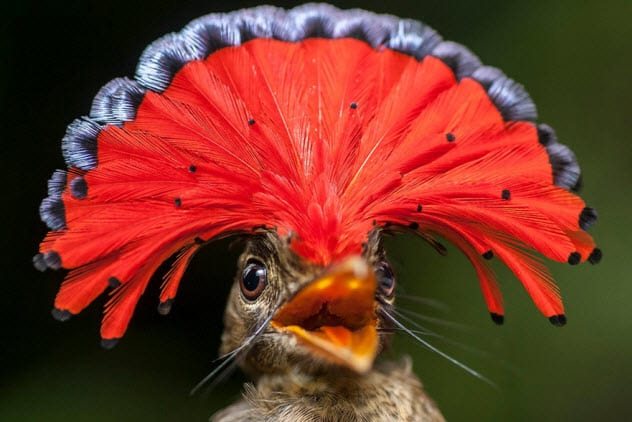 Even though all royal flycatchers are fairly similar, some experts divide them into four subspecies based on geographical location. The Amazonian royal flycatcher is widespread in northern and central South America east of the Andes. They primarily inhabit humid and deciduous lowland forests.

Royal flycatchers can be recognized by a unique ornate crest which ranges among various shades of red and orange. The crest is usually reclined, giving the flycatcher a hammerhead appearance. When raised, the crest has a distinctive fan shape.

Besides location, Amazonian royal flycatchers are distinguished by their cinnamon-colored rump and tail. These avians are also smaller and darker than other flycatchers. Males have exclusively red crests, and females have orange ones. As their name suggests, royal flycatchers primarily feed on insects.

Although this species is described as uncommon, Amazonian royal flycatchers are not under any significant threat. That could be partly attributed to their habit of nesting on branches above water, which helps with the safety of young birds.[2] 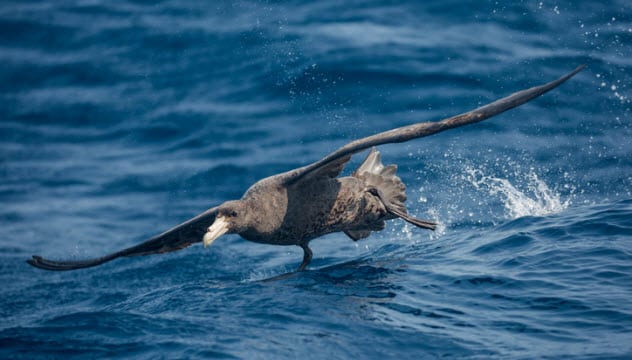 A hunched back during flight is another common characteristic. This circumpolar species is distributed from the subantarctic islands south to the Antarctic continent.

Due to their diet containing a lot of elephant seal and sea lion carcasses, the southern giant petrel is known as the vulture of the sea. Other delicacies include fish, squid, penguins, and albatrosses.

These savage birds are frequently seen with blood-covered heads while feasting on animal remains. There are also some reports of southern giant petrels bashing other seabirds against the surf or holding them underwater to drown them.

On top of that, southern giant petrels are known to vomit their putrid stomach oils when faced by threats or nuisances, such as fishing boats. Annoyed sailors, who sometimes have their fish stolen, have nicknamed the birds “stinkpots.”[3]

Researchers from the University of Barcelona have discovered that some Antarctic bird species could be threatened by human diseases. Birds including kelp gulls, penguins, and southern giant petrels can pick up bacteria such as Salmonella and Campylobacter. After testing fecal samples of more than 600 seabirds from several different locations, three findings suggesting reverse zoonosis were found. 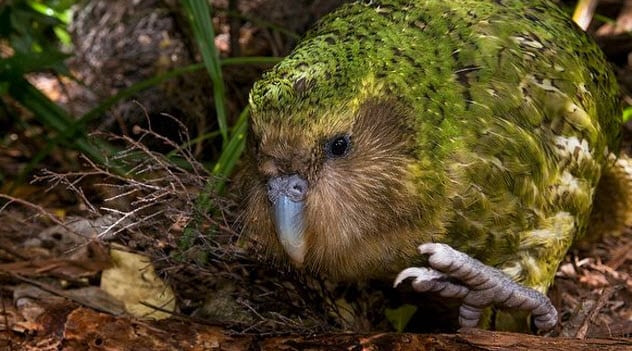 New Zealand was the perfect place for isolated animal species to evolve separated from the rest of the world. As a result, the country is now known for many unique animals. And the kakapo is one of the most bizarre species among them. It is the world’s heaviest parrot, the only flightless parrot, and one of the longest-living birds on Earth.

Kakapos do not reach sexual maturity until 9–10 years old and are believed to live past age 90. However, the oldest-recorded specimen died around age 80. Despite their long life spans, the kakapo population has been critically endangered for more than a century because they only breed every 2–5 years, live on the ground, and freeze when in danger.

The parrot used to be abundant until the first human settlers arrived and hunted them for feathers and meat. Land clearance and other predators—such as domestic cats, dogs, and stoats—almost drove kakapos to extinction. The first conservation efforts began in 1894, but they were unsuccessful until the kakapo breeding program established in 1995.

There were only 51 kakapos left when the program began, but their population has increased significantly since then. According to the New Zealand Department of Conservation, there are 148 kakapos alive right now.[4] 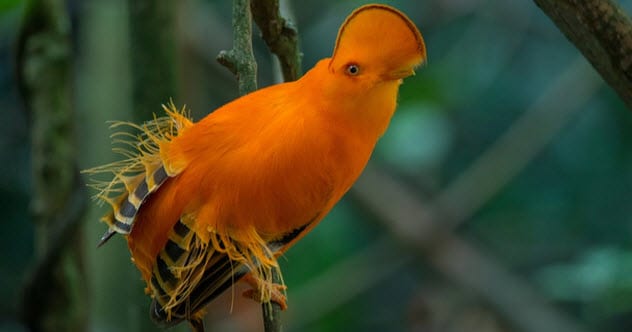 The Guianan cock-of-the-rock is native to Colombia, Venezuela, southern Guyana, and northern Brazil. Both males and females can be instantly recognized by their constantly erect crest, which covers their broad-based bill. Male birds have an incredibly bright orange color. Meanwhile, females are brown, sport smaller crests, and have a black, yellow-tipped beak.

Named after their dependence on huge boulders and rocky caves for breeding, Guianan cocks-of-the-rock spend a lot of time on courtship. Up to 50 males participate in communal leks, which consist of combat and dancing displays. Females prefer males that display dominance by controlling the center of the lek.[5]

Communications between Guianan cocks-of-the-rock contain a large variety of sounds. They can snap their beaks to create a popping sound. At leks, males utter loud, crowing, chicken-like noises. While foraging, the Guianan cock-of-the-rock is known to give out loud sounds which have been likened to a rubber duck being strangled.

Their favorite meals are fruits and berries. But if none are available, the birds will settle for insects, small reptiles, or frogs. 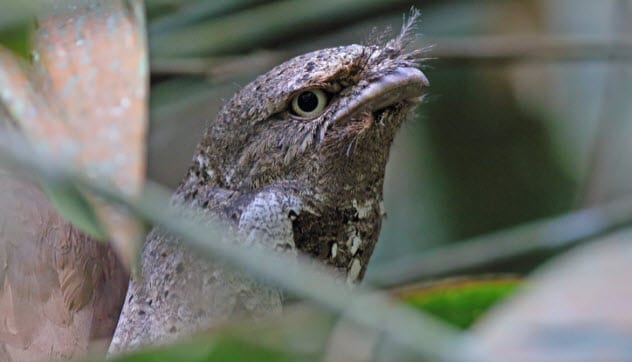 The Sri Lankan frogmouth can only be found in the dense tropical forests of India and Sri Lanka. It is no secret how the frogmouth got its name, with a head as wide as its body and a large, gaping mouth. Males are gray and heavily spotted with white, while females sport a rusty red color and sparse white freckling. They are also equipped with a broad, hooked, flattened bill.

These nocturnal birds spend most of the day resting on branches and prey on insects at night. The Sri Lankan frogmouth is not considered to be a vulnerable species, but the recent trend of replacing shade-grown coffee plantations with more profitable tea plantations has demolished some of the bird’s native forests. Other threats to their habitat are caused by cultivation, forestry operations, fires, and grazing.

In the 19th century, the frogmouth was found only in Sri Lanka. The bird has been spotted farther and farther north in recent years, which has been attributed to climate change. Another animal species, the brown palm civet, has been observed moving farther north as well. Scientists are concerned that these habitat shifts could be global warming growth indicators.[6] 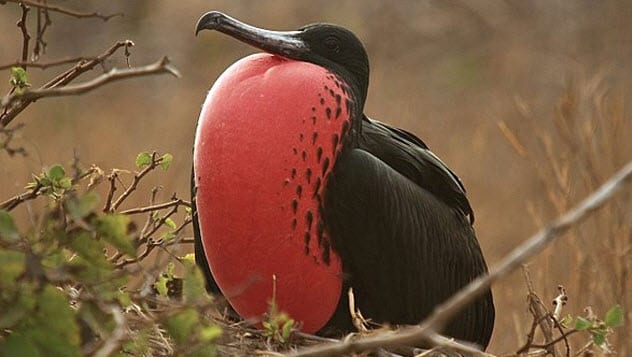 The magnificent frigatebird uses its deeply forked tail to effortlessly steer through tropical breezes. It prefers to fly along the coast of the southern US, Mexico, and the Caribbean when winds are at their strongest, keeping the birds aloft. This allows them to remain in the air for up to two months without a single landing.

Since magnificent frigatebirds do not have waterproof feathers, they avoid landing in water. Wet frigatebirds are unable to fly. Instead, they feed by harassing other birds for food and snatching it in midair. It takes a lot of practice to become a sky pirate, so young frigatebirds chase each other with sticks. When one bird drops the stick, another one catches it.

The most distinguishable magnificent frigatebird feature is a large, bright-red throat pouch which males inflate to attract females. It is also the only seabird with a significant difference in appearance between genders. Females are usually larger than males and have a white throat instead of the red pouch.[7] 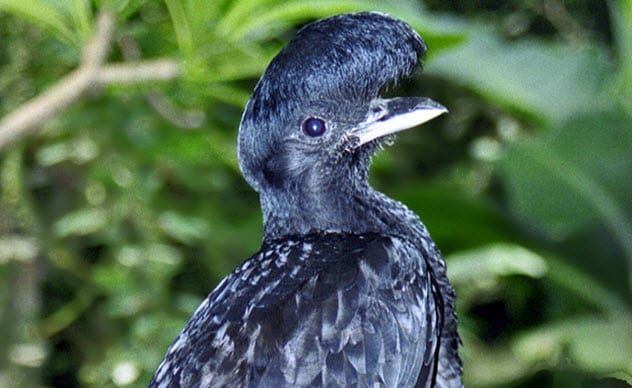 Elvis Presley would be jealous of the hairlike feather crest that hangs over the bill of long-wattled umbrellabirds. These fancy avians are also equipped with a long, inflatable wattle that dangles from the middle of their chest. The wattle is covered in short, scaly feathers and can resemble a pine cone when inflated.

Males use these ornaments to attract females during mating season. Male long-wattled umbrellabirds are also twice the size of females, which have much smaller or absent wattles. Compared to most birds, they are clumsy fliers and prefer to hop between tree branches.

The long-wattled umbrellabird is endemic to western Colombia and Ecuador. Since the bird spends most of its time in humid forests, the habitat loss caused by logging, road building, and gold mining has significantly affected its population size. Some locals also capture these animals and sell them, keep them as pets, or eat them.

Helmeted hornbills are large, noisy birds confined to the pristine forest habitats of Brunei, Malaysia, Thailand, Indonesia, and Myanmar. The structure on a hornbill’s beak is called a casque, which is French for “helmet.” Unlike other hornbill species, the casque of helmeted hornbills is solid and heavy, accounting for more than 10 percent of the animal’s weight.

The helmeted hornbill can be recognized by its bizarre facial features and long central tail feathers. The wrinkled skin on its throat, known as a gular pouch, is used to carry items of food back to the nest. The pouch is red for male birds and turquoise for females. These fruit-loving avians are very picky. Only the finest lowland tropical rain forests with plenty of fruiting trees provide a suitable habitat.

During incubation, the female helmeted hornbill is sealed in her nest with mud. The male then supplies her with food by regurgitating fruit from his throat pouch through a small opening to the nest.

Due to high demand from China for carvings made from the bird’s casque, the helmeted hornbill has become critically endangered. The species has a very slow reproductive rate, and small amounts of poaching can disproportionally reduce their numbers. More than 30 wildlife conservation organizations are doing everything in their power to keep this species alive.[9] 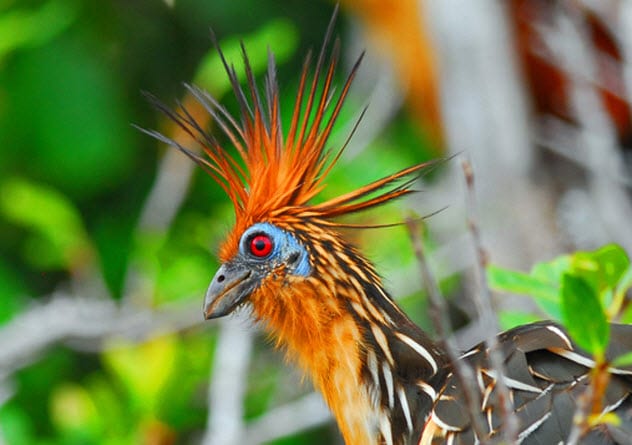 Hoatzins are widespread and fairly common throughout central South America. They often sit in the open but retreat to denser cover if threatened. The bird can typically be found in trees and shrubs along rivers and lakes. Although the hoatzin may appear fearsome, it is not skilled at flying and its movements can be described as awkward.

Visually, the bird is distinguished by a loose crest, bright blue facial skin, and red eyes. However, the bird’s most unusual feature is its multichambered stomach. Hoatzins are sometimes referred to as flying cows because they feed on young leaves and buds, which are digested with the aid of bacteria and microbes. It is the only bird in the world that can survive by eating nothing but leaves.

As if having a bovine digestive system was not enough, hoatzins are also born with claws on their wings. Young hoatzins can swim and often jump into the water when faced with danger. Then they use the claws to climb back into trees. Wing claws used to be a common feature in ancient birds, but this species has managed to maintain them over generations. The claws are lost when the hoatzin matures.[10]