Cats and mice diverged about 95 million years ago. In nature, a cat-mouse mash-up just isn’t possible (except when a cat mashes up a mouse with its teeth, which is common enough).

In the lab, though, the rules can be bent a little. Sometimes, blurring the cat-mouse boundary actually makes sense from a scientific standpoint, although it can be controversial from an ethical standpoint. 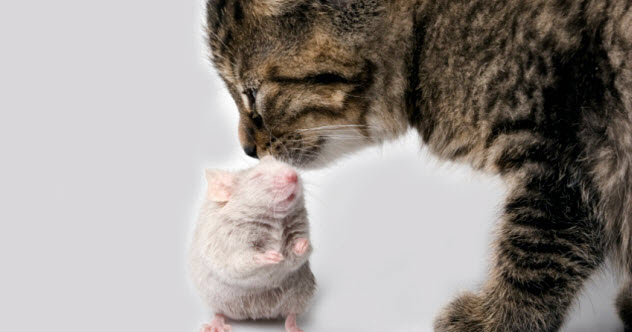 A cat-mouse hybrid might be a conflicted animal. Maybe it would attack its own body, intent upon killing it. Or live in a constant state of anxiety, frightened by its own smell.

We don’t know because cat-mouse hybrids don’t make it to term. Not even close. However, scientists have been able to make a start on such animals in both directions by combining a cat egg with mouse sperm and a mouse egg with cat sperm. After conception, many of these hybrids divide into two cells. A few even make it to a more advanced stage called the blastocyst.

In nature, hybrids are unable to make it even this far. Cat-mouse sex would be a dicey affair, if only because of the size difference. Even if they were able to have sex, the egg and sperm still wouldn’t be able to fuse. Eggs are surrounded by a protective layer called the zona pellucida, which blocks the sperm of unrelated animals.

In the lab, scientists can bypass these problems and inject the sperm directly into the egg. It also works if they cut off the sperm tails and use just the sperm heads. Using this method, scientists have been able to try other combinations besides cat and mouse. For example, they’ve injected hamster sperm into cat eggs. They’ve also injected two sperm into the same mouse egg: one cat sperm plus one mouse sperm.

These combinations haven’t made it far, either. 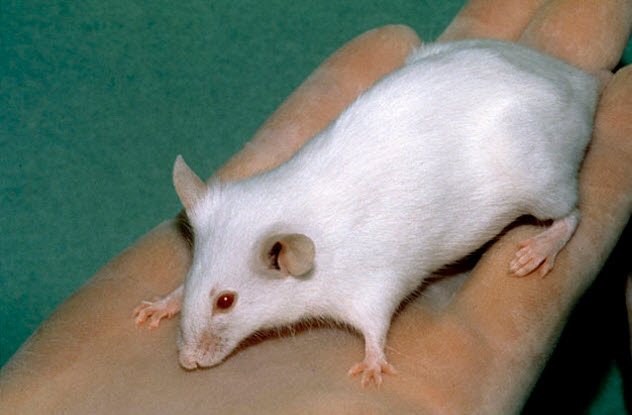 In nature, cats kill mice using their teeth and claws. However, in a 1985 study, one cat got a chance to inflict harm in a much weirder way. Scientists began by harvesting tumors from 30 cats, all victims of breast cancer. Some of the cats, for which hope remained, underwent a simple surgery. Others were euthanized.

Then the scientists injected a special strain of mice with cells from one tumor. These mice lacked two important traits. First they had no hair, which earned them the name “nude mice.” Second, none of these cats had a thymus, an immune organ in the chest. Without this organ, the mice couldn’t make T cells.

Lacking T cells, the nude mice were unable to reject the transplanted cancer. The cat’s cells took root and repeatedly divided to make new tumors. Given enough time, these tumors would probably have killed the mice. In this experiment, though, the scientists killed the mice themselves.

When taken from bodies, cancer cells can sometimes live in labs for a long time. This was certainly true of this cat’s cancer, which appeared in another paper that was published 28 years later.

According to the 2013 paper, scientists injected the cat’s cells into two new places. The first was SCID mice, a new strain which also lacked T cells. The second was chicken eggs, specifically onto membranes outside the embryo. In both species, the cells grew into tumors.

It’s not clear what happened to the cat. It probably died in the 1980s as a result of its cancer. However, there’s an outside chance that it recovered and even lived a few decades longer. When the 2013 paper was published, though, the cat was almost certainly dead.

But that is the amazing thing about cell culture. Long after the cat’s hunting days were over, a part of the animal lived on. Fittingly enough, that part continued to behave like a cat by wreaking havoc on mice and baby birds.

HIV infects humans. FIV, a related virus, infects cats. In both species, infected cells can fuse with uninfected cells to create multicellular blobs called syncytia, although this fusion depends on the presence of the right proteins.

As outlined in a 1998 paper, one important protein is CXCR4. Scientists got FIV-infected cat cells to form syncytia with cells from a mouse, a hamster, and a mink. The trick was to express CXCR4 in them first.

Scientists tried several kinds of CXCR4, including one from a human and one from a cat. Somewhat surprisingly, the human CXCR4 worked best. Through these experiments, the scientists created several multispecies mash-ups. In one combination, mouse cells containing a human gene glommed on to cat cells to make a big, FIV-infected blob. 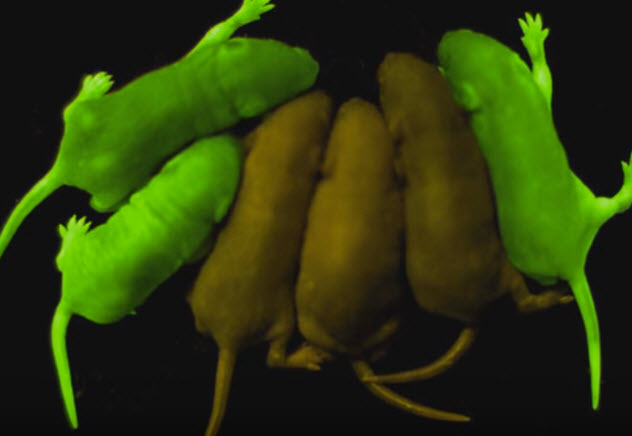 In a 2002 paper, scientists joined two pieces of DNA that belonged to distantly related animals, a firefly and a cat. The firefly’s DNA encoded the luciferase gene, which enabled the firefly to flash at night. The cat’s DNA had once been attached to a gene called NCX1, and it contained instructions for expressing NCX1 in the heart.

To test this DNA, scientists injected it into the eggs of a laboratory mouse. In some eggs, this DNA was able to wriggle its way into the mouse genome and settle there permanently. Five of these genetically modified eggs developed into mice. Two went on to have babies that also contained the firefly-cat DNA.

When the heart cells obeyed, the hearts of these mice filled up with luciferase, similar to what happens in fireflies. To get the heart cells to actually glow, scientists removed them from the animals’ bodies, broke them open, and added a special molecule called luciferin. After that, there was light. 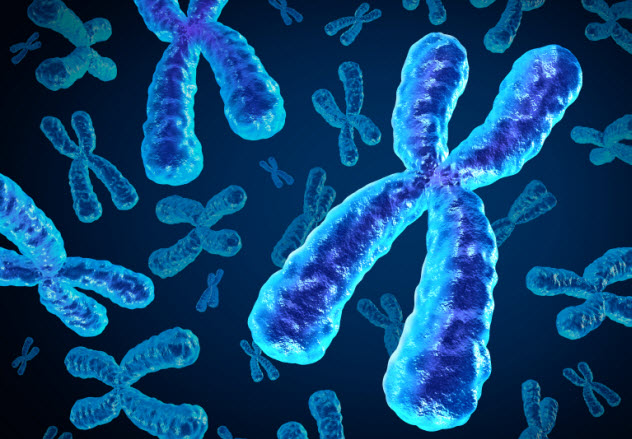 Just as mouse viruses grow inside of mouse cells, cat viruses grow inside of cat cells. In a 1976 paper, scientists mashed together an infected cell from each of these animals. In this new cat-mouse cell, both viruses were much less active. Something from the cell of each animal—probably a gene—seemed to be blocking the other animal’s virus.

However, both cat and mouse genomes are big, which made it difficult to pinpoint either gene or even narrow down the culprit. Fortunately, these mash-up cells were unstable. For the most part, they held on to their mouse chromosomes, which meant that the mouse gene couldn’t be mapped. Many of the hybrids, though, tended to lose cat chromosomes. 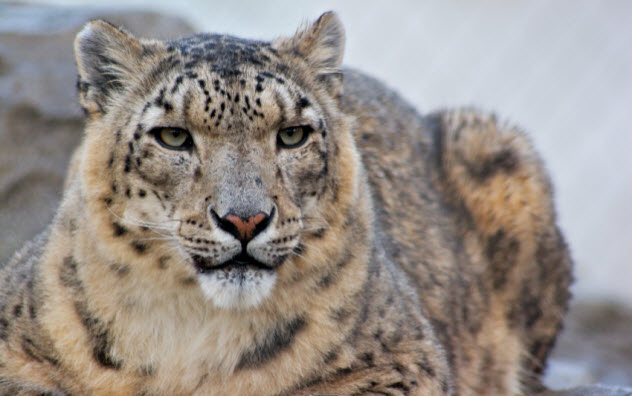 It’s tricky to turn back the clock to return pluripotency to an adult cell, but science can do it by transforming the cell with new copies of several genes. After this transfer, the cell is described as an induced pluripotent stem cell (iPSC). These cells have many possible applications. Some are medical, while others help endangered species.

As a first step, scientists began work with ear cells from a snow leopard. To convert these cells to iPSCs, scientists engineered a special virus containing five human genes that served critical roles in helping embryos behave like embryos.

This was classic iPSC behavior, and it confirmed that the scientists’ transfer had worked. The scientists maintained this cat-mouse mash-up for 10 weeks. Then they killed the mouse and removed the snow leopard tumor. 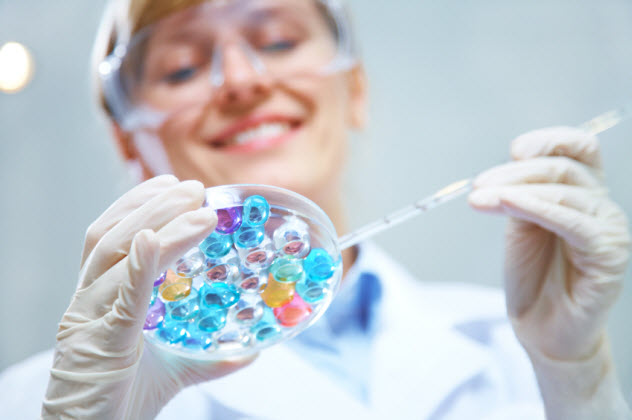 To fight infection, many animals make various forms of specialized proteins called antibodies, which bind to the invader and mark it for destruction. Each form is produced by a different kind of B cell and binds to the invader in a slightly different way. This condition is called polyclonal.

Each hybridoma produces just one antibody (like its B cell parent) and makes many copies of itself (like its myeloma parent). The result is a endless source of monoclonal antibodies that are set in a lab dish.

When scientists don’t have a myeloma line for a particular species, they borrow a myeloma from a second species like the laboratory mouse. Cow-mouse, mink-mouse, and goat-mouse fusions have all been used successfully to make antibodies.

Using this approach, the authors of a 1993 paper tried to make cat antibodies by extracting cells from the spleens of seven cats and fusing them to two different mouse myelomas. These fusions produced many cat-mouse hybrid cells. Each contained a mixture of chromosomes, and many were larger than their parent cells. In the end, though, none of the cells produced any antibodies.

To put a positive spin on this failure, the scientists suggested that it might be possible to fuse these hybrids to another cat cell and make a mouse-cat-cat cell. Possibly, these cells would make antibodies because the same had been already been done in mouse and human cells to make mouse-human-human hybridomas. 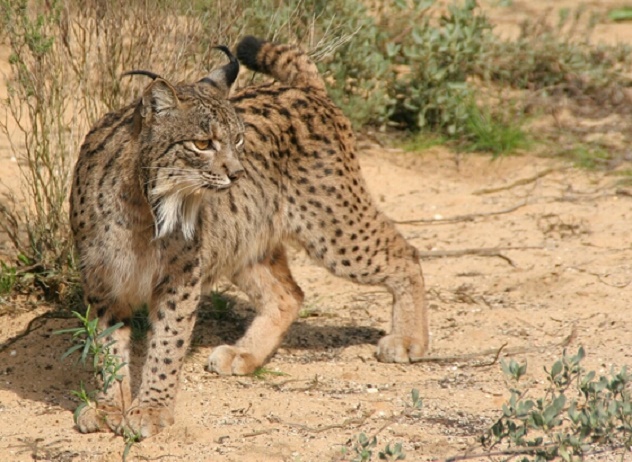 If you want to perform a testicle transplant between species, the mouse makes a popular recipient. Bits from the testicles of sheep, dogs, and buffalo—to name a few—have all been transplanted into mice under the skin on their backs. In some cases, functional sperm can be harvested from these transplants and used to make baby animals.

According to a 2004 paper, scientists removed the testicles from young domestic kittens, cut them into small pieces, and grafted them under the skin of mice. Some of these grafts survived for more than a year, and some produced mature sperm.

In a 2014 paper, scientists explained how they extended this technique to the Iberian lynx, an endangered cat species. They harvested testes from six young animals that ranged in age from a six-week fetus to a two-year-old subadult.

Testicle pieces from a six-month-old lynx cub worked best. After these pieces were transplanted into mice, some of them started the process of making sperm but couldn’t complete it within the time frame of the experiment. They only made some primitive male germ cells called spermatogonia but no mature lynx sperm.

2 Lion Ovaries Transferred To A Mouse 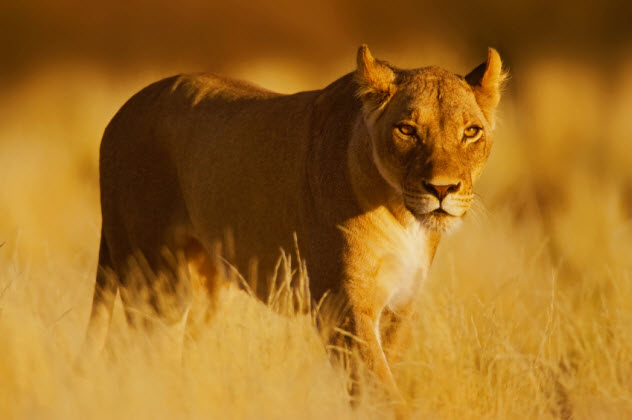 Ovaries can also be transplanted into lab mice. Many different species—including cows, elephants, and wallabies—have served as ovary donors. So have domestic cats.

In these cat-to-mouse ovary transfers, different kinds of mice have been used, including female mice whose own ovaries have been removed and male mice that have been castrated. The renal capsule, just under the mouse kidney, serves as a popular transplantation site.

According to a 2014 paper, scientists harvested ovaries from zoo lions, cut them into pieces using a punch device, and transplanted several pieces under the back skin of a lab mouse. The ovary pieces from the lions were maintained inside the mouse for four weeks. During that time, parts of the ovary did continue to develop but not enough to make mature lion eggs.

1 A Mouse With A Cat’s Immune System 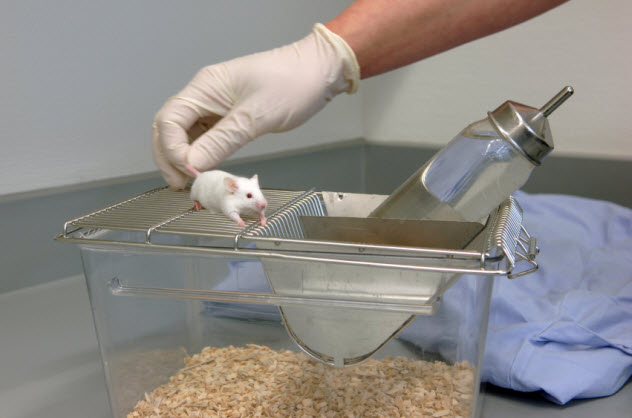 The immune system consists of various cells and organs scattered throughout the body, which makes transplantation a complex process with many steps.

According to a 1994 paper, scientists transplanted a cat’s immune system into mice. They began by dissecting one-day-old kittens from an infection-free mother. From each kitten, they removed a variety of body parts, each known to play an important role in the immune system.

Then the scientists performed several transplant surgeries that used a special strain of mice as recipients. The immune systems of these mice had already been disabled.

Once the surgeries and injections were over, these mice were catlike by several measures. Their blood contained cat DNA. They began to produce a cat immune protein called IgG. And finally, as detailed in a 1995 paper, the scientists were able to infect these catlike mice with FIV, the cat virus.

In addition to cat-mice, Rachel Rodman also writes about sheep-goats and chicken-rabbits. You can read more here.