New Zealand is home to many weird species of plants and animals. The fact that the archipelago was isolated for millions of years has allowed strange critters like the kiwi, kaka, and the moa to exist up until modern times.

When it comes to reptiles, New Zealand is also home to the tuatara, a lizard-like creature that doesn’t seem all that outstanding at first glance. However, there are quite a few reasons that make this 1.5-kilogram (3 lb) creature the most interesting reptile on the face of the Earth.

There are very few species that are “one-of-a-kind” in the natural world. We’re talking about creatures resembling nothing else in the animal kingdom, like the platypus and the aardvark. The tuatara also belongs in this special group. Why? Well, all of its relatives are extinct.

This odd reptile actually has bird features, despite its lizard-like appearance. (Interestingly, the order it belongs to, Rhynchocephalia, means “beak heads.”) However, its family dates back 225 million years, making it a living fossil. In fact, the tuatara shares many features with Hylonomus lyelli, a creature that’s considered the oldest known reptile. This makes the tuatara of great interest for biologists.

Because the tuatara has been around since the dawn of the dinosaurs, zoologists study this creature to determine how primitive reptiles behaved and what their anatomy was like. It’s also the least evolved of all the amniotes (a group that includes reptiles, birds, and egg-laying mammals). Interestingly, the tuatara has a brain, heart, and method of locomotion similar to those of amphibians. This clearly reveals that amphibians are the ancestors of reptiles.

Other features of the tuatara’s physiognomy—like its primitive, bony skull or its beak-like upper jaw—are no longer seen in modern reptiles. And because its brain is minute, scientists have used the tuatara’s brain cavity to estimate the volume of dinosaur brains. The primitive design of this animal is a gold mine for zoologists in terms of studying how the earliest amniotes were built and what type of lives they had. 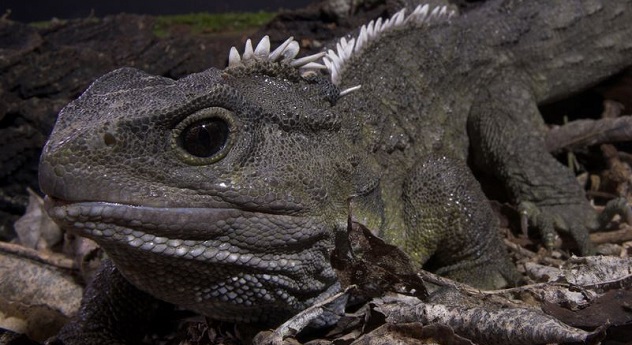 While we’ve said that the tuatara is not directly related to reptiles or birds, we need to mention that this weird reptile has elements from a wide variety of orders, from snakes to turtles and from birds to amphibians. In fact, it shares commonalities with almost all vertebrates, except for mammals.

For example, the tuatara has a beak-like tip on its upper jaw and a rigid skull like that of a turtle. It’s shaped like a lizard, has a double row of teeth like a snake, and possesses organs similar to those of amphibians. It’s like nature created the tuatara out of remaining Lego parts from other designs. In other words, it’s the reptile equivalent of the platypus.

Moreover, the tuatara is a wonderful example of a transitional species, as its physiology bridges the gap between water-loving amphibians and land-dwelling reptiles. However, it is not an ancestor of reptiles or birds. In fact, the tuatara evolved as little as possible. 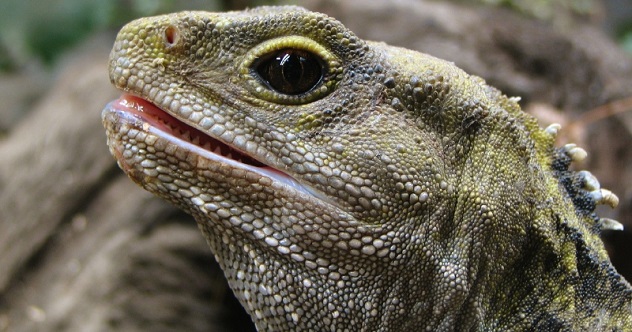 In terms of senses, this ancient reptile has impressed researchers with its primitive design. The tuatara can barely hear, meaning that 200 million years ago, nature wasn’t very concerned with the task of evolving ears.

In fact, the tuatara has the most primitive hearing organs of any amniote (along with turtles). In fact, there’s no earhole or eardrum at all. It does possess a middle ear cavity, which is full of fat tissue, but the hearing organs are capable of responding only to low frequency sounds. The reptile can only hear noises between 100–800 Hertz. In other words, what we can hear compared to the tuatara is like what bats hear compared to people.

However, the tuatara does have well-developed eyesight for such a primitive being. It has independent focus, a duplex retina, and night vision.

The tuatara is primitive to the point that it’s kind of alien-like. As we mentioned before, it has double rows of teeth, but really, those aren’t teeth at all. They’re actually just osseous formations in its jaws. They don’t fall out easily, but on the other hand, they’re not replaceable.

This odd reptile has also been found to have an unknown acid in its cloaca, what scientists call “tuatara acid.” However, experts have not yet found a good use for the stuff. Even weirder, the tuatara has a unique type of hemoglobin, and it’s the only reptile that doesn’t possess a penis.

However, the tuatara’s strangest trait is its third eye. Similar to the raven in Game of Thrones, this creature has its extra eye slightly above and between its two main eyes. While other species also have this parietal eye (think frogs, lizards, and salamanders), the tuatara’s third peeper actually possesses its own lens, cornea, retina, and even rod-like cells. This indicates that the eye is capable of perceiving light, and that it evolved from a real, functioning eye. Scientists suspect that its purpose is to regulate the tuatara’s circadian rhythms.

Like pandas, tuataras are not too keen on reproduction. For an animal this small, the tuatara can live for quite a long time. Its estimated life span is well over 100 years. However, they reach sexual maturity between 10 and 20 years, and females can only breed once every two to five years. This agonizingly slow rate of reproduction is one reason why they’re so rare.

Furthermore, since tuataras live only on a few islands around New Zealand, this means their extremely small populations are vulnerable to inbreeding. This further lowers the resilience of the population.

On the flip side, they can also breed at some pretty extreme ages. A male tuatara held at the Southland Museum and Art Gallery in New Zealand became a father at 111 years old. That’s the same age of Bilbo Baggins when his party takes place in The Fellowship of the Ring.

The tuatara can endure incredibly low temperatures and will occasionally slip into hibernation. However, it has developed exceptional sensitivity to temperature changes, and the sex of their young is determined by incubation temperature. That’s true for many reptiles, but for this species, the difference in temperature that dictates gender is exceptionally small. We’re talking just 1 degree centigrade!

This means that climate change is very dangerous for the tuatara, as it can spell disaster by making the eggs hatch males in extremely large numbers. Obviously, a lack of females severely endangers the survival of the tuatara population. 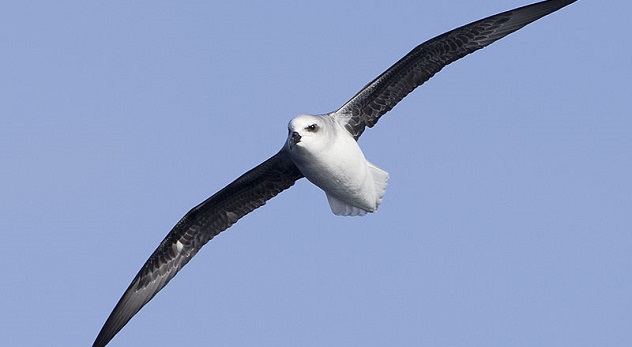 Now, these cute reptiles are impressive in terms of evolutionary history, physiology, and breeding habits, but they also have a rather interesting lifestyle. Because they inhabit such a small geographical area, food is rather scarce. This is why the adults will eat mostly anything small enough to hunt, including their own offspring. However, nature designed the adults to be nocturnal, whereas the juveniles are diurnal. This helps minimize cannibalistic encounters.

Also, adult tuataras are often seen sharing burrows with nesting seabirds. Typically, birds get alarmed when creatures venture too close to their nests, but tuataras are some of the best roommates they could possibly have. These reptiles are territorial and bite whatever intruder ventures onto their turf. Furthermore, the guano from the bird nests draws animals that the tuatara enjoys eating.

Sadly, there is a downside for the birds. Occasionally, tuataras might turn to the bird eggs or hatched chicks for additional nutrition. Fortunately for the birds, this doesn’t happen very often. 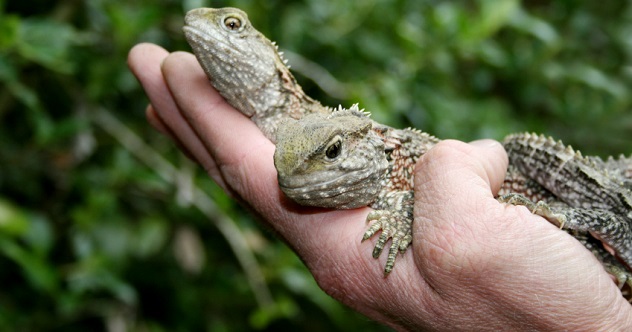 While the tuatara certainly looks normal, the native tribes of New Zealand weren’t fooled by its ordinary appearance. In these cultures, people are normally forbidden from harming tuataras or their nests. Serious consequences are reserved for those who don’t respect these rules. Violators are supposedly punished by nature’s spirits.

In Maori tribes, women sometimes tattoo images of the tuatara near the genital area, as the reptile is a symbol of the sacredness of reproduction. Tuataras also bear the status of taonga in Maori, which translates into “treasure.” These reptiles are said to be the messengers of Whiro, the god of death and disaster, which strengthens the awe and respect reserved for this animal.

Until recently, the 5-cent coin in New Zealand depicted the tuatara, but the coin was phased out in 2006. It seems that New Zealanders take the tuatara quite seriously, especially when it comes to keeping this creature safe.

Like many native creatures of New Zealand, the tuatara is extremely endangered, largely thanks to damage caused by introduced species such as rats and mice. Currently, the creatures live on 32 islands, all of which are quite difficult to reach. Additionally, the reptiles are forced to deal with hostile terrain, strong winds, and a minimal amount of fauna.

Tuataras once existed on the main islands of the New Zealand archipelago, but they disappeared before the arrival of white explorers. The current population is estimated to be somewhere between 60,000 and 100,000. For an animal this size, that number is quite small.

Given its unique status as a one-of-a-kind species, protection measures are quite harsh, and these animals have been protected since 1895. Many of the islands inhabited by tuataras are completely forbidden to visitors, except for the experts who study them and help them breed.

Lately, attempts to recolonize the New Zealand mainland with tuataras have met with some degree of success. Numerous programs breed tuataras in captivity or relocate entire populations so their odds of survival might be improved. Extensive efforts have also been made to exterminate predatory rats in some of the islands. Overall, despite its endangered status, there’s a lot of hope for this unique species, given the ample efforts made for its preservation. 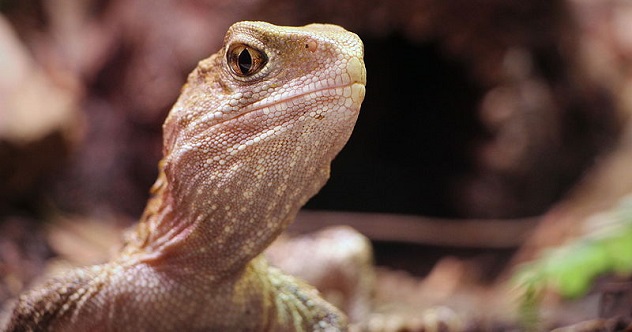 Not long ago, scientists made a pretty shocking discovery about the tuatara. While this animal has been less than keen to evolve, researchers found it was actually the fastest-evolving creature to date. Although it hasn’t changed its looks for many millions of years, DNA analyses have shown that this reptile can evolve faster than other vertebrates.

However, we’re talking about molecular evolution, or more specifically, the evolution of its DNA. This translates into changes in the sequence compositions in DNA, RNA, and proteins across generations. This discovery was made by comparing genetic material from living tuataras with 8,000-year-old tuatara bones, thus highlighting the changes in DNA remains.

Now, this doesn’t mean the animal adapts more quickly or can suddenly change like a Pokemon. Whether the changes in nucleic acids manifest into physical adaptation is another subject for discussion. And in the tuatara’s case, physical changes have not been the priority for some 200 million years.

Tuataras are some of the weirdest, most interesting animals on the planet. Hopefully, our efforts to protect them will ensure the survival of the species, thus allowing these animals to amaze us in the future with other outstanding adaptations.

Kyle loves biology, and he’s also very fond of paleontology. He hopes to visit one of the great museums of natural history in Europe soon.