Whether we visualize aliens as ray gun-toting invaders or peace-loving geniuses, we are fascinated by whether they exist and how they might finally contact us. It seems that scientists are no different.

From alien megastructures to space tractors, here are some of the more bizarre ways scientists have theorized that aliens are likely to contact humans.

The mysterious monolith in the movie 2001: A Space Odyssey turned out to be an alien machine designed to observe species and trigger evolutionary behaviors. Some scientists have argued that alien megastructures could be acting as a giant beacon to other civilizations.

In fact, scientists have been closely watching the star KIC 8462852, whose luminescence has mysteriously varied over the past few years. Some argue that the star is surrounded by an alien megastructure that occasionally blocks light coming from the star. Other, less exciting explanations are a swarm of exoplanets or a planet-forming disc. Scientists have searched for brief laser pulses from the distant star, but have yet to find any.

“The hypothesis of an alien megastructure around KIC 8462852 is rapidly crumbling apart,” said Douglas Vakoch, president and author of SETI (Search for Extraterrestrial Intelligence) International. He also stated, “We found no evidence of an advanced civilization beaming intentional laser signals toward Earth.”

Astrophysicist Ragbir Bhathal works with SETI to scan the skies for possible communications from extraterrestrial intelligence. Unlike most SETI facilities, which look for radio signals, Bhathal’s facility looks for laser pulses at his lab. The pulses sweep a nearby volume of space—within about 100 light-years—to find laser bursts that come in regular patterns. Scientists are now capable of detecting signals as faint as a single photon of light every few fractions of a second.

Lasers can, in principle, help transmit messages over extraordinary distances. While scientists have monitored a large number of stars looking for alien laser signals—like the facilities at Harvard and Princeton that scanned more than 10,000 Sun-like stars for several years—no evidence for any alien communication has been found. 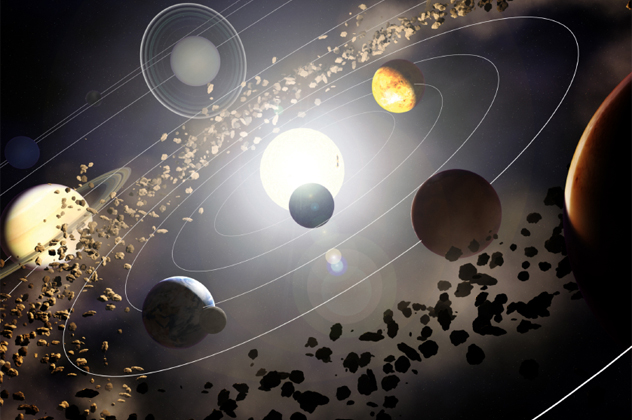 Perhaps alien signals aren’t traveling in electromagnetic waves at all. Instead, signs of intelligent life may be very small objects sent out to explore the universe. After all, we have sent out probes to planets such Mars, Saturn, and Venus. Mathematicians in Scotland have suggested that “self-replicating” alien probes could have already explored our solar system and may still be here, but are undetectable to our inferior technologies.

The robotic probes could explore our galaxy and self-replicate themselves from interstellar dust and gas. Afterward, the parent and child probes would each set off for a different star, where they would look for signs of life and self-replicate themselves again. Doctors Nicholson and Forgan concluded that a fleet of these probes could explore the entire galaxy in the relatively short time of 10 million years.

Dr. Forgan said that the fact that we have not detected or seen any evidence of alien probes in the solar system suggests either that there have been no probe-building civilizations in our neighborhood in a few million years or that the probes are so hi-tech we are unable to observe them. Another possibility is that we are failing the aliens’ intelligence test by not detecting the probes.

7Radio Waves From Far Away

For years, mysterious blasts of radio waves coming from billions of light-years away have stumped our scientists. Lasting only several thousandths of a second, the blasts, called fast radio bursts, have appeared randomly in the sky. Scientists haven’t been able to figure out what these blazing bright bursts actually are. Alternately, they have suggested that the culprits could be evaporating black holes, colliding dense objects, or flaring dead stars.

After studying how the incoming radio waves from a newly detected burst were twisted and scattered, a team of scientists have uncovered some crucial clues about the blast’s origin: It originated far away, in an area with dense, highly magnetized plasma, and it traveled through two gas clouds before colliding with the Green Bank Telescope in West Virginia.

Now, astronomers suspect that flaring magnetars (magnetic stars) might also emit radio waves and could be the culprits behind fast radio bursts. “It’s very exciting,” says Duncan Lorimer, the astronomer at West Virginia University who discovered the first fast radio burst in 2007. “We are definitely moving further forward to solving the mystery.” 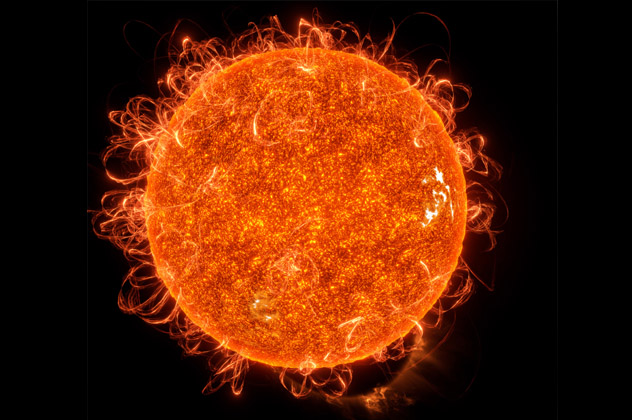 Not all aliens may be looking for other creatures in the universe. Theoretical physicist Freeman Dyson has argued that even shy aliens might develop technology to siphon energy from a nearby star using an orbiting object known as a Dyson sphere. If humans were to collect all of the Sun’s energy, we would probably use some form of Dyson sphere.

Freeman J. Dyson first explored this idea as a thought experiment in 1960. He proposed that searching for such structures might lead to the discovery of advanced civilizations elsewhere in the galaxy. These Dyson spheres would throw off waste heat in the form of infrared radiation. Already, researchers at the Allen Telescope Array and the Wide-field Infrared Survey Explorer (WISE) space telescope are scouring the skies for signs of such waste radiation. 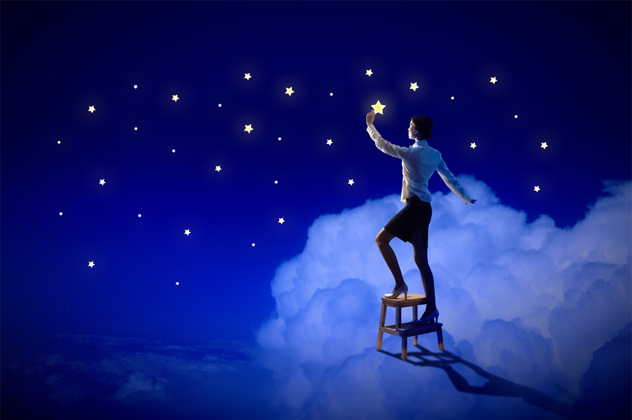 Jaron Lanier suggested that it was time to start thinking about repositioning the Sun and other nearby stars in order to send signals to aliens. After that, we should begin to search for signs that suggest aliens might have done the same for us.

In fact, when neutron stars were discovered, scientists thought they might be messages from “little green men.”
Lanier suggested sending a significant number of “tractor” spacecrafts over many years into the outer solar system. The spacecraft would be programmed to operate for hundreds of thousands of years, with their gravitational pull diverting solar objects.

The point of moving stars around is to guide them into orbital formations that would not have occurred naturally. A group of stars organized to present a sign in this way might be called a “graphstellation”—like a constellation, but also a form of writing. This message would say “Hey, we are here.”

4Needle In A Haystack 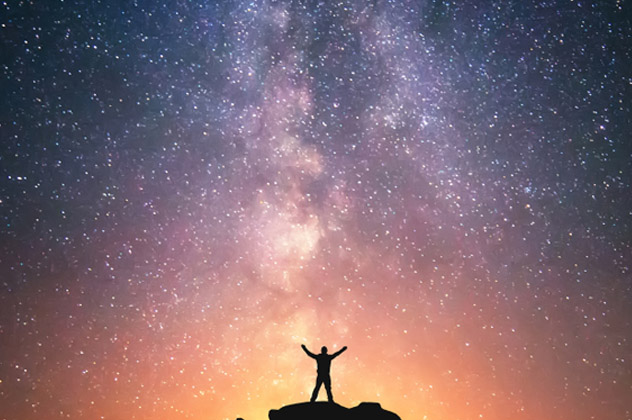 Even if aliens are trying to make contact, there’s no guarantee we would receive their messages. The universe is 91 billion light-years across, and messages could come from anywhere. To narrow the search, some argue that aliens would be more likely to send messages our way if they knew where we were. A study published in February 2016 found that there are only 82 stars that we know of that have a direct line of sight to Earth.

Heller and his colleague, Ralph Pudritz at McMaster University in Hamilton, Canada, predicted that there might be up to 100,000 stars within this zone of the sky—some of which could have planets teeming with life orbiting them. One advantage of this approach is that this tiny slice of sky is relatively easy to search.

“You could just skim or scan the whole Earth transit zone over the course of maybe a few dozen nights or so, depending on how large the field of view of your radio telescope is,” Heller told Live Science. If these hidden exoplanets harbor life, they’d also be in the same galactic neighborhood . . . just a few hundred light-years away.

3Destruction Of An Alien Planet 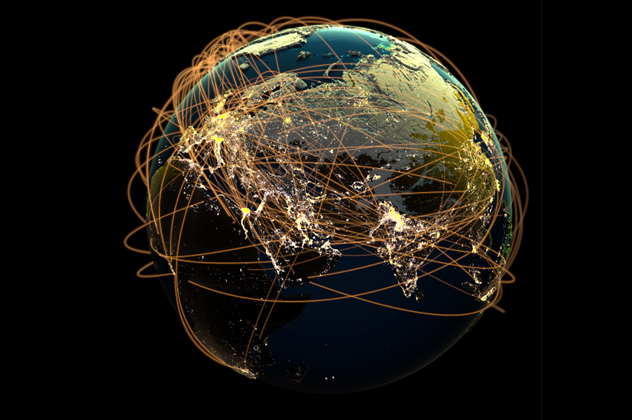 One of the ways we may be able to spot alien civilizations is through the destruction of their own planet, says Dr. Nathalie Cabrol, who is leading the hunt for alien life at the SETI Institute in California. “There is a window in time when you can expect a civilization to get to this disequilibrium as we are in now. During this time, you will find signatures in the atmosphere of a planet that shouldn’t be there.”

Cabrol’s views echo that of the former astronaut, John Grunsfeld, who earlier this year said, “If there is life out there, intelligent life, they’ll know we’re here.” He believes advanced alien civilizations may spot humans from afar due to the changes we’ve made to Earth’s environment. At the Astrobiology Science Conference in Chicago, he stated, “We put out atmospheric signatures that guarantee someone with a large telescope 20 light-years away could detect us.” 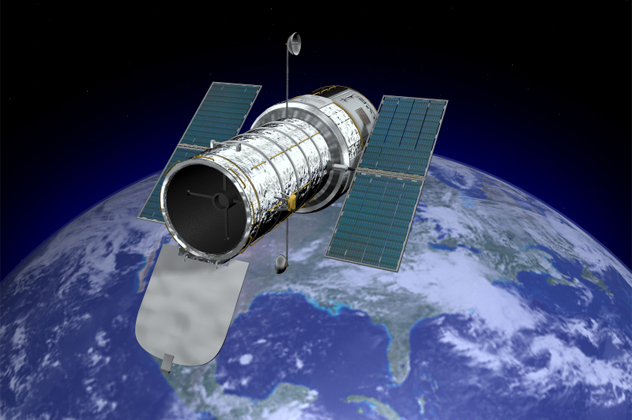 Researchers from NASA’s Space Telescope Science Institute (STScI) used observations from telescopes, like the Hubble and Kepler, to calculate that Earth is only in the first 8 percent of all Earth-like planets that will ever form. The other 92 percent of Earth-like planets haven’t even been formed yet. Author Peter Behroozi said, “Compared to all the planets that will ever form in the universe, the Earth is actually quite early.”

Because it is so early, the researchers think it is highly unlikely that ours is the only planet that will ever develop intelligent life. In the paper, Behroozi and his co-author, Molly Peeples, wrote, “The Earth formed before 92 percent of similar planets that the universe will form. This implies an 8 percent chance that we are the only civilization the universe will ever have.” Those are pretty good odds to say that we aren’t alone. We might just need to wait a few billion years to make sure.

1Find A Clone Of Our Sun 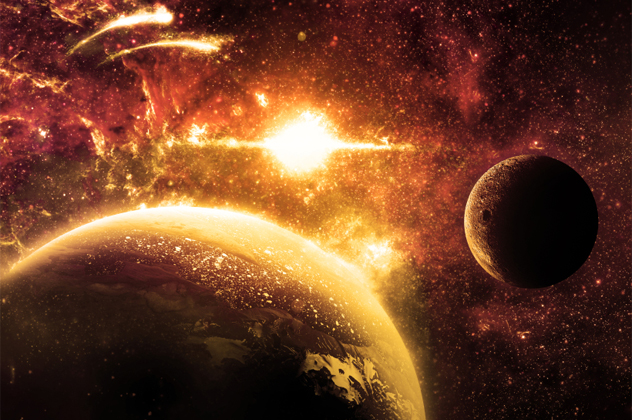 In 2012, astronomers discovered HP 56948, the Sun’s “clone,” only 200 light-years away. The chemical composition of HP 56548 has unusual amounts of aluminum, calcium, magnesium, and silicon—the same ratio as our Sun. However, the system may not have an Earth-sized planet in its habitable zone. Even if there is one, it may not have the right chemical ingredients for life, such as water and carbon. And, even if there is a flourishing world with life forms, it may not have progressed to an intelligent species.

If it takes four billion years for intelligent beings to emerge, and if there is an Earth-like planet, then a civilization should be orbiting HP 56548 right now.

Full-time freelance copywriter, mother, and cat wrangler. You can chase down my blogs here (I would love if you would), track me on Twitter, or find me on Facebook.