The laser was invented in 1960. Since then, the iconic beam has advanced science tenfold. But when lasers go over to the dark side, things get strange and even scary. They whisper messages in people’s ears, there are now contact lenses that shoot laser beams and also plasma balls that set the enemy on fire. Astronomers also feel that future threats to Earth might include aggressive aliens. While they plan to use lasers to cloak the planet, nobody knows how to deal with a current problem – the mysterious beams that attack hundreds of pilots every year.

SEE ALSO: 10 Weirdly Disgusting And Creepy Facts About You 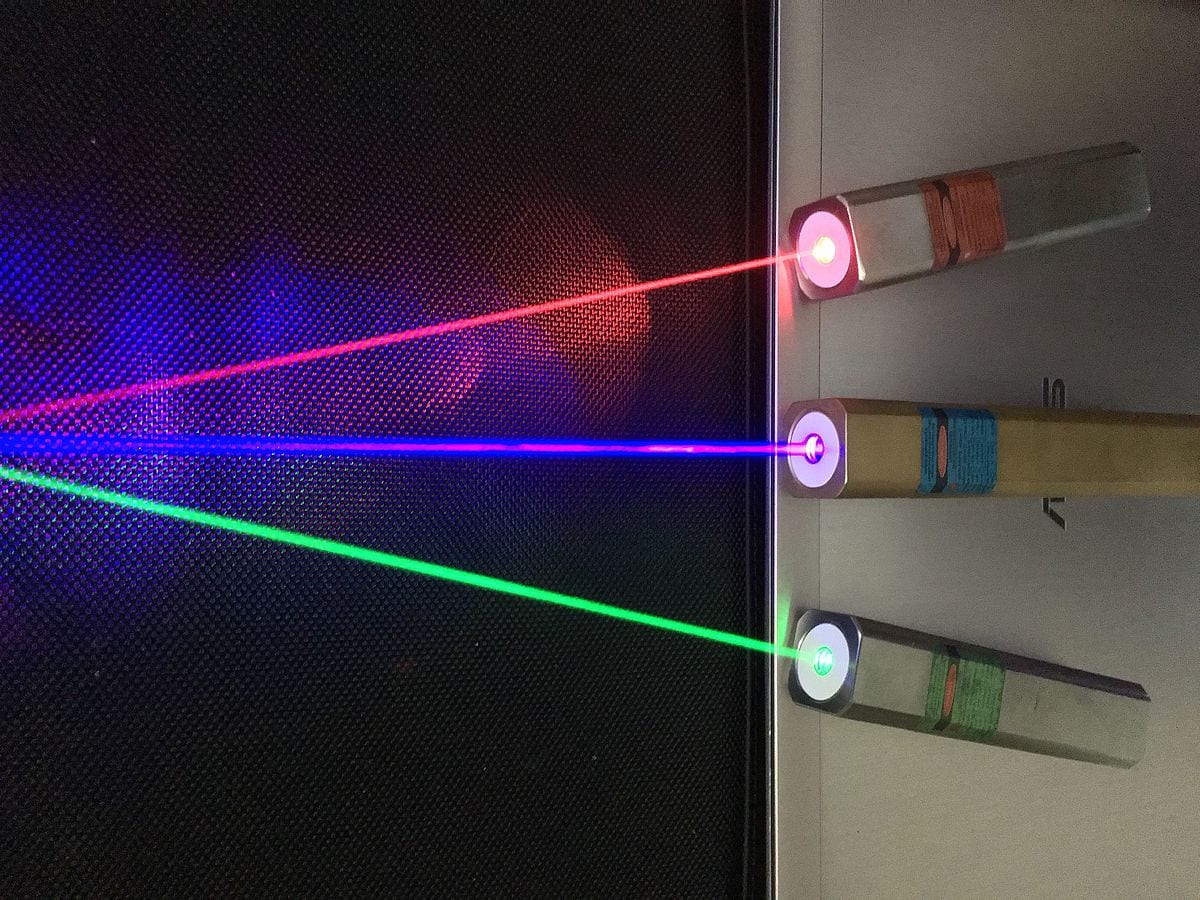 Laser pointers are nifty devices. They point out information during presentations and make the speaker look cool. Unfortunately, these pointers also end up in the hands of children. When kids get together and have something that shines a beam, eventually they will point it at somebody’s eyes as a joke or look at the light themselves. The results are terrible.[1]

In 2018, a Greek boy played with a pen that belonged to his father. The 9-year-old was fascinated by the green laser and repeatedly stared into it. Some time afterward, he told his parents that he struggled to see out of the left eye. A visit to the doctor confirmed that the device had burned a hole in his retina and caused two additional areas of damage nearby. Together, the scorched tissue created a blind spot at the center of his vision. All hope for a full recovery disappeared when 18 months went by without any improvement.

Despite that retinal trauma from pointers are rife and that several countries have a limit on their strength, varying between 1mW and 5mW, sales appear to be unregulated. Anyone can buy these laser pens online or from street vendors. In 2015, a guy ordered a pointer that violated the 5mW limit with an epic strength of 50mW. For some reason, he shone it in his brother’s eyes for a second. One second was enough to cause irreversible damage. 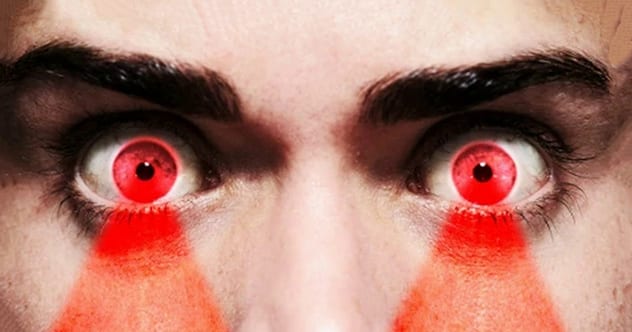 In 2018, scientists purchased a cow’s eyeball. They needed something similar to a human eye to test a contact lens and the bovine version was a close match. There was a reason why they could not first test their invention on a living person. The thing shot lasers. Indeed, the cow’s eye successfully produced beams during the experiment.[2]

The contact lens was not a high-tech weapon. The laser was exceptionally weak and could not damage any living tissue, although the team did not want to take chances with a human eye. Instead, the researchers designed the flexible film for identity purposes. It worked like this. First, a special material was forged by pushing nanoscale gratings into polymer membranes. The resulting film was so thin that a stack of 1,000 would measure 1 millimeter high.

These membranes can easily fit into things like contact lenses, security tags, bar codes, and banknotes. All it takes is to scan the object with a laser. This triggers the internal film to produce its own laser in return. The light’s wavelength signature can be tweaked to be unique or to behave like a barcode by adjusting the gratings’ material and structure. Such a signature would be recognizable by the scanner and very hard to forge.

6 Lasers Could Tear Up Nothingness There are two ways to increase a laser’s strength. You either shorten its pulses or increase the energy of the laser. Physicists nurture their projects in different ways, but laser lights are getting stronger. In 2016, a laboratory in Shangai created the most potent beam ever recorded. The Chinese team created pulses of light that were so short that each lasted about a trillionth of a second. However, they proved that small things can be dynamite. The pulses registered an epic 5.3 petawatts (PW), or 5.3 million billion watts.[3]

In 2018, the facility was upgraded to reach the dream of creating a 100-PW laser. If all goes well, by 2023, the laser will zap targets in an underground chamber. The pulses could subject materials to extreme pressure and temperatures not found on Earth. While this is wonderful news for scientists wanting to learn more about space, where such pressure and temperatures abound, researchers are mainly after a weird phenomenon. At the moment, it remains theoretical and is called “breaking the vacuum.” This event describes light tearing both electrons and positrons (the antimatter counterpart of electrons) from empty space. If the 100-PW laser succeeds, it would basically be ripping apart nothingness. Not to be outdone, Russian physicists are working on a 180-PW laser. 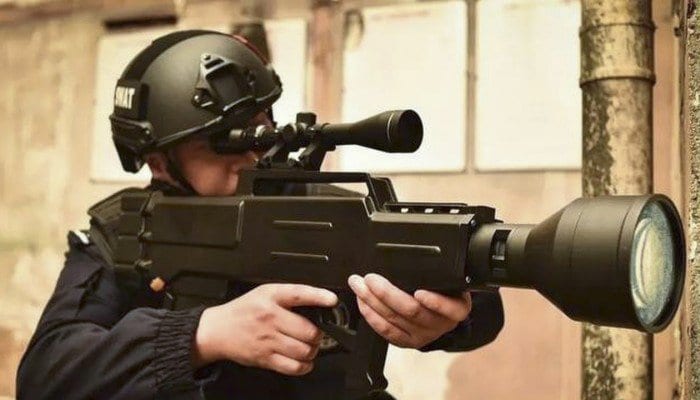 In 2018, a newspaper revealed the existence of a deadly weapon. The South China Morning Post claimed that a Chinese company, ZKZM Laser, developed an assault rifle. It made all other assault rifles look like candy bars. Called the ZKZM-500, it allegedly fired lasers instead of bullets. The rifle could discharge around 1,000 shots of invisible beams, each lasting roughly two seconds.[4]

Here is where it gets scary. This “laser AK-47” was said to be capable of hitting a human target from 800 meters (half a mile) away and set clothing on fire. One anonymous researcher working on the project also said that a direct hit caused “instant carbonization” of human flesh, causing unbearable agony. How this barbeque-flavored fact was discovered is best left to the imagination. ZKZM-500 could even shoot through closed windows.

If true, the technology would be as remarkable as it is terrifying. However, several scientists scrutinized the rifle’s details and they fell short of the truth bucket. The newspaper claimed that the weapon weighed 3 kilograms (6.6 pounds) and had a lithium-ion battery. However, the rifle’s properties required a weight of up to 90 kilograms (200 pounds) and a lithium-ion battery could not power 1,000 devastating shots at 800 meters.

This distance and the shooting-through-glass claim further weakened the belief that ZKZM-500 really exists. A laser’s intensity is reduced the further it goes forward and also when it passes through a medium, like glass or gas. Calculations showed that by the time the beam had traveled 800 meters, it could not fry an ant. With or without the window. 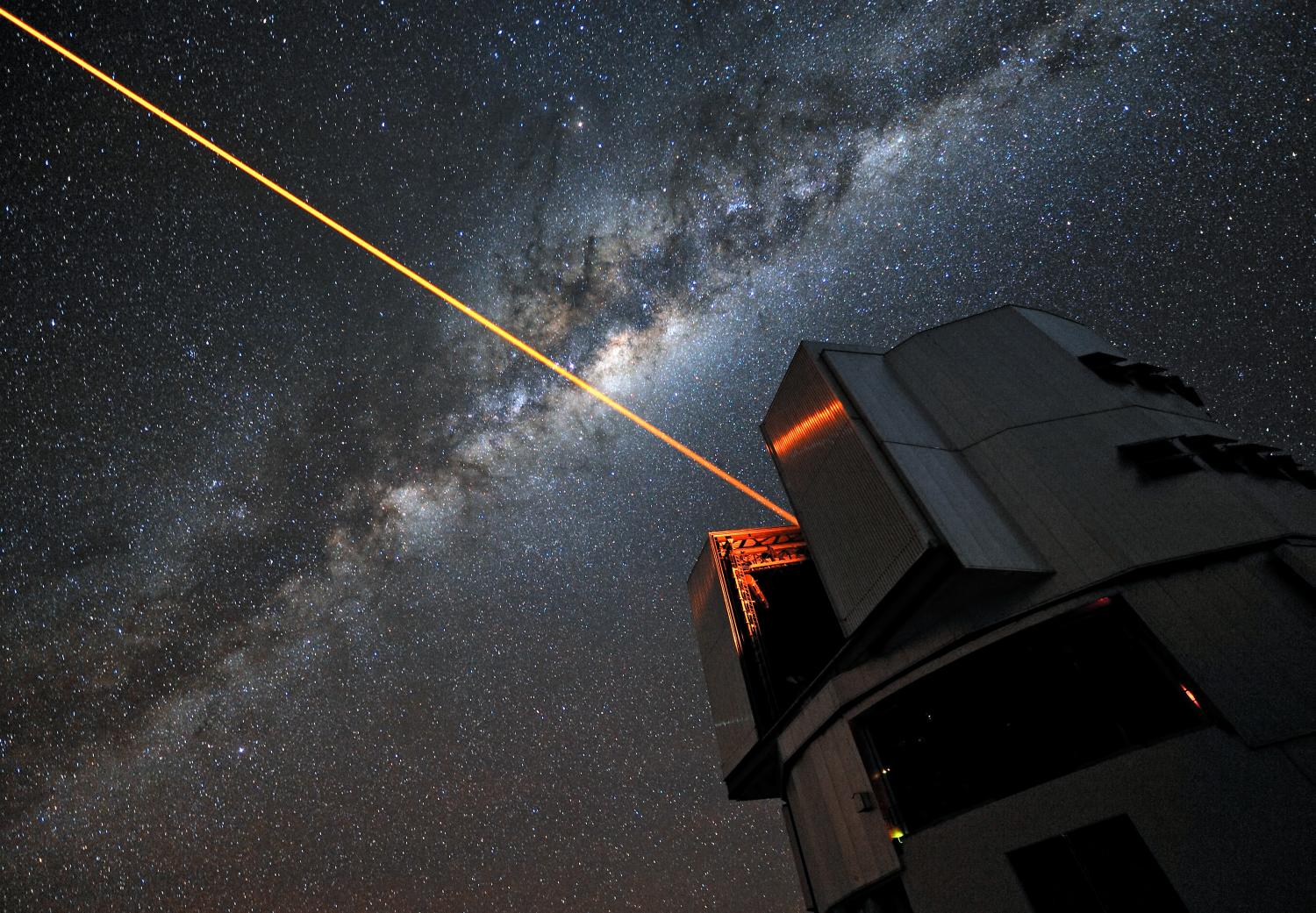 The search for extraterrestrial life is no longer a joke. Scientists are seriously considering that aliens could exist. However, many believe that humanity should stop advertising itself. This cautionary group included Stephen Hawking.[5]

Should we attract the attention of a race capable of both detecting our signal and to travel the distance, chances are that they are leagues ahead with technology, weapons, and attitude. Researchers have likened this situation to the disastrous arrival of the Europeans in the Americas. Likewise, aliens could mine Earth’s resources, commit atrocities and even spread diseases humankind has no resistance against.

In 2016, a pair of astronomers at Columbia University suggested that lasers could shield the planet from space marauders. Should other civilizations look for habitable planets in a way similar to our scientists, they would search for transits. This is when a star’s light dims as a planet orbits in front of it. They would understand that some planets are in their star’s “habitable zone,” with temperatures ripe for water and life. The Columbia researchers said that Earth’s transit could be masked by switching on a powerful laser to substitute the dimming light as the planet passes in front of the Sun. On the downside, this would only work if the laser is directed at the aliens’ own home star and nobody knows where that is. 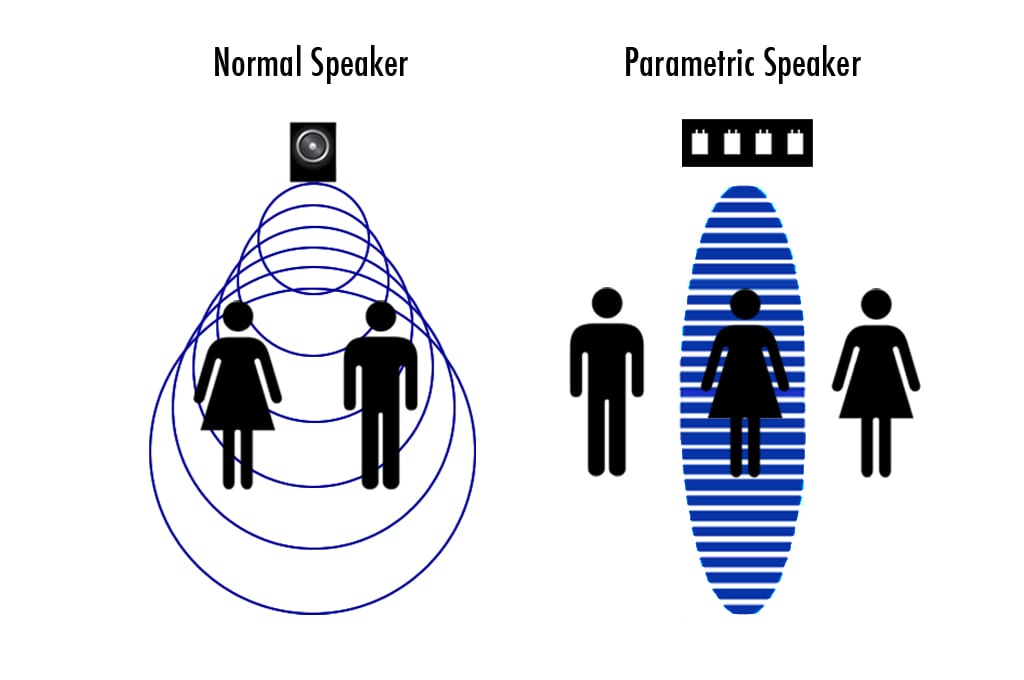 In 2019, MIT took the concept of doing bizarre things with lasers to a whole new level. They invented a system that can send whispers to a person. Even eerier, the transmission is inaudible to everyone else around them. The developers said that there is no danger involved. In fact, this is the first laser system that is harmless to human skin and eyes. While it may be safe, the whole idea of suddenly hearing a voice in one’s head remains disconcerting.[6]

The technology can even be used in a noisy setting, like a public place, to deliver a message to someone. One day, this could prove useful for personalized advertising – as if those ads and mail based on the mining of one’s personal information are not annoying enough. The military applications are also clear.

The whole thing sounds incredibly complicated but the process is easy to understand. To localize the message, so only the target can hear it, a thin laser is directed at the ear. More precisely, at the water vapor in the air near the person’s ear. The vapor then vibrates with the laser’s emission at an audible frequency. Message delivered. However, the system is not perfect. It cannot function from just any distance that the researchers want. At the moment, whispering lasers can only work from a few meters away. Moving the system closer creates an uncomfortably high pitch. Move it back any further and the sound disappears.

2 A Plasma Ball That Screams

To kill an enemy soldier is easy. There is a legion of weapons and tactics available to choose from should you desire to wipe somebody off the face of the Earth. What is proving to be exceptionally difficult is to incapacitate a storming horde without sowing death like confetti.[7]

The U.S. Department of Defense (DoD) has a wing dedicated to preventing casualties among the enemy. This branch is burdened with the long title of the Joint Non-Lethal Weapons Development Program (JNLWD), but it produces novel ideas. In 2018, the program designed something mind-boggling. Weighed down with an equally heavy name, it was called the Non-Lethal Laser-Induced Plasma Effect (NL-LIPE) system.

Like the name suggests there are plasma and lasers involved. In this case, plasma forms when electrons are removed from air molecules. When activated, NL-LIPE shoots a beam that creates a plasma ball at the required location. For instance, in front or between approaching hostiles without putting your own people in danger of being stunned. An operator then deploys a second laser that makes the plasma do eerie things. The ball can flash and even burn clothing. The most creepy option is to make the plasma scream, a sound that is disturbingly similar to a human’s voice. 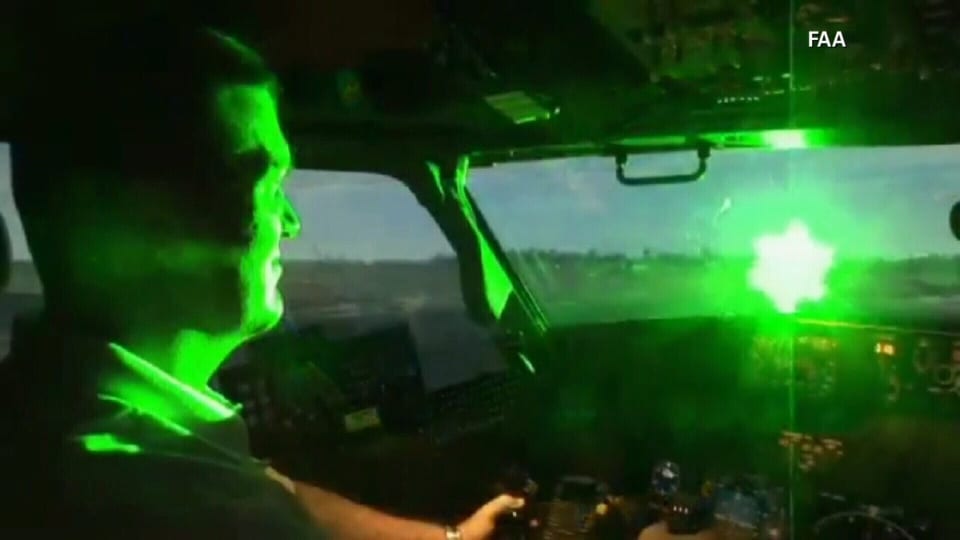 In 2016, a Virgin Atlantic flight left London. The passengers were bound for New York but only made it as far as the coast of Ireland. At that point, the plane turned back and landed at Heathrow airport in London. The reason was worrying. The first officer had fallen ill after a “laser beam incident,” as a Virgin Atlantic spokesperson called it.[8]

Although details were sparse, the officer probably experienced a beam being shone into the cockpit from an unidentified location. This is an educated guess based on thousands of previous incidents where more information was given. For some bizarre reason, aircraft in the United Kingdom are the target of people shooting lasers at pilots.

The trend started out with only 20 reported cases in 2005. According to the Civil Aviation Authority, things rapidly escalated. From 2010 to 2014, each year saw over 1,300 of the disturbing attacks. One of the most serious incidents occurred in 2015. A British Airways pilot was in the process of landing at Heathrow when a laser shot into the cockpit. He described it as a “military-strength” laser and the event reportedly damaged the pilot’s vision. Thus far, nobody has solved the mystery. The reason for the attacks remains as unknown as the location that the lasers are coming from.


For more creepy and disturbing facts, have a look at 10 Creepy Facts About Body Farms, The Graveyards Of Science and Top 10 Scary Facts And Stories About Marijuana.
Share
Tweet
WhatsApp
Pin
Share
Email