Academically, science exists to help us understand our humanity, our environment, our world, and our universe. Pragmatically, it exists to help us solve our problems. Many challenges, such as how to cure diseases, have been solved with the help of science.

It’s for this reason that every time we face new obstacles, such as climate change and pollution, we often turn to science for answers. Most of the time, the solutions given by scientists are sensible and effective. However, there are cases when their proposals are just plain absurd. They make you want to blurt out, “Are they serious?”

10 A Man-Made Mountain In UAE

The United Arab Emirates (UAE) is known all over the world for having the world’s tallest skyscraper—the 820-meter-tall (2,700 ft) Burj Khalifa. However, if a scientific proposal is adopted by the UAE government, this Middle Eastern nation could become famous for something else—a man-made mountain.

This idea might sound ridiculous, but it’s backed by science. With the UAE situated in an arid region, the creation of an artificial mountain may end the country’s water problem. A man-made mountain could promote cloud formation. Then these clouds could be seeded to stimulate rainfall.

In theory, this proposal could work. However, according to Roelof Bruintjes, a weather modification researcher from the University Corporation for Atmospheric Research, building such a mountain is next to impossible.

For one thing, where will the builders get the raw materials to create such an enormous structure? In addition, having an artificial mountain may aggravate the problem instead of solving it. A man-made mountain could promote rainfall in some areas, but the land on the other side of the artificial structure may become even drier.

How Scientists Are Preparing Earth for an Incoming Asteroid | WIRED

One of the most effective ways to solve global warming is to shade the planet from the Sun’s heat. This solution might sound simple, but it’s incredibly difficult to implement in real life.

Many versions of shading the Earth from the Sun have been proposed. But perhaps nothing is as crazy as the one suggested by Scottish scientists—blasting a giant dust cloud off an asteroid into space. If this crazy proposal works, it could dramatically cool down Earth.

But as you can imagine, implementing such an out-of-this-world solution entails certain concerns and risks. For example, how will scientists capture a massive asteroid? Does the technology to accomplish this even exist?

Also, even if scientists manage to capture a large asteroid, its proximity to our planet could lead to devastating consequences. Finally, this crazy proposal might work on paper, but there’s no guarantee that it will work in real life. Scientists don’t have the means to test its effectiveness on a large scale before implementing it. 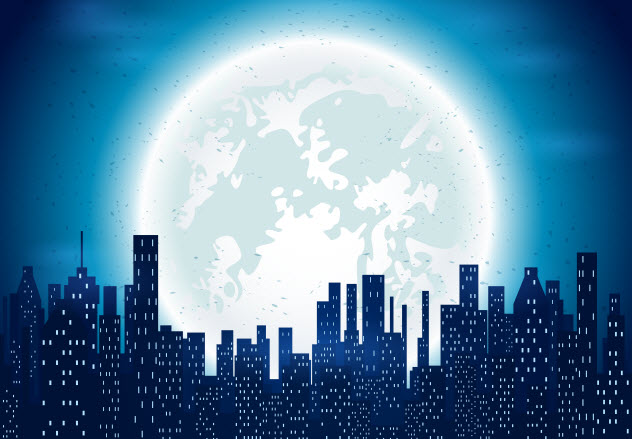 Most solutions to climate change involve the Sun. But a new scientific proposal suggests shifting the focus from the Sun to the Moon. To reduce climate change, scientists propose making the Moon brighter.

Lightening the Moon’s surface could theoretically reflect more sunlight onto Earth, which could lead to less power consumption at night. Experts hope that this artificially induced phenomenon could lead to fewer carbon emissions.

After this proposal was made public, it was heavily criticized by the scientific community. For example, Alan Robock, a climatologist from Rutgers University, pointed out that making the Moon brighter could potentially make climate change worse. He emphasized that increasing the Moon’s reflectivity could increase Earth’s temperature.

Aside from these criticisms, the proponents of this absurd proposal also need to address several issues, such as the type of materials to use to make the Moon brighter. In addition, night light exposure can also lead to a few unpleasant side effects for human health.

Glaciers cover only 10 percent of Earth’s surface, but they contain 75 percent of the world’s freshwater supply. Over the past decades, these massive rivers of ice have been melting dramatically. If these glaciers continue to dissolve, then coastal cities, such as New York, could potentially disappear.

To prevent glaciers from further liquefying, Jason Box, a glaciologist from Ohio State University, proposed a bizarre solution—wrap glaciers in blankets that would reflect the Sun’s heat. Box came up with this idea after conducting several expeditions to Greenland since 1994.

In 2009, Box and three other scientists returned to Greenland to test his “reflective blankets” theory. For this experiment, the researchers used 31 giant rolls of white polypropylene blankets, which can cover a surface area of 10,000 square meters (108,000 ft2). They were designed to block out wind and reflect the Sun’s rays.

Although covering Greenland’s glaciers in reflective blankets would be expensive, Box believes that his proposal is much cheaper than making massive changes in coastal cities affected by rising sea levels.

For some strange reason, many scientists are obsessed with the idea of creating and launching a structure into space that will reflect some of the Sun’s heat rays, thereby cooling Earth significantly and solving global warming.

In 2002, Star Technology and Research, a space consulting firm, proposed the crazy idea of a network of steerable space mirrors designed to orbit Earth’s equator. The proponents of this crazy scientific proposal claimed that the space mirrors could lower Earth’s air temperature by as much as 3.0 degrees Celsius (5.4 °F).

However, this ambitious claim was refuted by the Max Planck Institute for Meteorology. Their study showed that space mirrors might generate harmful consequences instead of solving global warming. Although space mirrors could reflect some of the Sun’s heat rays, they could also lead to several unintended outcomes, such as cooler tropics but warmer poles, reduced rainfall, and an uneven decrease in global temperature.

Thankfully, this scientific proposal was never undertaken. Even if the government decides to fund this absurd idea, the technology needed to create space mirrors does not exist yet. 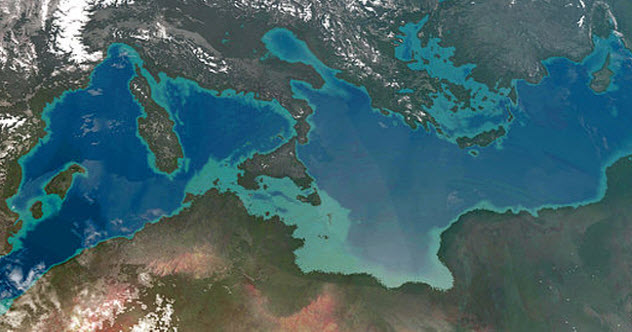 During the early 1900s, Europe was beset with energy problems, unemployment issues, and intercountry conflicts. To solve these problems, German architect Herman Sorgel proposed an out-of-this-world solution: Dam the Mediterranean.

Sorgel was a hydropower enthusiast, and he believed that damming the Mediterranean could create a significant energy source for Europe and Africa. He also believed that embarking on this ambitious, extremely expensive project would foster peace among European nations because their leaders wouldn’t have any money left to engage in wars.

In 1952, Sorgel died, which led to the demise of his ambitious but noble proposal. Although Sorgel’s idea was imperfect, unrealistic, and impractical, the intention behind it was commendable. He believed that we could only solve the problems that beset us and achieve genuine lasting peace by working together. 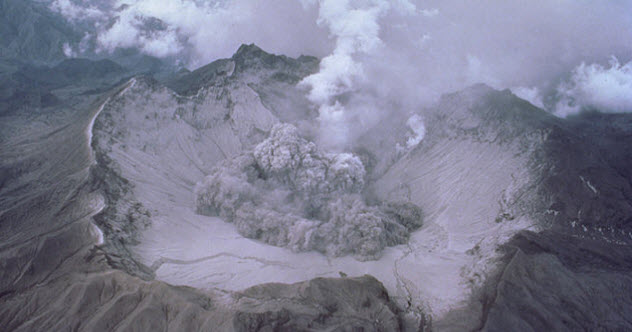 In 1991, a volcano in the Philippines called Mount Pinatubo erupted. Although this natural calamity greatly devastated the Southeast Asian country, it had a surprisingly positive effect on the entire planet by momentarily reducing the effects of global warming.

Unlike the UAE’s plan for an artificial mountain, scientists do not suggest creating a literal man-made volcano. Instead, they want to mimic the effects of a volcanic eruption. This can be done by using a fleet of business jets to release sulfuric acid into the atmosphere.

This sulfuric acid would combine with water vapor to form a substance known as fine sulfate particles. These artificially produced sulfate particles would then be capable of reflecting the Sun’s heat rays, which would reduce global warming.

Creating a fake volcano might seem like an effective and feasible solution to global warming, but it’s ridiculously dangerous. For example, fine sulfate particles could potentially lead to air pollution deaths. They could also lead to the deadly bleaching of fertile coral reefs and the ripping apart of ozone molecules in the atmosphere.

This scientific proposal merely masks the symptoms of global warming. It’s like perfuming a skunk.

3 Tiny Diamonds In The Atmosphere 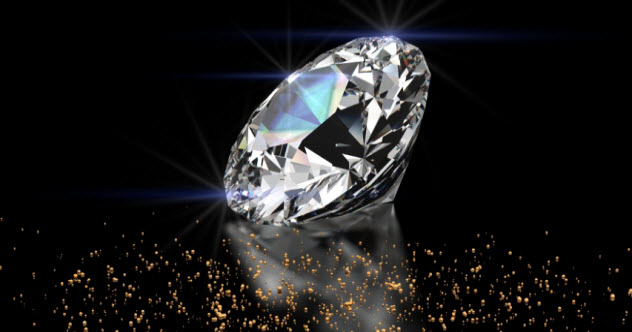 When we hear the word “diamonds,” we almost immediately think of jewelry—necklaces, rings, earrings, etc. Never does the thought of global warming cross our minds. But now a team of Harvard scientists is suggesting a new use for this valuable gemstone.

As you can imagine, releasing diamond dust into the sky is extremely expensive. The Harvard scientists estimate that it would take hundreds of thousands of tons of diamond particles annually to make any significant change to Earth’s rising temperature.

Even though synthetic diamond dust is now sold at less than $100 per kilogram ($45/lb), it would still require billions of dollars each year to fund this crazy scientific proposal. Aside from the cost, scientists have not fully determined the risks associated with the presence of diamond dust in the atmosphere. 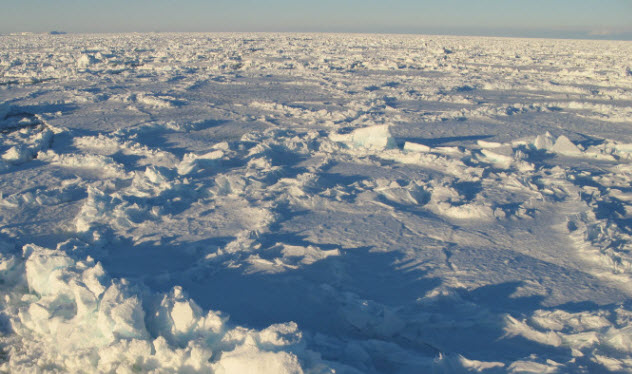 Scientists predict that sea levels will rise up to 3 meters (10 ft) in the next two centuries. This estimate is based on the assumption that humanity will be able to reduce global warming by at least 2.0 degrees Celsius (3.6 °F).

To address rising sea levels, a team of German scientists and engineers has suggested a terrible solution—create a man-made Antarctic glacier. This crazy, ambitious goal can be achieved by pumping seawater onto Antarctica.

By creating a massive artificial glacier, the German researchers hope to reduce the rise of sea levels. However, for this crazy scientific proposal to work, seawater needs to be pumped as far into Antarctica as possible, which would require colossal amounts of energy. The proponents of this project have admitted that their suggestion “should be tucked away and saved for a worst-case scenario.”

Building a man-made glacier could theoretically solve one of the effects of global warming, but it also poses several devastating consequences. For example, in the process of constructing an artificial glacier, Antarctica’s environment and ecology could collapse, leading to the continent’s “death.”

In addition, this solution is only temporary. Once scientists stop the pumping of seawater, the massive man-made glacier will melt, leading to a dramatic rise of sea levels.

Herman Sorgel, who proposed the idea of damming the Mediterranean, isn’t the only big believer in humans working together to solve insurmountable problems. Jonathon Keats, a conceptual artist and experimental philosopher, also believes that the only way to save our dying planet, achieve genuine peace, and solve climate change is by working together. He proposes an out-of-this-world solution to achieve that: Create a new supercontinent.

By gradually moving our planet’s tectonic plates through the use of the latest geoengineering methods, Keats envisions merging all of Earth’s continents and islands into one giant landmass. He intends to call this new supercontinent Pangaea Optima.

To achieve his goal, Keats established Political Tectonics Lab, an agency that specializes in diplomatic geoengineering. In Keats’s new supercontinent, the United States, China, and Russia would become neighbors.

Theoretically, this should eliminate all the political and historical rivalries and conflicts that exist among these powerful nations. In reality, however, this could lead to greater tensions instead of that elusive world peace.