The sea is filled with weird, alien, and obscure animals. Even creatures already peculiar, such as jellyfish and sea slugs, may take on a still odder form when adapted to a unique ecological niche.

You might already be familiar with the Ctenopihores as animals called “comb jellies,” transparent invertebrates who usually use their beautiful, rippling cilia to swim through the water. Some species, however, don’t have the cilia and don’t swim at all, They slowly crawl around on the sea floor, mouth-down.

Branching into two large horns, they tend to resemble a cross between a slug and a pair of bunny ears, each horn able to extend a long, silky feeding tentacle into the water. Other, smaller species are transparent and amazingly camouflaged, while still others spend their entire lives clinging to the bodies of starfish.

The hooded or “lion” nudibranchs of the order Melibe are like the Venus flytraps of the sea slug world, their huge mouths flaring into nets lined with tooth-like sticky tentacles.

Clinging to seaweed, their transparent bodies are almost invisible to the tiny fish and shrimp who may blunder into the gaping trap. Strangely, these slugs are also said to smell like flowers when pulled from the water.

Instead of trailing long, threadlike stinging tentacles behind its swimming bell, the helmet jellyfish, Periphylla periphylla, has thicker, stiffer tentacles it holds out in front of it as it swims. These capture small fish and swing them back into its digestive cavity.

Avoiding light, they usually lurk as deep as 1,000 meters (3,000 ft) below the sea’s surface, but massive numbers of them may come to the surface at night and have even become invasive pests off some coasts. As for their dark red to purple coloration, this is believed to keep the jellyfish invisible to most predators even after swallowing bioluminescent prey. 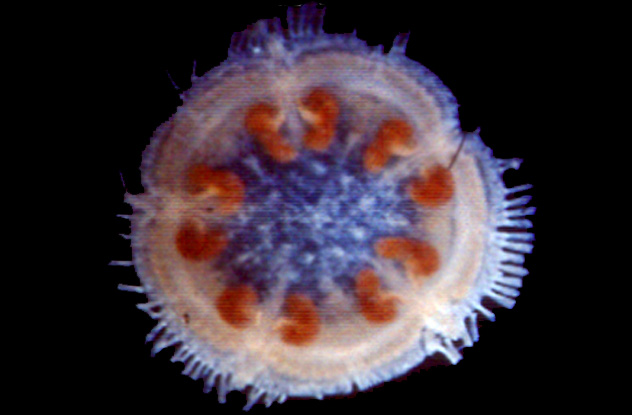 The last thing you would expect a starfish to live off of are trees, but that’s what’s going on with Xyloplax. Also called “sea daisies,” Xyloplax are tiny, saucer-shaped starfish cousins ringed with feathery spines very much resembling cartoon flower petals. They are found thousands of feet down in the black abyssal reaches of the sea.

It’s an especially strange home for an animal that feeds exclusively on wood, like a termite. However, we shouldn’t be surprised that enormous amounts of wood—from twigs snapped off in storms to entire dead trees—make their way into the ocean every day, and a great deal of it sinks to the abyss.

What is this? Pterotrachea coronata – Costa Brava

What resembles a transparent, beady-eyed sausage with a trunk on its head? It’s another bizarre species of gastropod, sometimes called a “sea elephant,” a swimming snail with a tiny, reduced internal shell.

Unlike most snails, Pterotrachea is a highly maneuverable and visual predator. Its advanced telescope-like eyeballs allow it to spot even the tiniest prey in the surrounding water, which it slurps up with that tubular trunk. If it looks upside-down, that’s because it is. Sea elephants swim around on their backs, likely allowing them to surprise their prey from below. 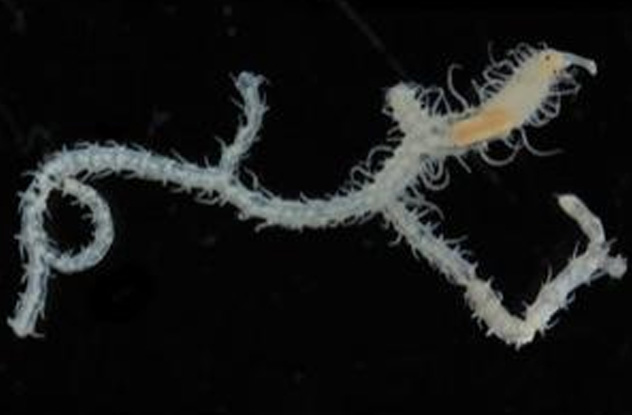 While it’s a stiff competition, the marine worm R. Multicaudata just might have one of the strangest body plans in the animal kingdom. Like a reversal of the mythological hydra, it possesses just one head, but with a seemingly limitless number of winding bodies branching off one another, resembling a network of segmented, hairy roots.

The head resides at the center of a sea sponge, while its many bodies spread throughout the holes and tunnels of the sponge host. Whether this relationship is parasitic or mutually beneficial isn’t certain, though the two creatures may offer protection to one another. 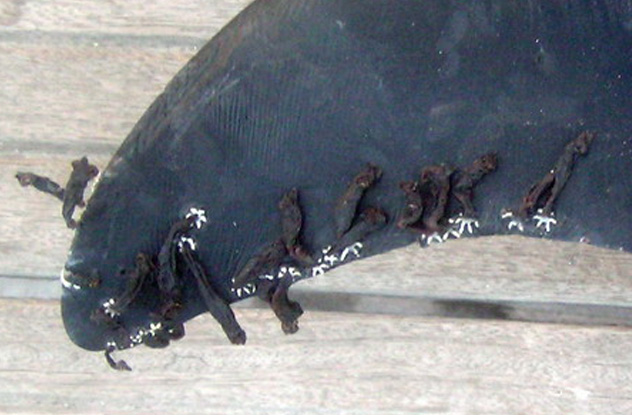 As filter-feeding, immobile crustaceans, most barnacles are adapted to grow on stationary rocks or on such large, slow-moving animals as whales and turtles. One species, however, can be found dangling from the fins of fast-moving dolphins.

Their long, slimy, leech-like bodies trail behind the host even as it leaps and dives through the water, a thickly barbed anchoring organ embedded fairly deep in the sea mammal’s flesh. Like most barnacles, it only feeds on plankton from the surrounding water, but it goes through the trouble of attaching to a dolphin for its own protection. There’s not a lot of crossover between things that want to eat barnacles and things that can catch a healthy porpoise.

We’ve seen one “jelly” that traded swimming for crawling already, but that was one of the comb jellies. The Stauromedusae are a group of true jellyfish but have given up swimming and adopted a lifestyle closer to their distant coral and anemone cousins.

What would normally be the top of the jelly’s bell is stalk-shaped, flexible, and ends in a powerful sucker, allowing the funnel-shaped creature to cling to rocks or seaweed and wave its open mouth in the water. We’ve also now seen this strategy in a slug. The stinging tentacles are bunched into eight pom-poms on the ends of short, muscular arms, which the animal uses to grasp and hold hapless prey. When it wants to pick up and move, it can walk end over end, tumbling from its sucker-tipped stem to its pom-pom arms, or it can detach and allow itself to float in the water, riding the current to new feeding grounds.

Ribbon or Nemertean worms are some of the freakiest animals most people have never heard of, despite being found not only throughout the ocean, but even in your own backyard—albeit usually much tinier.

Nearly all of these slimy, gooey creatures are carnivorous. They scavenge on dead animals or hunt live prey, which they overpower with a venomous sting, acidic spit, or toxic slime secretion. Many possess a projectile proboscis that can even branch like a spidery web, while others can simply stretch open their mouths like a python to engulf meals far larger than themselves. Some species are among the longest of all known animals, reaching nearly 60 meters (200 ft) when outstretched but fortunately still little wider than a human finger.

These animals look familiar to anyone who’s seen James Cameron’s Avatar, which lifted them almost unaltered for its alien forest fauna.

These filter-feeding worms live their entire adult lives sealed in the same tubular tunnel, excavated from rock or coral. The Christmas trees we can see are the animals’ elaborate, coiling palps, very complex lips used for trapping plankton. These feeding appendages also double as the animal’s gills. Weirder still, they possess specialized light-sensitive cells allowing the worms to see. These animals are so adapted to expose only their mouths that their mouths subsequently evolved into their new eyes.

Jonathan Wojcik also writes on his own site, BogLeech.com.