The word “dinosaur” comes from two greek words. The first is deinos, which means “terrible,” “powerful” or “wondrous.” The second is sauros, which means “lizard.” We are always learning new things about dinosaurs from their fossils. There have been many “facts” over the years that were once the general consensus but have since been proven false or have brought much debate. This is a list of 10 “facts” that have changed over time. 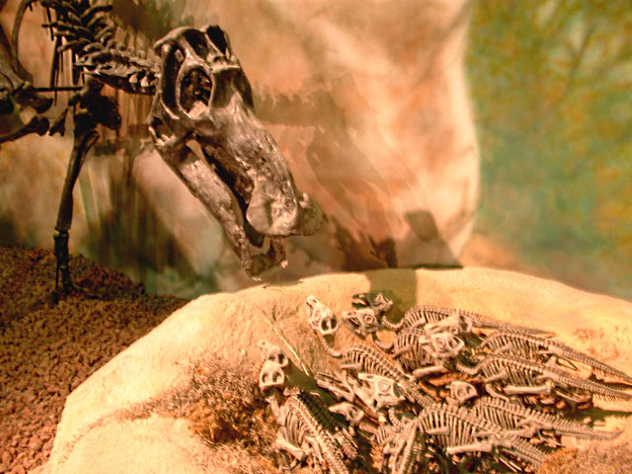 In the past, the general census was that dinosaurs abandoned their eggs after birth like reptiles, but newer findings have shown that many dinosaurs cared for their young, like modern-day birds. Fossilized dinosaur burrows and nests reveal a lot about their behavior. Nests vary from simple pits to complicated constructions with mud rims. They appear in large groups or alone. The nests and the clutches of eggs reveal information about the dinosaur’s nurturing behavior.

Many Maiasaura nests have been found in Montana. Nests, eggs, hatchlings, juveniles, and adults have been found in the same area. The evidence indicates a high level of parental care and a very social dinosaur. The nests were holes scooped out of the ground, 1.8–2.1 meters (6–7 ft) wide and about 1.1 meter (3.5 ft) deep. Newborns were only about 0.3 meters (1 ft) long. Nests were placed about 9 meters (30 ft) apart, the size of an adult Maiasaur. In one area of Montana, a group of of over 40 nests covers 2.5 acres of land.

9 ‘Dinosaurs Were Covered In Scales’ 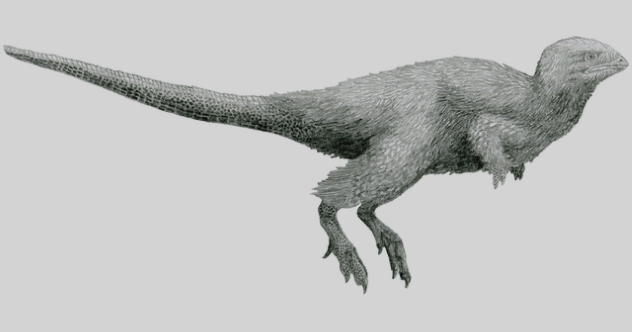 Previously, the general census was that all dinosaurs were covered in scales, but newer finds have confirmed over 30 species of non-avian dinosaurs to have had feathers, from either direct fossil evidence or things like quill knobs. Until now, all feathered dinosaurs were confirmed to be carnivorous ancestors of birds. However, in 2013, fossils of a new herbivorous dinosaur were unearthed along the banks of the Olov River in Siberia. The new species, Kulindadromeus zabaikalicus, had evidence of feathers. This may mean that all dinosaurs had feathers.

K. zabaikalicus lived about 160 million years ago and was about 3 meters (10 ft) long. Based off many incomplete skeletons, the bipedal animal had short forelimbs and longer hind legs with five digits. It is likely that there was a river even when this animal was alive. When the animal died, it was protected from scavengers in the river, and imprints from the feathers and scales were preserved. 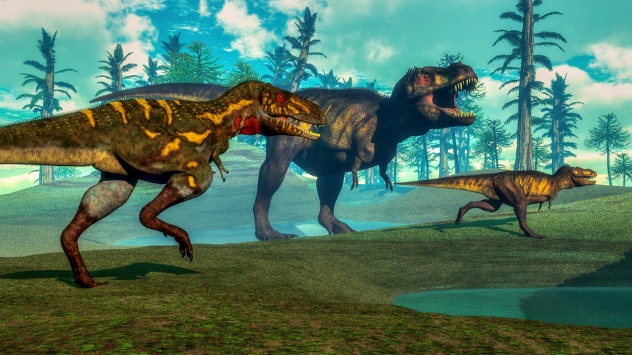 Many people think that dinosaurs were cold-blooded like reptiles today, but if they were, they wouldn’t have had the muscles necessary to prey on other dinosaurs. Scientists evaluated the metabolism of many dinosaurs, determining body mass from the bulk of their thigh bones and growth rates from rings in the fossilized bones. The results indicated that dinosaurs had growth and metabolic rates that were neither cold-blooded nor warm-blooded.

Dinosaurs didn’t act like mammals, birds, reptiles, or fish. Their physiology was different from modern animals. Dinosaurs were thought to be slow, lumbering, cold-blooded animals, but the more fossils that are uncovered, the more fast-looking dinosaurs like the Velociraptor are found. This leads many to believe that they were as active as warm-blooded mammals and birds.

However, simply saying that all animals are cold-blooded or warm-blooded is too simplistic. Some animals alive today, like the great white shark, leatherback sea turtle, and tuna, do not easily fit. By examining animal growth and use of energy to reconstruct a metabolic continuum, dinosaurs fall right in the middle. 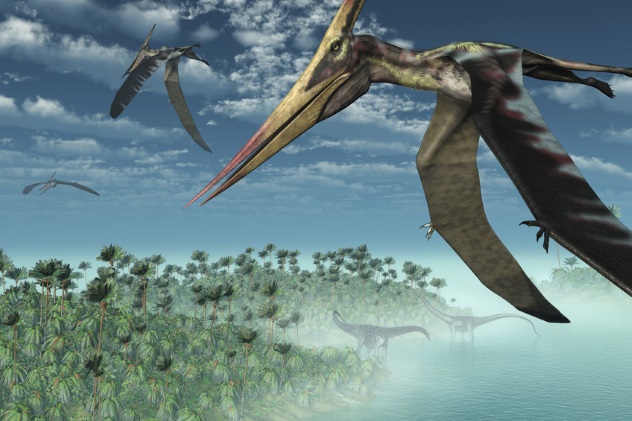 Dinosaurs belong to a very diverse group of terrestrial reptiles that had unique anatomical features. Pterosaurs were flying reptiles and are excluded because of that. The main feature that made dinosaurs stand out from other reptiles is their limbs. Unlike prehistoric crocodiles, dinosaur limbs were directly beneath their bodies, allowing them to stand erect. 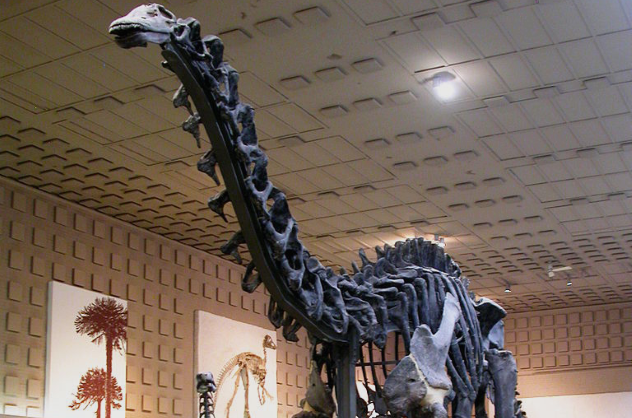 The Brontosaur was first documented in the 1870s, but by 1903, paleontologists ruled that the fossils were actually part of an Apatosaur. In the 1970s, a Brontosaurus fossil was found in the Western United States. It was named Brontosaurus excelsus, the “noble thunder lizard.” However, scientists later decided that B. excelsus was so much like an Apatosaur that it was renamed Apatosaurus excelsus.

More recently, a new analysis of the fossils by Oxford University has restored Brontosaurus as a genus. This was made possible through sophisticated computer software, which was used to calculate differences between other species and genera of diplodocid dinosaurs. In truth, the differences between Brontosaurus and Apatosaurus are as numerous as you would expect to find between two different genera.

5 ‘Dinosaurs Are All Extinct’ 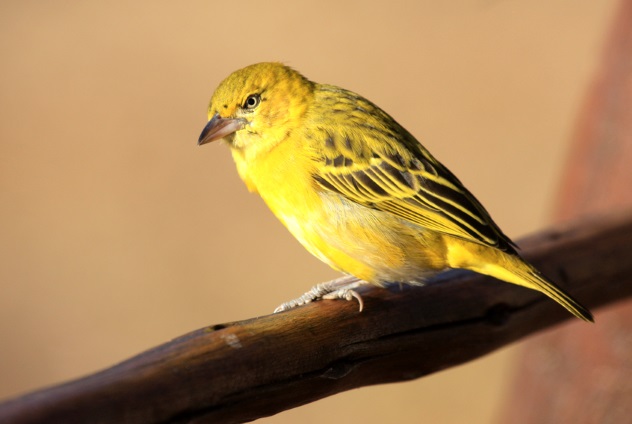 Are dinosaurs extinct? Not really. It’s true that sauropods and an many other groups are dead and buried. However, one of the eight major dinosaur groups, the theropods, survived the Cretaceous-Paleogene extinction event. One of the 40 subgroups of theropods evolved into many of the birds we know today.

It’s popularly believed that all dinosaurs went extinct about 65 million years ago, but there are thousands of living species of dinosaurs still around today. By modern evolutionary classification systems, there is no scientific reason to not consider birds to be a specialized variety of dinosaurs.

Biologists divide the dinosaurs into two major groups—the Saurischia (“lizard-hipped”) and the Ornithischia (“bird-hipped”). The lizard-hipped dinosaurs are divided into the Sauropodomorpha, which include the long-necked dinosaurs, and the Theropoda, which (despite being called “lizard-hipped”) includes modern-day birds and bipedal dinosaurs like Tyrannosaurus rex. 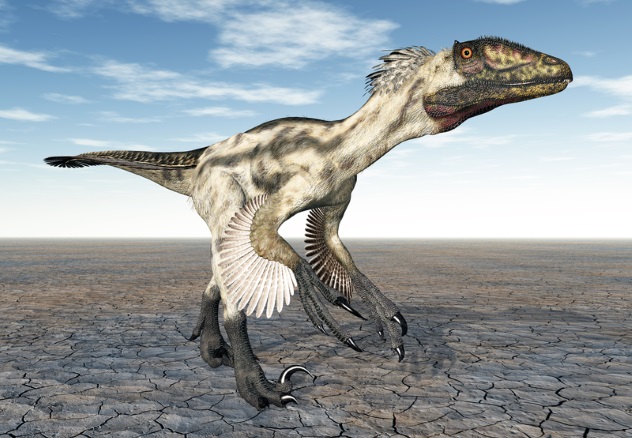 Thanks to Jurassic Park, we all know of Velociraptors, the smart, scaly dinosaur that towered over the terrified children. What if those dinosaurs weren’t actually Velociraptors? In paleontology, like other sciences, names are always in flux. Some dinosaurs are named different things by different scientists. Some are renamed so they aren’t confused with others. Most of the changes are only known to the specialists, but it’s a rare case when we know a dinosaur well but call it by a different name than paleontologists. The Velociraptors in Jurassic Park were very wrong, and the experts picked up on it quickly.

Velociraptors were uncovered in Mongolia in the 1920s. They were a small predator that only grew to a height of 0.5 meters (1.6 ft) and a length of about 1.8 meters (6 ft). It is thought that they killed their prey with the sickle-shaped claws on their feet.

When Jurassic Park came out, there was one known type of raptor that fit the movie’s depiction of Velociraptor—Deinonychus. Deinonychus was documented in the 1960s. It was thought to be a scaled-up version of Velociraptor, but the genus differed in many ways. They were almost twice as long and tall as their Mongolian cousins. They had a large sickle claw on each foot, long arms with grasping hands, and a stiffened tail to help keep balance when chasing prey. Does that sound familiar? 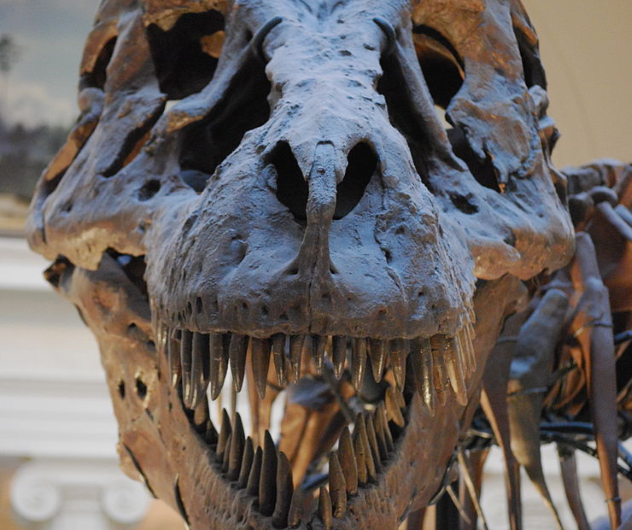 We all remember the “Don’t move! It can’t see us if we don’t move!” scene from Jurassic Park. Tyrannosaurus rex didn’t have as poor eyesight as we thought, though. Even without extensive investigation, the first sign that T. rex had good vision would be its front-facing eyes and narrow skull, meaning it would have had excellent depth perception. Plus, each eye was about the size of a softball.

It was found that T. rex’s binocular range was 55 degrees, which is greater than a hawk, so that supported the basic observations. Also, other theropods had binocular ranges comparable to modern-day birds of prey. Further research shows that Tyrannosaurus rex had 13 times better visual clarity than a human. Some tests even showed it could see certain objects clearly up to 6 kilometers (3.7 mi) away. 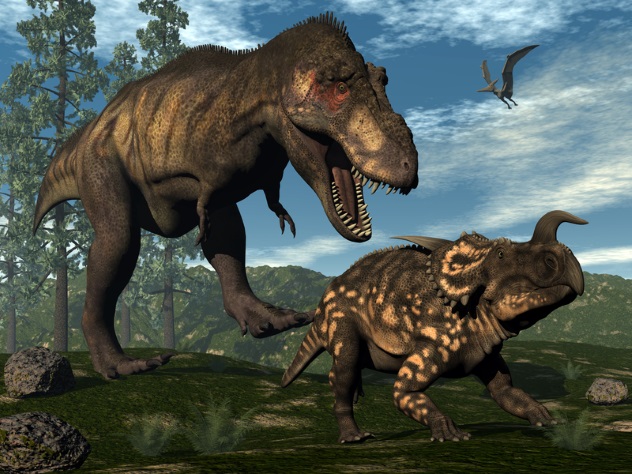 Many of us assume that Tyrannosaurus rex arms were relatively small and useless, but that might not have been the case. Each arm was heavily muscled and could probably lift 199 kilograms (439 lb). The key evidence for this comes from stress fractures that were found in the furcula (wishbone-shaped bones) of many Tyrannosaurus rex fossils. The bones are part of the forearms. The fractures probably resulted from extreme struggles with prey or other Tyrannosaurs.

Tyrannosaurus rex might have latched onto its prey’s throat with its mouth to suffocate it while holding it still with its arms. Conversely, T.rex has also been thought to have used its forearms to push off the ground to stand or to hold another while mating. Neither of these could produce the fractures found in the fossils, however, so its likely that they did indeed use their arms for hunting. 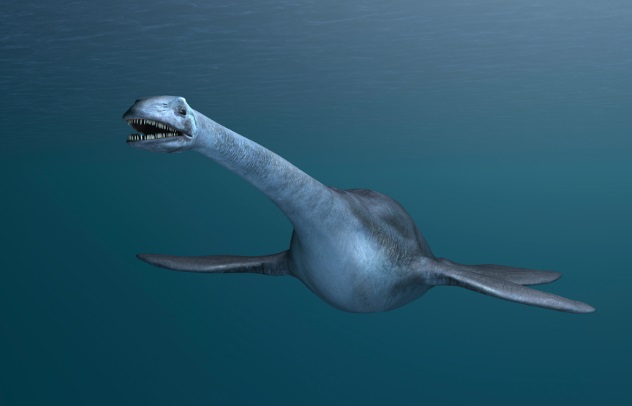 We’ve all heard of the Loch Ness Monster, which is said to be a Plesiosaur, but what a lot of us don’t realize is Plesiosaurs were not dinosaurs. Dinosaurs belong to a very diverse group of terrestrial reptiles that had unique anatomical features. Like pterosaurs, aquatic reptiles don’t fit the bill.

Plesiosaurus had a broad body with a short tail and ranged from 2.4 to 14 meters (8–46 ft) long. They had long necks, small heads, and large flippers instead of legs. (Other genera of plesiosauroids had larger heads and shorter necks.) The flippers were used to rotate quickly, but they were probably slow swimmers. Their long necks allowed them to snatch prey as they swam just under the surface. Many depictions show Plesiosaurs sticking their heads out of the water, but it would have been impossible for them to do this. They couldn’t move their necks like that, and even if they could, gravity would have probably tipped them over.

Hello. I am a poet and aspiring author.
My books can be found at amazon.com/author/ronald_eayre
My website is found at http://www.ronaldeayre.com/
I am most active on Twitter at https://twitter.com/ronaldeayre