There is no subject so insignificant that you can’t find a person who disputes the facts about it and has crafted some conspiracy theory. When it comes to the big topics of war, politics, and religion, it is no surprise that the fringe theories are correspondingly vaster. Conspiracy theories are often genuine attempts to understand the world and should not be immediately dismissed as the work of swivel-eyed loons. Examine the evidence for yourself. Here are ten of the stranger theories that have been woven around the life of Jesus.

10 Jesus The Tin Trader In Britain 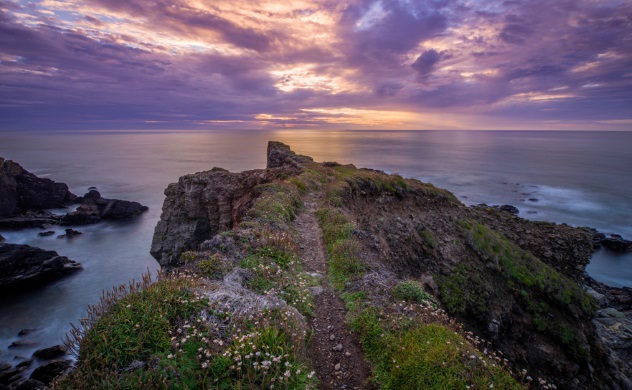 And did those feet in ancient time,
Walk upon England’s mountains green?
–William Blake, “Jerusalem”

The most fruitful parts of Jesus’s life, as far as fringe theorists are concerned, are the so-called “missing years.” The Bible falls curiously silent about the 18 or so years between Jesus’s childhood and the beginning of his ministry. Several theories link Jesus to Joseph of Arimathea’s visits to Britain to trade tin.

When we picture the ancient world, we think of such long journeys as nearly impossible. But for centuries, tin from Cornwall had been reaching the Mediterranean, and the Romans ruled Europe all the way to the English Channel. Others claim that Jesus may have gone to study under the Druids.

Is it possible that Jesus did find his way to Britain? More likely is that the story was created to tie in with the Arthurian legend. King Arthur’s knights set out to find the Holy Grail, but why would such an item be in Britain? If Joseph of Arimathea had links to Britain, then it would make sense if he brought it.

9 Jesus Was A Mushroom In 1970, archaeologist John Allegro published a book called The Sacred Mushroom and the Cross. In it, he claimed to have traced elements of the New Testament to more ancient sources in Sumer and Babylon. After decades of close study, he came to realize that the New Testament was a way of perpetuating older fertility rites. In his version of events, Jesus becomes a metaphor and a mushroom.

The mushroom Amanita muscaria can be hallucinogenic. Allegro linked ritual use of Amanita in religious rites, which he felt could be seen in Christian art, to the consumption of the body of Christ in the Eucharist. Strangely, this view hasn’t caught on with many church groups.

8 Jesus Was An Alien There have always been rationalistic attempts to explain the miraculous events recorded in the Bible. Not all of these attempts have been totally rational themselves. One such theory is that Jesus, instead of being perfectly human and perfectly divine, was actually an alien-human hybrid.

Those advocating the extraterrestrial origins of Jesus suggest that the angels who visited Mary were actually aliens, and the star over Bethlehem was actually a UFO. This theory even appears in a British Christmas song. Jesus’s miraculous powers could then simply be the magical interpretation of advanced technology. Was Jesus’s ascension into Heaven simply him returning to the mother ship?

7 Jesus Was A Woman 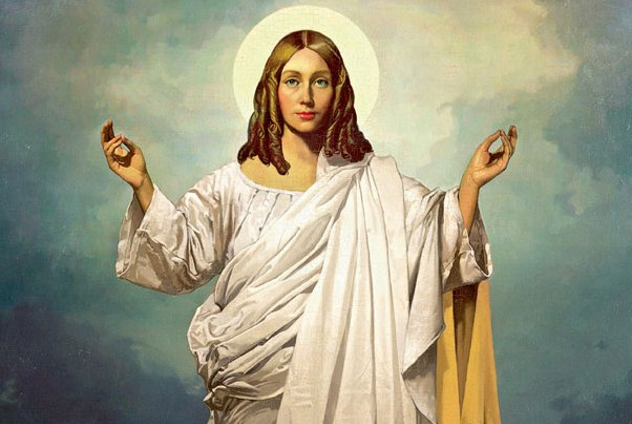 In the Ancient Near East, it would be highly unusual for a man to go through life unmarried. This is often used by conspiracy theorists to suggest that knowledge of Jesus’s wife has been suppressed. There is even a papyrus fragment which seems to show Jesus referring to his wife.

One other way of interpreting Jesus’s celibacy though is to say that he didn’t marry a woman on the grounds that Jesus was a woman. While early church figures often did attribute female characteristics to God, this seems to have been metaphorical. Today’s believers in a female Christ cite that fact that Jesus has also been depicted as a woman in art throughout history. 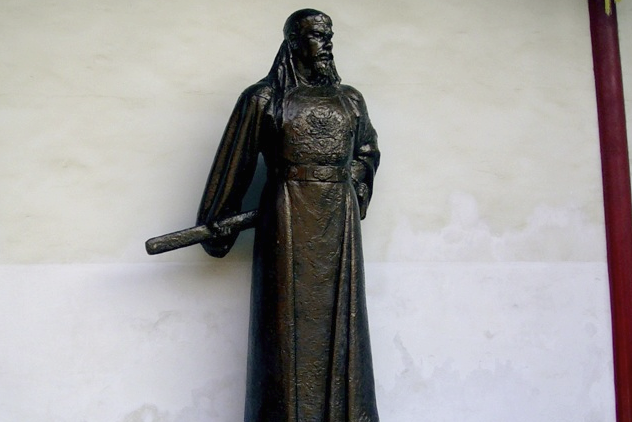 The Catholic Church holds the perpetual virginity of Mary as a doctrine of faith. Although the Bible refers to Jesus’s brothers and sisters, they’ve been explained as either half-siblings or more distant relations. In China, however, things became more mystical.

In the 19th century, Hong Xiuquan had a vision. Taken up into Heaven, he saw a bearded figure who told him to destroy demons. Later, having been taught about Christianity, he came to realize he was the younger brother of Jesus, and the demons were the ruling elite. While this may sound absurd to us, Hong led a peasant revolt, known as the Taiping Rebellion, which led to the deaths of up to 30 million people.

5 Jesus Was A Time Traveler 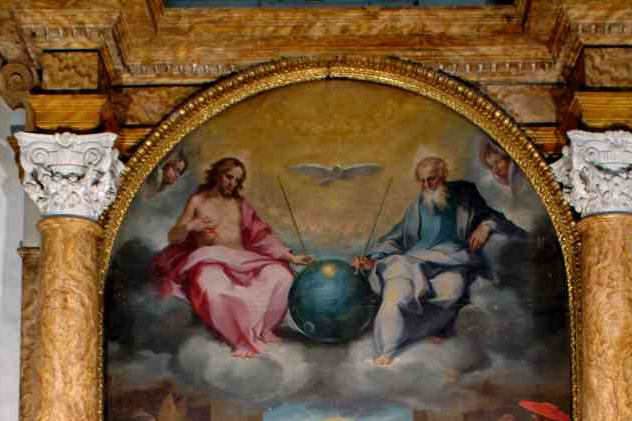 People across the ages have claimed that Jesus has appeared to them. This might be an expression of their faith, or it could be his ability to travel through time? Even Jesus’s appearance after his death could be explained by time travel. If Jesus came from the future, then his healing miracles were the mundane application of modern medicine.

Another claim of Jesus time traveling comes from a 1595 painting, The Glorification of the Eucharist, which some people claim shows him with a satellite that looks a little like Sputnik.

4 Jesus Was A Buddhist Jesus lived in a multicultural world. The Romans were well-entrenched, Greek was spoken as a language of learning and business, and trade came from all corners of the world. Isn’t it possible that his teachings were influenced by Eastern beliefs?

It has been claimed that Jesus spent some of his missing years in Kashmir and that his tomb is located there. Even if Buddhism didn’t reach the ancient Near East, Jesus’s jaunt to Kashmir could have given him exposure. There are certainly similarities between the ascetic faiths. Some even find corresponding aspects between Jesus and Buddha: They were both teachers who had unusual births, used parables to spread their messages, began their ministries at age 30, reached out to outcasts, and resisted temptation by the Devil. 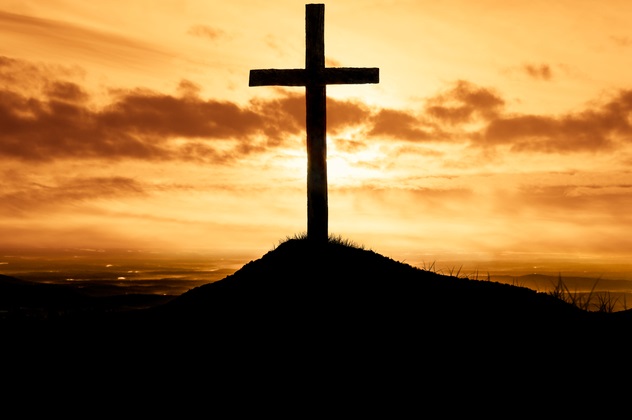 Attempts to rationalize the more fabulous parts of the New Testament reach their ultimate level in the belief that there never was a historical figure called Jesus. There are no historical documents from the lifetime of Jesus that mention him. The canonical gospels were written between 40 and 60 years after his death, possibly by people who never met him. The earliest New Testament texts are the letters of St Paul, who never met Jesus except in an “appearance.”

The fact that Jesus performed his miracles in a Roman province during one of the best-documented periods of antiquity, but no mention is made of him or his wonders has led people to deny his existence. If the tombs of Jerusalem opened and the dead returned, it seems odd that such an event would have been omitted from Pliny the Elder’s encyclopedic writings. On the other hand, a teacher with followers outside the scholarly classes might easily go unnoticed. 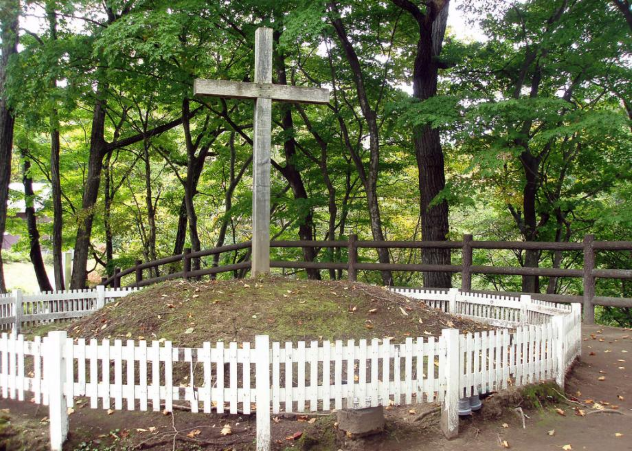 Jesus did not die on the cross . . . at least according to one Japanese tradition. His burial mound can be found in Shingo. It seems that Jesus’s lesser-known brother, Isukiri, took his place on the cross so that Jesus could escape. Jesus then moved to Japan, became a rice farmer, married, and settled down into a sedate life until he died at the age of 106.

You might wonder why Jesus would have chosen Japan for his retirement. It turns out that the missing years once again explain this theory: During the undocumented years of his life, Jesus was actually studying under a master at the foot of Mount Fuji. When things became troubled in the West, he fled back to his spiritual home.

1 Drugs In The Sponge The differences between various Gospels’ accounts of Jesus’s life are often used by skeptics to cast doubt on all aspects of it. One curious detail is mentioned in Gospels of Matthew, Mark, and John: On the cross Jesus was given a drink of vinegar from a sponge and then died.

[36] And one running and filling a sponge with vinegar, and putting it upon a reed, gave him to drink, saying: Stay, let us see if Elias come to take him down. [37] And Jesus having cried out with a loud voice, gave up the ghost.
–Mark, Chapter 15

The multiple mentions of the sponge have led some to build theories around it. What if the sponge was not soaked in vinegar but with some potion meant to incapacitate Jesus? The theory goes then that Jesus never died on the cross. His body was taken down still alive, and there was nothing extraordinary about his return three days later.

Ben Gazur is a keen Fortean and can be followed on Twitter.