From the earliest days, there were stories that sneaked into the Bible as the Word of God. Along the line, though, people cut away at them, trying to work out what was written by the divine inspiration of God and what was written by a crazy person with a penchant for Jesus fan fiction.

Some of these stories are completely insane, and if they had made it into the Bible, Christianity would be a very different religion today. 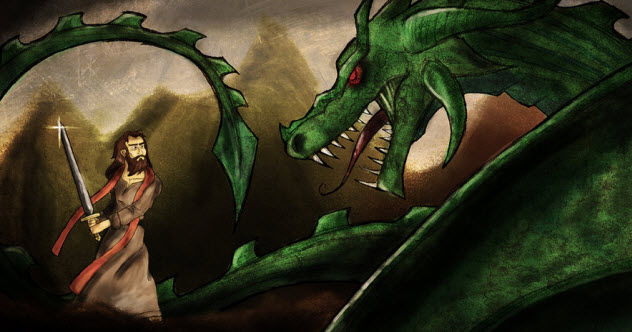 After the birth of Jesus, Herod sent men out to have the baby killed. But our Bible doesn’t go into much detail on how Jesus got away. We’re just told that Mary and Joseph hid out in Egypt for a while.

That would have changed, though, if the Gospel of Pseudo-Matthew had made it in. According to this book, Mary and Joseph tried to hide in a cave, only to find that it was full of massive, fire-breathing dragons.

That didn’t bother the one-month-old Baby Jesus, though. Jesus hopped down from his mother’s arms, walked over to the dragons, and stared them down until they “retired.” Then Infant Jesus turned to his terrified mother and said, “Do not consider me to be a little child.” Because, as it turns out, even Jesus wanted his mom to stop babying him.

9 Jesus Goes On A Killing Spree 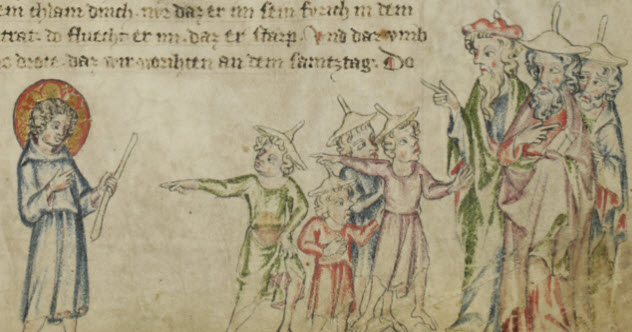 In the Infancy Gospel of Thomas, one-year-old Jesus goes on a killing spree. The book starts with Baby Jesus playing in a pool of water and turning clay into living birds. When another kid messes up his game by splashing the water with a stick, Jesus curses the boy to be “withered like a tree” and leaves him to die.

Soon after, somebody bumps into Jesus. Since Jesus doesn’t take any nonsense, he declares, “Thou shalt not finish thy course!”—and the kid falls down dead.

The town doesn’t really care for Jesus’s murder-happy habits, and they ask Joseph to discipline his child. He tries, but Jesus doesn’t apologize, promise to change his ways, or bring anybody back to life. Instead, he curses half the town with blindness.

8 The Serpent Was Just Trying To Help 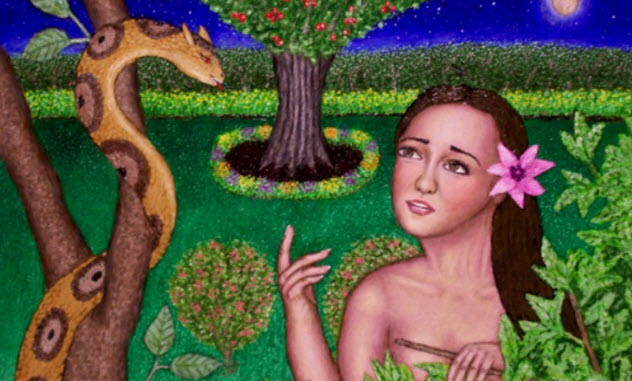 The Testimony of Truth retells the story of the Garden of Eden except that the serpent is not the Devil this time. He’s just a particularly clever animal, and God just calls him “Devil” because He’s angry.

The big change, though, comes at the end of the story. It begins with ‘But what sort is this God?” and then starts calling God out on all the weird parts of the stories, from pretending not to know where Adam was to majorly overreacting over eating a fig. The book even says that God “has shown Himself to be a malicious grudger!”

Even though it sounds like an antireligious book, it’s actually a Christian text with a uniquely complex view of God. Still, it’s easy to understand why this one isn’t in your Bible.

7 The Apostle John Talks To Bedbugs 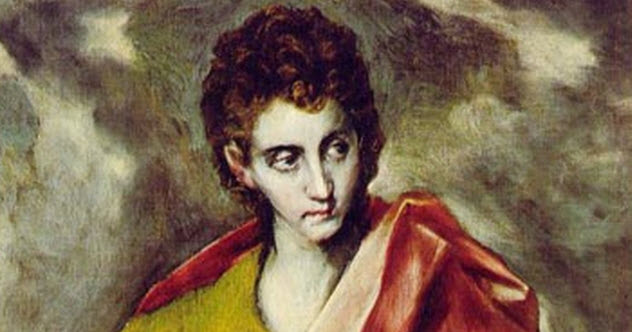 Another book called the Acts of John follows Jesus’s disciple on his own journeys. In this book, John is capable of performing miracles, but they’re less impressive than Jesus’s.

For example, John lies down in a bed at an inn but can’t sleep because of all the bedbugs. Instead of filing a complaint with the manager, John tells the bugs, “Behave yourselves!” and makes them all leave the inn.

In the morning, the bedbugs are patiently waiting outside the door for John to let them back in. “Since ye behaved yourselves,” John tells them like a weary father trying to set his child right, “come unto your place.”

6 Saint Peter Uses A Talking Dog As A Messenger 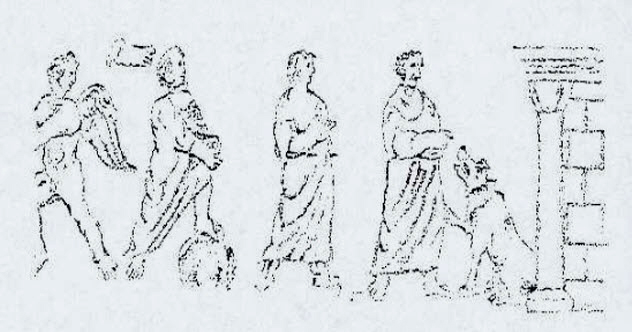 The Acts of Peter tells the story of the disciple Peter—best known as the first Pope of the Catholic Church—who, apparently, spent most of his time fighting wizard battles.

In particular, Peter pits himself against a man named Simon Magus, a sorcerer who upsets God. Peter comes to town to confront Simon in the weirdest confrontation ever.

To prove he’s God’s servant, Peter gives a dog the power of speech and sends it to call out Simon. The dog does, but Simon is not impressed. He tells the dog, “Tell Peter that I am not within.”

The greatest part of the story is that the dog calls him out on it. “Here is a dumb animal sent unto thee which hath received a human voice,” the dog tells him, before finally just asking him, “Art thou not ashamed?”

5 Peter Casts The First Stone At A Flying Wizard 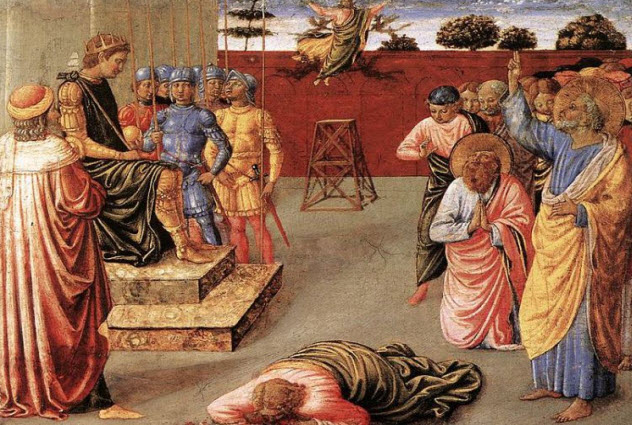 Photo credit: Is That in the Bible?

The battle between Peter and Simon gets crazier after the incident with the dog. Simon, wanting to prove that he is the true messenger of God, flies up into the sky and challenges Peter to do the same. It’s weird that Simon’s miracle works but even weirder that Peter can’t meet Simon’s challenge and fly up with him.

Instead, Peter prays to God and asks Him to make Simon fall down and “break his legs in three places.” God does, and Simon comes crashing to the ground. But it’s the cold, clinically written ending that makes it truly strange:

“Then every man cast stones at him and went away home and thenceforth believed Peter.”

4 Jesus Pulls Judas Aside And Tells Judas To Betray Him 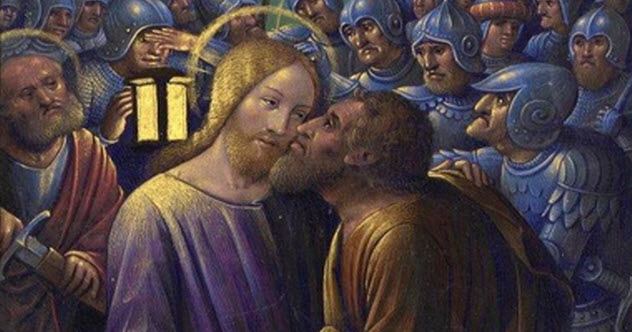 We know that the Biblical character Judas betrayed Jesus, but we don’t get much insight into why—except in The Gospel of Judas. In this Gnostic gospel, Judas isn’t some evil betrayer—he’s Jesus’s closest confidant.

Jesus tries to tell the disciples about a great generation that is yet to come, but they can’t understand the idea. So Jesus pulls Judas aside and tells him because Judas is the only one who gets it.

Jesus also tells Judas to betray Him and that it’s okay. He tells Judas that, compared to every other Christian, “You will exceed all of them.” Jesus also says that “[Judas’s] star has shone brightly” and that he has a place waiting for him in Heaven in exchange for his willingness to sell out Jesus and complete His destiny. 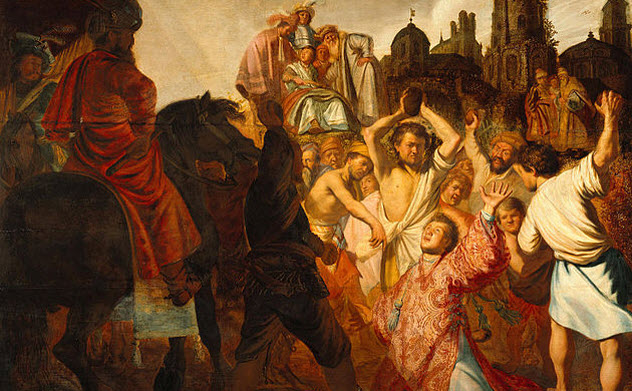 The Apocalypse of Stephen tells the story of the first Christian martyr, who was crucified for telling people that Jesus would return on Judgment Day. It’s a relatively normal story of early Christian persecution except an angel keeps showing up just to drag out poor Stephen’s death.

Stephen is sentenced to die by Saul, who has Stephen nailed to a cross. An angel swoops down from Heaven, heals Stephen, and throws away the cross, saving Stephen’s life. But it never occurs to the angel to get him out of there.

Saul then has seven men pour molten lead into Stephen’s mouth and nail him up again. But the angel pulls him down once more. Finally, they just hurl rocks at Stephen until he dies.

But it takes Stephen a full 10 hours to finally end his suffering. So all the angel’s work was pointless, and Stephen probably spent his last moments wishing they’d have just let him be crucified. 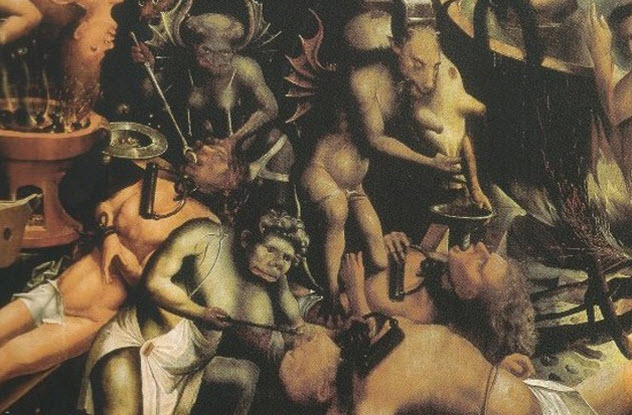 In the Apocalypse of Peter, Peter is taken on a guided tour through the brutal torments of Hell. Murderers spend their time getting attacked by snakes and calling out, “O God, thy judgment is just!”—which isn’t unreasonable since they seem to be getting off pretty easily compared to everyone else.

Women who have had abortions get it much worse. They spend their time drowning in a lake of the murderers’ blood while their unborn babies sit above them crying. And just for good measure, their eyes are repeatedly set on fire.

Rich people who don’t donate to charity have to roll on red-hot rocks sharper than swords. High-interest lenders sit in a pitch full of blood. And homosexuals are repeatedly taken to the top of a cliff and thrown down for all of eternity.

1 Jesus Denies Being The Son Of God 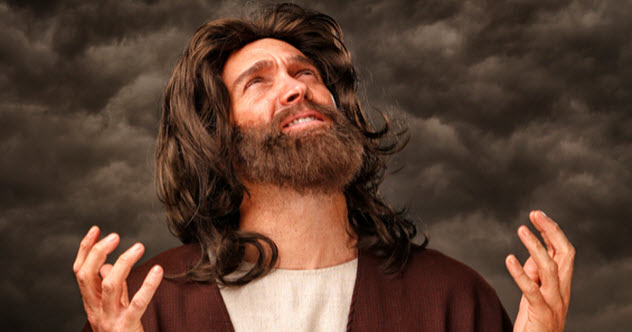 In the Gospel of Barnabas, Jesus is just a prophet who can’t stand being called the Son of God. He even yells at his disciples, “Cursed be everyone who shall insert into my sayings that I am the Son of God!”—and every one of the disciples falls down as if dead.

When he asks Peter who he is, Peter responds, “Thou art Christ, Son of God.” This makes Jesus so furious that he calls Peter “the Devil” and threaten the disciples by saying, “I have won from God a great curse against those who believe this!”

The Gospel of Barnabas never made it into the Bible and has been rejected outright by Christians. But in some Muslim communities where Jesus is viewed as just a man, it’s been called a sacred text.