Over the course of human history, people have abused and murdered each other in horrific ways. While we tend to be violent and dangerous to one another, modern societies also tend to lean away from these horrific abuses, but that doesn’t mean they don’t occur. When it comes to human rights abuses, we seem to up the game whenever possible, but the worst atrocities are often given a Biblical justification.

While the Christian Bible is used by hundreds of millions of people across the planet for peace and love, it has been used to justify some of the most horrific injustices committed against some of the weakest people in society. Even though the people using the Bible in this manner represent a minority of believers, those who succeeded in such a practice are responsible for some of the worst atrocities ever committed. Presented in no particular order, as these atrocities are all horrible, here are ten human rights abuses carried out by people who justified their actions with the Christian Bible. 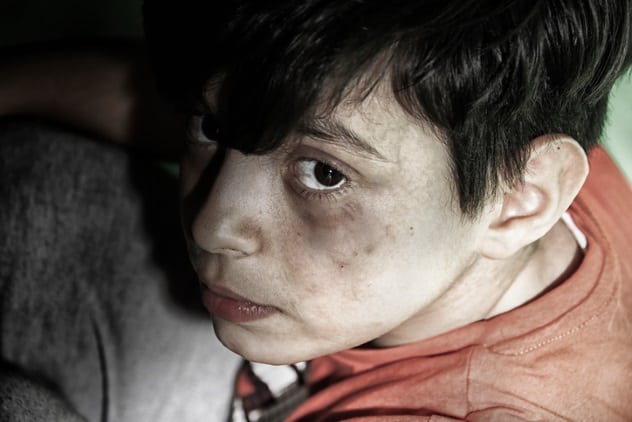 Most people agree that abusing a child through neglect, emotional abuse, or physical harm is a terrible thing to do, but according to some passages in the Bible, it’s necessary to properly raise a kid. Various passages have been interpreted to support child rearing over the years, but one in particular, Proverbs 13:24, has been used by various people to implement the harshest types of abuse against children.

The people guilty of human rights abuses who follow this passage are Biblical literalists who beat, malnourish, and torture children to break their will. Hana Williams was adopted by two Evangelical Biblical literalists who starved, beat, and ultimately killed her after they locked her outside, where she succumbed to hypothermia, in 2011.[1] Those parents were sentenced to 30 years for manslaughter, but their case is hardly the only one of its kind. Child abuse is a serious concern in foster and adoption situations, where Evangelical Christians are more likely to be granted children over irreligious people in the United States. 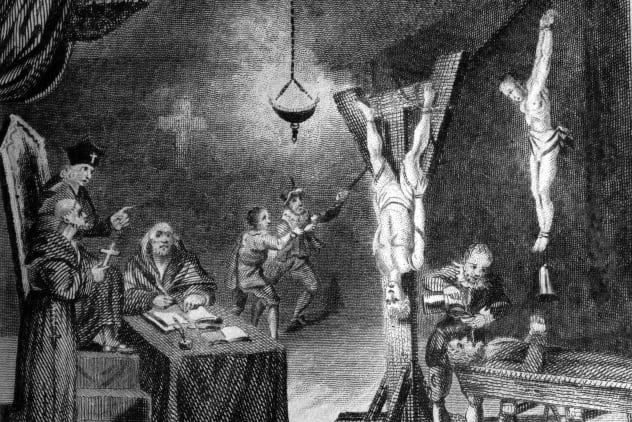 Torture is nothing new, and it has been used by pretty much every civilization on the planet for one reason or another. During the Spanish Inquisition, torture was regularly used by the Catholic Church to identify heretics and also to forcibly convert Jews and Muslims to Catholicism or leave the country. What resulted was the imprisonment of hundreds of thousands of people who were tortured and confined, leading to an estimated 32,000 executions.[2]

Modern uses of torture are rarely justified using the Bible or Christian practices used centuries ago. The most recent example would be the United States’ waterboarding of prisoners during the Bush administration following the terrorist attacks on September 11, 2001. While not directly linked, President Bush mentioned in a speech that the United States was engaged in a “crusade” against Islam. Because the US is considered by many to be a Christian nation, his statements reignited images of the historical Crusades, which led many to question his motives as possibly being motivated by his faith. 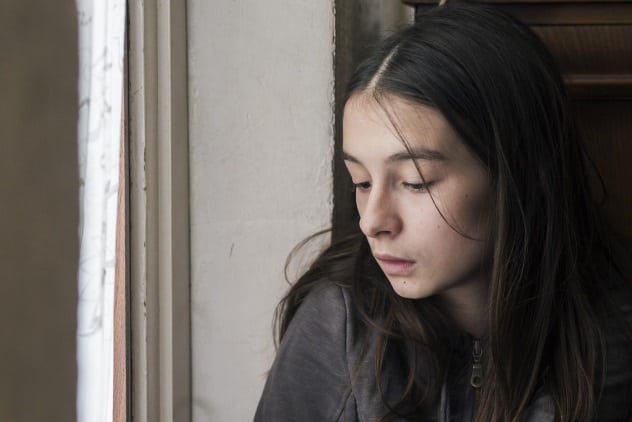 Most Western societies have abolished child marriage, but it sadly continues in various countries around the world. The practice is justified in Numbers 31:18, which reads:

Child marriage was common throughout history for a number of reasons, but primarily, women would be wed as soon as they could bear children. As society evolved around modern medicine, it was no longer necessary to marry children so young. Unfortunately, it seems many people didn’t get the memo, and the age of consent in many states and countries is still relatively low. In Andorra, Albania, and Austria, the age of consent is only 14, while some states in Mexico set the limit at 12.

Marriage laws in the United States vary, but young girls are often pressured into marriage should they become pregnant in certain Christian communities. This can occur legally with children as young as 12 years of age.[3] 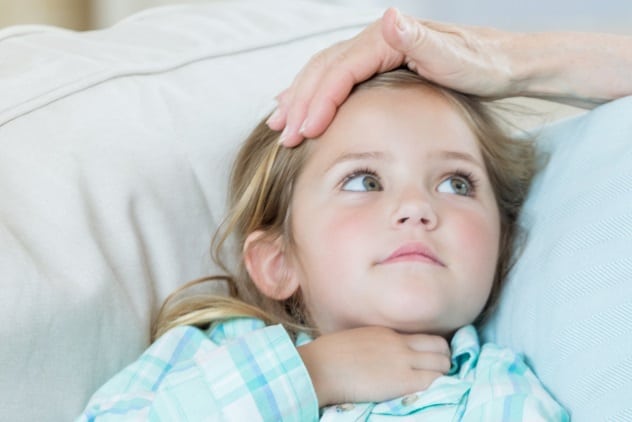 Faith healing isn’t inherently an evil practice, and there are millions of people who rely on it. It becomes a serious concern for law enforcement and the general welfare of human rights when it is used to treat children who have no choice in the matter. For example, when parents decide to treat an infection through prayer, they forego the necessary antibiotics which would normally eradicate the disease. This can result in an incredibly painful—and, more importantly, preventable—death.

The practice of faith healing is justified in both the Old and New Testament. In various passages, Jesus credits healing someone through their faith in God, which many have interpreted as a path to wellness. Most deaths attributed to faith healing were preventable via modern medicine, and many parents have lost their remaining children and been imprisoned as a result of the death of a child. In 2017, a couple lost their two-year-old daughter to “God’s will” after they refused to take her in for treatment of pneumonia.[4] Both parents were charged with involuntary manslaughter and child endangerment. 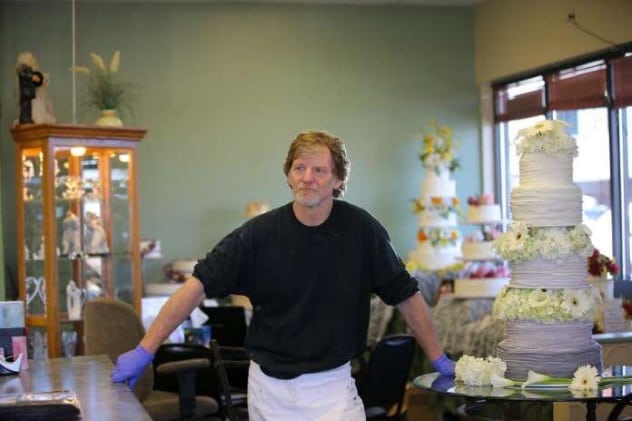 If you live in the United States and other Western countries, you may have noticed a growth in LGBTQ+ acceptance over the past 30 or so years. While acceptance has grown, the pressure from the other side has equally intensified. Ironically, most people who oppose legislation supporting gay marriage and other aspects of equal rights insist they don’t have a problem with gay people themselves. This cognitive dissonance results from an adherence to a specific Biblical passage found in Leviticus 20:13.

If a man also lie with mankind, as he lieth with a woman, both of them have committed an abomination; they shall surely be put to death; their blood shall be upon them.

This has led Evangelical Christians and other fringe groups to “love the sinner, hate the sin,” which has evolved into an outright anti-gay agenda. In the United States, a 2018 Supreme Court decision favored a Christian baker who refused to make a cake for a gay couple’s wedding.[5] The court favored his “religious freedom” rights over the anti-discriminatory rights of the couple. The baker and many others have cited Leviticus 20:13 as their reason to withhold services or support for LGBTQ+ people. 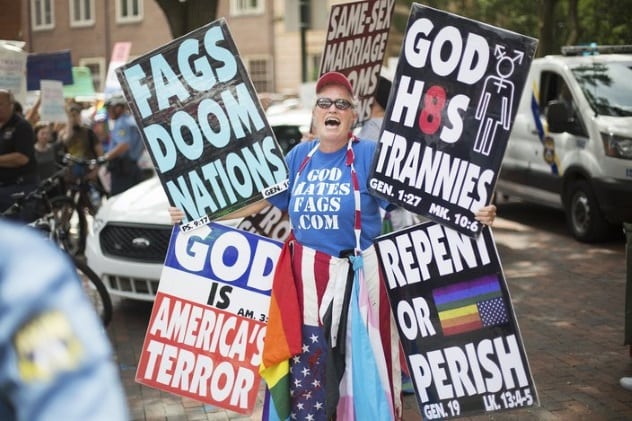 A fundamental, sacred aspect of a funeral service is that it is a somber occasion. In most cases, a procession makes its way to a cemetery after a service and quietly buries a loved one. When it comes to a military funeral in the United States, this is accompanied by a respectful ceremony involving the folding of a flag, presenting it to the deceased loved ones, and the playing of “Taps.” It’s respectful and dignified, which is why the protests put on by the Westboro Baptist Church fall into the category of a human rights abuse, requiring their placement on this list.

The church, which is unaffiliated with any formalized religious body, began protesting military funerals in 2005, bearing signs reading “GOD HATES FAGS” and “GOD LOVES A DEAD SOLDIER,” among other inflammatory statements.[6] The church opposes homosexuality, Muslims, Jews, Romani people, the US government, Catholics, Orthodox Christians, and pretty much anyone who isn’t a member of their group. They use numerous Bible passages to justify their actions, and they have caused a great deal of hurt and suffering to the bereaved. 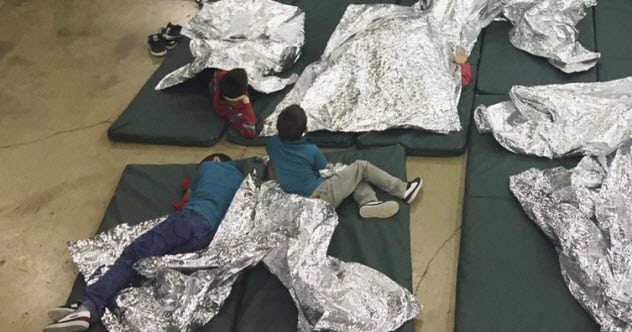 In May 2018, the United States government instituted a “zero tolerance” policy to prosecute all persons illegally entering the country. Attorney General Jeff Sessions spoke about the policy in a speech where he referred to a Biblical passage:

I would cite you to the Apostle Paul and his clear and wise command in Romans 13, to obey the laws of the government because God has ordained them for the purpose of order.

As it happens, Romans 13 has been used throughout history by lawmakers like Sessions to justify the rule of law. That passage has also historically been used to justify laws deemed questionable and inhumane. White slaveowners used it predominantly during the 19th century to justify the American slave trade, and Sessions again cited the passage to justify stripping children from their parents at the US-Mexico border.

Within three weeks of the new policy’s implementation, more than 2,000 children were forcibly removed from their parents and placed in internment camps.[7] The removal of children from their parents sparked an immediate outcry from the United Nations Human Rights Commission, which President Donald Trump quickly pulled the US out of, citing their treatment of Israel, though many suspect it was due to criticism of the new border policy. After immense backlash from both Democrats and Republicans, President Trump has since signed an executive order ending the separation of families at the border, though critics have pointed out that the order did nothing to reunite the kids already taken from their parents. 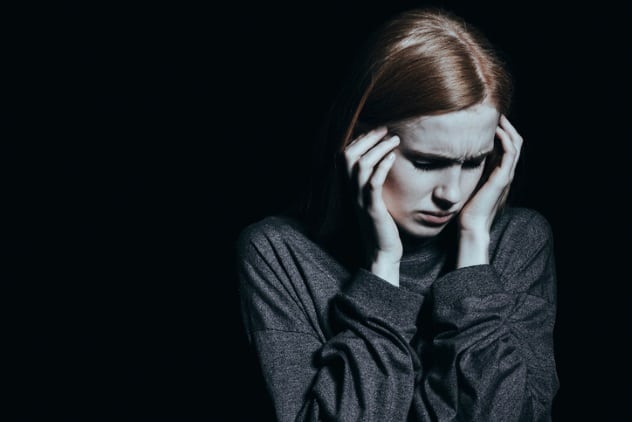 Conversion therapy is a process by which people are forcibly converted to heterosexuality. The practice has been implemented in the United States by right-wing Evangelical Christian groups and has been condemned as a human rights violation. It remains legal in some places, and most of the people put into conversion therapy are entered into it against their will.[8]

The idea behind the so-called therapy is that gender identity and homosexuality are a choice or state of mind that can be changed via prayer and other religious means. Research indicates that this is far from the truth, and while the therapy is intended to help the people placed in it, it causes harm and often results in suicidal ideations. 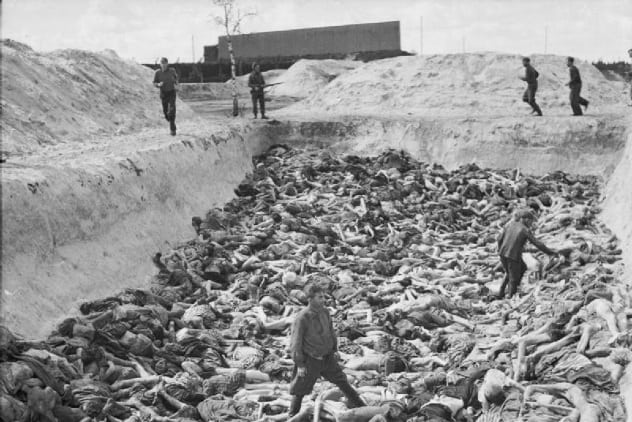 The Holocaust saw the internment and execution of an estimated six million European Jews between 1933 and 1945. The process that led up to the Holocaust and the justifications for the actions of the Nazis were deeply rooted in misrepresentations and misinterpretations of scripture by some of humanity’s worst people.[9] The Nazis were amazing propagandists who utilized people’s beliefs and prejudices to turn the German public against the Jews.

This was done through a variety of means, but ultimately, the justification was made that the Jewish people were “less than” the Christian majority in the country. Adolf Hitler justified many of his views in his book, Mein Kampf, through the Bible and cited numerous passages throughout indicating why the Aryan race was superior to all others:

Hence today I believe that I am acting in accordance with the will of the Almighty Creator: by defending myself against the Jew, I am fighting for the work of the Lord.

The Holocaust represents how religion and preconceived prejudices can be used to negatively motivate people to do horrific things. 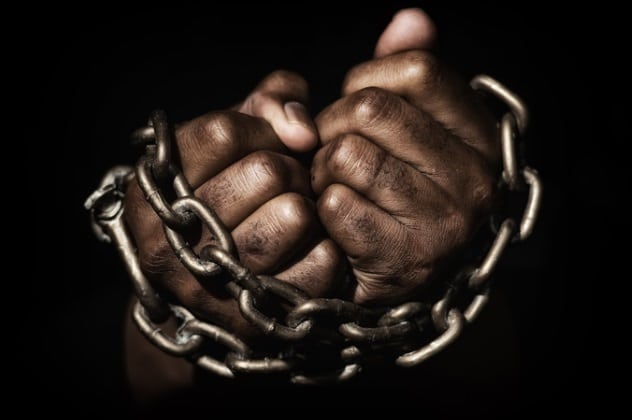 One of the worst atrocities in human history to find its roots in Biblical justification is the enslavement of Africans during the Atlantic slave trade. While this was not the first (or last) large-scale slave trade, it was heavily justified through Romans 13 and other passages in the Bible. Ephesians 6:5 even offers instructions to slaves on obedience:

Slaves, obey your earthly masters with respect and fear, and with sincerity of heart, just as you would obey Christ.

Between 1525 and 1865, more than 12.5 million Africans were enslaved and shipped to the Americas. Of those, 10.7 million are believed to have survived the trip.[10] Over the course of centuries, generation upon generation of African slaves worked in the Southern United States, often due to Biblical justification. It is impossible to say exactly how many millions of people were affected by the slave trade, but it is easily one of the most horrific human rights abuses mankind has ever accomplished and justified via the Christian Bible.

Read more about the Bible’s more controversial aspects on 10 Historical Records That Tell Another Side Of Bible Stories and 10 Controversies That Could Change How We View The Bible.