We’ve all seen the documentaries with archaeologists carefully using a small brush to dust away dirt from the remains of some long-dead creature. Finding the brittle remnants of an extinct animal is pretty typical in this field. But once in a while, researchers discover remains that are so well preserved that they earn a spotlight of their own. 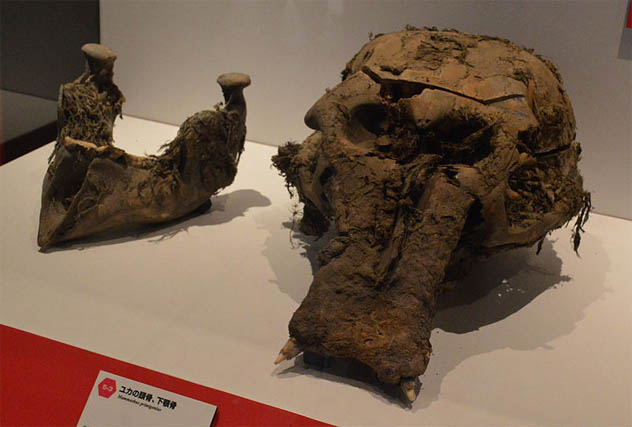 Though researchers have found multiple specimens of well-preserved woolly mammoths in the past, Yuka is by far the more strikingly well-preserved to date. The remains of this 1.8-meter (6 ft) baby woolly mammoth were accidentally discovered in August 2010 in Yakutia, a remote region of Siberia.

The animal was between six and nine years old when it died, and its carcass is estimated to be about 39,000 years old. Researchers say that Yuka was most likely killed by humans, since the remains show signs of having been cut open. That makes Yuka the first woolly mammoth that shows evidence of interactions with humans (albeit, interaction that didn’t end so well for the mammoth). The animal also has the most well-preserved woolly mammoth brain ever discovered, with the folds and blood vessels still intact

Yuka is so well preserved, in fact, that scientists are seriously discussing using her DNA to clone the species back into existence. We guess the researchers didn’t learn anything from Jurassic Park. 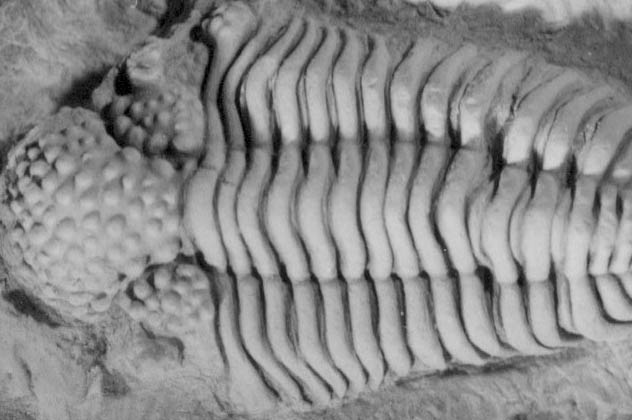 Don’t let the roly-poly appearance fool you—trilobites were actually very efficient predators in their time. This group of marine arthropods lived as early as 521 million years ago, during Earth’s early Cambrian period.

Trilobite fossils can be found on all continents, with some of the best preserved still having soft body parts like antennae and gills. They went extinct about 250 million years ago during the mass extinction of the Permian period. Lasting over 300 million years and consisting of over 20,000 different species, the trilobites are considered the most successful animal of all time. 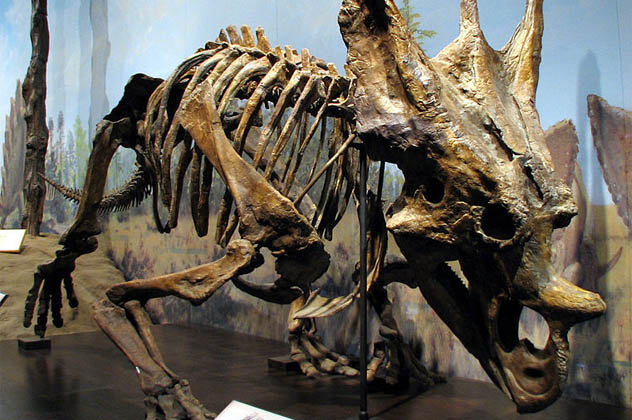 The well-preserved remains of a baby Chasmosaurus belli (the adorable cousin of the triceratops) were discovered in Alberta, Canada, in 2015. A paper on the discovery was published in 2016, which said that the body of the baby dinosaur was 75 million years old and largely whole.

Some of the creature’s skin even left an impression in the rock it was found with. The baby Chasmosaurus find was a boon to researchers since it’s so rare to find a baby specimen of this species that hasn’t been eaten or otherwise torn apart. 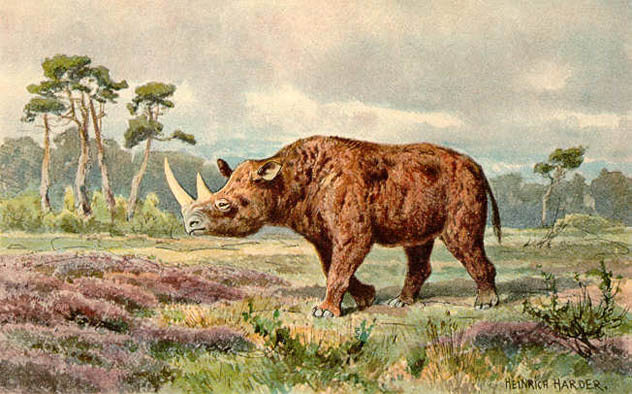 The 10,000-year-old remains of a woolly rhinoceros were discovered on a frozen Siberian riverbank in Yakutia. The rhino was nicknamed Sasha after the hunter who discovered it. Sasha was only a three- to four-year-old calf when it died and is the only complete baby woolly rhino ever found.

Although researchers have discovered well-preserved adult specimens of the species, young specimens have always been more difficult to find. Sasha was donated to the Yakutian Academy of Sciences in Russia for study. Though the woolly rhino lived during the same time as the woolly mammoth, and the two even shared a habitat, the two species aren’t related. The woolly rhino is a distant relative of the modern rhinoceros, while the woolly mammoth is related to the modern Asian elephant. 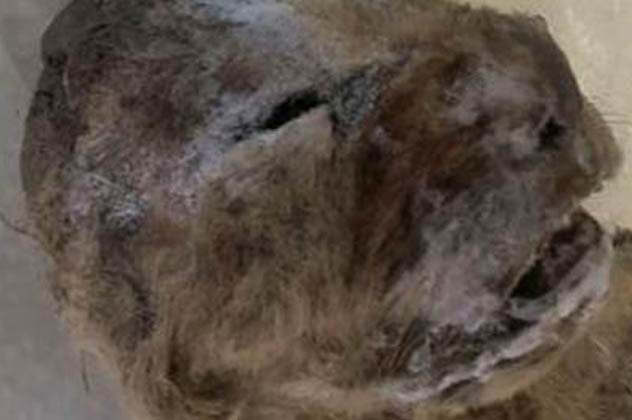 Apparently, Yakutia is the place to go for animal mummies (just in case you’re in the market). A pair of 10,000-year-old cave lion cubs were also discovered in this region in a Siberian ice sheet. The two cubs, dubbed Dina and Uyan, were barely a week old when they died. Experts believe that they were trapped in their den by a landslide, and the absence of air kept the bodies preserved.

Panthera spelaea was first described in 1810, and up until this discovery, archaeologists only had bones and animal tracks to go on. They’re the two best-preserved remains ever found to date, with their organs and even fur still intact. 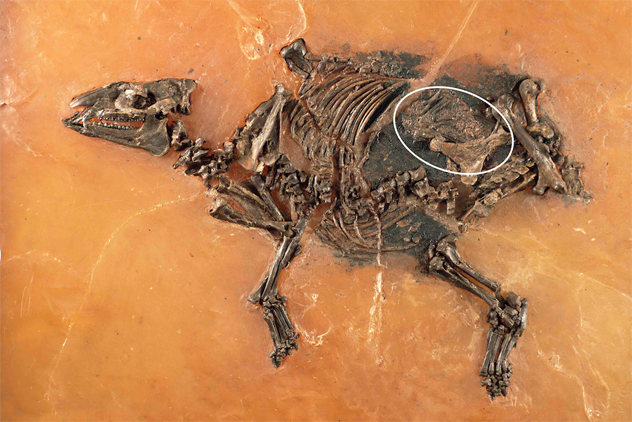 In 2000, remains belonging to distant horse ancestor Eurohippus messelensis were unearthed in the Messel Pit archaeological site near Darmstadt, Germany. The horse had been in the later stage of pregnancy when it died about 48 million years ago, and the fetus inside was very well preserved.

Researchers used high-resolution micro X-ray analysis and scanning electronic microscopy to learn everything they could about the fetus. They discovered that its placenta, internal organs, and even the contents of its stomach were still intact. To date, it’s the earliest and best-preserved fossil specimen of its kind. The ancient horse was about the size of a modern-day fox and had four toes on each of its four feet. 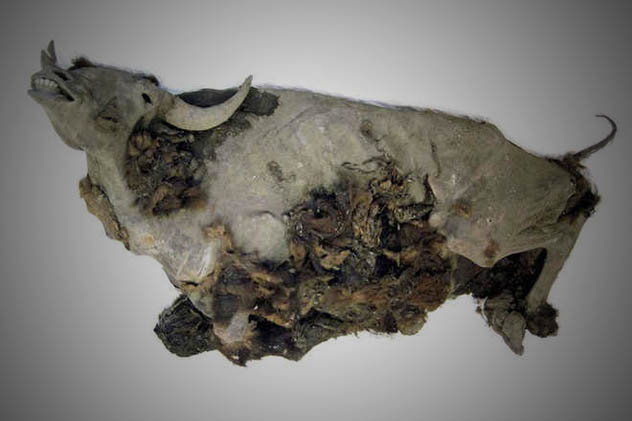 The mummified remains of Bison priscus, an ancient relative of the modern bison, were uncovered by a tribe in Siberia’s Yana-Indigirka Lowland. Northern Siberia’s freezing climate kept the bison from decomposing, and its brain and internal organs were almost perfectly preserved even after 10,000 years.

Olga Potapova, the collections curator and manager at the Mammoth Site of Hot Springs in South Dakota, helped to study the ancient remains. She told Live Science that it’s rare to find whole specimens in Siberia and North America. She said that usually “they’re partly eaten or destroyed because they’re lying in the permafrost for tens of thousands of years.” 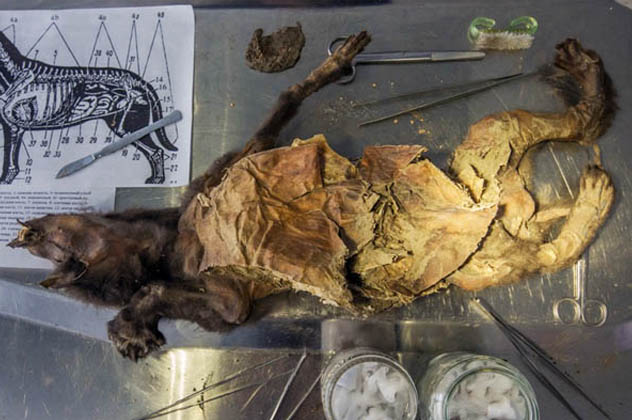 Normally when you tell a dog to “stay,” you don’t mean for over 12,000 years. This one was found on the banks of Siberia’s Syallakh River by brothers Yuri and Igor Gorokhov, who were hunting for woolly mammoth tusks.

The canine is believed to be about 12,400 years old. Experts have been examining the body, nicknamed the Tumat dog, for the past four years. However, an in-depth necropsy was only carried out in 2015. The organs were perfectly preserved, making it the most intact ancient dog body ever discovered. 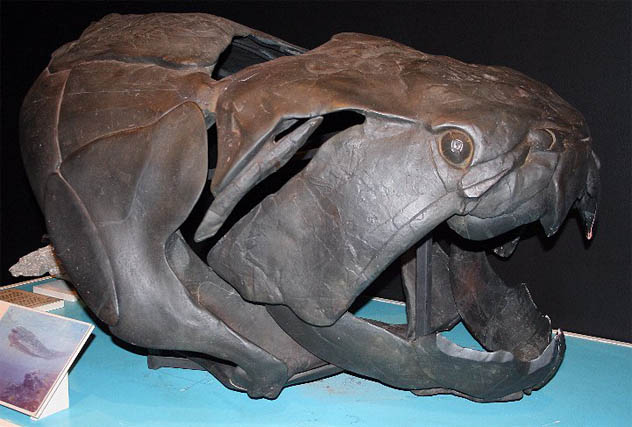 Dunkleosteus is the scariest prehistoric fish that you never knew existed. As far back as 380 million years ago, these heavily armored fish were common in shallow seas around the world. They were typically 9 meters (30 ft) long and weighed up to four tons, the largest vertebrate in existence at the time. Today, their remains are common on land and have even been found in California, Pennsylvania, Ohio, and Texas.

The head of a Dunkleosteus skeleton typically looks like that of a very angry leatherback turtle, since the two creatures share similar pairs of blade-like jaws. We owe the well-preserved structure of Dunkleosteus remains to their heavily armored skin that has held up pretty well these past several million years. 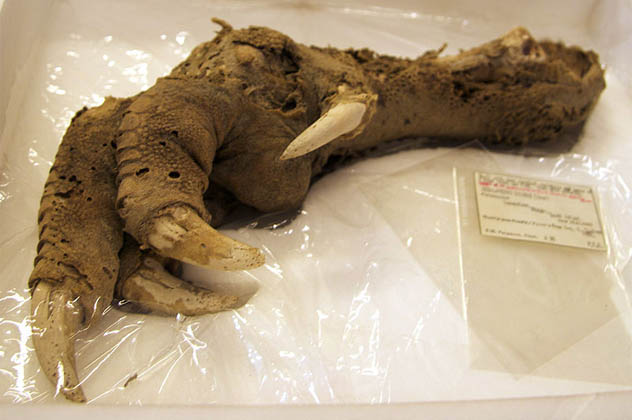 The moa (scientific name Megalapteryx) was a flightless, wingless bird native to New Zealand. The upland moa had feathers covering every part of its body except for its beak and feet. The moa were also the largest birds in existence at one point, which no doubt prevented them from being bullied by other animals for their otherwise goofy-looking appearance.

Research suggests that moa first appeared around 15.8 million years ago. They were the largest dominant herbivores in New Zealand, and their populations flourished before the arrival of Polynesians in the 13th century. They had only one predator, the Haast’s eagle, before the arrival of humans. Due to over-hunting, the moa disappeared about 500 years ago, around 1500.

During an expedition in New Zealand’s Mount Owen cave system, archaeologists discovered the mummified claw of an upland moa which still had its muscles and skin intact. The archaeologists took the claw in for analysis and were shocked to discover that it was 3,300 years old. The extinction of the moa was one of the fastest ever documented, with all nine species disappearing barely 100 years after the Maoris landed. Since the birds were flightless and slow to mature, they couldn’t reproduce fast enough to combat the Maoris’ hunting.

Tiffany is a freelance writer who hails from southern California. She enjoys science topics, following social issues, and perhaps spends too much time on Twitter. Speaking of which, you can follow her at @duafe.