In the world of robotics, much can be and has been learned from the world of nature. Not only is there a wealth of practical applications for robots based on biological organisms, but much can also be learned about evolution and the natural forces that produce such highly advanced designs. This line of research is leading to a fascinating melding of science and nature—sometimes in the most literal of ways.

Swimming robot for maintenance and inspections

The Eelume underwater robot serves an extremely practical purpose—performing inspections and maintenance on deep sea rigs, a costly and dangerous endeavor. The current generation of underwater autonomous vehicles that perform these duties are bulky, slow, and difficult to maneuver, but not the Eelume. It looks and moves just like a sea snake and can quickly and safely reach places no vehicle can.

While the machine is currently cabled, manufacturer Kongsberg Maritime—which recently achieved a bit of fame by finding a decades-old submerged monster prop in Loch Ness—is working toward making the machine’s power source internal, eliminating the need for a cable and thus any restraint on its range. 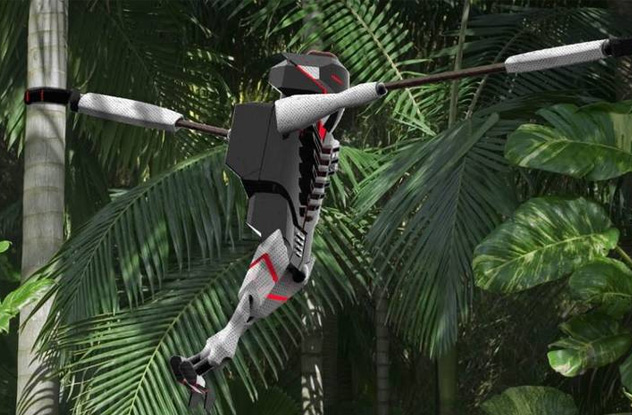 Roko is the one entry on our list that exists only in the design stage, with no prototype having yet been produced. But what a concept it is: a furry, biometric, fully robotic monkey that could penetrate deep into dense forests without disturbing wildlife.

The designer foresees a wide range of different functions. For example, Roko could operate autonomously to deliver small supply packages (like food or first aid kits) to remote encampments that can’t be reached by road. It could also act as a companion, being programmed to assist in navigation or continuously monitor the surrounding area for potential predators.

Roko will be covered in actual fur and move through the forest just as an actual monkey does, so it won’t startle native wildlife with its presence as would a human rescuer or a drone.

In the last decade or so, the honeybee population has rather suddenly and mysteriously fallen victim to Colony Collapse Disorder. The population has seen drastic yearly reductions, and nobody is sure exactly why. In June 2014, Harvard researchers came up with a potential means to help alleviate the effects of CCD while a more permanent one is found: tiny robot bees, which may soon be capable of carrying out crop pollination.

While the concept has been demonstrated and proven workable, a swarm of robot bees would have to be able to communicate among themselves and work as a team, just like a real swarm, and the Harvard team is not quite there yet. By their estimate, robot swarms may be out pollinating crops within a decade, helping the agriculture industry recover from the billions of dollars in yearly losses caused by colony collapse.

Georgia Tech biophysicist Daniel Goldman was tasked with designing a new generation of amphibious robots that can deal with the most challenging surfaces, like flowing sand and slippery mud. Goldman turned to evolutionary science: He built a robot that strongly resembles an African mudskipper fish, which spend time on both land and water in a manner similar to early land vertebrates.

The robot has demonstrated that its tail is not very useful for locomotion at all. Unless, that is, it is trying to navigate a slight, slippery incline, in which case it is very useful. The tail also helped keep MuddyBot from sliding back downhill in such situations.

Tendons in the legs of kangaroos act like springs, recovering some energy and recycling it into the next jump, giving them remarkable stamina. German engineering firm Festo chose a direct route to demonstrating how this concept could apply to machinery by literally building a kangaroo.

The prototype is gesture-controlled, using a commercially available, sensor-laden armband of the type that can be used to control drones. No word on whether these will be made available to the public, simply by virtue of being fun to have around.

Robotics firm Boston Dynamics has been involved with the creation of human- and dog-like robots for military or civilian use. Their latest creation, SpotMini, is primarily intended as a household companion and looks like a dog-sized robot giraffe.

The appearance comes from its head-arm combo, which is extremely versatile and has some odd capabilities (SpotMini can fix its “head” in one position while the rest of the body moves around it, for example). The head-arm can grasp objects and right the unit if it falls over.

SpotMini can run for an hour and a half on a single charge and can easily navigate environments it is likely to encounter in the average home. While it will make for a fun novelty, there may also be some very useful applications in helping care for the disabled and elderly.

At the Institute for Computational Design in Stuttgart, Germany, researchers recently created what they call a “Mobile Robotic Fabrication System for Filament Structures.” The system deploys teams of tiny robots with spools of carbon fiber, which work together to weave nifty things like hammocks. In designing their system, engineers mimicked the design of nature’s own weavers for their tiny robots: spiders.

The team plans to scale the system up, using more robots to complete even more complex designs and are working on giving them the ability to cling to curved or slippery surfaces.

Cockroach robots to the rescue!

UC Berkeley biomechanist Robert Full has spent years studying the movements of animals and their potential applications toward robotics. Intrigued by the ability of cockroaches to squeeze into practically any space despite having a hard shell, Full investigated and found that roaches use a unique movement. Then, they took what they learned and built a robotic roach.

The RoboRoach is part of an emerging field of soft robotics, which uses pliable materials like polymers in place of metal and hard circuit boards. The robotic insects, cheap and easy to manufacture, performed just like real roaches do in tight spaces, and could be used in disaster areas, war zones or other dangerous areas to help locate those in need of help or evaluate the stability of such areas before human rescue workers enter.

The problem of nuisance birds has long been one with no real solution. Birds often like to stick around once they’ve found an area they like, and excess foraging and crop damage are not even the most serious issues. Birds can also disrupt flight paths and spread disease.

Enter Clear Flight Solutions, a company that has put forth a product they are calling the “RoBird.” It’s a lifelike model of a raptor, and in tests, they’ve been shown to reduce nuisance bird activity in targeted areas by up to 50 percent. This is because the robot features realistic wing movement, and birds are naturally inclined to register the shape of another bird’s silhouette and the movement of their wings to determine whether they are predators.

The RoBird can also be used to single out and chase away particularly stubborn birds. While they are currently controlled wirelessly by an operator on the ground, an autonomous version is currently in development.

An international team of scientists headed by Harvard researcher Kit Parker produced an artificial stingray that mimics the swimming motions of the real thing. While this may seem par for the course compared to the other entries on this list, their stingray is not technically a robot. It was constructed with both artificial and biological components, and in the truest sense of the word is actually a cyborg.

The team used a neutrally charged gold skeleton, overlaid by a thin polymer skin. Woven throughout are over 200,000 cells derived from rat hearts, called cardiomyocytes. Photosensitive versions of these cells are lined up on top of the stingray, and its navigation is controlled by changing the frequency and pulses of light directed toward it. Light also causes its muscles to contract, supplying the downward motion of the fins. The gold skeleton has energy storing properties, helping supply the downward motion.

Not only could research of this type lead to significant advancement in newer generations of automated robots, but it could also help us gain a better understanding of the human heart and other fluid-moving muscular functions. It could even pave the way for future iterations of lifelike, cyborg animals—or even humans.