Children’s toys of today are incredibly advanced. Plush toys are cute and snugly, most robotic toys are of extremely high quality, and dolls resemble either endearing little babies or little grown-up versions of humans. Yet in the past, children were not so lucky. Questionable toys that were sure to harm the psyche were common, and killer dolls were all the rage. 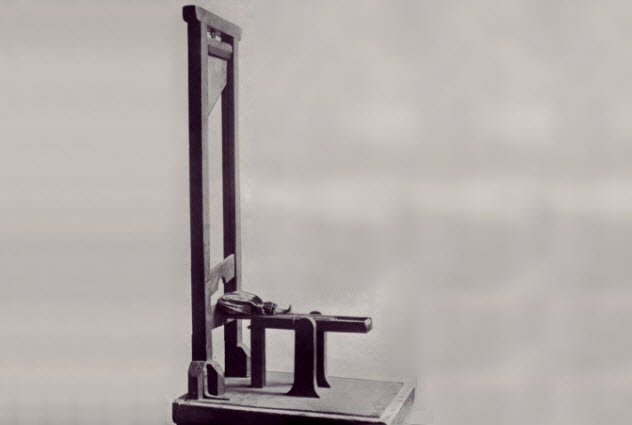 During the French Revolution, guillotines that were 0.6 meters (2 ft) high were a popular children’s toy. Children used them to chop off the heads of dolls, birds, and mice. Interestingly, some salon hostesses also used these toys to amuse their guests. Small “enemy” dolls were filled with “blood” (perfume) and decapitated.

When the mother of German writer Johann Wolfgang von Goethe was asked to buy such a violent toy for her grandson, she replied furiously:

Buy such an infamous instrument of murder! That I wouldn’t do at any price. If I were in authority, the makers would have been put in the pillory. And the machines themselves I would have had publicly burned by the hangman. What! Let children play with such a horrible thing? Put murder and shedding of blood into their hands as a pastime? No. No good can come of that.

In the 1970s, American shops reintroduced the violent toy. But after parents protested, the terrifying toy guillotine was removed from the market for good. 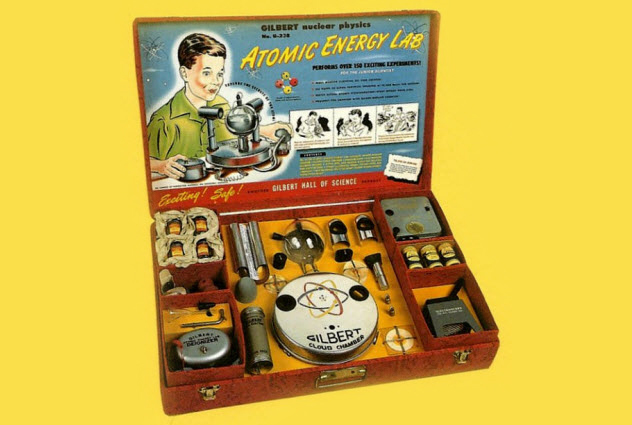 The Gilbert U-238 Atomic Energy Lab was an elaborate nuclear lab set produced for children in 1951. It cost $50 (approximately $350 in today’s dollars) and included three “very low level” radioactive sources, a Geiger-Muller radiation counter, a Wilson cloud chamber (to see the paths of alpha particles), a spinthariscope, four samples of uranium-bearing ores, and an electroscope (to measure radioactivity).

Alfred Carlton Gilbert, the inventor of the set, claimed that the radioactive materials provided in the set were absolutely safe. Today, however, we know that exposure to the U-238 isotope is linked to cancer, leukemia, lymphoma, Gulf War syndrome, and other serious ailments. Fortunately, the terrifying radioactive learning set ran for only one year—from 1951 to 1952—before it was taken out of circulation. 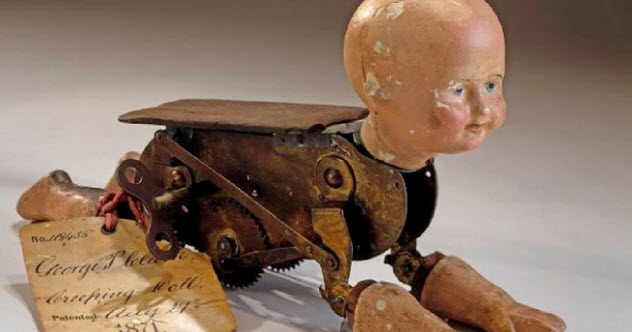 Patented in 1871, the “creeping baby doll” was an extremely creepy Victorian doll that was supposed to depict a crawling baby. Although it was the first crawling children’s doll, it did not appeal to little girls because it looked extremely scary, weighed a lot, and wasn’t interactive enough.

Still more disturbing, crawling was known as “creeping” before the mid-1800s and was seen as an activity of animals and crazy people. (Standing tools were used to encourage children to stand and walk from a very young age.) But sometime in the mid-1800s, crawling became normal and dolls with clockwork elements became popular. 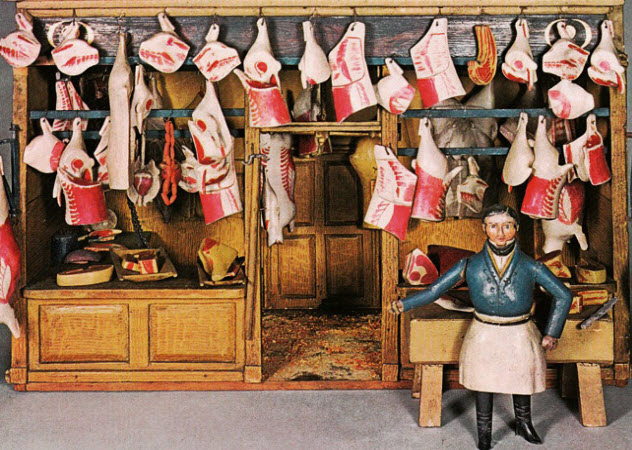 In Victorian times, gruesome-looking, doll-sized butcher shops were all the rage as an alternative to regular dollhouses. Although they looked quite terrifying, they were incredibly popular with less squeamish children.

These butcher shops were an exact representation of actual butcher shops and included wooden butchers and their assistants in striped aprons, strings of sausages, whole miniature carcasses hanging from real iron hooks, and floors covered with sawdust and blood.

A doll-sized butcher shop might seem rather shocking to us today. But in Victorian times, it was akin to the supermarket playset of today, both with the purpose of learning about money and food. 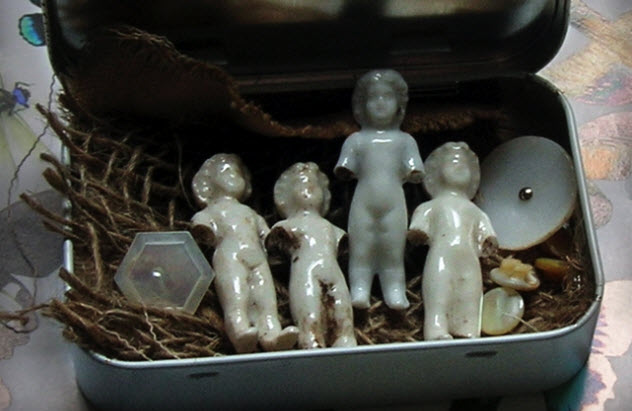 Tiny, unglazed porcelain dolls with no movable limbs were first manufactured in Germany in 1850 and sold as playmates for babies during bath time. However, the tiny white dolls soon became associated with a popular poem of the day called “Young Charlotte,” written by Seba Smith. The poem was about a young woman who froze to death on New Year’s Eve as she was riding in a sleigh with her sweetheart. The tiny German doll quickly became known as “frozen Charlotte” in America.

The dolls cost only one penny each. If having a doll that represented a frozen woman was not scary enough, they often came with their own coffins and blankets. In Britain, frozen Charlottes were often baked into cakes and puddings as a (creepy) surprise for kids at Christmastime.

5 Hugo, Man Of A Thousand Faces 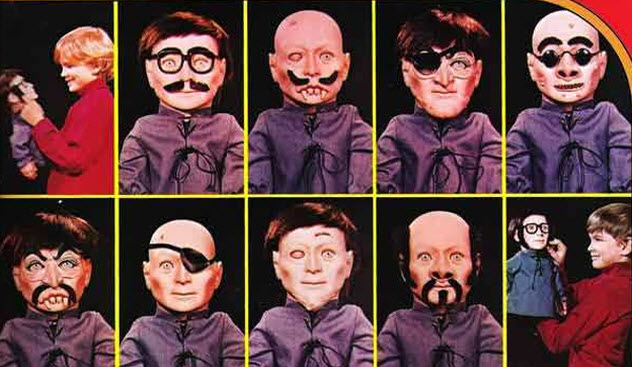 In 1975, US toy company Kenner introduced Hugo, Man of a Thousand Faces, for children 5–11 years old. Not only was Hugo bald-headed and barefaced, he was also only half a man whose body ended at the cuff of his blue shirt. Hugo’s head was made of soft rubber, and his arms were stuffed with cotton. If you pulled a string attached to him, you could make his arms move.

Hugo came with disguises that could be glued onto him (or onto yourself) with a special glue. Hugo’s popularity didn’t last beyond the 1970s, however. Perhaps this was because special glue sticks for sticking on disguises didn’t last long (and ordinary glue could not be used instead). Or perhaps it was just because he was so darn scary. 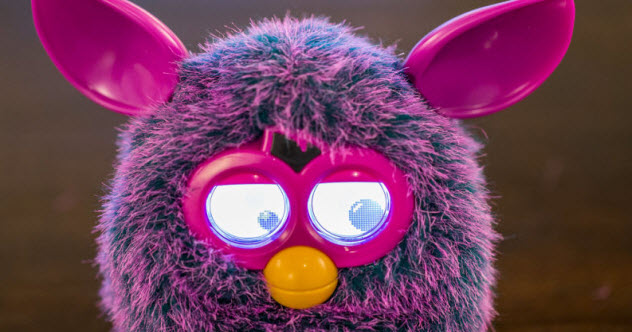 The Furby first appeared on US toy store shelves in 1998 and instantly caused a furor. Within three years, 40 million units had been sold.

Furbies were small, robotic, furry toys that resembled owls with giant ears. They could talk and sometimes turned on completely by themselves. Most of the noise they emitted was in the form of their own native language as well as screeches and grunts. However, they spoke some English, too. Supposedly, the more you talked around them, the more words and phrases they picked up.

It is said that Furbies spoke to you during the night when you thought they were off. Sometimes, they spontaneously spoke even after their batteries had long been removed.

The Internet is full of horrifying stories involving these seemingly innocent creatures. With removed batteries nonetheless, they woke up children in the middle of the night with phrases such as “Do you want to play?” Today, nostalgic adults who were kids in the 1990s can rejoice because the Furby is back on the market. 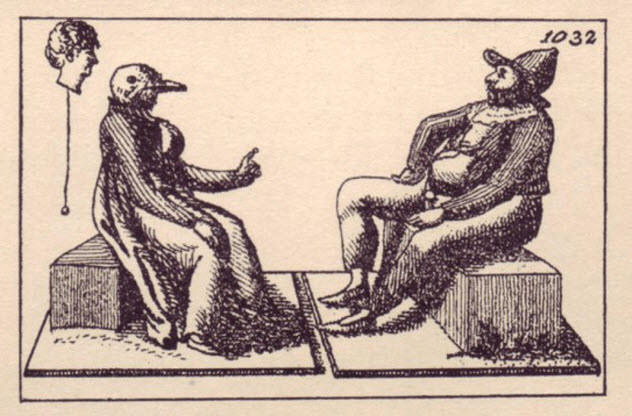 Back in the 18th century, German toys could be rather creepy. Take the live bird automata, for example, which were displayed in the Nuremberg catalog. Each automaton was a comic figure with a hollow space inside for the purpose of holding a bird. As the bird struggled inside the automaton, it gave the toy figure all kinds of motions.

The catalog boasted that “no one would imagine that a living bird was inside but would suppose that it was clockwork which made the head, eyes, and beak of the bird move.” Whether the poor creature was removed from the automaton after the toy was tossed aside remains a mystery. Perhaps only the smell of rotting meat alerted the kids that a new live “clockwork” was needed.

Baby Secret was a creepy doll manufactured in 1966 by the Mattel toy company. About 45 centimeters (18 in) tall, it had a soft baby body and a vinyl head. It wore a red dress and a white bib and had an open mouth which moved when it talked. The doll’s whisper feature worked when her pull string was pulled, and her voice was extremely terrifying and lifelike.

The commercial for the Baby Secret doll was just as scary as the doll itself. It included the creepy, demonic doll whispering phrases such as “I want to tell you something” and “I like to sleep with you.” 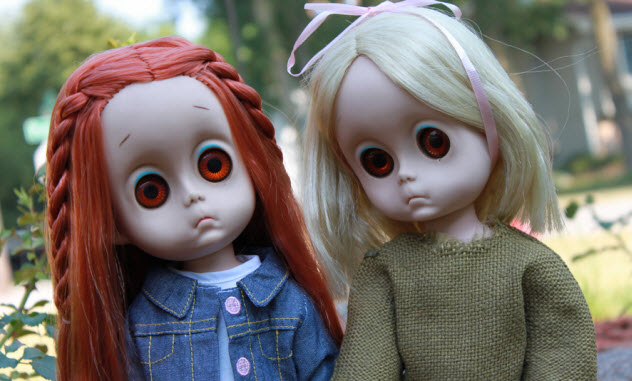 Little Miss No-Name was a doll that was marketed by Hasbro toy company in 1965. The barefoot doll came dressed in a ragged burlap sack and had enormous unblinking eyes and a taut little mouth. When extended, one of her hands made Little Miss No-Name look like she was begging. She also had a plastic tear on her cheek.

The doll was supposed to tug at the heartstrings of little girls, but it had quite the opposite effect. Little girls wanted to run away screaming upon seeing the creepy Little Miss No-Name.

Hasbro discontinued production of the doll after only one year, although they tried offering her in a promotion with Borden’s Dutch hot chocolate as a final attempt at popularizing the doll. For some reason, however, children did not see the connection between a comforting cup of hot chocolate and the creepy doll.