Pablo Escobar—the Cocaine Kingpin, the Godfather, the Tsar of Cocaine. There are many names associated with his legacy, but there are also many contradictions.

A pillar of the Colombian community, he had sympathy for those he felt had been let down by the government. Yet the truth, as detailed by family members and those who spent years tirelessly attempting to hunt him down, tells a very different story, one of a cold-blooded assassin who stopped at nothing to make his billions. This is the real sinister legacy of Pablo Escobar that nobody should forget.

10 He Stole Tombstones To Make His First Fortune 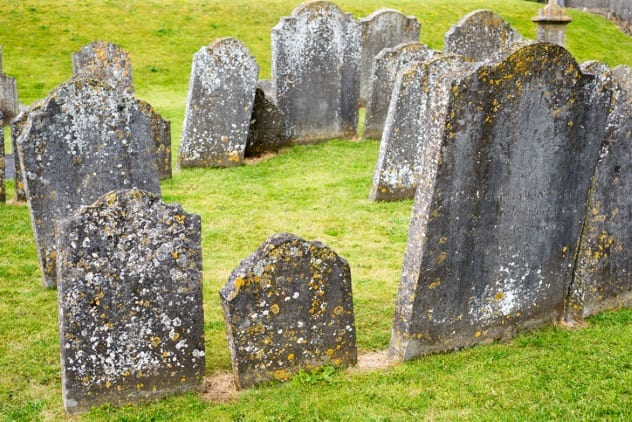 For Escobar, business always came before morals, and that was a rule he stuck by from the very beginning. Born December 1, 1949, in Rionegro, Colombia, and raised in nearby Medellin, he was a child of an era known as La Violencia, during which there was much political unrest and poverty. Escobar wanted a different life for himself; it is said that one of his first illegal enterprises was robbing tombstones from local graveyards, sanding down the names, and selling them to Panamanian smugglers.[1] Escobar stated that by the age of 22, he would be a millionaire—he never had a doubt.

In the early 1970s, Escobar had developed a versatile criminal career working as a thief and a bodyguard. But, like many up-and-coming drug lords, he desired to be a cartel leader, and much bloodshed had to take place to get him there.

9 He Used Hit Men To Do The Job 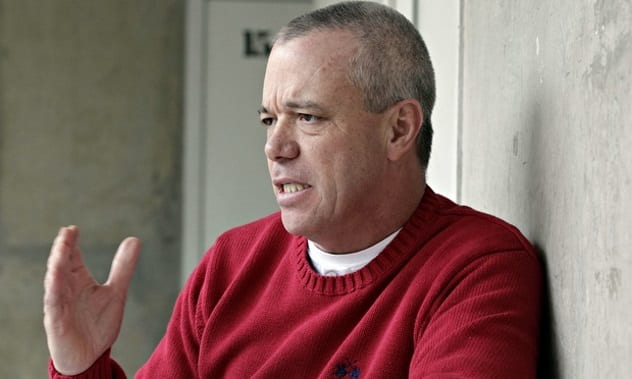 In order for Escobar to rise to the top of his game, he had to incite terror in both his colleagues and his competition. Rarely was there blood on his own hands; instead, he controlled a network of hit men. His top hit man was John Jairo Velasquez, also known as “Popeye.” One of Popeye’s most notable hits was the assassination of presidential hopeful and anti-drug-trafficking crusader Luis Carlos Galan in 1989. After Popeye was convicted for his role in that hit, he confessed to participating in around 300 murders and ordering some 3,000 others.

Popeye told Bocas magazine, “I had to kill a bus driver. The mother of a friend [of] Pablo Escobar was on his bus and he accelerated as she was getting off and she fell. He left her lying on the floor, he didn’t help and she died.” He added, “The guy asked Pablo Escobar to help him get his revenge. I found the [driver] and killed him. I didn’t feel anything. I haven’t lost any sleep over the acts I’ve committed.”[2] In 1992, Popeye was sentenced to 52 years in prison, yet despite his staggering body count, he was paroled in 2014.

8 He Hid Behind His ‘Robin Hood’ Image 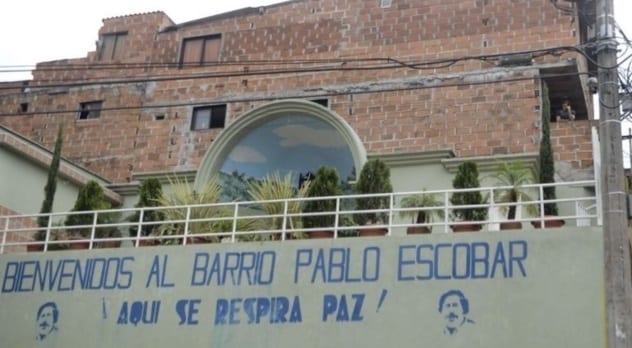 Unbelievably, during his reign of terror, Escobar was also looked upon as a Robin Hood-like figure. He built schools and sports fields for the local communities, donated large sums of money to charity, funded people’s medical expenses, and built houses for the poor. His construction, Barrio Pablo Escobar, still exists today and houses more than 12,000 people in 2,800 homes; there are even images of him at the site with the sign: “Welcome to Barrio Pablo Escobar. Here, you breathe peace.”

He never missed a PR opportunity and dreamed of one day becoming Colombia’s president. In his own uncle’s newspaper, one anonymous admirer said, “His hands, almost priest-like, drawing parabolas of friendship and generosity in the air. Yes, I know him, his eyes weeping because there is not enough bread for all the nation’s dinner tables. I have watched his tortured feelings when he sees street children—angels without toys, without a present, without a future.”[3]

Javier Pena, a former DEA agent who successfully tracked down Escobar, said, “People loved him and that often got in our way. Many in Colombia looked up to him as a God but he was just a master manipulator.” 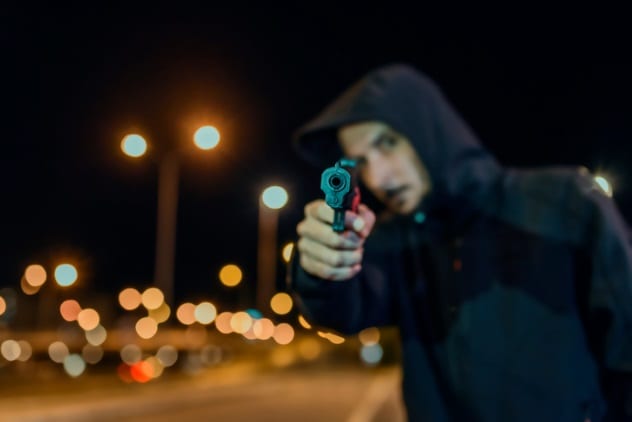 In 1989, Medellin reportedly had the highest homicide rate in Colombia. In that year alone, more than 2,600 people were brutally murdered in a city with a population of two million.

According to Charles Anthony Gillespie, who was the US ambassador to Colombia between 1985 to 1988, the city was under the control of the narcotics empire, and the daily slayings were out of control. He said:

A class of assassins had developed in Colombia. They are called sicarios (hired assassins) in Spanish. These are kids, often street kids who were basically brought up in small gangs where they learned how to kill people. They were tested by being given a gun. They would go out and get on a motorcycle, ride up behind somebody, put their gun as near as they could to the back of someone’s head or the rear window of the car, and blast away. Or they would do that when the car was stopped at a light. If the car is not armored or does not have some armor plate, that’s goodbye to the victim. That’s the end of it.

Medellin had basically gone over to the narcotics traffickers. [ . . . ] During the three years that I was in Colombia, I made two trips to Medellin but did not spend the night there. It wasn’t considered safe.[4]

6 He Killed 107 People Aboard A Plane 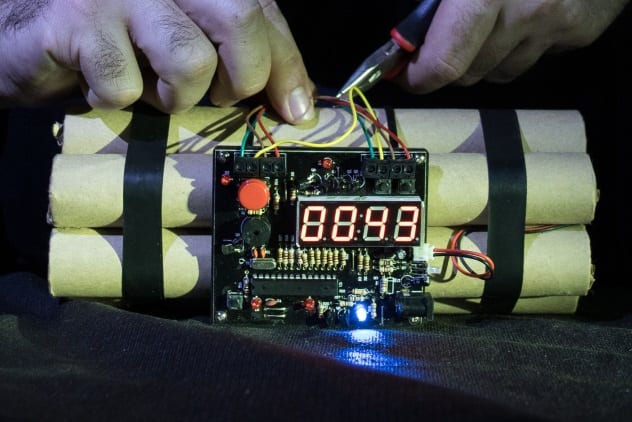 In 1989, 101 passengers and a crew of six were all killed during an explosion on Avianca Flight 203, which was bound for Cali.[5] The Boeing 727 crashed near Bogota, and the event was the deadliest single criminal attack to occur in Colombia for decades. Escobar had planned the explosion in the hope that it would kill the presidential candidate, Cesar Gaviria Trujillo. However, Trujillo was not on the flight and went on to become president of Colombia. The bombing also resulted in the deaths of two Americans, which led the Bush administration to begin their hunt for Escobar to bring him to justice.

A witness who called Radio Caracol shortly after the crash detailed, “I heard explosions and I thought there was some problem with transformers in the electrical station, but I looked up and saw a plane explode in the air, and bodies and pieces of luggage were falling.” 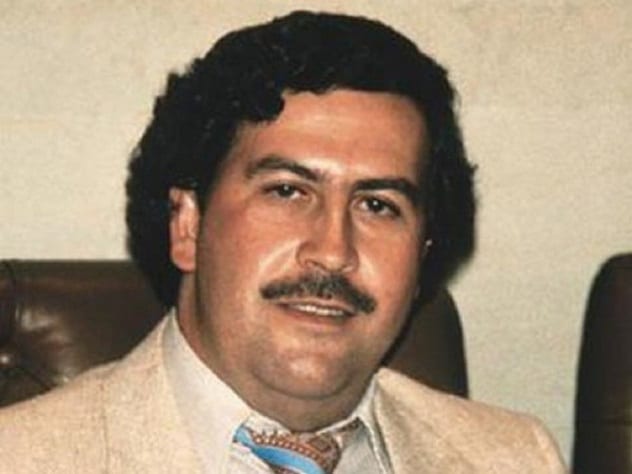 In early 1993, another one of Pablo Escobar’s bombs killed 20 shoppers—including four children—and injured around 70 other victims. During peak time at Northern Bogota’s Center 93 mall, a remote-controlled bomb placed in a stolen van was detonated outside a bookstore where young children were shopping for school supplies. A presidential spokesperson said, “We have now had confirmation from military intelligence that Escobar planned and carried out the bombing.”

Escobar, who was a fugitive at the time, had warned the Colombian government that he would cause mass panic unless he was granted the same political rights as the country’s left-wing guerrillas. President Gaviria said of the attack, “Intelligence information indicates that the narco-terrorist Pablo Escobar and what is left of his murderous organization are responsible for this murderous act. But the government and the citizenry will not let themselves be intimidated.”[6] 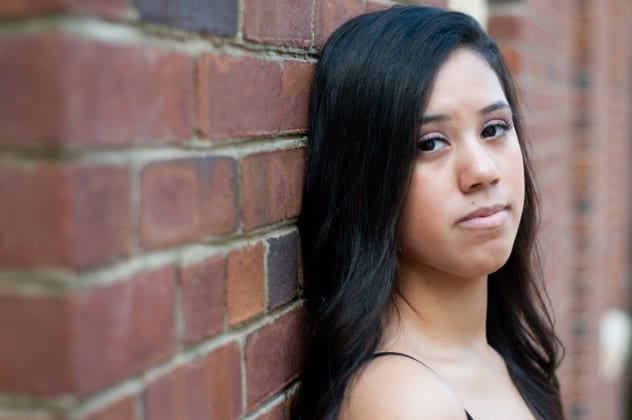 In 1991, he built his own private luxury prison, La Catedral, where he could serve his sentence after surrendering but still continue with his illegal operations. Even the Colombian police were not allowed within 5 kilometers (3 mi) of the facility. It had also been reported that Escobar continued to have young girls delivered to his luxury prison for his own private entertainment.

3 His Family Went Through Hell

Even after his death, Escobar’s wife and son had to move to Argentina, where they lived in exile. His wife Maria Henao changed her name to Maria Santos Caballero, and his son Juan Pablo became Juan Sebastian Marroquin Santos. In 2000, they were both arrested for money laundering and sentenced to 15 months in jail before being released due to insufficient evidence. Escobar’s wife said, “I am a prisoner in Argentina for being Colombian. They want to try the ghost of Pablo Escobar because they want to prove that Argentina is combating drug trafficking.”[8]

Juan Sebastian also spoke about his father to Euronews. He told them, “It seems to me that the image of Pablo Escobar has been used to tell stories about him that are not true. As his son, it’s up to me to tell the truth about Escobar. It’s not a truth that benefits me—quite the contrary—it’s a truth that makes my father look even worse than how he is shown in the movies.”

Escobar was so feared that he was able to bribe even the highest-ranking politicians, officials, and judges. His motto was “Plata o plomo,” meaning “silver or lead”—those who could not be bribed with money would be shot and killed.

As Mark Bowden, author of Killing Pablo: The Hunt for the World’s Greatest Outlaw, described it:

Between 1976 and 1980, bank deposits in Colombia’s four major cities more than doubled. So many illegal American dollars were flooding into the country that the country’s elite began looking for ways to score its share without breaking the law. President Alfonso Lopez Michelsen’s administration permitted a practice that the central bank called “opening a side window,” which allowed unlimited quantities of dollars to be converted to Colombian pesos. [ . . . ] The government played along by turning a blind eye.[9]

1 His Own Brother Turned Against Him 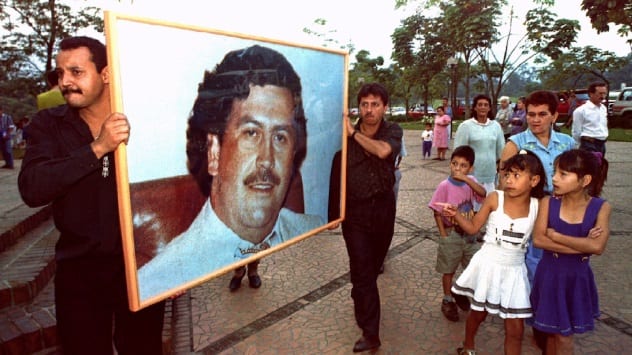 During the takedown of Escobar, he was turned on by his own brother, former accountant Roberto Escobar. Juan Sebastian Marroquin Santos, Pablo’s son, wrote in his book, Pablo Escobar: My Father, “My uncle Roberto Escobar, the official informant of the DEA, actively contributed to delivering him to his enemies. Him, his siblings, and even his own mother. It is a story that I’m not proud of, and I wish it had been a story about family values, respect, and company, and affection, but sadly it was not like that.”[10]

The paramilitary group Los PEPES, which stands for “People Persecuted by Pablo Escobar,” the Cali Cartel, the US and Colombian governments, and Roberto split the Medellin cartel and made those closest to Escobar into his enemies. On December 2, 1993, after 16 months of chasing Escobar, he was traced by a phone call made to his son and gunned down on a rooftop in Medellin. More than 25,000 locals held a funeral procession for the kingpin. After his death, the New York Daily News reported the “locals wailed and moaned, hailing the dead drug lord as a savior of the poor.” His grave in Cemetario Jardins Montesacro, Itagui, is the second-most-visited tomb in South America.