Crime is so old that it’s a struggle to track down the first instance of any offense. But the search for such milestones is certainly informative. Somehow, the Romans seem more human when you know that they weren’t strangers to mooning. 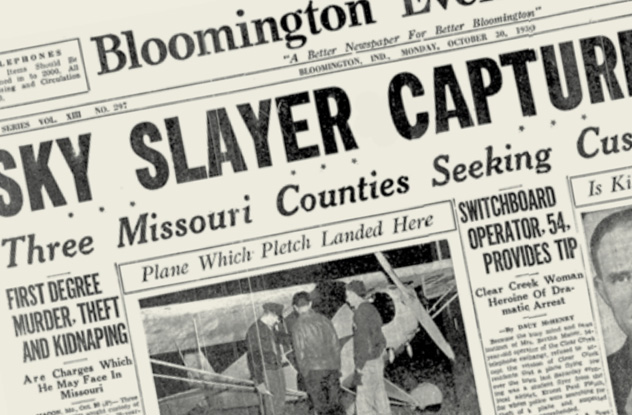 It is nearly always claimed that the first plane hijacking of an aircraft occurred in 1931, when armed revolutionaries in Peru surrounded a plane that had just landed in Arequipa. To call this a hijacking is a bit of a stretch, however. The pilot, Byron Richards, refused the hijackers’ orders to take off with them onboard. After a two-week standoff, he was told that the revolution had been successful and that he was free to leave.

The first fatal aircraft hijacking on record took place in the United States on October 27, 1939. Earnest Pletch, who was receiving flying lessons from an instructor named Carl Bivens, dreamed of flying solo—so much so that he pulled a revolver from his pocket mid-flight, and shot his instructor in the back of the head. He then landed the plane, dumped Bivens’s body, and flew homeward.

Pletch had long been alienated from his family, and he later stated that he had planned to fly the plane into the side of his father’s barn. He never went through with this, however, and upon landing, he was promptly arrested and jailed for murder. 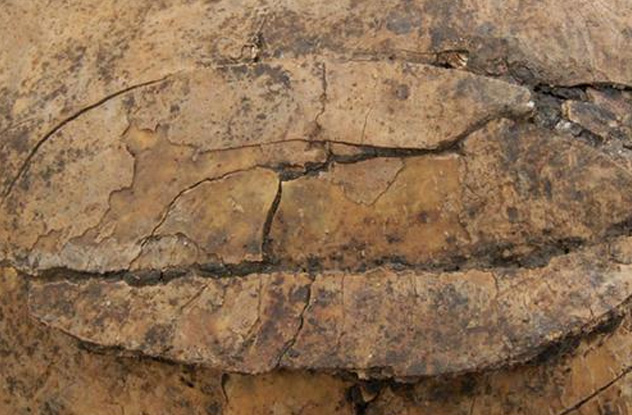 The first record of a prehistoric battle dates from around 13,000 years ago. The site in northern Sudan, known as Cemetery 117, is also one of humanity’s earliest formal graveyards. Of the 61 skeletons unearthed there, 45 percent show evidence of inflicted wounds—making this “the earliest evidence for inter-communal violence in the archaeological record.”

It is not until 5,000 BC that we find evidence of needless damage inflicted upon human casualties. At least 26 skeletons found in a pit at Schoneck-Kilianstadten were killed with arrows or blunt weapons. Significantly, these skeletons also show signs of mutilation (most notably, the systematic breaking of lower limbs). The absence of younger women in the grave suggests that the victims were captured during warfare and transported before being killed, which means that the mutilation may have occurred before death. 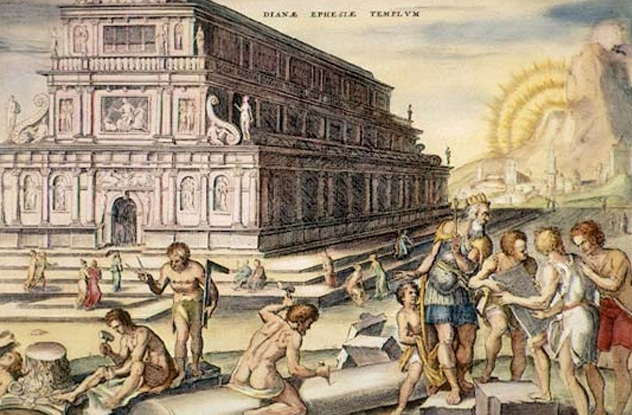 The enormous Temple of Artemis at Ephesus, built by King Croesus, was considered to be one of the seven wonders of the ancient world. But in 356 BC, it was burned to the ground by a man named Herostratus.

The motive? Herostratus simply wanted his name to go down in the history books. In response, the Ephesian authorities promptly executed him and suppressed all mention of his name, under penalty of death. Despite this, a book by Theopompus secured Herostratus’s place in history as the first recorded arsonist. 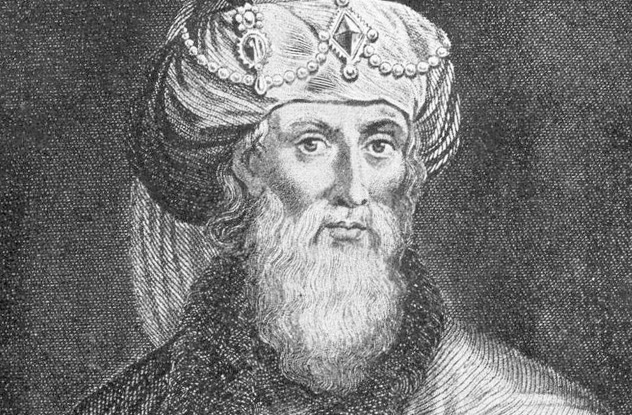 Though mooning (the act of baring one’s buttocks) did not become common until the Middle Ages, the earliest recorded case dates from Roman times. According to the Roman historian Josephus, a Roman soldier mooned a passing group of Jews who were celebrating Passover. It was not so much the mooning itself but the act that accompanied it that caused offense. As Josephus delicately puts it: “One of the soldiers, lifting up the back of his garments . . . With his bottom to them crouched in a shameless way and released at them a foul-smelling sound.”

The result was a riot that caused the deaths of more than 30,000 people—so besides being the earliest, this was perhaps the most lethal mooning in history. 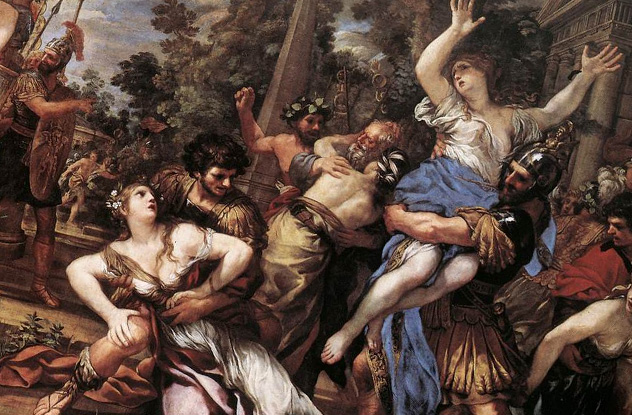 At some point in the 10th century, Vikings kidnapped a Native American woman and brought her to Iceland—an American set foot on Europe around 500 years before Columbus did the opposite. We also know, thanks to the Code of Hammurabi, that slavery existed as early as 1750 BC in Mesopotamia. The code tells us that anyone who tried to rescue or steal another person’s slave would be punished by death. This system of slavery almost certainly involved kidnapping, but no specific accounts survive.

The earliest specific case of a kidnapping was the famous Abduction of the Sabine Women in 750 BC. Supposedly, in the days when Rome was still a village, there was a distressing shortage of women. This did not bode well for the future of the settlement, so the Romans invited the entire population of the neighboring Sabines to a festival, snatched up the virgins among them, and forced them into marriage. Naturally, this sparked a regional war, which the Romans won—putting them on track to become Europe’s most powerful empire. 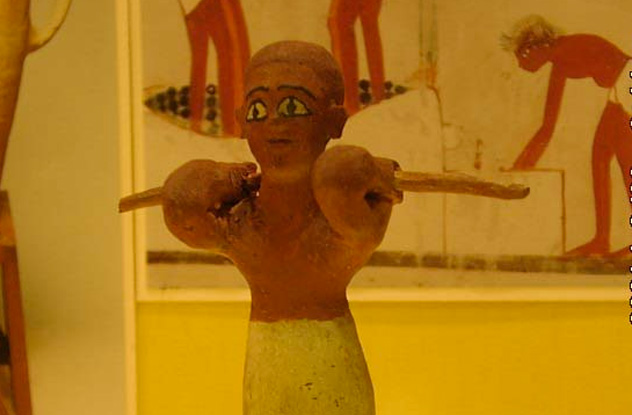 The earliest reports of torture come from Egypt, where whipping was used as a means of interrogation. Torture as a form of punishment was also rife: Anyone who committed parricide, the most taboo crime, was rolled naked through thorns and then burned alive. The practice of torture continued in Ancient Greece and Rome. (Interestingly, a Roman slave’s testimony was only valid in court if extracted by torture—slaves were unreliable unless in great pain.)

The Mosaic Code (written around 1,000 BC) lists a range of tortures familiar to us today. This code first introduced the idea of punishing adultery with stoning. And in Machabees 13:5–6, we find one of the earliest descriptions of the torture of a specific person. A high priest named Menelaus, who had offended the Syrian king, was thrown into a large tower filled with ashes and left to slowly suffocate to death. 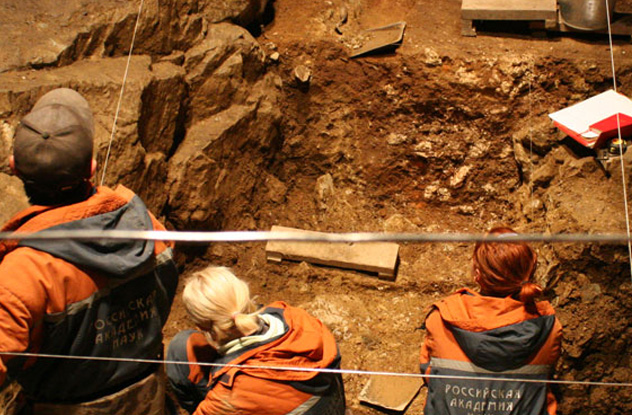 The first known homicide occurred a whopping 430,000 years ago in northern Spain, when a pre-modern human (probably either H. Heidelbergensis or H. Neanderthalensis) was hit in the head twice with a blunt instrument.

The shattered skull was found among other bone fragments in a limestone cave known as Sima de los Huesos, or “the pit of bones,” deep in the Atapuerca Mountains. Only after piecing together the skull fragments did scientists realize that they had stumbled upon the world’s oldest cold case. The nature of the damage suggests that the victim died of his or her injuries, which may have been caused by a wooden spear or stone axe. 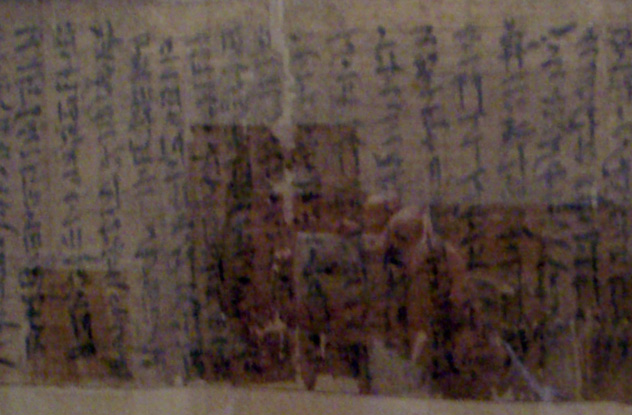 One of the earliest reported cases of suicide was that of Empedocles, an Ancient Greek philosopher born around 492 BC. Legend has it that he jumped into the crater of Mount Etna, hoping people would think he had become a god. The effect was spoiled when one of his trademark bronze sandals was ejected by the volcano and discovered.

Around 1,500 years before Empedocles’s dalliance with volcanos, a man in Egypt penned what is now considered to be the oldest surviving suicide note. Known as The Debate Between a Man and His Soul, the note explores the man’s reasons for being tired of life. “Behold, my name is detested,” writes the author, “more than the smell of vultures on a summer’s day when the sky is hot . . . To whom can I speak today? Men’s faces are averted.” 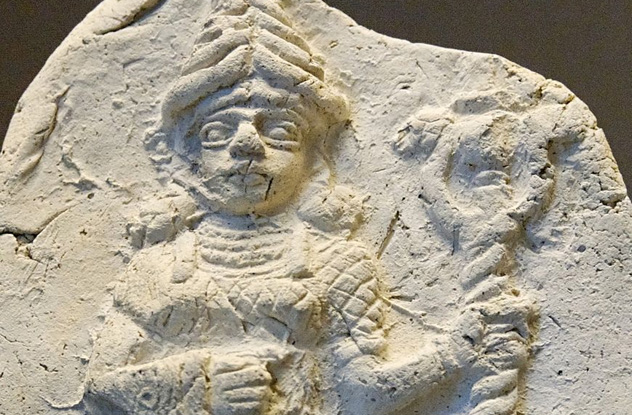 Herodotus tells us that the Babylonians had a custom whereby all women, no matter how high-born, had to give their bodies to the goddess Mylitta at least once in their lives. They sat inside the temple and were required to sleep with whichever man desired them. All proceeds, of course, went to the goddess rather than the woman.

But it is among the records of the Sumerians, dating from 2400 BC, that we find the earliest instance of prostitution as a profession. Priestesses of the goddess Ishtar would give their bodies to men who donated to her temples. Far from being criminals, these priestesses were treated as something like holy sex therapists, enabling their clientele to enjoy the powers of Ishtar directly. 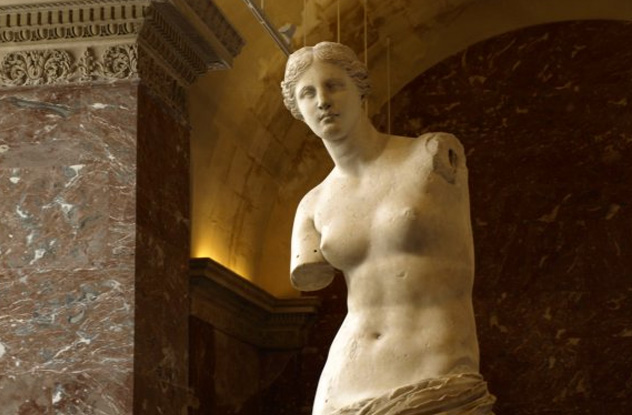 Many of us are already familiar with the genocide that probably wiped out the Neanderthals. A 2009 study of the remains of a Neanderthal man, killed by a spear thrown at him at a time when only humans threw spears, added to a mounting body of evidence that Neanderthals met their end at the hands of Homo sapiens.

The earliest recorded case of state-backed genocide, however, is the massacre of the inhabitants of Melos by the Athenians during the Peloponnesian War. When the Melians refused to surrender, the Athenians put all the men to death and sold the women and children as slaves. As for the justification, no one sums it up better than the Athenians themselves: “The strong do what they want, and the weak suffer what they must.”

The history of crime and detection is a fascinating subject; that’s why Listverse has published many great lists covering those topics in the past. Here are a few you might like: 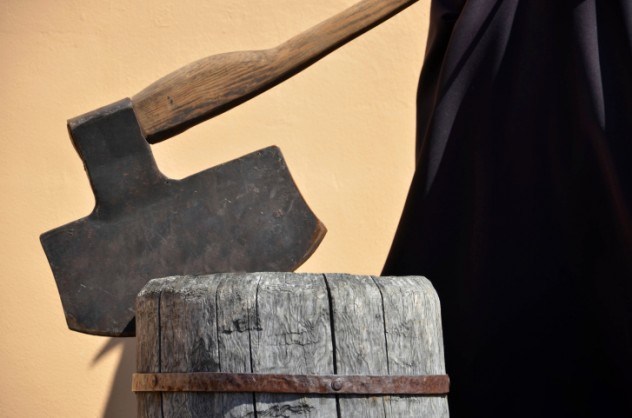