In the past, the use of coins was much more varied. They were used for commerce, of course, but also for purposes of social exclusion or for healing. They could even be used to express love.

The most common theory suggests they were used for admission into brothels. The picture side depicted the pleasures on offer, and the number side stated the chamber where these pleasures were to be provided. Alternatively, the numeral could have depicted the price of the sexual act, eliminating language barriers. Spintriae were used instead of ordinary coins to circumvent the law that bringing currency bearing the emperor’s image into a brothel was treason.

However, some claim that it is unlikely that spintriae were used as brothel tokens for numerous reasons, such as their appearance in bathhouses but never in the ruins of actual brothels. Perhaps they were tokens in a game whose rules are unknown to us.

From the Middle Ages to the early 18th century, it was believed that scrofula (a disease of the lymph nodes) could be treated, and sometimes even cured, by a monarch touching the infection. Of course, monarchs did not actually want to touch victims of the disease. Thus was born the alternative practice of a monarch touching a gold coin that could be later pressed to the infected area.

Coins became known as “touch pieces.” Gold coins known as an “angel” were the most typical choice. The reverse side of an angel coin depicted the archangel Michael standing over a defeated Satan, symbolizing the triumph of good over evil.

In 1714, George I, who regarded touch pieces as a Catholic superstition, abolished the ceremony. 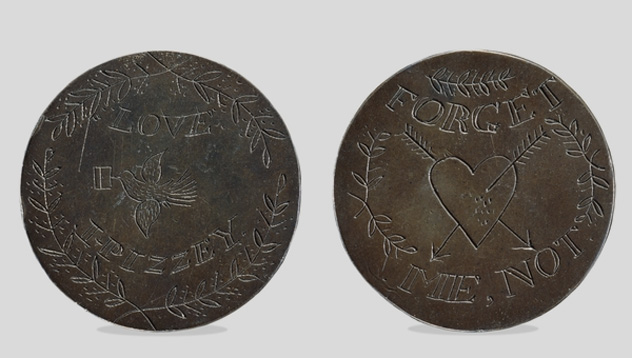 Leaden Hearts were love tokens crafted by British convicts moved to Australia and Tasmania during the late 18th and the early 19th century. Most sentences were to last 7–14 years, so convicts wanted to leave some sort of forget-me-not to their loved ones.

Leaden hearts were made by smoothing a coin on one or both sides. The coin was then engraved with a message of affection meant for the convict’s loved ones. The engraving work was done with a series of small pin pricks and often included the names of the convict and their loved one, the length of separation, as well as phrases and rhymes of separation. 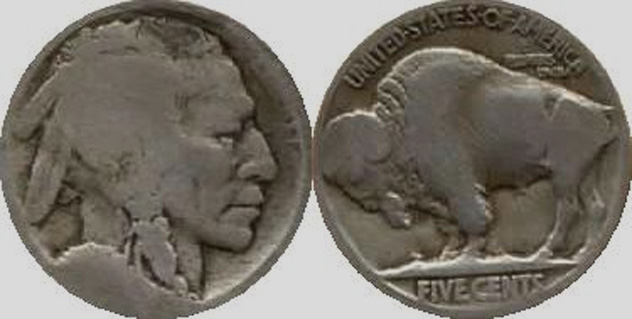 Coins have always been favored as an artistic medium. In 1913, for example, the Buffalo nickel became extremely popular among coin carvers. It provided a larger and thicker canvas to work on than before, so more detailed pieces could be created. Buffalo nickels were also cheaper to work on than quarters.

Carving and selling Buffalo nickels became a common occupation within the transient community and was an especially useful means of extra income during the Great Depression. The carved Buffalo Nickels became known as hobo nickels due to the widespread belief that hobos started carving them on long train rides. 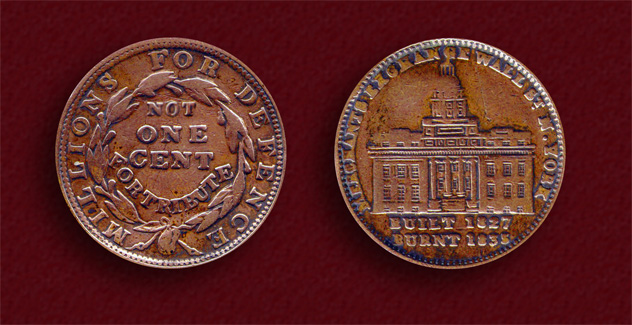 Hard-times tokens were minted privately from 1832–1844 as unofficial currency, meant to alleviate the shortage of coinage during the American economic depression of 1837–1844.

They were divided into three main categories. The first consisted of political propaganda, mostly for and against Andrew Jackson and his vice president, Martin van Buren. For example, one quoted van Buren’s inaugural speech as “I follow in the footsteps of my illustrious predecessor” and portrayed a running jackass (representing Jackson) leaving hoof prints behind.

The second category of hard-times tokens consisted of store tokens featuring advertisements. The third were cent look-alikes. Practically all were similar in size and composition to the large cents that they were meant to replace. 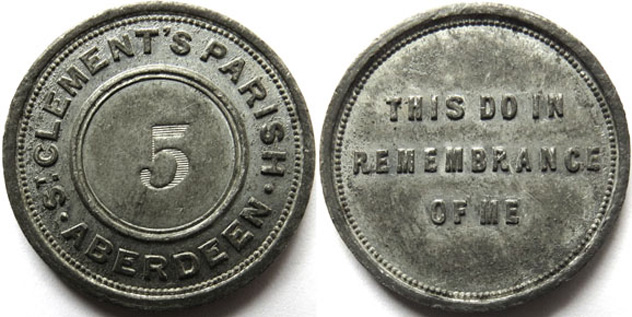 During the 18th and 19th centuries, some churches in the northeastern United States commissioned special coin tokens to be used in churches only. These were issued to stop counterfeit copper coins, as well as extremely worn coins, from getting into the collection plates. Once the church had bought these tokens, it would sell them on to parishioners, who could then donate them without the fear of upsetting the church.

The First Presbyterian Church of Albany, for example, issued 1,000 such tokens in early 1790. Each was engraved with a circle of scallops and the motto “Church Penny.” The reverse side of the coin was blank. 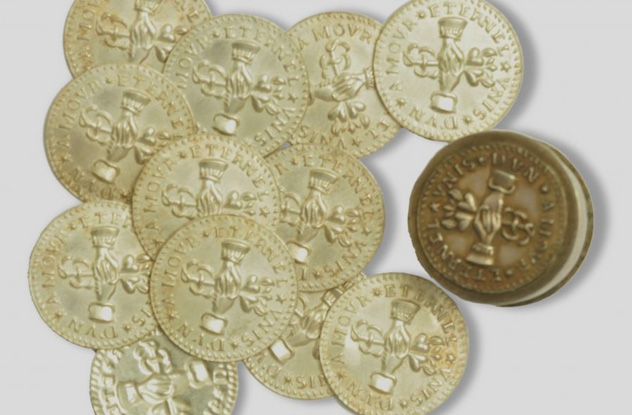 Trezains were 13 coins carved specifically for marriage in France from around the 16th century and possibly earlier. Even though carved with symbols of love such as double flaming hearts and handshakes, they were considered legitimate currency by merchants.

The groom gave the bride trezains as symbolic compensation for the goods or the land she brought to the union. During the wedding, the trezains were blessed by a Catholic priest. The total number of the coins represented Jesus and His twelve apostles. Between one to three coins were given to the priest, while the others were meant to be kept as a keepsake by the newlywed couple. However, they were almost always spent in times of hardship. 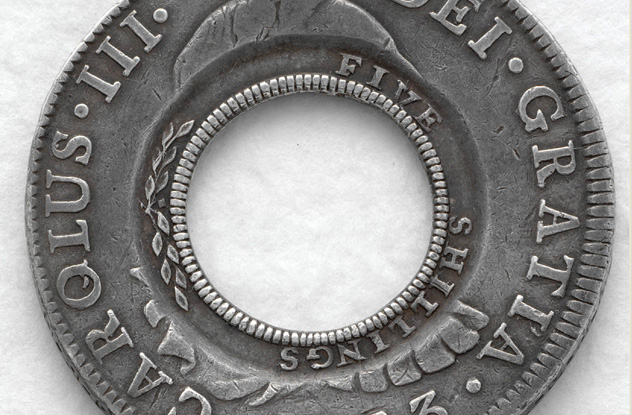 Almost immediately after the colony of New South Wales was founded in 1788, it ran into coinage difficulties. Foreign coins were common, but the majority left the colony through trade. Lachlan Macquarie, the governor of the new colony, soon came up with a creative solution.

In 1812, Macquarie imported 40,000 Spanish reales and had the convicted forger William Henshall cut out the center of each. The result both doubled the number of coins available and prevented their export.

The coins were counterstamped and brought into circulation in 1814. Eventually, the outer ring came to be known as the holey dollar and the center as the dump. In 1822, they were replaced with sterling coinage. 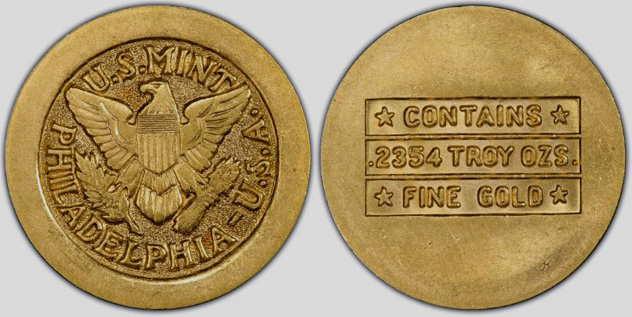 Saudi Arabian bullion coins were minted in Philadelphia by the United States Mint in 1945 and 1947. At the time, the Arabian American Oil Company (Aramco) was set up in Saudi Arabia by four American oil companies. Each year, Aramco had to pay $3 million in royalties to the Saudi government. The contract specified that the payment had to be made in gold. At the time, the dollar was governed by a gold standard, and for some time, the Saudis accepted payment in United States currency. However, by 1945, they insisted for payments in gold.

Aramco, faced with the prospect of either a cut-off of much of Middle Eastern oil or the increase in the price of oil, turned to the United States government for help. As a solution, the American government minted 91,210 large gold discs bearing the Great Seal’s eagle. The Saudi Arabian bullion coins thus looked like coins, and they were used as coins, yet they weren’t technically coins.

The coins were shipped off to Saudi Arabia, and most were later melted down into bullion. 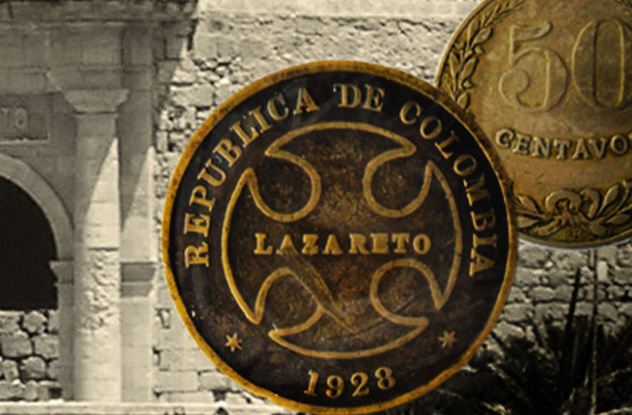 Back in the day, leprosy was believed to be contagious and was one of the most feared diseases in the world. Victims were often forced to leave their homes and spend the rest of their lives in colonies known as Lazaretos.

These isolated sanatoriums surrounded hospitals for contagious diseases. But people still feared that leprosy could be transmitted through money, so special currency was developed specifically for leper colonies.

Leper colony coins started in early 20th-century Colombia and then spread to other countries and regions such as the Philippines, Japan, and Panama. At some point, these special leper coins also existed in Brazil, China, Costa Rica, Korea, Nigeria, Thailand, and Venezuela. 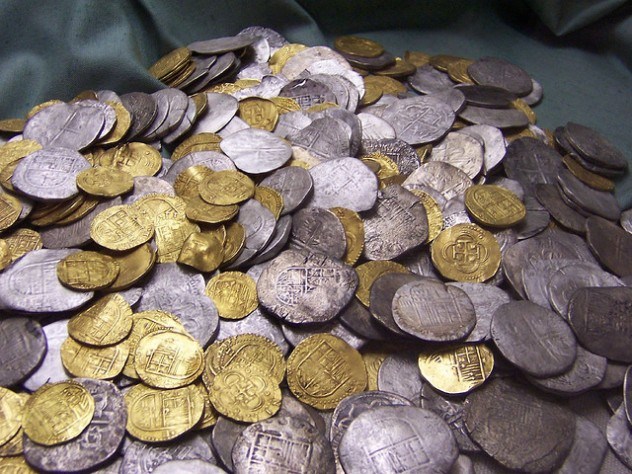 Money, coins, treasure! We’ve covered them all before and here are a few from the archives you’ll definitely love: