Though their skills and ingenuity are often underrated by more modern minds, our ancient forebears were quite adept at construction, building structures that have stood to this day. Here are 10 such examples. 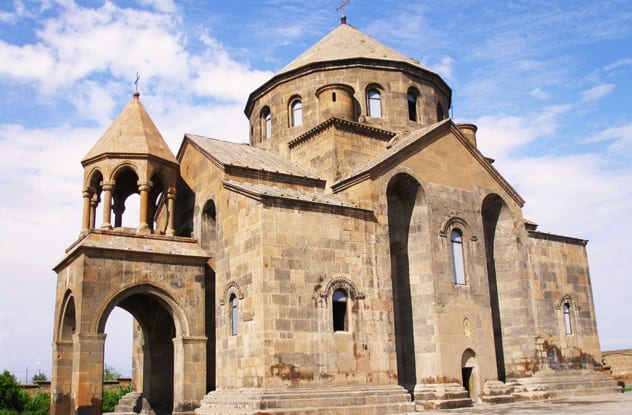 The first nation to adopt Christianity as its official religion, Armenia is home to several revered sites of the religion. One such building is the Saint Hripsime Church, built in the seventh century. A UNESCO World Heritage Site, and rightfully so, the church was commissioned to replace a mausoleum which had been erected in honor of Saint Hripsime.

Hripsime played an important role in Armenia’s Christian history, for she was a devout believer. Around AD 300, she lived in a Roman monastery as a hermit, along with 35 other women. Eventually, after fleeing the affections of the Roman Emperor Diocletian, Hripsime ended up in Armenia, where her beauty caught the eye, and fury, of the pagan Armenian king Drtad. When she refused, King Drtad had Hripsime and all her female companions tortured and killed. Later, after he had successfully converted the Armenian king to Christianity, St. Gregory the Illuminator, the founder of the Armenian Apostolic Church, built the first chapel to honor Hripsime. 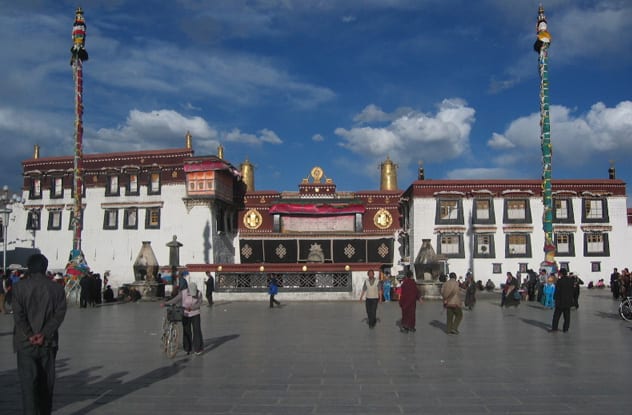 Generally considered the most sacred temple in Tibet, the Jokhang is a Buddhist temple located in the capital city of Lhasa. Though the exact date of its construction is up for debate, AD 639 is as good an estimate as you’re going to find. According to Tibetan legend, their king at the time, a man named Songtsan Gampo, got married to two different women: Princess Bhrikuti of Nepal and Princess Wencheng of China.

His new brides brought with them a statue of the Buddha, and Gampo was delighted and sought to build a temple to house the Chinese statue. Stoked by jealousy, Princess Bhrikuti demanded one for her statue, and the Jokhang was constructed. Further legends about the temple say it was built on the bed of a dried-up lake, itself above a sleeping demoness whose heart was imprisoned by the construction of the Jokhang. Though it has undergone significant expansion and renovation since it was first built, most of the core parts of the temple date back to its original construction. 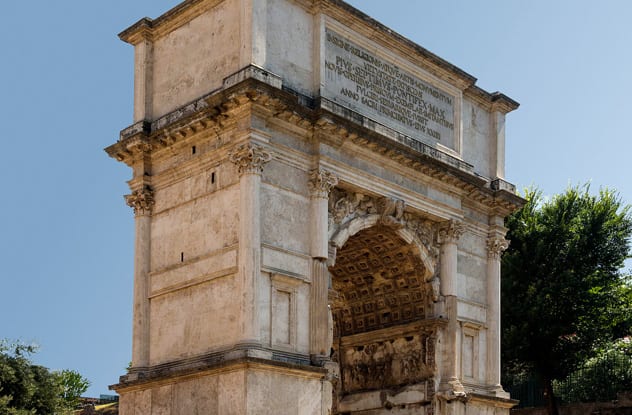 Like many of the greatest feats of early architecture, the Arch of Titus was built to honor a man and, in this case, that man was the Roman Emperor Titus. Though his reign was brief, lasting only two years, Titus was considered a good ruler, as well as a renowned military commander; he was responsible for capturing Jerusalem and destroying the Second Temple. The Arch of Titus commemorates that feat, with the south panel depicting Titus and his men taking spoils from the Jewish people. The north panel illustrates Titus’s own triumph granted to him thanks to his victory.

Located on the Via Sacra (“Sacred Road”), it was constructed by Titus’s younger brother Domitian after he succeeded his brother in AD 81, and the Arch of Titus became a model for future arches, most notably the Arc de Triomphe in Paris. And, although it’s known as a triumphal arch, many similar constructions honor things besides military victories, including the building of city infrastructure. 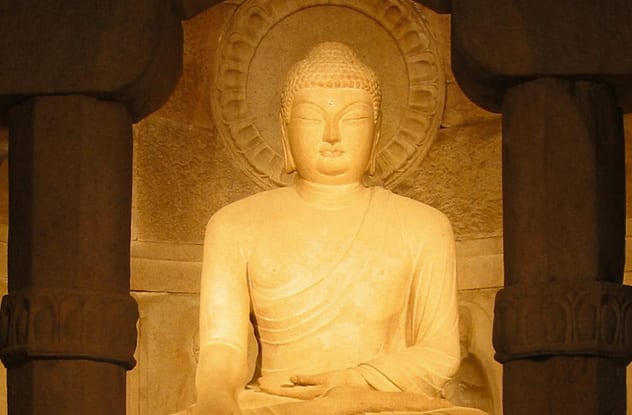 Seokguram, or the Seokguram Grotto, is a hermitage built on the slopes of Mount Toham in Korea, containing within its walls a rather large statue of the Buddha. Designated a World Heritage Site, it was built in the eighth century by Prime Minister Kim Dae-seong, who wished to honor his parents, both of his current life and his previous life. (The nearby Bulguksa Temple was built for the same reason, filial duty being what it is.)

Unfortunately, Kim died before either one of his projects was completed, missing out on the innate beauty of their design, especially the sculpted devas, bodhisattvas, and disciples, which are widely regarded as some of the finest examples of East Asian Buddhist art. Unfortunately, thanks to the deleterious effects of weather, as well as the constant threat of clumsy tourists, the interior of the grotto has been sealed off with a glass wall. 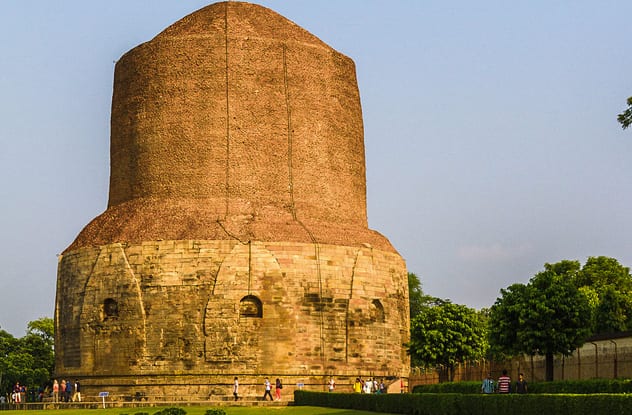 For centuries, rulers in ancient India had been honored by having their remains encompassed by a large rounded structure known as a stupa. Once the Buddha came around, he decreed that enlightened ones should be honored in the same way. One of the oldest in the entire country is the Dhamek Stupa, located just outside of Sarnath, a city in the northeast of India. (The word stupa is Sanskrit for “heap.”)

The Dhamek Stupa was built under the guidance of one of India’s greatest kings, Ashoka, a man responsible for the propagation of Buddhism across the continent. It’s also one of a handful of monuments built to honor the Buddha, with the Dhamek Stupa marking the spot believed to be where the Buddha gave one of his earliest sermons.

5The Royal Mausoleum Of Mauretania
3 BC 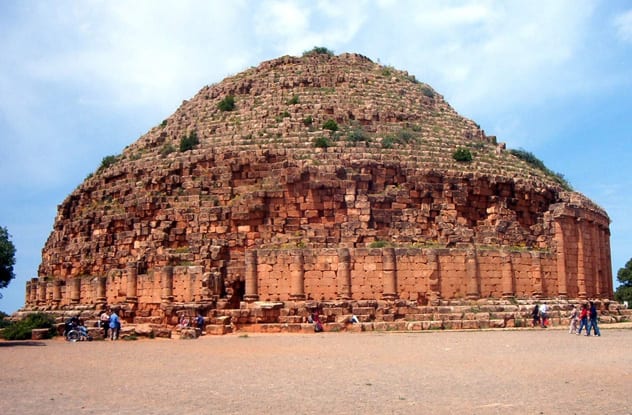 Located near the famed city of Algiers in Algeria, the Royal Mausoleum of Mauretania was built for two of the last rulers of the ancient kingdom of Mauretania, Juba II and Cleopatra Selene II. (Their son Ptolemy was the last ruler.) It is no coincidence the mausoleum bears a striking resemblance to one built by the Roman Emperor Augustus, for Juba II wished to create a sign of his allegiance to Rome.

Known by several different names, including “the tomb of the Christian woman” thanks to a cross-like shape on a false door, the mausoleum has suffered a great deal of misfortune throughout the centuries. Vandals and thieves destroyed or stole much of the ornate decorations once littering the grounds, and various rulers have tried to destroy it. It wasn’t until Emperor Napoleon III declared it a site to be protected in 1866 that the mausoleum was finally safe. However, since it was declared a World Heritage site in 1982, several factors, including poor maintenance and endless vandalism, have put this marvel of early architecture at risk of being destroyed. 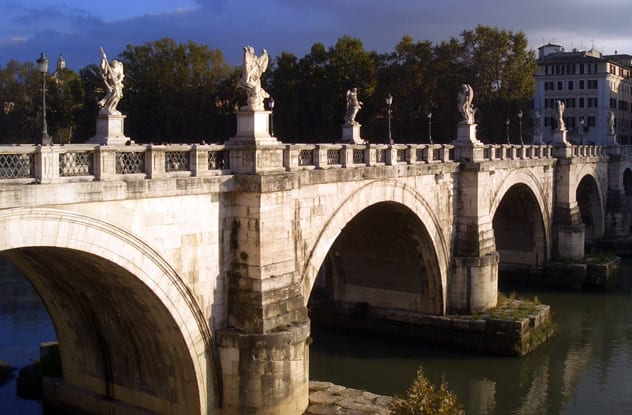 Constructed under the reign of the Roman emperor Hadrian, better known for the wall he had built to mark the northern limit of Britannia (as well as keeping out those darn Celts), the Ponte Sant’Angelo is a still-standing bridge located in Rome. Originally known as the Pons Aelius (“Bridge of Hadrian”), the name was changed sometime in the Middle Ages, after the Archangel Michael was said to have appeared to Pope Gregory the Great in AD 590.

One of the finest bridges still standing in all of Rome, the Ponte Sant’Angelo was built to connect the Campus Martius, a public square in ancient Rome, to Hadrian’s mausoleum, which is now known as Castel Sant’Angelo. In addition, the original Roman statues were replaced in the following centuries, with angelic statues designed and mounted by Gian Lorenzo Bernini in 1688. 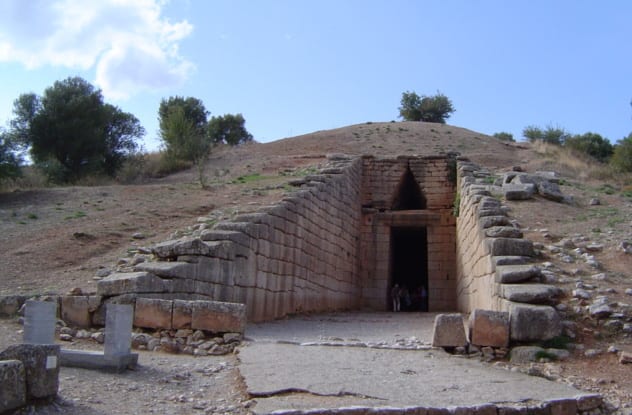 Sometimes called the Tomb of Agamemnon, the Treasury of Atreus is a tholos, a beehive tomb built in Mycenae, Greece. Perhaps the greatest feat of Mycenaean architecture still standing, the tomb’s builder is unknown, with the legendary Mycenaean king Atreus or his son Agamemnon commonly cited as ordering the construction.

The Treasury of Atreus, along with one other tomb at Orchomenus, is unique in that a side-chamber is connected to the main vaulted chamber. Though the true purpose may never be uncovered, a prevailing thought is that less illustrious family members had their bones collected there. 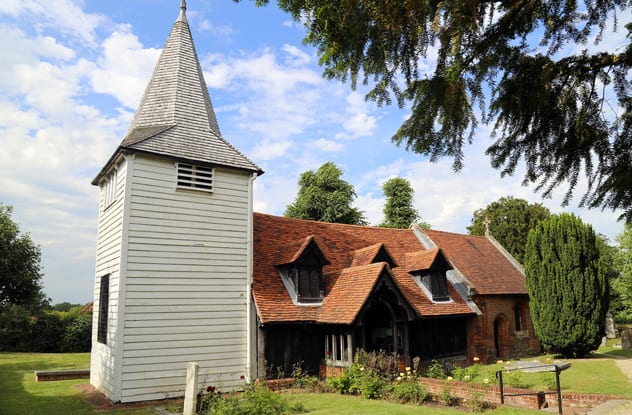 Not only is the Greensted Church the oldest wooden church still standing, it might even be the oldest wooden structure in all of Europe. To be fair to buildings such as the House of Bethlehem in Switzerland, much of what is left of the Greensted Church is much newer than the original construction date. In fact, the only things that remain are the tree trunks which form the nave.

Its most prominent feature, the tower, was added sometime in the 1600s, with various construction and reconstruction happening in the centuries afterward. Though not particularly noteworthy when compared to other places of worship, the Greensted Church did host the body of Saint Edmund, England’s first patron saint, for a night. 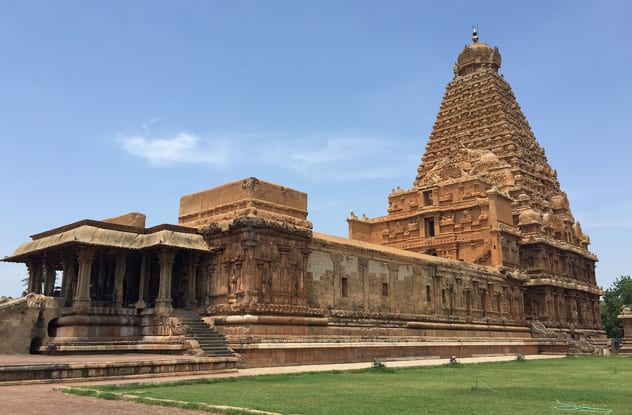 One of the largest temples in India, Brihadeeswarar Temple is dedicated to the Hindu god Shiva and is located in Thanjavur in the eastern part of the country. The oldest temple made completely of granite (nearly 130,000 tons), the temple is also known as Rajarajeswaram, named for the Chola king Rajaraja I who is believed to be behind its construction.

A World Heritage Site, along with two other Chola temples, Brihadeeswarar Temple is an incredible feat of engineering. In fact, the Shikharam (“crown”) at the top of the temple was carved from a single stone and weighs over 80 tons and sits atop a tower 30 meters (100 ft) high. 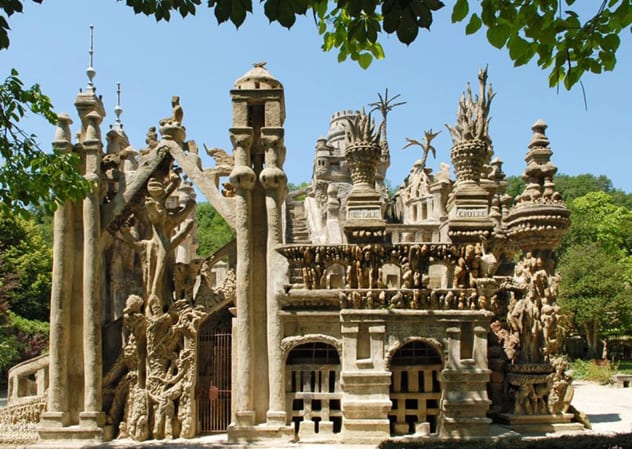 The accomplishments of our ancestors are made even more striking by our own seeming inability to build anything of quality these days! Here are some more lists from the archives that show off the amazing talents of those who have gone before us: