The octopus is one of the most recognizable and intriguing animals on Earth. They pull spectacular escapes and become social media darlings. Like famous people, some individuals even get their own movies and conspiracy theories.

They come with mysteries, too. From peculiar mass strandings to dreams revealed on octopus skin, there is still so much that scientists cannot explain about these cephalopods.

10 They Get Oxygen Blindness 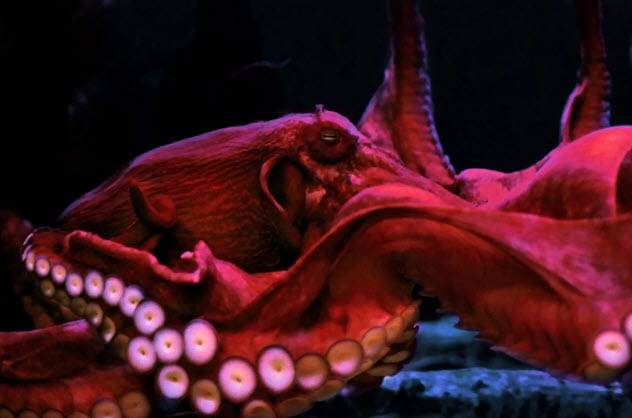 During the day, several Pacific species hide in the depths from predators and the Sun. By night, they travel to the surface to feed. In 2019, researchers picked the larvae of such creatures, including octopuses, crabs, and squids. They wanted to test how oxygen levels affected their eyesight.

Oxygen is needed to turn light particles into sight. The deeper an octopus goes, the more deprived conditions become. Tests confirmed that oxygen was more critical to cephalopod vision than anyone had realized.

Researchers monitored the creatures in tanks by using tiny electrodes attached to their eyes and bright light as a visual cue. For 30 minutes, oxygen was reduced from 100 percent air saturation (water surface levels) to 20 percent (lower than the creatures’ habitat depths).[1]

The results were worrisome. All the cephalopods and crustaceans suffered great vision loss, with some turning completely blind. An hour after higher oxygen levels were introduced, all the animals regained 60–100 percent of their vision. The findings are troubling because climate change is thinning the ocean’s oxygen. This predicts a blind and vulnerable future for such species. 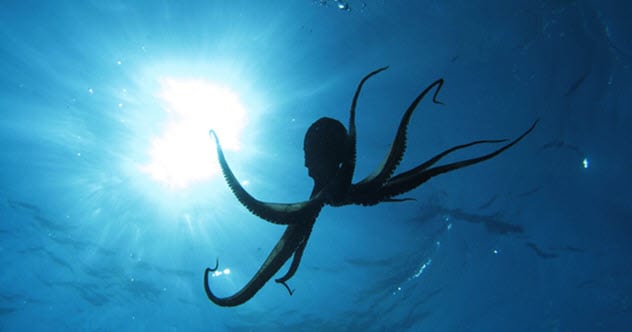 A growing number of people love octopus on their plates. Capturing the cephalopods in the wild remains an unpredictable effort, and fishermen struggle to meet the global demand. For this reason, seafood companies want to farm octopuses.

Scientists and psychologists insist that octopus farming is a seriously bad idea. Humanity has largely thrived thanks to livestock, but this is one animal that would cause more problems than it’s worth. The babies only eat live foods, and adults need a lot of meaty chow. This would add too much pressure on already-struggling fisheries to provide food.

Scientists estimate that feeding captive octopuses for human consumption would ironically affect our food security, too. Such farms would cause pollution and most likely inbreeding, be a vector for disease, and traumatize creatures that are intelligent enough to recognize individual people and solve complex problems.[2]

Octopuses are known for many remarkable skills, both physical and cognitive. But they have a dark side. Romantic males risk being strangled and eaten by the objects of their affection.

Depending on the species, the guys have evolved strategies to give them a fighting chance against females that are often bigger. To mate, a male must deliver sperm through a specialized mating arm (one of his eight arms).

Algae octopuses have to deal with aggressive females and the larger males that guard them. The smaller males have a brilliant strategy. They pretend to be female, hiding their exceptionally long mating arm while cuddling up to the real female.

Other species take it to the extreme. The argonaut and blanket octopuses quickly amputate their mating arms inside the females and then run for their lives.[3]

7 They Walk On Land

It is not unheard-of for an octopus to scuttle over land. Indeed, they have been filmed moving between landlocked pools. However, as octopuses are nocturnal, their land loping is rarely witnessed.

In 2017, an event took place that did not appear natural. Dolphin watchers in Wales returned to the beach at Ceredigion around 10:00 PM. They encountered over 20 octopuses strolling around in the sand.

There was something off about the whole thing. It is one thing for them to occasionally slip between pools, but for a large group to emerge on a beach was just dangerous behavior. Octopuses can survive on land but only for a few minutes.

The Ceredigion cephalopods did not go to pools or back into the sea. Indeed, the next day, a couple of them were found dead. Most had been rescued the previous night when they were found. Why this stranding happened remains unknown, but the likeliest scenarios include illness or something that disoriented them, like a storm.[4] 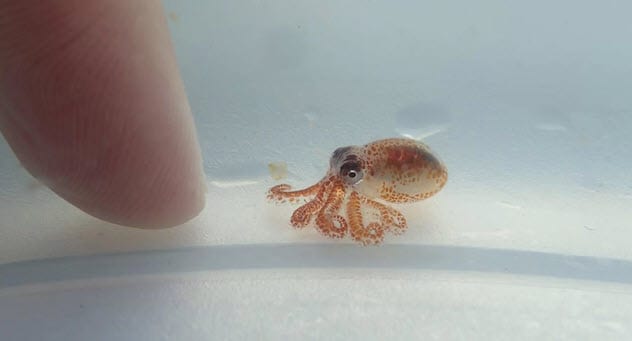 In 2018, researchers from Hawaii’s Kaloko-Honokoohau National Historical Park decided to monitor nearby coral reefs. When they noticed a floating piece of plastic, they scooped up the trash only to discover that it had passengers. A pair of baby octopuses had somehow made it onto the plastic, and they were incredibly tiny.

One was adorable. It was the size of a pea and posed for photos near one of the researcher’s fingertips. After the pictures were shared on social media, the baby’s freckled arms and large eyes soon earned it many fans online.

The second was also tiny. But it probably did not make the social scene because it was being the opposite of adorable. When the park scientists found it, the minuscule baby was throttling an equally small baby crab to death. The cute and the cutthroat cephalopods were both released in an area described by officials as a “small protected space.”[5]

In 2018, two friends decided to take a kayak trip off the coast of New Zealand. One man filmed the other, which turned out to be a good thing. In a bizarre moment, a seal popped up next to the friend in the video and flung a sizable octopus at him. With uncanny accuracy, the cephalopod hit him straight in the face.

Why the octopus-battered man seemed to enjoy the experience might remain a mystery forevermore. (He yelled triumphantly.) But the reason for the seal’s behavior could be as simple as tenderizing a tough meal.

Octopuses are tough prey in the sense that they fight back and their suckers still cling to any surface after death. Not a good thing if those suckers must go down a seal’s throat.

However, roughing up a dead octopus damages the suckers enough to lose their grip. This usually happens in the form of smashing the prey against rocks or tossing them into the air. The seal probably considered the floating human as good a tenderizing surface as any other.[6] 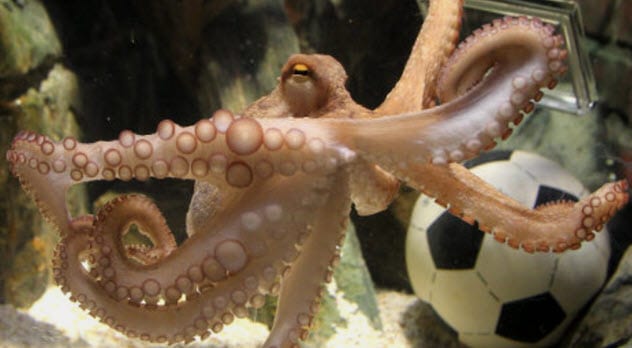 During the 2010 World Cup, Paul the octopus became famous for predicting the winner of every match. When he died in October of that year, a filmmaker accused Paul’s keepers of a cover-up. Not that Paul was still alive, but that the psychic cephalopod had actually died three months earlier right before the final match.

Apparently, the German aquarium replaced him with a dead ringer to fool everybody. The filmmaker, Jiang Xiao, was the director of Who Killed Paul the Octopus? Probably not the title that the Oberhausen Sea Life Center (Paul’s home) saw coming when they agreed to work with Jiang.

As a believer that all octopuses look identical, Jiang said she thought the aquarium staff became “nervous” and “afraid” because the film probed the real story behind the miraculous octopus. This assessment baffled the aquarium as much as the claim that Paul had died months earlier.

Jiang declined to explain why she believed the creature was “killed.” Oberhausen Sea Life Center said that there was no squishy impostor. Paul had died of old age at around 2.5 years old, which is normal for octopuses. Then he was cremated. Visitors can view his urn and video clips and write in a condolence book.[7] 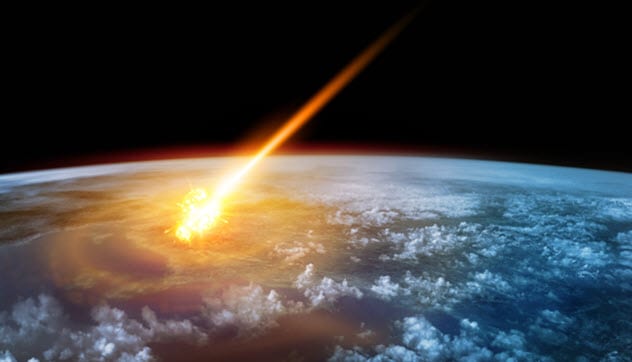 In 2018, a study was released with decades of research behind it. Compiled by 33 authors, the work was peer-reviewed, well-cited, and published by Progress in Biophysics and Molecular Biology.

It claimed that octopuses were from outer space. The authors did not suggest that the cephalopods had arrived in spaceships, but the researchers came close.

They pulled out all the stops to support the possibility that squids and octopuses had laid eggs somewhere in yonder space. Somehow, those eggs had ended up in comets, where the icy conditions put them into cryopreservation.

The theory then goes that the comets crashed into Earth hundreds of millions of years ago. The eggs survived and somehow hatched. Presto! The planet had smart cephalopods.[8]

Although scholars are becoming more open to the idea that some of Earth’s life, elements, and chemicals were seeded by extraterrestrial objects, it will require more research and indisputable evidence before this report can be rescued from the lunatic fringe.

When a New Zealand fisherman raised his crayfish trap, he found that it contained an octopus. The scarred creature was about the size of a rugby ball and had shortened limbs. When the fisherman took the animal to the national aquarium, staff could see that the octopus had been in fights with fish, probably on the reef where he lived.

They called him Inky and gave him a tank. Inky’s charismatic personality soon made him a hit with the public. He was known for his exceptional intelligence, but it wasn’t until years later that it became clear how clever the guy was.

In 2016, the top of Inky’s aquarium was accidentally left open. That night, when the building was empty, the cephalopod crept through the tiny opening. He slid down the side and to the floor.

After undulating over an area spanning up to 4 meters (13 ft), the octopus reached a drainpipe. The 50-meter-long (164 ft) tube took Inky straight back to the ocean. Although nobody saw it happen, this was the likeliest scenario. Security was too tight for anyone to have stolen him. Octopuses are famous escape artists and, lacking bones, can squeeze through impossibly tight spaces.[9]

Octopus sleeping, but is she dreaming?

Sometimes, octopuses do really strange things. In 2017, something was caught on camera that could beat the best of them. In Colorado, the Butterfly Pavilion is a zoo for invertebrates. One resident was a Caribbean two-spot octopus. Similar to other octopuses, it was capable of shifting colors.

Channeling their inner chameleons, these eight-armed wonders turn invisible to gain an advantage with predators and prey and to communicate with each other. In October, a zoo worker filmed the two-spot changing colors in a dramatic fashion.

At first, it was white. Then dark patterns began to pulse in sync with the animal’s breathing. Finally, a rush of near-black flooded its skin before fading to white again.

What made it so intriguing was that the animal was asleep. As octopuses deploy quick changes to deal with sudden alterations in their environment, it was possible that the two-spot was having a nightmare.

Scientists are seriously studying how cephalopods sleep and whether they dream. If they do, the process might be completely novel because they do not have brains like humans. Instead, they have neuron clusters in their limbs.[10]