Think guns are the only way to hunt? Think again. Since ancient times humans, have devised bizarre methods to get their prey. Some are used on land, others on water. Some are used to get meat, others for pest eradication. 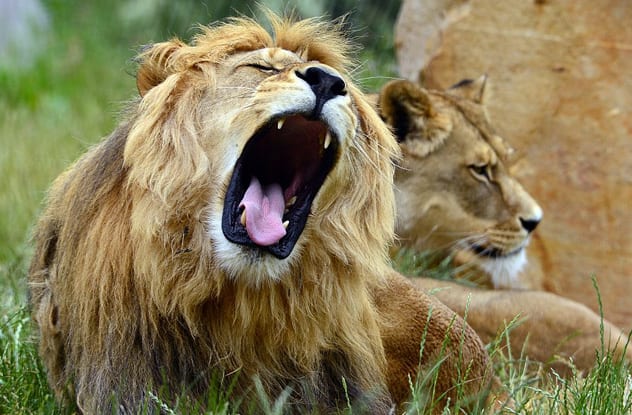 Stealing meat from lions seems like a poor choice. However, the Mbororo herdsmen of Cameroon have done it for centuries. They use flaming sticks to chase big cats from kills. The technique is common among large predators but otherwise little documented in man.

With lions growing increasingly wary of people, kleptoparistism has become easier for humans. Reports from Cameroon, Uganda, and Tanzania indicate the practice is on the upswing. This is bad news for big cats. They expend tremendous energy bringing down prey. If their sustenance is stolen, it can have a massive impact on survival rates. Some fear human kleptoparisitism might eradicate entire lion populations. 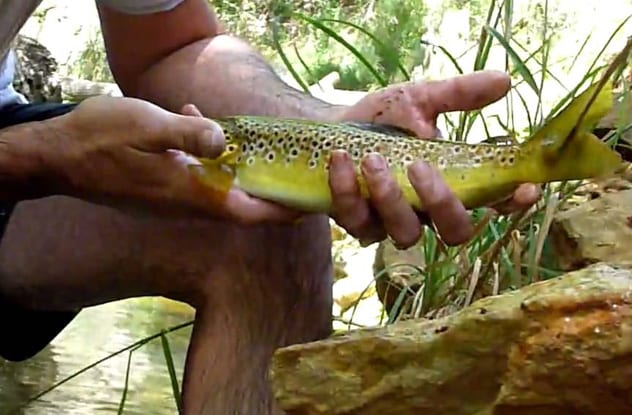 It might sound like a euphemism, but trout tickling is an ancient way to get a free dinner. This fishing technique requires no equipment, just stealth. You approach a likely trout hole from downstream. Lie stomach-down on the bank. Reach into the water. Once you feel a trout, tickle the belly as you move tail-to-head to lull the fish. When you reach the head, squeeze and yank the fish out of the water.

For centuries, this technique has been popular among Europe’s poor. They could not afford equipment or pay to fish private land. It is generally considered a form of poaching. Gypsy guitarist Django Reinhardt, the first notable European jazz musician, was known as an expert trout tickler. Perhaps the dexterity required to play stringed instruments translates to trout tickling. 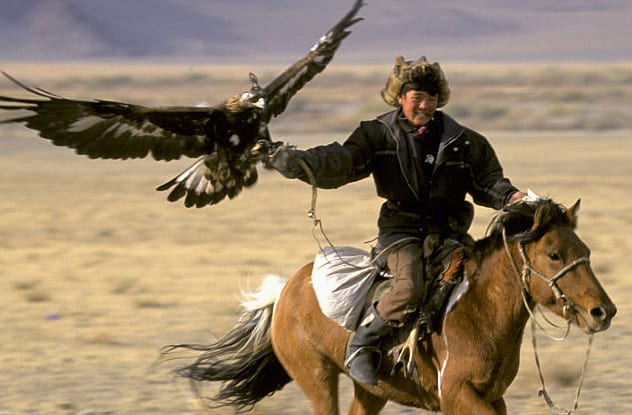 The Burkitshi are members of Mongolia’s ethnic Khazakh minority that use golden eagles to stalk prey. The hunters ride horseback with these enormous raptors perched on their arms as they scour the High Altai Mountains in search of foxes.

The bond between hunter and bird goes deep. The hunters capture eagles live. Four-year-old birds are ideal. At this age, they have developed hunting skills yet are still malleable enough to be trained. Only females are used. Their wingspan is larger and they are more ferocious than males. The eagles are domesticated, fed by hand, and even sleep with their captors. The golden eagles can live up to 30 years, but the hunters release them after 10. The birds die wild.

Golden eagle hunting will soon be extinct. The Bukitshi are disappearing. There are believed to only be 50 or 60 left practicing this ancient nomadic lifestyle. 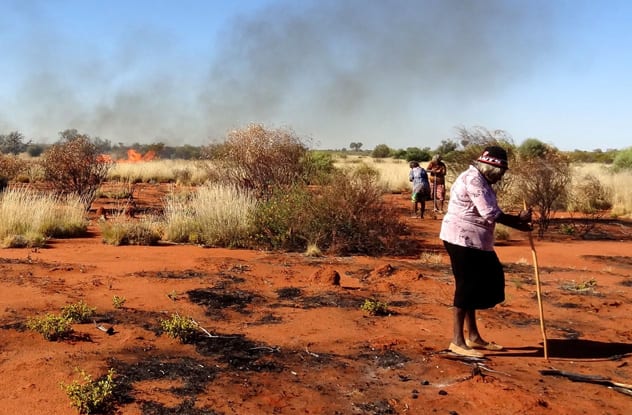 The Martu people of Australia’s Western Desert are known for using fire to hunt lizards. The result has actually benefited the wildlife of the Outback. The technique creates a small patchwork of cleared land—perfect habitat for bush critters.

Goanna are the Martu’s most valuable resource. These burrowing lizards make up 40 percent of their caloric intake. The Martu technique of goanna hunting is thousands of years old. In winter, the lizards hibernate. Women cover burrow entrances and set the surrounding grass ablaze. Without this technique, the brush becomes overgrown. Unchecked growth is perfect fodder for lightning fires, which can be devastating to mammalian habitat. The practice is such an integral part of Martu culture that their language has a word for every stage of the post fire vegetation growth. 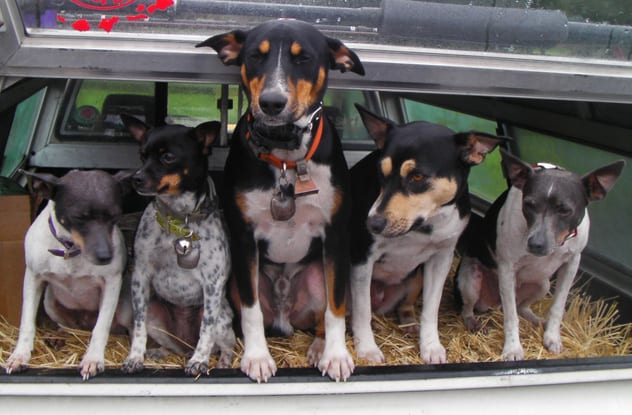 Rat hunting involves an incredible amount of coordination for such a small quarry. Reports from mid-19th-century London describe using terriers and ferrets in tandem to curb the city’s monstrous infestation. The ferrets chased the rats out of their holes, and the dogs dealt the deathblow. Many canine breeds we now consider lapdogs were specifically developed to hunt vermin.

New York has turned to traditional methods to help curb its abundance of rats. Specially trained Jack Russells, fox terriers, and dachshunds and their owners prowl the shadows in search of vermin. This is hunting for extermination. One camp views this as a time-honored tradition. Animal rights activists view it as cruelty. It’s hard to say this is less humane than poisoning, which leaves rats fatally ill for hours. What’s more, these poisoned rats pass toxins on to anything that eats them. 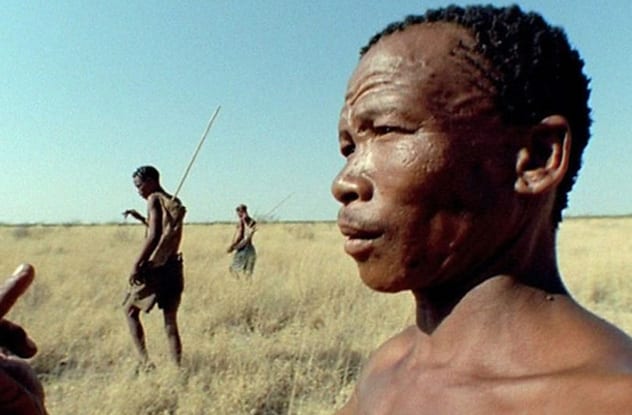 Most experts believe we fed our rapidly developing brains first as scavengers and then as endurance runners. Our upright posture and naked skin with sweat glands are designed for rapid cooling. Our large butt muscles and elastic tendons allow us to run much more efficiently than other animals. Humans are ungainly creatures, but there is no animal in the world that can match our stamina.

Persistence hunting is still practiced by the Kalahari Bushmen of Botswana and the Raramuri people of northern Mexico. Modern fitness enthusiasts have also started to dabble with this ancient technique. Many of these fit folk are vegetarians. They are more interested in the theoretical applications than a means of sustenance. 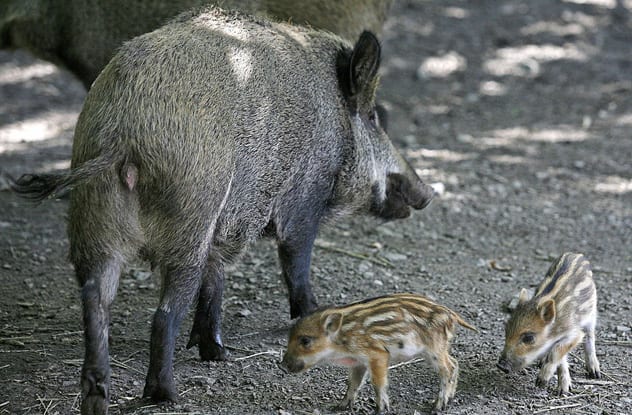 Hawaii is a paradise in jeopardy. Invasive species threaten to destroy the island’s fragile ecosystem, and there is no more destructive species than wild boar. There is only one solace: They are delicious.

People in Hawaii hunt these surly beasts with knives. The technique involves stalking the hogs, chasing them down with dogs, and then pouncing for the fatal stab. Knives are considered both more traditional and safer than bullets on a crowded island.

Wild boar are not just a problem in Hawaii. They either are, or soon will be, a major environmental disaster in every state in the lower 48. Some folks have resort to using explosives. This is not hunting. It is extermination—explosives destroy the meat.

Octopus are incredibly smart and incredibly delicious. They have the most complex brain of any invertebrate but are traditionally caught using a simple technique. The standard way of fishing for octopus is using pots. The vessels are lowered to the sea floor and anchored. The octopus crawls into the pot, thinking it has found a new home. The fisherman drags up the pot with the octopus, which rarely try to escape. The technique does not even require bait. It is almost too simple.

Potting octopus has changed little over millennia. The vessels were traditionally made of terracotta. Now, most are plastic. The technique is almost universal around the globe. Ancient Greeks used octopus pots, and so do modern fisherman from Spain to Japan. 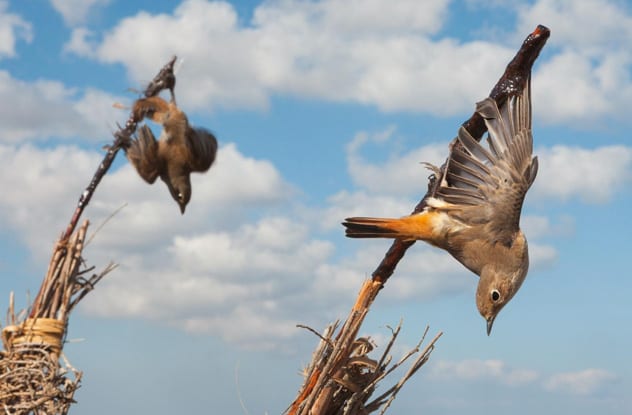 Poachers in Cyprus are decimating the songbird population. Their hunting technique is simple and ancient. They use lime sticks covered in ultra-sticky gum derived from Syrian plums. The sticks are placed in the inviting lower branches of juniper trees. Foraging birds become ensnared.

The quarry of the traditional Cypriot bird hunters is blackcaps, a common European wren considered an island delicacy. The problem with the gum-stick technique is that there is tremendous by-catch of endangered species—like the spotted flycatcher. There are many organizations and volunteers working to stop the songbird slaughter. The challenge is daunting. Bird hunting is an ancient part of Cypriot culture and there is no shortage of poachers. The lime sticks do tremendous damage to the birds. They are often fatally wounded in the rescue process. 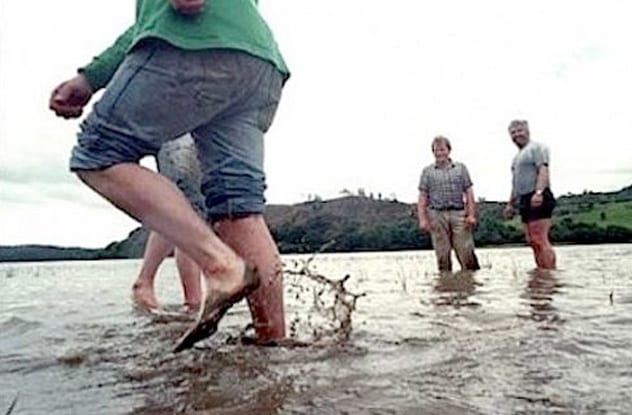 Flounders are a flat fish known for their white flakey flesh. Their low profile and penchant for crabs often means they are found in the shallows around estuaries. Ingenious hunters have found out how to harvest this delicious fish with a diabolically simple technique: They step on them.

Flounder tramping is a traditional fishing technique used in southwestern Scotland for centuries. The process is simple. You walk along the mud flats until you step on a flounder. At this point, a fight against instinct occurs. Every impulse tells you to remove your foot from the fish. However, you must stand firm, or the quarry will escape. Some trampers also employ a stick, which they use behind their shuffling feet.

On the first Saturday of August, the small town of Palnackie, Scotland, hosts the World Flounder Tramping Competition. The fun is broadcast throughout the UK and Australia. 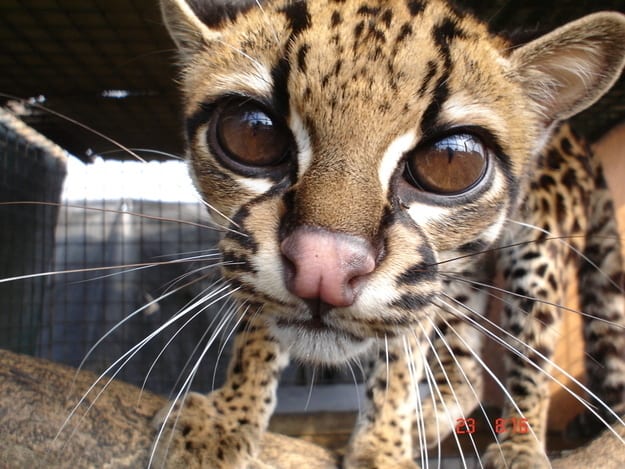 Read on for more from the animal kingdom!

10 Extraordinary Acts Of Compassion In Wartime