For most people, their religion is meant to be something that uplifts them and gets them through trying times. Sadly, there are others who become obsessed with what they believe in and refuse to see anyone else’s point of view. They will stop at nothing to prove that theirs is the only religion to follow. On June 12, 2016, Omar Mateen, age 29, opened fire at Pulse, an Orlando gay club, killing 49 patrons. Mateen had pledged allegiance to ISIS and prayed at a mosque at least four times per week. The motive for the attack is firmly believed to have been Mateen’s hatred of homosexuals, as evidenced by his father’s statement after the massacre that God Himself would punish gays for their lifestyle.

However, as friends and family were interviewed after Mateen was shot dead by police, it became apparent that he himself may have been attracted to men but was ashamed to admit it because of his beliefs. Many patrons recognized Mateen from several visits he made to the club, and some have confirmed that he even chatted with them via online platforms and was not uncomfortable in the presence of gay men.

9 The Murder Of Asad Shah Devout Ahmadi Muslim Asad Shah was murdered on March 24, 2016. Tanveer Ahmed (pictured above), also a Muslim, stabbed him to death for “disrespecting Islam.” Apparently, Shah had posted videos online in which he claimed to be a prophet.

After the murder, Ahmed walked to a bus shelter and seemed to be praying after he sat down. When he was apprehended by the police, he stated that if he hadn’t killed Shah, someone else would have, and the violence in the world would have increased. Later, Shah’s family left their home in Scotland after Ahmed’s confession, stating that the pain and suffering they felt after the shopkeeper had been murdered would prevent them for ever living a normal life there again. 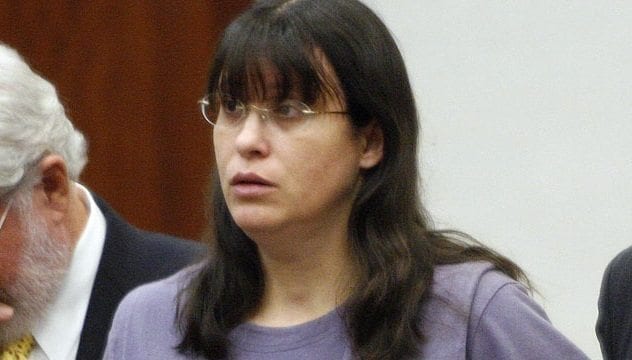 Andrea Yates, suffering from an extreme case of religious fanaticism exacerbated by mental illness and depression, drowned all five of her children in a bathtub in 2001. The 37-year-old from Texas later told a neurologist that after the birth of her first boy in 1994, she became aware of the presence of the Devil in her home and had seen images of a person being stabbed.

By 1999, she had five children and was in a distressed state. After attempting suicide, she was admitted to a psychiatric institution several times. A month after her last stay, she murdered her children by holding them under the water in their bathtub until they drowned. Andrea claimed that the children would be banished to Hell unless she murdered them and referred to them as the Antichrist and “marks of the beast.”

In 2002, Andrea Yates was sentenced to life in prison after a call for the death penalty was rejected by the court. 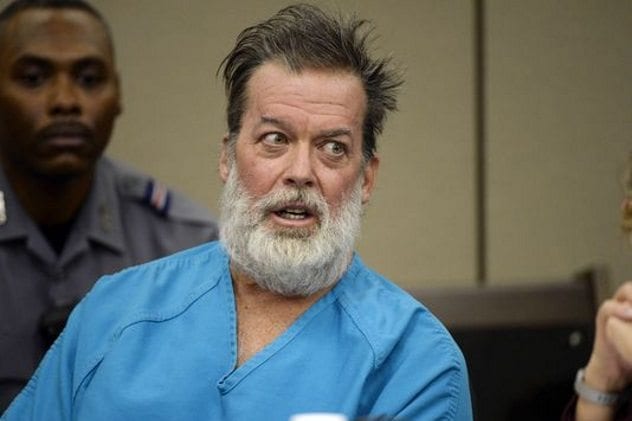 When Robert Lewis Dear was arrested for killing three people at a Planned Parenthood center in Colorado in 2016, he told detectives that aborted fetuses would one day meet him in Heaven and thank him for what he had done. He also believed that Barack Obama was the Antichrist and that Robin Williams killed himself because he made a joke about Obama.

During court proceedings, Dear referred to himself as a warrior fighting for the babies and also told investigators that he thought highly of another man who had murdered a Florida abortion provider. Investigations into his past revealed that he ranted about religion on social media and had lived without water and electricity on multiple occasions. Dear is currently in a mental hospital after having been found to be delusional. In May 2014, members of a cult called Church of the Almighty God attempted to recruit new members in a McDonalds in the town of Zhaoyuan by getting their phone numbers so they could call and try to convert them. Wu Shuoyan, age 35, refused to give out her number to strangers, angering the cult. After refusing for a second time, a member named Zhang Fan threw a chair at Wu, and she and her father, Zhang Lidong, proceeded to beat her with mops. Lidong stomped on her head and face. Wu died at the scene.

Lidong claimed that he and the other members believed Wu was a demon or was possessed by an evil spirit and had to be destroyed. (The main belief of their cult is that God has already returned to Earth in the form of a Chinese woman who is about to kick-start the apocalypse.) Lidong and his daughter were executed in 2015. 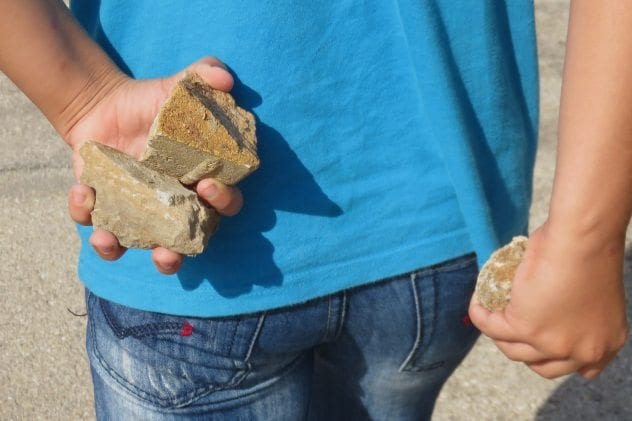 An 11-year-old Brazilian girl named Kailane had been initiated in Candomble for four months. The Afro-Brazilian religion has a devoted and long-running following in Brazil. Kailane was on her way to a ceremony in Vila da Penha in 2015 when a group of Evangelical Christians threw stones at her, hitting her in the head, while shouting that she would be going to Hell and that the Devil must get out of her. Kailane was rushed to a hospital after she fainted. She fortunately made a full recovery, but she’s now afraid to reveal her faith.

A 90-year-old priestess of Candomble had to endure severe verbal insults and persecution by Evangelicals for at least a year, causing her so much distress that she suffered a heart attack and passed away. The night before she died, a group of Evangelicals held a vigil and shouted insults at her and her faith. Investigations into complaints against the Evangelicals are ongoing. Photo via The Oklahoman

In 2014, 21-year-old Isaiah Zoar Marin and his brother Samuel were playing a card game with 19-year-old Jacob Andrew Crockett. Samuel later stated to police that Isaiah picked up a black sword that was in the room and started swinging it around. A few seconds later, he heard someone getting stabbed, and when he looked up from the cards, he saw blood flowing freely from Jacob’s chest. Isaiah had stabbed him and had nearly decapitated him.

Samuel stated that he ran away from the crime scene, and Isaiah followed him, trying to explain why he had done what he had done. Isaiah called 911 and confessed to the crime, incoherently speaking about sacrifices and magic. Samuel later told police that Isaiah had strong Christian values and that Jacob practiced witchcraft. Isaiah received a life sentence for the crime.

3 The Murder Of Beryl Gilchrist 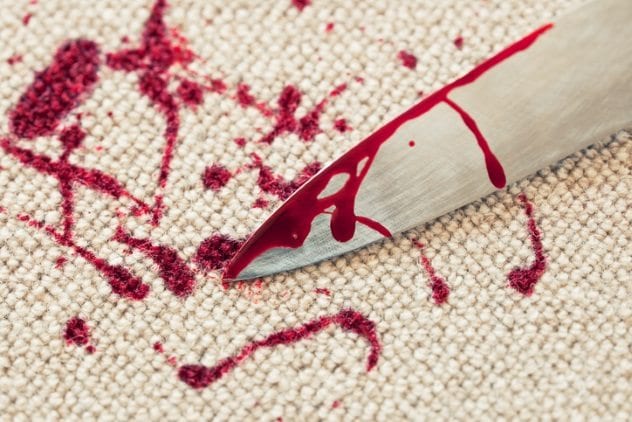 Religious zealot Jermaine Gilchrist was watching a TV preacher at his mother’s home in London’s Broad Green neighborhood when he became extremely upset with her commenting on what he was watching. He became so upset that he stabbed his mother to death, wrapped her body in a duvet, and left a Bible next to it.

Beryl Gilchrist herself was also involved with a religious sect and had become increasingly withdrawn from her children and family. Jermaine told police that he decided to kill his mother because she only did evil things. He went further to say that she tried to escape, but he dragged her back into the living room, where he killed her. That same day, he also sold his mother’s cell phone at a local store. Jermaine was sentenced to life in prison for his crime.

2 Death At A Foundry 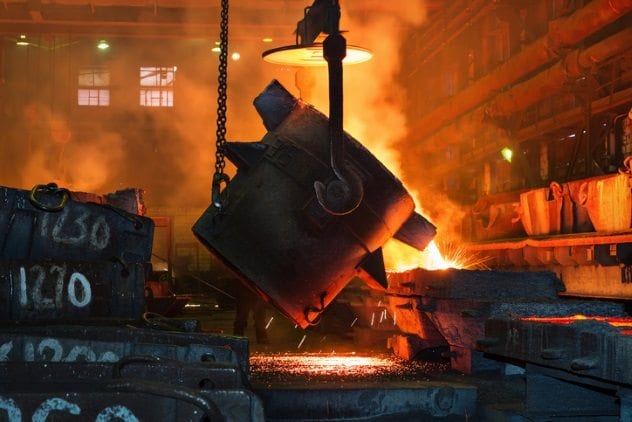 Bart Dobben was a schizophrenic and a fanatic about religion and the end of the world. When he was released from a mental institution, he started working at a foundry in Muskegon, Michigan. Dobben refused to celebrate holidays, but on Thanksgiving 1987, he seemed to have a change of heart. He invited his estranged spouse to have dinner with him, along with their two toddlers and his parents. On the way to his parent’s house, he stopped at the foundry to show his boys where he worked and to pick up a Bible he had left there.

While his wife waited in the car, he put his two-year-old and 15-month-old boys into a massive ladle that was used to hold molten metal. He then turned the heat up to 700 degrees Celsius (1,300 °F), burning them to death.

Before this horrific crime, Dobben once anointed his firstborn with olive oil and started covering the boy’s baby pictures with his own diapers. He’d also joined a sect eight months before killing his children. A year after the murders, Dobben’s wife gave birth to their third son and claimed to have forgiven her husband for what he had done.

1 The Murder Of Faith Lovemore In 2009, mental health workers visited the home of Julia and David Lovemore. They found David in a distressed and “psychotic” state, praying and shouting. For some reason, the workers left to find help without checking whether Julia and the couple’s two children were safe.

Unbeknownst to the workers, Julia Lovemore had killed her six-week-old daugher, Faith, by stuffing pages of the Bible into her mouth and sitting on her, smothering the baby to death. When the workers returned, they found the baby’s lifeless body. Both Julia and David were extremely fundamentalist Christians, which fueled their mental health issues. Julia was detained under the Mental Health Act. David was found not guilty of being an accomplice to murder.