There’s no shortage of ugliness and woe in the world. Every day, stories of human hardship saturate the news and batter our brains with abandon. But if you dig deeply enough, beyond the gloom you’ll also find everyday people who remind us of the tremendous good in the world. 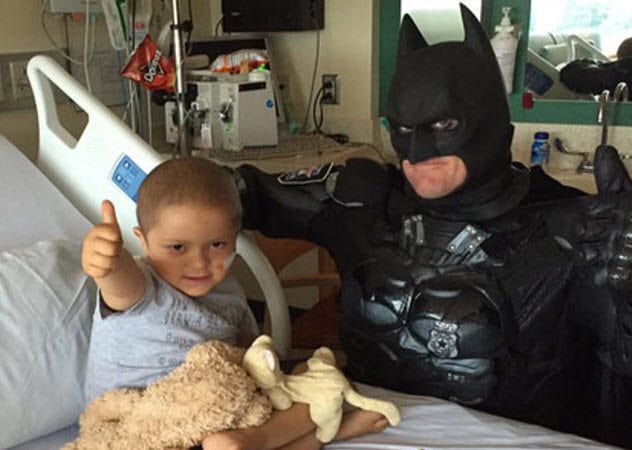 Officer Damon Cole is a real-life supercop but not for the reasons one might expect. When he isn’t off busting bad guys, Cole is traveling hundreds of miles to greet seriously ill children while dressed as their favorite superheroes. He has driven to 11 states, posing as Superman, Batman, and the Incredible Hulk among others.

Cole’s caped crusade, while heartwarming, is also heartbreaking. He once made an 11-hour drive to see a terminally ill child. He’s driven five hours to make a midnight appearance for a boy approaching death.

Cole has also attended funerals in costume. One especially agonizing case involved a five-year-old named Joshua who drowned in a pool. Cole, who was on duty, had to recover the body. To honor Joshua, Cole attended his funeral dressed as Spider-Man and purchased a matching outfit for Joshua to be buried in. 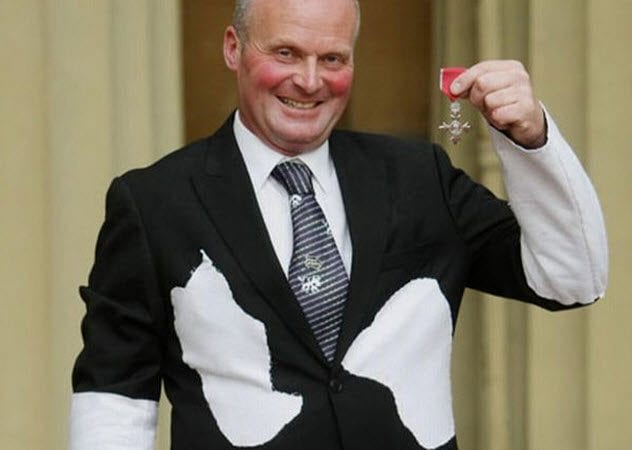 Tony Fowler has braved flood waters to rescue a cat in peril. He has hijacked the getaway car of thieves to prevent their escape and participated in a drug bust. He’s also saved an Alzheimer’s patient from a burning house.

Fowler’s laundry list of good deeds sounds like the resume of a budding superhero. But in reality, he’s just an incredibly helpful milkman. In Fowler’s own words, “I’ve done everything from helping to save people’s lives to getting the lid off a jar of pickles for one of my older customers.” His track record of good deeds spans two decades.

In 2010, the milkman’s tireless service earned him a prestigious UK award bestowed by Queen Elizabeth II herself. To accept the honor, Fowler dressed like a Friesian cow. Fittingly enough, he’d previously worn the outfit to raise money for charity. 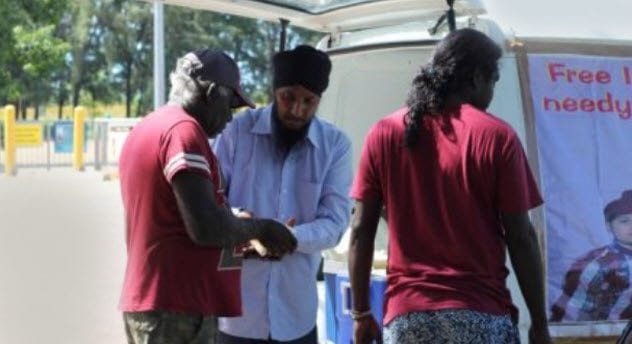 During the day, Tejinder Singh repairs air conditioners. At night, he works as a cabdriver. And one Sunday a month, going on no sleep, he spends hours feeding the hungry and homeless of Darwin, Australia.

The cabdriver’s charitable exploits were inspired by prejudice. Singh, a Sikh who hails from India’s Punjab region, was ferrying a man through Darwin when he was asked what school his kids attended. Singh answered. The passenger then replied that he’d shield his own kids from a terrorist bombing by having them attend school with Singh’s children.

Dismayed, Singh wanted to do something that would bring people of all stripes together. So he and his family began saving $1 each day. That money went toward the more than 27 kilograms (60 lb) of food Singh would cook on the last Sunday of every month and distribute around the city to anyone who needed it. 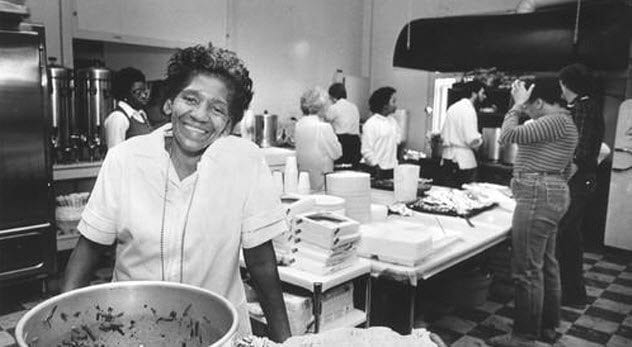 For years, Bea Gaddy vacillated between low-paying jobs and homelessness, digging through trash cans for nuggets of sustenance when she couldn’t afford food. Then one day in 1981, her luck changed. She purchased a 50-cent lottery ticket and won $290. What Gaddy did next would define the rest of her life.

Gaddy used her lottery winnings to feed 39 hungry Baltimoreans on Thanksgiving. From then on, Gaddy, aided by a bevy of civic-minded volunteers, would feed Baltimore’s poor on Thanksgiving in what would be known as the “Thanks for Giving” feast.

As time passed, the number of people touched by Gaddy’s kindness skyrocketed. By 1991, 10 years after the first “Thanks for Giving” event, she would help prepare 17,000 meals, all funded through the generosity of donations. Gaddy, who would be dubbed Baltimore’s Mother Teresa, kept up the tradition until her death from breast cancer in 2001. 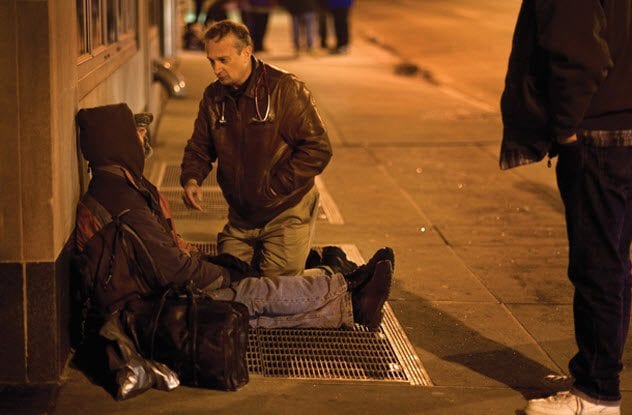 Not many doctors can say they’ve had a prospective patient pull a shotgun on them, but Jim Withers can. A practitioner of street medicine, Dr. Withers treats people from the lowest echelons of society.

Inspired by his mother, who served the needy through Meals on Wheels, and his father, a doctor who made house calls, Dr. Withers began tending to the homeless in 1992. Aided by a homeless man named Sallows, the physician would venture into the grimmest and grimiest parts of Pittsburgh with dirt-caked hair and clothing to search for the sick. At first, he encountered suspicion and aggression, but with time, patients warmed to him.

Dr. Withers’s campaign grew into Operation Safety Net, which boasts a cadre of physicians, nurses, social workers, and volunteers. Since its inception, the organization has treated an estimated 10,000 homeless people and helped 1,200 of them find housing. 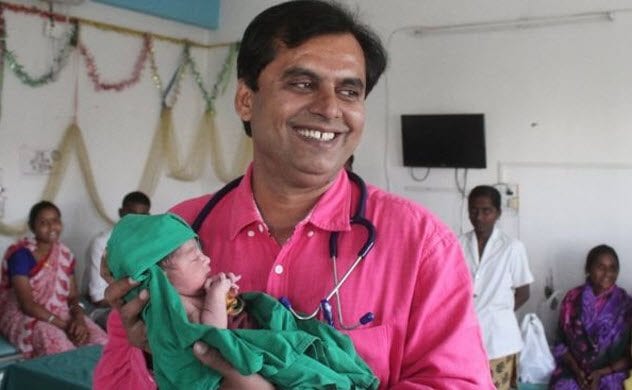 In his youth, Ganesh Rakh wanted to be a wrestler. Instead, he became a doctor who combats prejudice. In India, a country racked with rampant gender discrimination, female infanticide is startlingly common. Dr. Rakh has set out to change that.

In 2012, Dr. Rakh began the Mulgi Vachva Abhiyan (“campaign to save the girl child“). At his hospital, girls are delivered free of charge. And unlike at other hospitals, where only boy births are celebrated, his staff ushers in the arrival of girls with flowers, candles, and cake. Outside the delivery room, Dr. Rakh has also organized equality marches aimed at placing girls and boys on equal pedestals.

The physician’s efforts haven’t gone unnoticed. Government officials and a Bollywood star have lauded Dr. Rakh’s work. But for him, true success lies in showing India that girls are too priceless to be born for free. 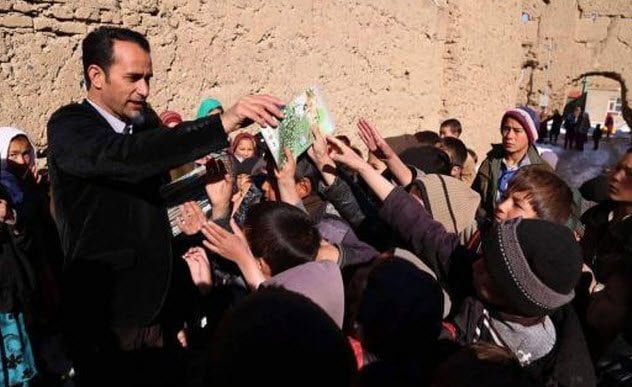 Afghan schoolteacher Saber Hosseini receives death threats from the Taliban for helping disadvantaged families. It started in 2015 when the schoolteacher was looking for a way to increase literacy among children in the distant and difficult-to-access parts of Afghanistan. Friends in literary circles helped him amass 200 books.

Transporting hundreds of books, however, wasn’t easy. He had to contend with a lack of funds and difficult terrain. So he set out alone on a bicycle. His mode of transportation also sent a message. Taliban bombers had used bikes in their attacks. Hosseini wanted to reclaim bikes in the name of something positive.

People took notice of Hosseini’s efforts and joined him. Now his initiative, known as the Kids Foundation, boasts a fleet of 20 volunteers and 6,000 books that are transported by bike to hundreds of children and parents across Afghanistan. 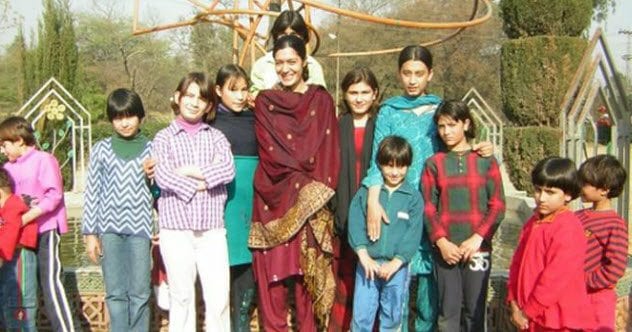 Andeisha Farid grew up as “one of the luckiest children among all the thousands of children living in a terrible situation.” An Afghan refugee from the day she was born, she spent the earliest years of her life in Iranian refugee camps after a Soviet air strike demolished her family home. Subsisting without clean drinking water, medical care, or schooling, she saw children around her die in droves.

When Farid turned six, her parents sent her to Pakistan where she was able to attend school. She would pay it forward 18 years later. In 2007, Farid returned to her native land to establish the Afghan Child Education and Care Organization (AFCECO). A network of orphanages, the AFCECO provides medical and educational assistance to almost 600 children.

Despite pushback from both Afghanistan’s government and its terrorists, Farid has also advocated for equal rights for girls. Her work has garnered international praise. 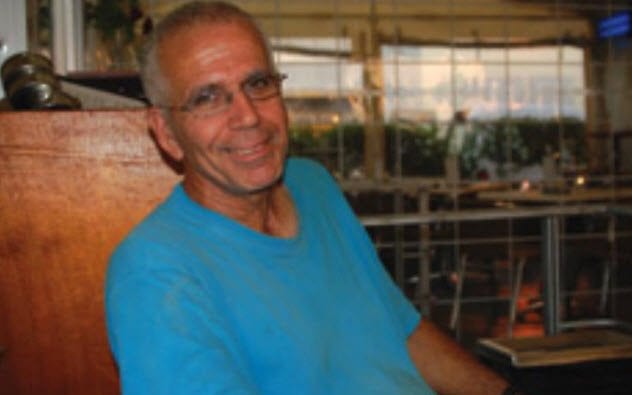 Israeli carpenter and professional juggler Yuval Roth knows loss like the backs of his skilled hands. In 1993, his brother Udi was abducted and slain by Hamas. The tragedy left a gaping hole in Roth’s heart that he needed to fill. But rather than wallow in bitterness, he joined a forum dedicated to ending the divide between Israelis and Palestinians.

As Roth got acquainted with Palestinian families, a harsh reality dawned on him. Prohibitively high hospital costs in Palestine and stringent restrictions on travel to Israel made it incredibly difficult for many Palestinians to obtain proper medical care. Roth responded by establishing Derech Hachlama (“On the Road to Recovery“).

Staffed by 200 volunteers and coordinated single-handedly by Roth, Derech Hachlama transports ailing Palestinians into Israel so they can receive proper care. In 2010 alone, his group covered an estimated 90,000 kilometers (55,000 mi) of ground to save Palestinian lives. 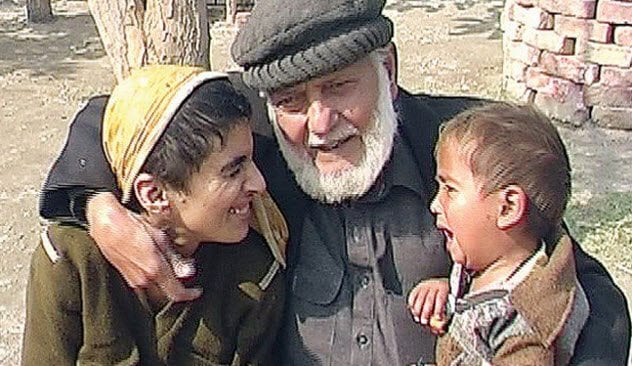 Anwar Khokhar cuts hair for a living. But despite being known as the Barber of Larkana, Khokhar is acclaimed for something far greater. For two decades, he’s been a shepherd to Pakistan’s missing and kidnapped children.

Khokhar had his first brushes with heroism in the late 1980s. Back then, he volunteered at a local shrine where he crossed paths with numerous lost children and runaways. At first, he would simply draw attention to them over a PA system. Eventually, Khokhar began carrying them to their parents. He temporarily brought some of them home to his wife and eight children.

As the volume of rescued children grew, Khokhar used ties with the prevailing political party to establish a shelter for them. He has done everything from placing ads in the paper to scouring his entire province to find their parents. According to the barber, he’s reunited approximately 10,000 families.