Kids’ movies are supposed to be straightforward, lighthearted fun with a moral lesson at the end. But as with most other movies, songs, and TV shows there will always be those who see something different. On this list are some of the most mind-blowing fan theories about kids’ movies to be found on the Internet.

10Donkey Is From Pleasure Island 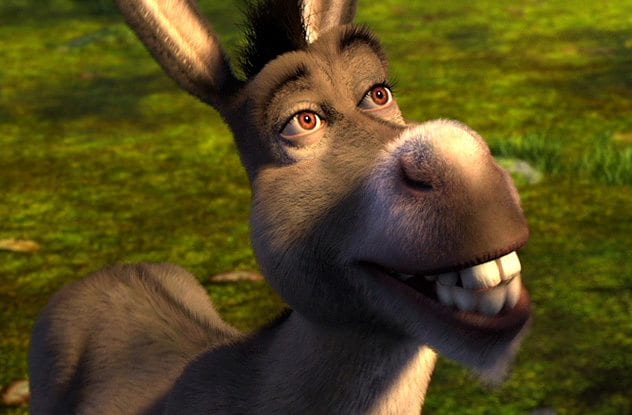 Shrek is everyone’s favorite ogre, but Donkey has his fair share of fans, too. When their adventure played out on the big screen in 2001, kids couldn’t get enough of this strange new animation, and adults snickered at the naughty humor.

15 years after the movie’s release, a theory about Donkey’s back story is making waves on the Internet. And it involves Pinocchio. In the 1940 film, ill-behaved boys are sent to Pleasure Island and turned into donkeys. Therefore, this theory has it that Donkey was once a boy who was sent off to this very island and turned into a donkey.

Furthermore, it is thought that since Pinocchio himself also features in Shrek, there is no reason a donkey from Pleasure Island wouldn’t make the cut. Donkey also stands out because he doesn’t seem to belong to a fairytale (in the Shrek storyline) whereas most of the other characters come from fairytales or nursery rhymes. 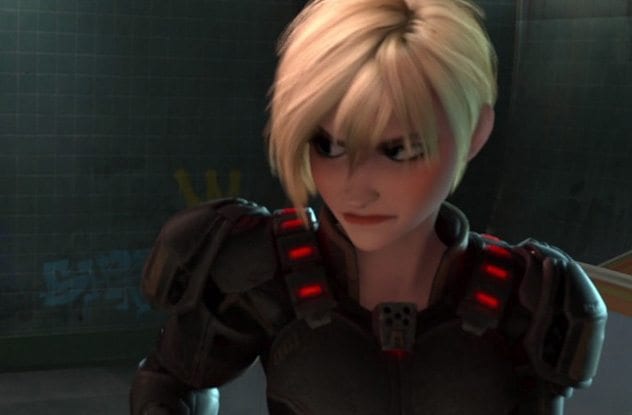 In the movie Wreck-It Ralph, everything is all fun and games until it is revealed that Calhoun, the main character in Hero’s Duty, has a dark backstory. She was engaged to be married, but her fiance was murdered and eaten on their wedding day by a cyborg bug.

Calhoun shoots the cy-bug in the movie, getting her revenge, but it didn’t end there. Fan theory has it because the cy-bug takes on the properties of whatever it eats, it took on the fiance’s characteristics as well. This means that when she shot the cy-bug in a fit of rage after it swallowed her fiance, Calhoun shot and killed her fiance herself.

8Riley Was Adopted And Missing An Emotion 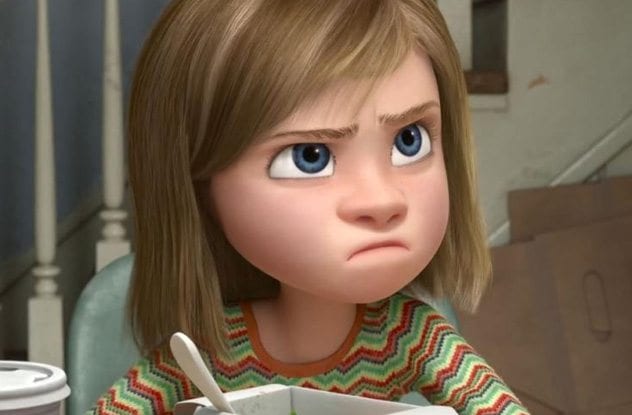 Inside Out was released in 2015 and was a major success for Pixar. For some fans, Bing Bong stole the show, while others made a point of coming up with the strangest fan theories possible.

Another theory to hit the Internet says Riley was adopted, as her mother was standing up in the beginning of the film while talking to newborn Riley, which is not likely if she had just given birth.

7Elsa And Rapunzel Are Sisters 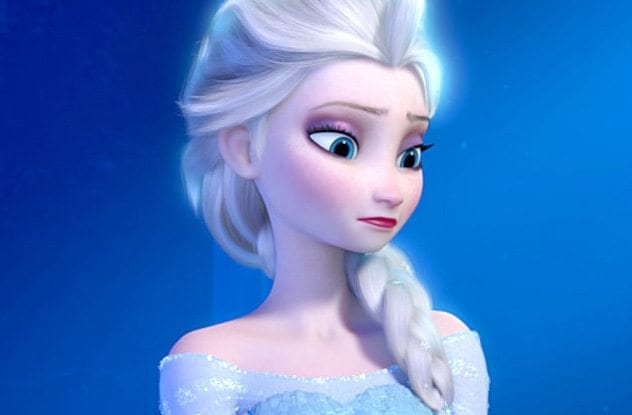 By now, many might have read about the theory that Ariel and Flounder from The Little Mermaid were swimming around Anna And Elsa’s parents’ ship in the beginning of the movie. Or the one (recently confirmed by the director of Frozen) that states their parents didn’t die in the storm, but ended up on a deserted island and then had another child who turned out to be Tarzan.

Another weird fan theory is now making the rounds, with people just waiting to see if this too will be confirmed. This theory claims that Elsa from Frozen and Rapunzel from Tangled are sisters. It is said that Elsa and Anna’s parents were on their way to Rapunzel and Flynn’s wedding when they perished at sea. Another angle on the theory claims that when Tangled was released in 2010, Rapunzel was 18 years old. Frozen was released in 2013, and since Elsa was 21, she would have been 18 at the same time as Rapunzel. This led to more speculation including that Elsa and Rapunzel might be twins because of their similar looks, and the fact that they’re both left-handed. 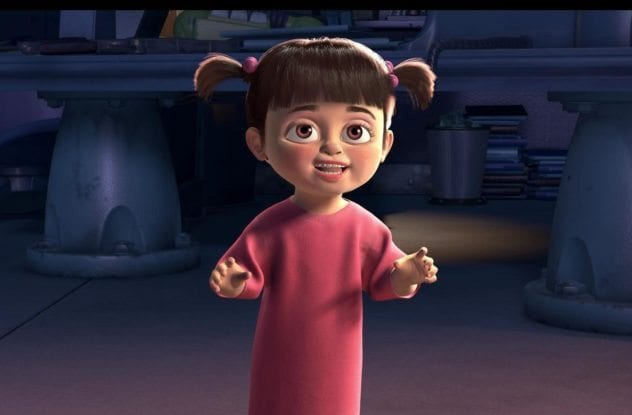 A long-winded theory has it that Boo from Monsters Inc grew up to become the witch from Brave. The first “evidence” of her magic powers is said to be when Sully closes the door on Boo. When he turns around, she is outside again.

It is also thought that Monsters Inc is set in the future, and Boo travels back in time to visit Merida where she lives in a lair, does carpentry, and alludes to her origin by having a carving of Sully in her shop. The carpentry corresponds with the wooden doors in Monsters Inc. It is also believed that Boo learned to time travel by using an overload of magic, which took her back to the time of the will o’ the wisps (the time period that Brave is set in). 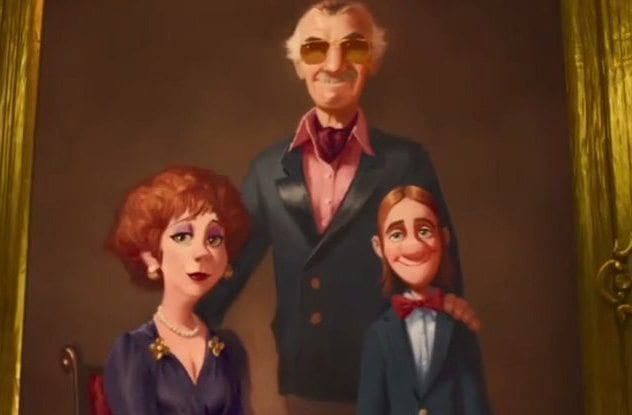 As soon as the Lilo & Stitch Easter egg was spotted in Big Hero 6, several fan theories about the movie’s connection to other animated films started piling up on the Internet.

One of the theories is that Aunt Cass may well be descended from Princess Anna (Frozen) considering that they both eat when they’re stressed or excited and they both push their hair behind their ears, among other mannerisms.

Another theory states that Fred’s father, Stan Lee, resembles Prince Hans from Frozen. There is also a stature resembling Hans in the garden. Finally, bringing Tangled and Big Hero 6 together is the theory that Honey Lemon is a descendant of Rapunzel because of their similar sad and happy expressions, not to mention the blond hair.

4Pinocchio, Peter Pan And The Princess And The Frog Are Linked 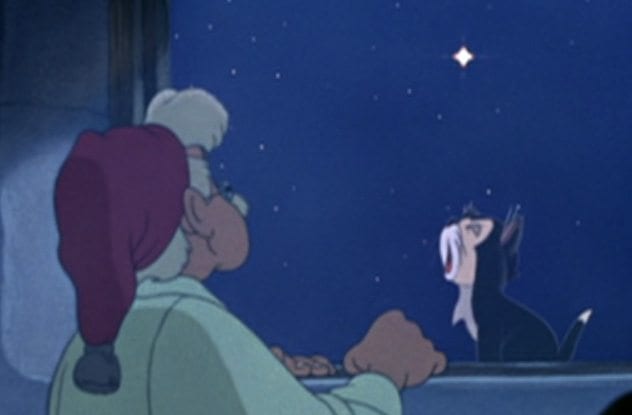 In Peter Pan, those who want to go to Neverland fly toward the second star to the right and then straight onward. Then in Pinocchio, Gepetto wishes upon a star, only for the star to turn into the Blue Fairy. Lastly, when Ray dies in The Princess and the Frog, he becomes a star way up in the sky, joining his better half, Evangeline

A fan theory has combined all of these by suggesting that Evangeline is the real name of the Blue Fairy. The Blue Fairy also goes by Wishing Star or North Star and she is the one who created Neverland after granting Peter Pan’s wish. This ultimately means that the second star to the right is a magic portal that is powered by Evangeline. Also, after Ray was buried, he became the star that shone next to the North Star in the sky, so his wish to be reunited with Evangeline was granted.

3Ice Age Is Set In The Future 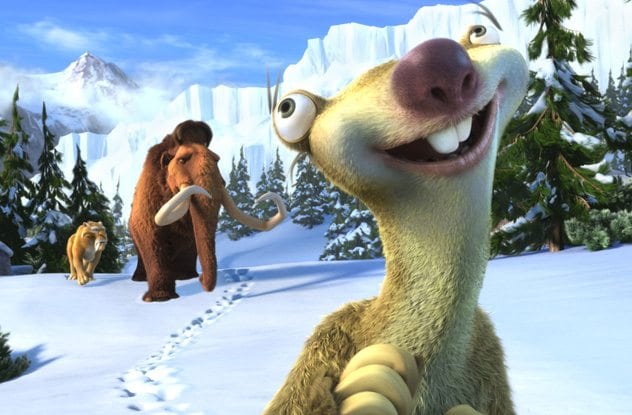 A couple of months ago, a compelling fan theory reared its head on Reddit regarding the setting of the Ice Age movies.

This theory has it that Ice Age happens in the future after humans have resurrected dinosaurs using discovered DNA. Humans have also started building spaceships, but a nuclear war breaks out leaving only a few humans, reduced to live like Neanderthals. The ice age is brought on by a nuclear winter.

Evidence given to support this theory includes the fact that humans are only seen in the first film, human history does not correspond to the events shown in the film, and the plant that tries to devour Manny and Diego could be some kind of warfare mutant experiment. Also, the Scrat we know and love is not the same Scrat throughout the movie series. He may well have been cloned by scientists for recreation purposes. 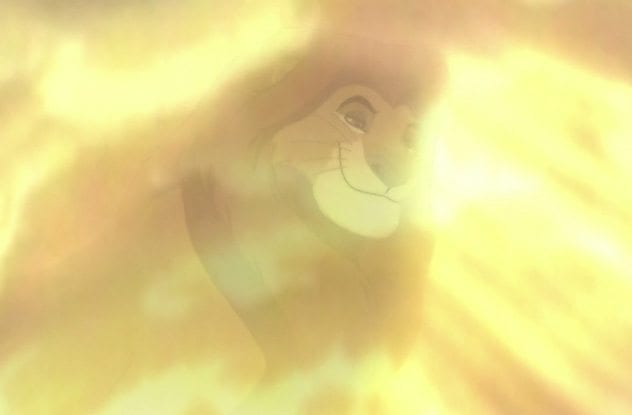 The sad death of Mufasa in The Lion King had some vengeful consequences if one is to believe a fan theory regarding the weather in the movie.

This theory surmises that after Mufasa was killed by Scar, he became a demi-god who could control the clouds. This first became evident when Mufasa molded the clouds to form a specter of himself to speak to his son Simba. Then the drought at Pride Rock is also said to have been Mufasa withholding rain to rack up the tension between the lions and Scar’s posse of hyenas.

After Scar is taken care of by Simba (the hyenas really), rain starts falling on Pride Rock, which was also Mufasa’s doing.

1Carl Died In The Beginning Of Up 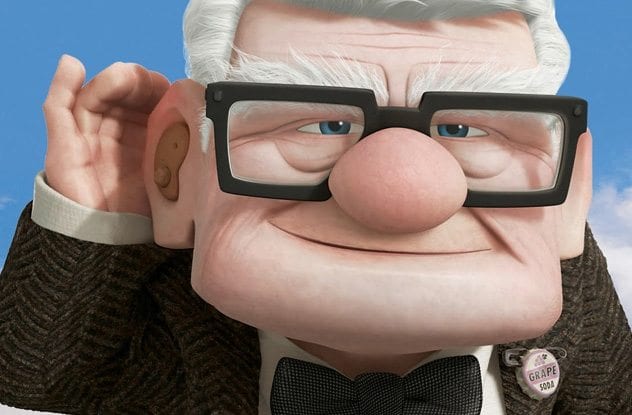 This sad fan theory has it that not only did Ellie die in the beginning of Up—her husband Carl died in his sleep shortly afterward after being notified that he has to give up their home and go live in a retirement home.

This means that the entire movie then visualizes Carl’s journey through the afterlife, with Russell acting as his guardian angel. Russell is meant to help Carl get used to his new surroundings and is thought to have taken the form of a child since Carl and Ellie never could have children.

His and Ellie’s home is the last of the physical realm that Carl is clinging to, while Paradise Falls is said to represent heaven.