While a human’s olfactory sense is significantly weaker than many animals’, we can still detect billions of different scents. And we expect things in nature to smell a certain way. Fruits smell sweet, flowers smell pleasant, and animals smell earthy. But some plants and animals smell nothing like we would expect, and their scent can be unexpectedly delicious or horribly foul.

10The Center Of The Galaxy Smells Like Raspberries Or Rum 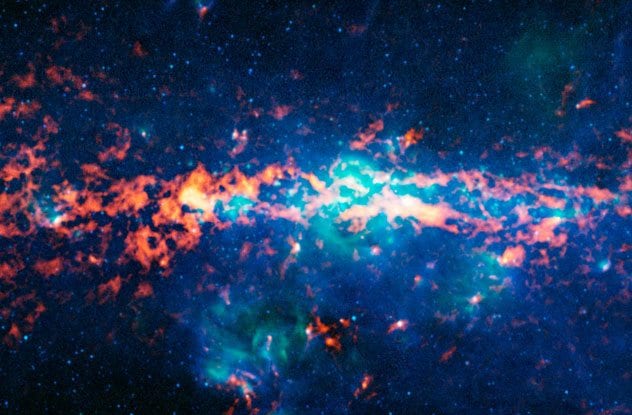 It’s well known the galaxy is made up of stars, dust, gas, black holes, and dark matter. But did you know that the galaxy has a delicious scent?

Thanks to the IRAM telescope in Spain, Max Plank Institute astronomers studying a dust cloud called Sagittarius B2 near the center of our Milky Way galaxy found the presence of the chemical ethyl formate (C3H6O2). This chemical gives raspberries their flavor and is also found in rum.

It wasn’t the only chemical found in this cloud near the center of the galaxy, though, so the scent isn’t pure. And you wouldn’t be able to enter the Milky Way to give it a sniff or a taste, unless you don’t require oxygen and have a spaceship with a few million years’ worth of time to travel from one end to the other. 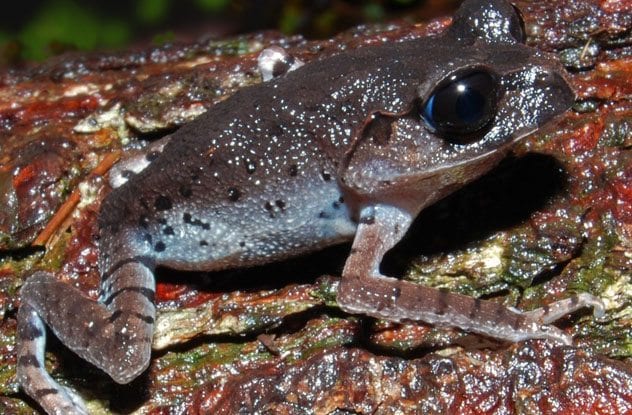 This toad has many distinguishing characteristics, from its large size (1.5–3 inches long) to its bright yellow eyes with catlike pupils. The Eastern Spadefoot Toad is tan or brown in coloring, and while it is named for the spade shape of its hind foot that it uses for digging, its most unusual feature is the fact that it smells distinctly like peanut butter.

Spadefoot toads spend most of their time underground but will materialize during heavy rains, when they hang out in wetland areas. Be careful trying to catch and sniff one of these toads, though: Some people have allergic reactions when touching them. If you mind developing symptoms like sneezing and red eyes, then get close enough to smell—but not to touch—these little guys.

8The Chocolate Flower Smells Like (You Guessed It) Chocolate 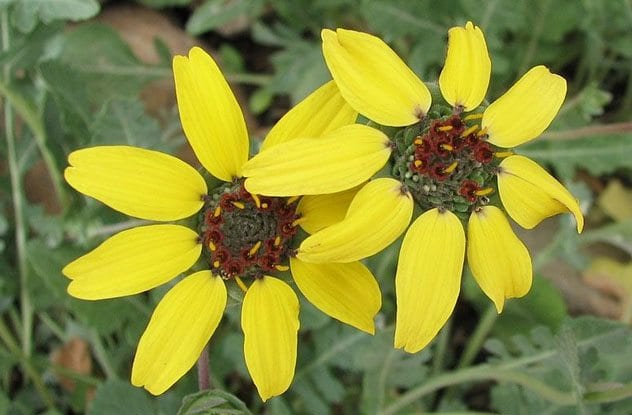 Berlandiera lyrata, also known as the chocolate flower, chocolate daisy, and green-eye lyre leaf, is a blooming perennial that grows to 1–2 feet. This daisy-like flower has yellow petals that surround a deep red center. When the petals are plucked, the delicious smell of chocolate is released.

The chocolatey aroma is also present in the leaves and branches of the plant. The chocolate flower grows in dry, rocky soil in Arizona, Texas, Colorado, Kansas, Oklahoma, New Mexico, and central Mexico. The sweet-smelling plant is most pungent on warm days and blooms year-round. 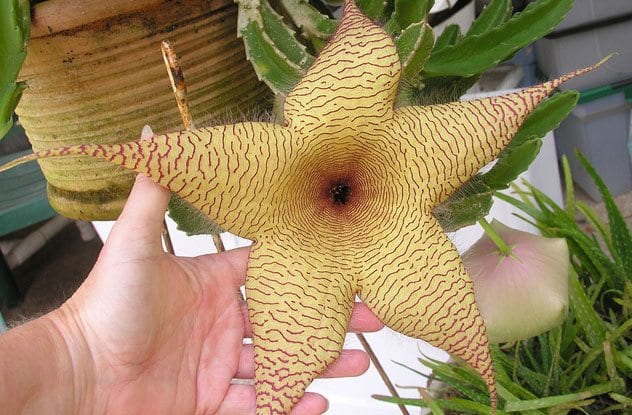 Stapelia gigantea, also called the starfish flower or carrion flower, looks like a cactus with a large star-shaped bloom that can reach 10–12 inches in length. The flower is tan and maroon in color, and its texture is described as feeling like suede or animal skin. Sweet-smelling plants attract pollinators like bees and butterflies, but the carrion flower does things a little differently. To attract its target audience, flies, the plant emits the scent that they like most—rotting flesh.

This horribly pungent plant is a member of the milkweed family, and in addition to its flowers, which bloom in autumn, it produces pods that contain fruit and seeds. It grows quickly and easily, and if you can’t stand the rotting meat smell, just cut off the flowers; the plant itself doesn’t have the foul odor. 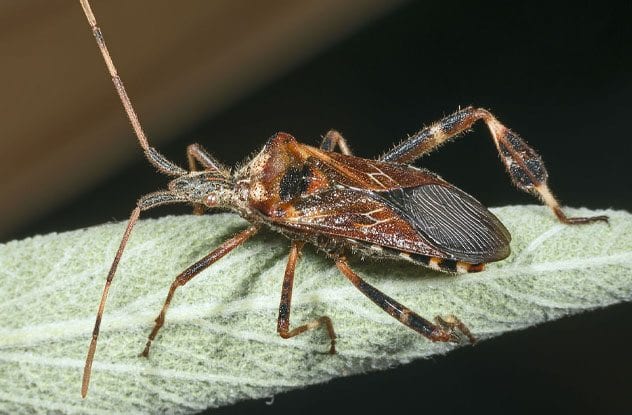 Leptoglossus occidentalis, or the western conifer seed bug, is a brown, black, and orange creature found throughout North America and Canada but is most prevalent in New York and Pennsylvania. Adult bugs reach about 0.75 inches in length and live in conifer trees, which produce cones such as pinecones. These bugs eat and lay their eggs on cone needles and do enough damage to affect the seed crop of many different kinds of fir and pine trees.

This pesky insect loves to find its way inside homes and other buildings during the winter through small gaps in doors and windows. When crushed, these bugs release a blue gunk and, oddly, the smell of apples. 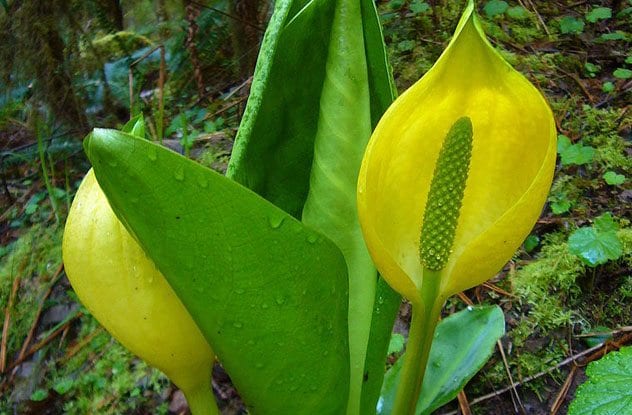 The western skunk cabbage or swamp lantern (scientific name Lysichiton americanum) is commonly found in the Pacific Northwest. It grows in swamps and other wet environments in partial sunlight. In March and April, the plant blooms with yellow flowers that smell horrible enough to attract the flies needed to pollinate the plant. The leaves of the plant develop after the flower and, when crushed, also smell distinctly like a skunk.

This large, perennial plant can reach approximately 5 feet in height and is poisonous when ingested by humans and other mammals. There is also an east coast version, the eastern skunk cabbage, which has purple flowers and the same rotting meat or skunky scent. 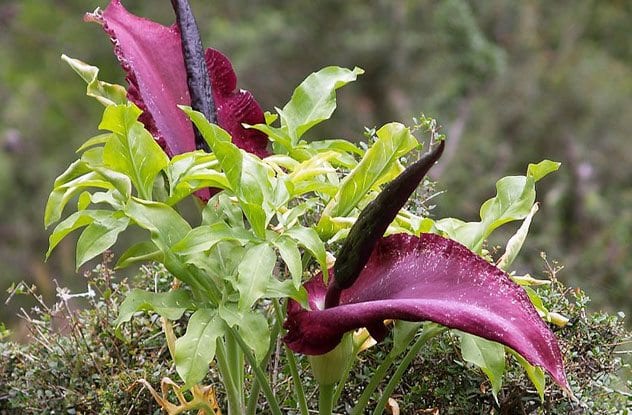 Dracunculus vulgaris, also known as voodoo lily, dragon arum, dragonwort, stink lily, or drakondia is native to Greece, Crete, Turkey, and the Balkans. It also currently grows in Spain, Italy, and North Africa, though it isn’t believed to be native to these areas. The plant requires moist soil and has light green leaves with dark purple or black flowers. The variety found in Crete can also have white blooms.

Like the other foul-smelling plants on this list, the voodoo lily attracts flies and some beetles with its rotten meat scent. Flies that land on the plant become trapped, so they pollenate and then are released the following day.

As its nicknames suggest, there is something sinister-looking about the plant. This, combined with its off-putting smell, repels most animals—which is a good thing, as it is highly poisonous. 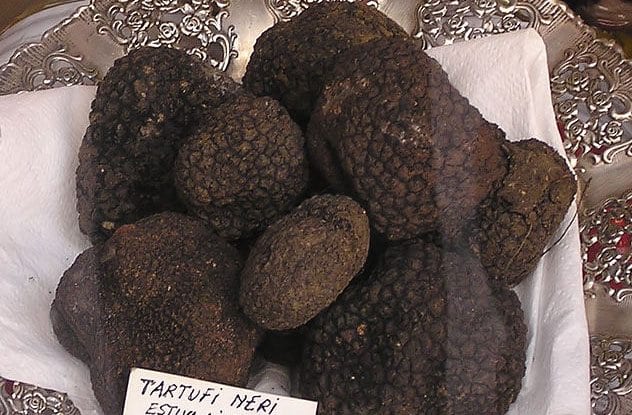 Truffles are found in France, Italy, North Africa, and the Middle East. In North America, truffles commonly grow in California and Oregon. Well-known as an expensive delicacy that can sell for anywhere from $150 (Oregon truffles) to $450 (French or Italian truffles) per pound, as well as far higher for rarer varieties, they grow underground and are harvested by female pigs or specially trained truffle dogs from September to May.

The white Alba truffle in Italy is especially known for its musky scent and strong flavor. Newly harvested truffles are eaten raw or lightly cooked to flavor other dishes. They are also commonly made into truffle oil or truffle butter. 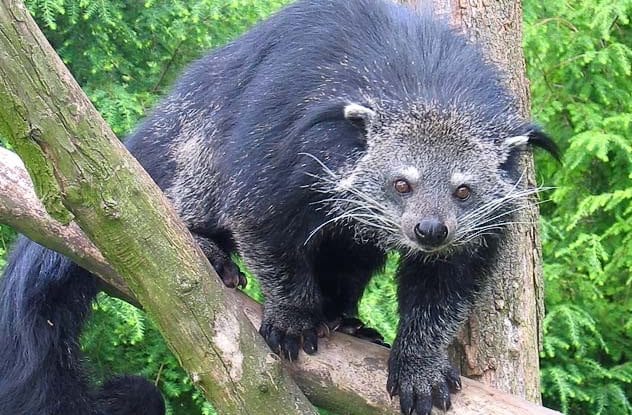 The binturong is a mammal native to the rain forests of Southeast Asia. Its nickname is the bearcat because it has the face of a cat and the body of a small bear, but it is related to the civet. Adults grow to 2–3 feet long and weigh 30–50 pounds. Females live approximately 15 years and males about 18.

This cute animal is normally black or dark brown with some white or silver coloring in its fur. It likes to hang out in trees eating fruit, and it gives off the pungent and unusual aroma of freshly buttered popcorn. Oil glands under its muscular tail produce the scent, which repels trespassers in its territory. So while it may smell delicious, the binturong is warning you to back off when it releases its movie theater aroma. 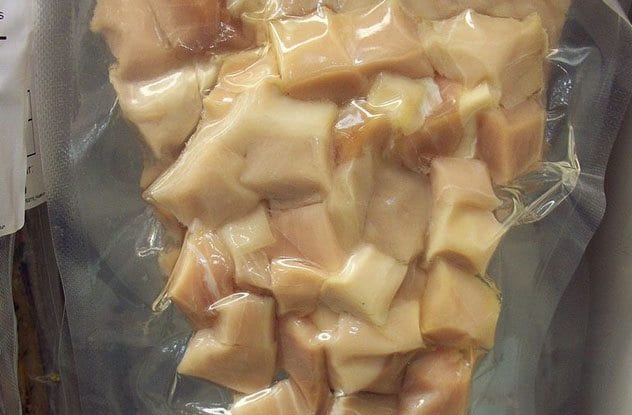 Hakarl, fermented shark meat, is a disgusting-smelling food that is also a delicacy in Iceland. Made by curing poisonous Greenland shark meat underground for months until it putrefies, this rotten meat smells (and many people say tastes) horrible.

The shark, which grows to about 24 feet, is buried under the sand anywhere from a month and a half to three months, so its poisonous liquids ooze out before it is hung up to dry for several more months. The meat becomes dry and brown when it is ready to eat, though it retains its harsh ammonia smell from the poisonous uric acid found in the shark. 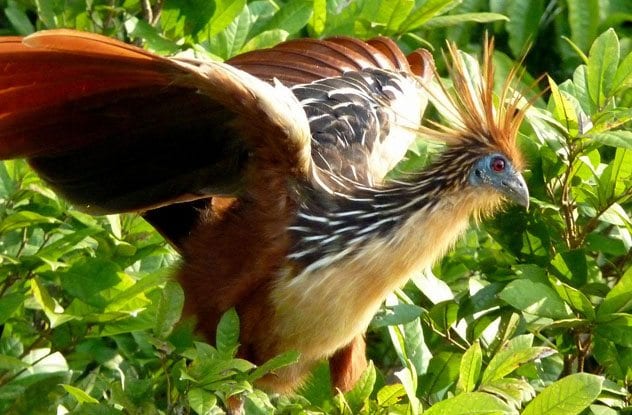 With a nickname like “stink bird,” you know the hoatzin, found in the rain forests of Ecuador, must be one smelly feathered friend. Described as stinking like cow manure or hay, this odd-looking and -smelling bird exclusively eats leaves. The brown, black, and white bird has a bright blue face and a crest on its head that looks like a Mohawk. They don’t fly that well, but they can swim and climb and these birds hang out together in families of about a dozen members.

The stink bird is the only known bird to have a foregut fermentation system, where bacteria is secreted to break down the leaves it eats, similar to the way cows and sheep digest their food. Another interesting fact about this unique creature is that baby hoatzin have an additional set of claws, which grow out of their wings and disappear after three months.

I am a high school teacher and adjunct college professor with a love for reading and writing.