Sometimes, nature has had enough of us killing ourselves and has just intervened. Throughout history, armies and navies have met in combat, only to find themselves battling storms and hurricanes instead.

Nature may separate the warring parties, forcing one or both to retreat. At other times, it delivers the decisive blow, causing a crushing defeat to one army or navy and favoring the other. Or it just prevents the larger force from decimating the smaller or less advantaged one. 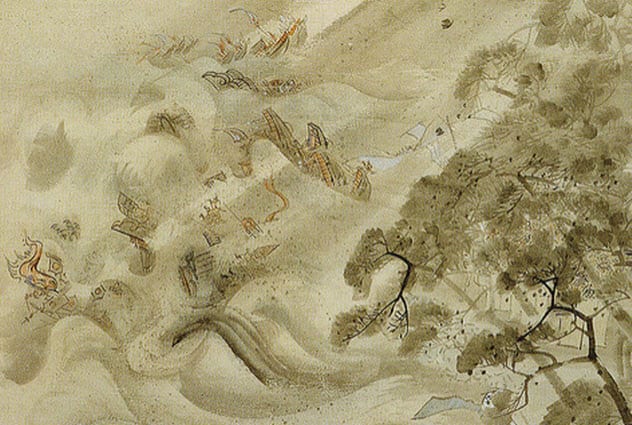 In 1274, a Mongol fleet of 500–900 vessels carrying 30,000–40,000 soldiers left China to attack and capture Japan. The ships anchored at Hakata Bay, Japan, anticipating an invasion, until they were destroyed by a typhoon. One-third of the fleet sank. About 13,000 soldiers drowned, forcing the survivors to retreat to China.

The undeterred Mongols returned in 1281 with 4,400 ships and 140,000 soldiers. This was far more than Japan’s 40,000 samurai and soldiers. The weather fought on Japan’s side again when another typhoon destroyed the invading fleet right before they attacked on August 15.

Half the Mongols died, and almost all the ships were destroyed. Only a few returned to China. The samurai also hunted and killed survivors. The Japanese were so impressed with the 1281 typhoon that they formed the word kamikaze (“divine wind”) to refer to a typhoon. They believed that the typhoons were sent by the gods.[1]

9 An Island Claimed By India And Bangladesh Slid Underwater 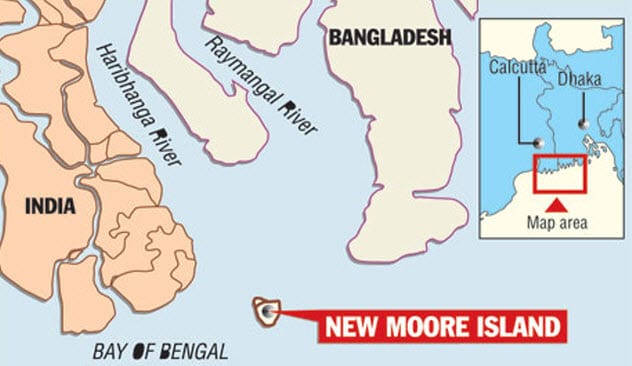 New Moore Island was a small, uninhabited piece of land tucked between India and Bangladesh. It was just 3.5 kilometers (2 mi) long, 3 kilometers (1.9 mi) wide, and barely 2 meters (7 ft) out of the water. The island was first discovered in 1974. However, some experts said back then that it had been around for 50 years.

India and Bangladesh both claimed the island after its discovery. In 1981, India even sent some ships and personnel from its Border Security Force to hoist a flag on the island. Things started to change in 1987 when satellite images showed that the island was slowly submerging. By 2010, it was gone.[2] 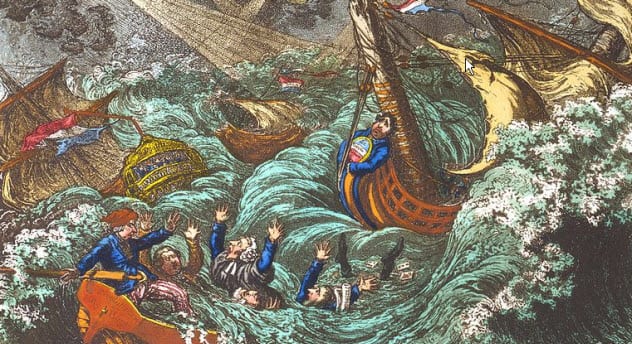 1796 was a turbulent year for British and French relations. Britain was funding some disgruntled aristocrats and rebels against the French crown. At the same time, Britain was subsidizing several allied nations in a war against France.

This prompted the French to plot revenge. Instead of invading Britain directly, France teamed with the Irish patriots who were fighting for independence from Britain. The idea was to help the Irish patriots defeat Britain. Once done, Ireland would have turned into a French ally and kept Britain at bay.

On December 15, 1796, a French force of 15,000 soldiers left France on several ships. Midway, the fleet ran into trouble after they were split by a terrible storm. Some made it to Bantry Bay, where the fleet had planned to rendezvous before the invasion. However, the attack was stalled because several ships—including the Fraternite which carried General Hoche, the commander of the operation—were still missing.

The fleet left a few days later over concerns that the weather was getting worse and the British might attack. General Hoche finally arrived with his ship. But he was informed that the French fleet had already arrived and then departed. He, too, left for France, ending the invasion.

Interestingly, an attempt by the Batavian Republic to invade Britain the following year was also thwarted by bad weather. The assault was suspended after a storm stopped the fleet from leaving port.[3] 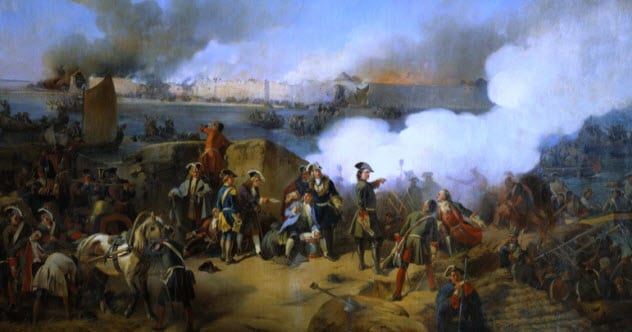 If military strategists were asked for one piece of advice about invading Russia, it would be to avoid an invasion right before winter. Otherwise, you had better get out before winter sets in. Several military commanders like Adolf Hitler and Napoleon Bonaparte found out the hard way after they were defeated by the harsh Russian winter.

Nobody remembers a third country that tried this—Sweden. In 1708, 40,000 Swedish soldiers invaded Russia as part of the Great Northern War of 1700–1721. At the time, the smaller but more professional Swedish army was famous for defeating larger opponents in battle. Facing defeat, the Russians fled deep into Russia and burned their villages.

This is called scorched earth, a tactic used by Russia to ensure that the enemy cannot live on whatever is left behind. At the same time, some Russian units ambushed Swedish resupply units, leaving the Swedes with insufficient supplies. The Great Frost of 1709 soon set in. It was the coldest winter in Europe in 500 years.

Lacking basic supplies, the Swedish troops froze to death. Approximately 2,000 died in one night, and half were dead by the time winter was over. The demoralized survivors attempted to destroy Russia as summer set in, but they were no match for Russia’s 80,000 soldiers. Ultimately, only 543 Swedish soldiers survived.[4] 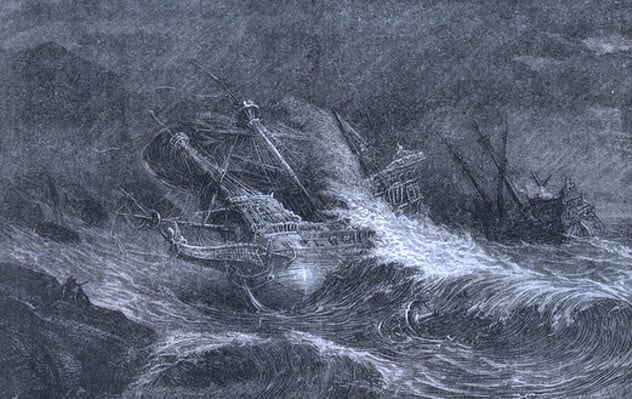 In 1588, King Philip II of Spain decided that he had had enough of the protestant Queen Elizabeth and decided to replace her with a Roman Catholic. So he ordered 130 ships to sail to Flanders to pick up 30,000 troops for the invasion.

The British got wind of the operation and intercepted the Spaniards just off the coast of Plymouth. Both navies engaged in several battles that all ended in a stalemate. The Spaniards were finally defeated when a storm threw their ships off course from Flanders and far into the ocean.

With the threat of diseases and low supplies, the Spaniards decided to abandon the war and return to Spain. The storm continued to batter the armada as it retreated, causing several ships to either sink or smash into the shore. Only 60 of the 130 ships returned to Spain, and 15,000 sailors were killed.[5]

5 Dust Storms Ended US Attempt To Free Hostages In Iran 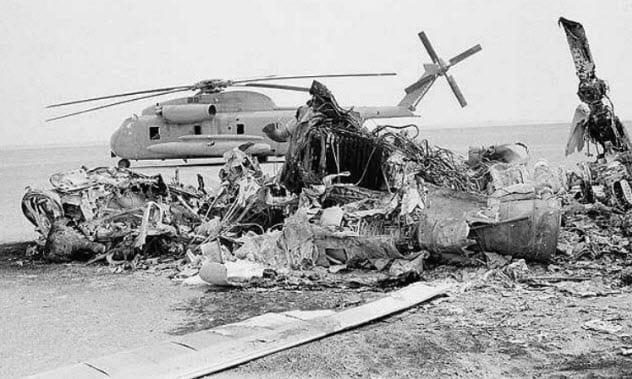 On November 4, 1979, Iranian students invaded the US Embassy in Tehran, taking 52 diplomats and embassy workers hostage. President Jimmy Carter later ordered a military operation to free the hostages. The US had no central special operations command at the time, so different units of the military were brought together for the invasion.

The operation was doomed from the start because the units never trained together. Problems began when the C-130 transport planes and RH-53D helicopters ran into sandstorms while flying to a rendezvouz point code-named “Desert One.” The planes flew through the storm. But the helicopters couldn’t, forcing them to return to base.

Six of eight helicopters later returned to Desert One, but one was damaged on landing. The operation was scrapped because five helicopters were not enough to achieve its objectives. All units were ordered back to base.

Unfortunately, a sandstorm obstructed the view of a C-130 plane taking off from Desert One. The plane slammed into a helicopter flying overhead, sending both crashing to the ground. Eight crewmen were killed. The remaining troops, helicopters, and planes hastily retreated.

The failure of the operation forced a change in US military doctrine. Individual arms of the military formed commands to coordinate special operations. The Department of Defense also created the United States Special Operations Command (USSOCOM) to coordinate operations among all US military special forces.[6]

4 Low Clouds, Rainfall, And Thunder Stopped Hitler From Destroying The Allies At Dunkirk 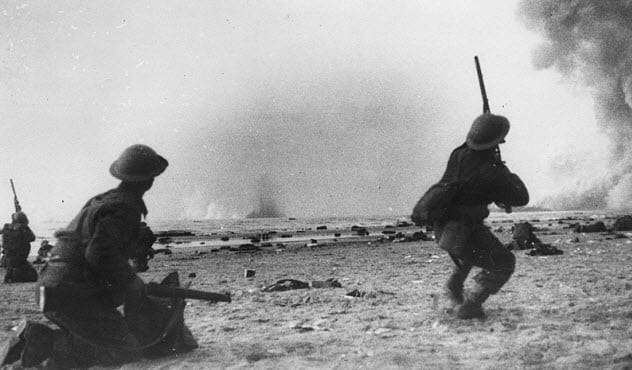 Allied troops stationed in France were no match for Nazi Germany during the 1940 invasion of France. The Allies fled to the port of Dunkirk after a series of defeats. The Germans could have moved in and decimated the Allies, but Hitler ordered them not to.

This gave the Allies enough time to begin a hasty retreat from Dunkirk on May 26. The next day, Field Marshal Walter von Brauchitsch convinced Hitler to resume the assault. But the Allies had assembled stronger defenses by the time the German tanks arrived, so Hitler ordered the tanks to stop and attack elsewhere. By June 4, over 338,000 British, French, and Belgian troops had fled Dunkirk for Britain.

The reason why Hitler stopped his army from decimating the Allies remains unclear. Some believe that Hitler expected the British to surrender. Others think that Reichsmarschall Hermann Goring, the commander of the Luftwaffe (Nazi Germany’s air force), had assured Hitler that the Luftwaffe could destroy the Allies without the army.

If the latter is true, then the Germans could not attack the Allies because low clouds, rainfall, and thunder stopped the Luftwaffe from conducting air strikes against Allied targets. The Luftwaffe attacked for two and a half days when the skies were clear, but it was not enough to make a difference.[7] 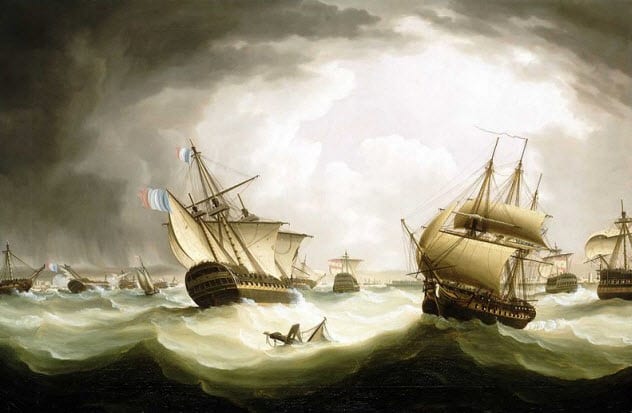 On October 21, 1805, the British Navy found itself in combat against the unified navies of Spain and France. The French and Spaniards were defeated in battle but continued fighting until a hurricane came along and decimated the remains of their fleet.

The French ship Fougueux was the first casualty of the hurricane. Captured in battle, it was being towed by the British ship Phoebe when the stormy seas caused the rope to snap. The ship slammed into some rocks, killing the French and British sailors on board. The French Redoutable was lost under similar circumstances the next day.

Several other French ships seized by the British were also at risk of sinking. French sailors on the Algesiras rebelled against their British captors. The British surrendered to these rebels because they did not want the Algesiras to sink.

Several French ships led by Captain Cosmao-Jerjulien tried fighting back but were limited by the fog and the storm. The British also had a hard time controlling their ships and the French ships under their command.

On October 24, the stormy seas forced British Admiral Collingwood to order the abandonment and destruction of all captured ships. Fourteen of the captured French and Spanish ships were destroyed.[8] 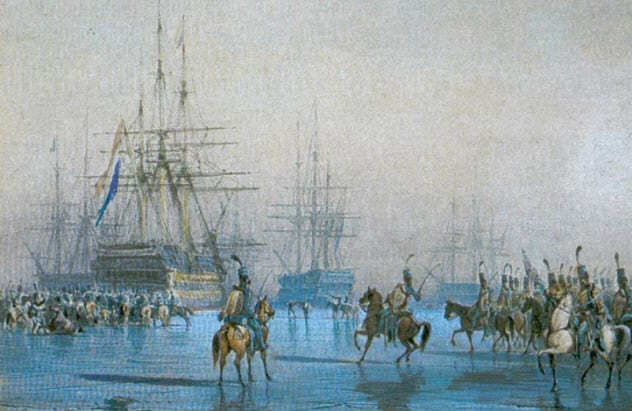 January 23, 1795, was one of the weirdest days in the history of warfare. A cavalry captured several warships. That should not even be possible because cavalries use horses and fight on land while navies use ships and fight on water.

The ships were captured in the Battle of Texel during the French Revolutionary Wars. A storm had caused a Dutch fleet to anchor in the strait of Marsdiep right next to Texel Island, Netherlands. The Dutch waited for the storm to pass, but they could not leave because the water around the shore was frozen.

However, reports indicate that the Dutch fleet was not a sitting duck and could have fought back. The Dutch had larger guns and numbers—14 ships in all. The French also needed ladders to climb onto the ships, but they did not have any. 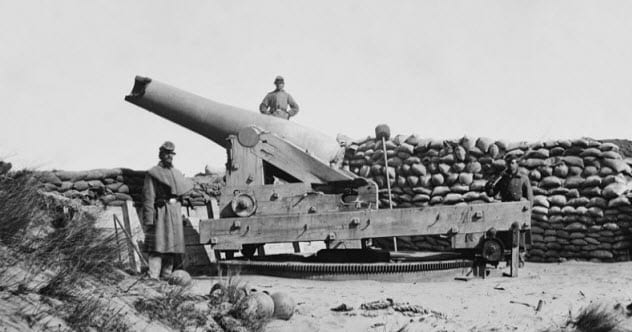 The First Battle of Fort Fisher was fought on December 23–27, 1864, when Union troops under the command of Major General Benjamin Butler and Rear Admiral David D. Porter tried to capture Fort Fisher from the Confederates.

At the time, all Confederate ports except Wilmington, North Carolina, were under Union control. The port at Wilmington was protected by Fort Fisher. The assault was delayed when heavy storms prevented the fleet from sailing. The Union ships finally set sail on December 14 and reached Fort Fisher on the December 19.

General Butler finally ordered a retreat when he heard another storm was brewing and Confederate Major General Robert Hoke’s unit was coming to defend the fort. However, the storm did not protect the Confederates for long. A week later, it was captured by a Union force led by Major General Alfred H. Terry.[10]

Read more intriguing stories about the bizarre relationship between nature and humans on 10 Interesting Effects Humans And Nature Have On Each Other and 10 Surprising Problems Solved By Nature.